When Confidentials originally published the below article in 2019, we were impressed by how many  independent businesses were integrating a zero-waste ethos into local services. But then the pandemic hit. The use of plastic packaging began to rocket again as people started to order online from supermarkets and the environmental crisis was no longer top of the agenda. So when we revisited this article we were delighted to discover that the vast majority of the businesses we talked to were still going and still popular. Read on for our survey of zero-waste North West, updated for 2021.

Some people will remember the "weigh and save" or "scoop and save" concept from long ago. The trendier term is "zero waste", though many prefer the plainer "refill shop". Whichever term you embrace, the concept of minimising plastic packaging by refilling existing containers is taking hold, thanks to the ever-scarier state of the planet. In practice, this means towers of dried goods in nifty pump dispensers, as well as cleaning products, drinks and more in shops that are spouting up all over the North West.

The refill revolution started (at least in the North West) in a shop in Ramsbottom. Like many people, Abbie Sellers, the owner of Plentiful (formerly Fulfilled), had become increasingly worried by the environmental impact of plastic packaging. She told Recycle for Greater Manchester: "Blue Planet II had us in tears, then there was the horrific turtle nose and straw video, the banning of microbeads, the 5p carrier bag charge, and now the huge amounts of pressure and small changes we’re seeing with big corporations. The #zerowaste movement is growing too. There are plastic-free shops popping up all over the UK. It’s a really exciting time, and I just hope it gets more and more mainstream."

Since then, a plethora of zero or low-waste options have mushroomed seemingly overnight. Interestingly they seem to be flourishing in towns with independent shopping rather than in the city centre. Ramsbottom, Prestwich, Heaton Mersey and more are all home to thriving small businesses that put their values at the centre of their retail models.

I asked Lucy Noone, a recent convert, about what inspired her to try and cut down and shop zero waste. She told me: "We realised just how much unnecessary packaging we created when our son came along. Beautifully wrapped gifts in ten layers of plastic, bubble wrap, laminated cardboard, tape. The house looked like a snowdrift everyday. We didn’t start out to do refills really, just to be a bit more conscious of how much plastic we consumed and threw away. We felt if we considered what we bought we might be able to nip it in the bud at source."

Lucy also told me that personal care and cleaning products are next on her hit list: "At the moment we are still working through the products we have in the house. We didn’t realise how many half bottles of shower gel and washing up liquid we had. When they’re gone we then decide what to do next. We’ve been using shampoo bars from Lush, which are a revelation, we smell like a posh hotel every day! Cleaning products have come next, we used to go to Costco so the huge tubs took some using up. Now we’ve done it though I think we will be a bit more organised. It’s really easy and the products we’ve found (ecover) smell great and work well."

Stretford Food Hall, as recommended by Lucy, seems to have the concept nailed. If food shopping is going to be slightly more complicated, and slightly more expensive (more on this later) then it might as well be what marketers term ‘an experience’. Something about the layout, studded with houseplants, meant the refill station was less utilitarian and more insta-chic. I felt kind of cool, even though I was only picking up some pulses. Yes those motivations might be superficial and selfish, but to be honest if I’m going to change my habits then it’s the stick of climate anxiety in combination with the carrot of millennial gloss (and a good coffee afterwards) that is most effective.

Annoyingly I had forgotten to bring containers (this would become a recurring theme) but they had brown papers bags on hand for the less prepared. The only downside was that one of the bags split as I was unpacking my shopping so, while I didn’t lose much from my hauls of brown rice and chickpeas, I would definitely recommend bringing your own, more robust, packaging.

Speaking of brown rice, let's compare the price in Tesco, just minutes up the road from Stretford Food Hall. An own-brand 1kg bag was £1.50, while the same amount would cost £1.80 from the Food Hall. A difference of 30p does add up over time but on the other hand, at Tesco you are committed to buying a kilo - here you can buy the exact amount you need which is really handy for spices and more specialist ingredients. While independent businesses are always going to be on the back foot when compared to the big retailers on price, some of the basics do work out favourably. The Good Life in Heaton Mersey, for example, deliberately sets out to price match Tesco because owner Shelley Brown believes it is crucial that this kind of shopping is accessible to everyone, not just the comfortably off.

Another issue is choice. These tiny shops can’t possibly compete with the supermarkets on choice can they? For instance, I did see one person moaning on Facebook about not being able to source organic pasta from a refill shop and my eyes nearly rolled out of my head. So when a few days later, browsing the One Small Step stall on Altrincham Market, I was delighted to see several types of organic pasta as well as more personal products such as toothpaste tablets and mooncups. It’s been my experience that there has been everything I wanted from all of the refill shops I visited, just not necessarily in the same shop.

Perhaps unsurprisingly, given their ethos, refill shops seem to quickly become a fixture in the community too. When I popped into Village Greens in Prestwich, customers were clearly regulars who had dropped in for a chat as well as their shopping. The shop is often a hub for community initiatives, for instance currently collecting used T-shirts for Prestwich Arts Festival. They are also active on social media too, announcing giveaways and samples that are quickly snapped up by locals.

The pandemic posed a huge problems for refill shops as the trend towards shopping locally from several different shops was reversed and people began getting one big shop from a supermarket again in order to minimise risk. Single-use plastic packaging also became seen as more hygienic. However, last month, over one hundred scientists released a statement confirming that single-use plastic is no safer than any other material and reusables are perfectly safe to use during COVID-19, provided they are cleaned properly.

Becky Whitehead, of No Plastic - Fantastic, which opened in May 2021 (so right in the middle of lockdown) told me that there hadn't been any issues surrounding hygiene. In fact, refill shops have very strict hygiene regulations already so they were ahead of the game on that. "It's more the convenience factor," she said. "We've had loads of support from locals and even people travelling to shop here. People have really embraced it."

In dipping my toe into the world of zero-waste shopping (and not fully succeeding most of the time), I’ve learned that preparation, organisation and dedication are key – qualities I do not possess in great measure even on a good day - but being a bit flaky seems like a weak excuse not to do my bit.

I’ve also realised that a lot of people are interested in zero-waste shopping – one of the most frequent comments I heard was "I wish a refill shop would open near me, then I’d go all the time." Supermarkets are slowly taking note of this appetite, but it’s difficult to turn a juggernaut on a sixpence and consumers are wary of big businesses trying to appear on trend without really changing their practices. One small retailer told the Guardian that if supermarkets do ever get really good at it she will happily give up and do something else because the battle will have been won. But I think she will be in business for a long time yet. 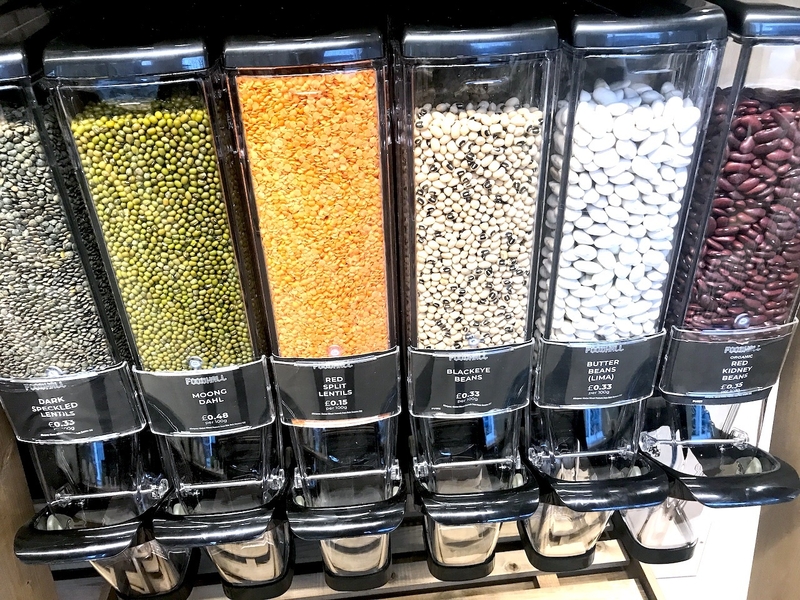 Want Not Waste University of Manchester

Laundry and personal care refills only