Leisure mega-schemes in the news this week. First off, we hear of progress being made on the development of an indoor arena a hop, skip and a jump from the Etihad Stadium. Wam, bam, here are the projected stats folks; total cost £300m-£350m, 23,500 capacity, 3000 construction jobs created, 10,000 floor standing area. It will be the biggest such arena in Europe. The developer is the American entertainment giant Oak View Group, the architects are Populous. Not that the scheme is universally popular as our article, here, underlined. John Sharkey, executive vice-president of SMG Europe and the operator of the city centre Manchester Arena is incensed. He would be wouldn’t he, but if top shows are taken from the city centre venue then it will hit activity particularly in retail and mid-range dining. At the same time, a new Arena in east Manchester will push tens of thousands of people into cars in a drive-in drive-out peripheral location. Isn’t that a bit old-fashioned?

Making a massive splash at the Trafford Centre

The other leisure mega-structure is Therme which is set to gain planning approval. This comes from Therme Manchester with Peel L&P and is a 28-acre well-being resort at EventCity opposite the Trafford Centre. Again we’re talking big numbers with four separate areas of 700,000 sq ft and even a 38,000 sq ft lake – the size of the whole of St Peter’s Square, trams and all. The latter is apt as the idea is to create a tropical-themed warm water leisure park. There will be swimming pools, big slides, family fun, quiet relaxation areas, saunas plus water-based treatment bits and bobs. It will be ‘the world’s most advanced wellbeing resort, accessible to all, embodying a perfect interplay of nature, technology and culture.’ You betcha. If Confidential had to choose between the two proposed mega-structures, give us Therme any day, it sounds so much fun. Maybe if John Sharkey ever gets fed up of SMG he could head up Therme, his surname is perfect for a water-themed leisure park.

Meanwhile, down the Ship Canal at MediaCity the development’s first Build-to-Rent development, The Green Rooms, has opened its doors to residents. The development is owned by IP Investment Management with AmroLiving as onsite building operator and Peel L&P as developer. The Green Rooms sits over the water from the ITV site of Coronation Street. It’s 19-storeys with 238 units offering ‘state-of-the-art amenities for renters to enjoy in the heart of the creative, tech and digital destination.’ Apparently the lobby will contain the UK’s largest contemporary fresco (really?). This comes from artists Aster Muro assisted by four foundation students from Manchester School of Art. Please no bees, folks. The mural is promising, it’s a shame then that externally the building by AHR Architects looks so dull.

Speaking of dull, Barratt Homes have been involved in our favourite pointless exercise of the week in which they spent some time re-imagining some of 'the UK’s most interesting derelict spaces'. They wrote to us saying: ‘With demand for city-centre homes still strong, it’s no surprise that smaller homes are becoming more and more popular. Modular housing has had a lot of attention this year which is why we conceptualised a modular apartment to make better use of one of Manchester’s iconic buildings, The Victoria Arches.’ These splendidly derelict former workspaces converted to WWII bomb shelters should be opened up to the public not as Barratt have visualised, vandalised of all the glorious and truly evocative original fixtures and fittings and turned into the very epitome of blandness.

Let’s get to the flowers at RHS

This is better. Let’s talk about a scheme which will enhance enjoyment of our fine metropolis. Before the £30m first phase of RHS Bridgewater opens in July how people get to it needs to be thought through. Thus, Salford City Council have put forward (a little late in the day) planning for 540,000 sq ft of road upgrades and other transport infrastructure including an additional canal towpath, along with walkways, cycleways and road crossings to improve links to the site. The full value of the project from the RHS will be £160m over a ten-year period running from 2015. A new beautiful gardens and a major water leisure centre (Therme) within about three miles of each other makes one worried about how the transport infrastructure might cope. Having said that it is clear things are hotting up for tourism on the west side of the conurbation, and more tourists means more dosh for the regional economy.

Excelsior Works is a very good new development. Ok, it's a bit taller than the older mills nearby but from its name to the way it communicates with those veterans it fits the Britannia Basin mould like a glove. The name comes from John Heywood's nineteenth century Excelsior Steam Printing and Book Binding works, which formerly occupied the site. There are 108 one and two bedroom apartments, designed by architect Tim Groom. The interior designer, YOUTH Studio, has opted for the moody, inky tones of the printing presses to create a relaxed ambience. There's a cracking communal roof terrace with city views and, below, a canal side location on Hulme Hall Road. Rightmove has one bedroom flats from £195k.

Read more - Does the public really have the right to reply if they disagree with Manchester City Council? 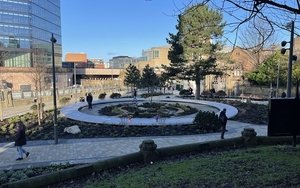 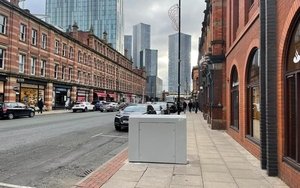 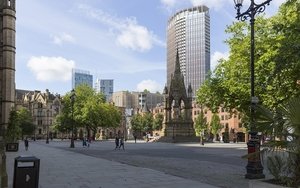 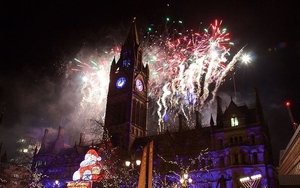