Rosa’s Thai Café is open on Deansgate and that simple fact is worthy of note as the food and drink industry nervously edges back into action.

Rosa’s is a pleasant enough place, with smiling staff and food that is good without hitting the heights. The location was previously the site of one of those burger bars that arrived in a rush in 2014. I think the burger place was called ‘Totally Generic Burger Venture Pretending To Be Hipster’. Yeah, that was it. Or maybe it was ‘What’s The Bloody Point?”

The interior has muted tones and no-nonsense furniture. The food could almost be described likewise.

Rosa’s was riding a tide of Thai/Vietnamese/Korean openings in the city, before that tide went out with everything else on Monday 23 March. This was just a few months after Rosa's opened and while it was still finding its feet. Of course, new openings are still around, as the recent review of the Vietnamese restaurant with the world’s most challenging name, Pho Cue, attests.

Pho Cue is a character-filled one-off from a local. Rosa’s is a chain and thus offers the benefit of consistency and well-oiled systems but suffers from that certain whiff you always get from a chain outlet. You can sense an area manager’s presence banging a finger against a page saying: 'What you’ve done here is not in the manual.' The website, by the way, gives no indication of who Rosa is but she sounds nice.

The interior has muted tones and no-nonsense furniture. The food could almost be described likewise. An exception were some chicken satay skewers (£6.80) which were tremendous. The word used on the menu was ‘succulent’ and these were just that - tender, juicy, full of flavour. Good looking things as well.

Black pepper beef (£10) was good looking too. Filling, good stock, but oddly lacking in oomph despite the advertised mixed chillies and two red chilli menu rating. Massaman chicken (£11.50) is, of course, meant to be a mild curry dish so this was better, subtle almost, bulked up with spuds and cashew nuts. Jasmine rice (£2.80) was well-timed but steamed veg (£2.50) was over-steamed.

Rosa’s is not a destination venue, it’s an ‘I’m hungry and passing' kind of place. Nothing wrong with that and everything right about coming into the city centre, spending money with businesses which have been closed for months – if you can still afford it, that is.

What is certain is the future’s going to be parlous for some chain establishments at this level and price-range in city centres - given the almost complete absence of the office market. For a starter, main and side the price before drinks was £19.60. Not exactly budget. You can find more distinctive Far Eastern food in Chinatown and elsewhere. Siam Smiles down on Deansgate Mews is a case in point.

Carluccio's - with similar prices - caught a cold and disappeared under Coronavirus pressure. As have several other mid-level chains including The Handmade Burger Co. which - joking about burger joints names aside - once occupied Rosa’s site on Deansgate. Of course, this was partly down to poor property negotiation over rents and other costs that were too high.

Will the market divide between special occasion establishments and very low-cost places in city centres? Manchester’s strength has always been variety. All bases covered, all boxes ticked. So let’s hope not. The months up to January will tell us which way the wind is blowing. 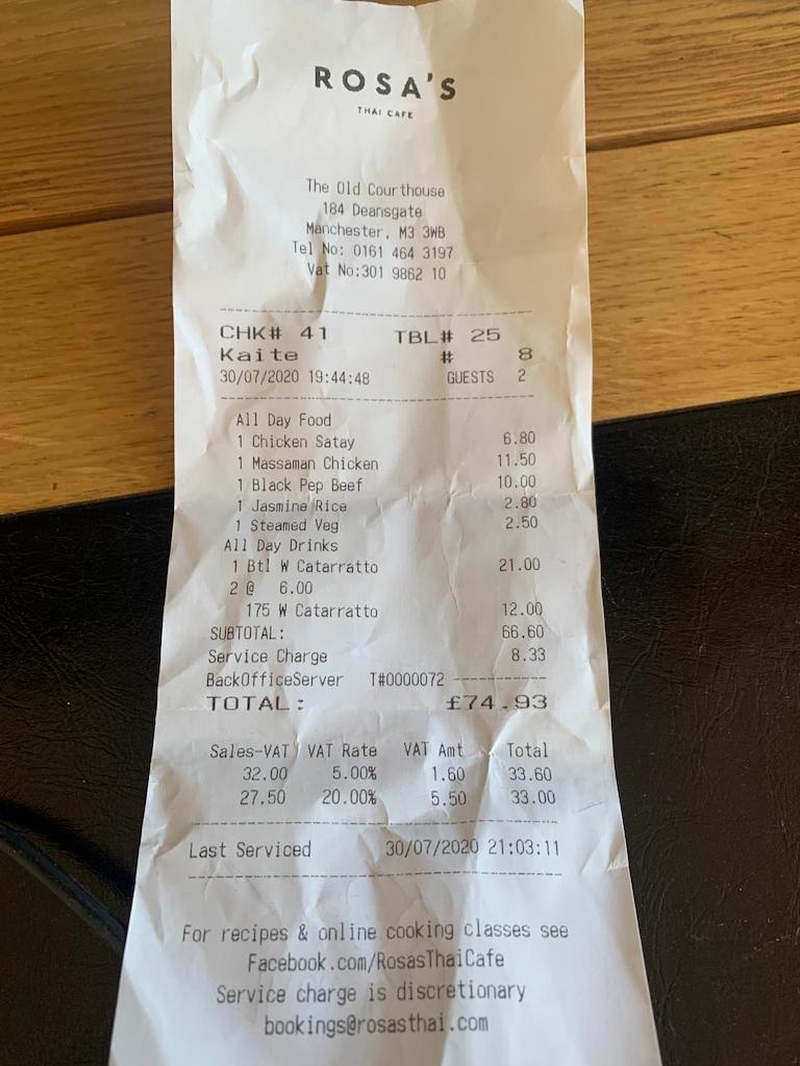