The work of the police is never far from the headlines and this seems to be doubly true in Manchester. While reports of poor leadership and mismanagement within GMP circulate, activists criticise police handling of recent protests throughout the city.

One aspect of policing that needs continual monitoring and rethinking is how police officers interact with young people. When it was reported earlier this year that the Mayor had committed to 20 new police officers in schools across Greater Manchester, many were concerned that schools were becoming less about education and support, and more about social control.

Kids of Colour, a community interest group that provides support to young people of colour in Manchester and beyond, were at the forefront of questioning this approach. Project officer Mea Aitken explains why they are campaigning to remove police officers from schools.

At Kids of Colour, our aim has always been to put the needs of the community and young people of colour first. The project was founded in 2018 and back then things looked very different. Then, it was led by the founder Roxy Legane and focused on providing a platform for young people of colour to talk about their experience of race and racism through YouTube videos.

Now, we are a small team of staff and while our priority is still amplifying the voices and lived experience of young people, we also run anti-racist workshops, hold safe spaces for young PoC and advocate and campaign with and for them.

Something that has taken on more of a focus in the past year is the No Police in Schools campaign, which is a campaign that we have been working on collaboratively with the Northern Police Monitoring Project.

The No Police In Schools campaign

This campaign was a response to the decision made by the Greater Manchester Combined Authority to introduce 20 more police officers into schools in Manchester in the academic year 2020/21. As a project which works with young people of colour, we are very aware of issues of the over-policing that communities of colour face and often the anxiety that young people of colour experience when police are present. We were concerned that young people would now not only be over-policed in the streets but also in their schools.

The decision prompted us to write a report on the matter entitled Decriminalise the Classroom: A Community Response to Police in Greater Manchester’s schools. We collected this data in June 2020 using a survey that collected 554 responses from students, teachers, parents and community members regarding school-based police officers (SBPOs), supporting the community to express their feelings and experiences about police in schools.

A common theme that we saw in this data was the over-policing and the labelling of students from marginalised groups. For example, there were instances of black students being labelled as "looking like they were in a gang" and aggressive sexual language being used to describe female students such as "sluts".

More instances such as interviews being conducted by the SBPO without parents' prior knowledge and other instances of aggressive behaviour being displayed by the onsite officers toward students.

The effect of police in schools

It is inevitable that these interactions will have an effect on the dynamics in schools and what is particularly concerning is how this will impact the well-being and educational environment for students. Not only could this labelling potentially lead to a lack of self-worth for students but it could also lead to a process of criminalisation.

We are already aware of the different experiences that people of colour have in the education system versus their white middle-class counterparts. We are aware that black and brown students are labelled as underachievers and disruptive whilst also not being represented in the curriculum as well as there being a lack of black and brown role models in the teaching staff. Taking all of these things into consideration, it is inevitable that school begins to feel like a hostile environment for these students.

Since the report has been released, it has been great to see more people speaking out and using the report to challenge these implementations. However, what has been difficult throughout this process has been the reluctance of members of the local government, more specifically the Mayor’s office, to engage in the issues we have presented to them. Since the Mayor’s initial decision to introduce these 20 new officers into schools, we have presented his office with extensive evidence to back up how damaging this decision will be for students of colour and how the actions of existing school-based police officers are reflective of wider issues of institutional racism. Despite this, there has been hesitation to engage with our research and to explicitly label the behaviour of the police, in and outside of schools, as racist.

Our campaign has continued to build traction and support, and we are so thankful to all those who have joined with us, including teachers from the National Education Union, to call for no police in schools. 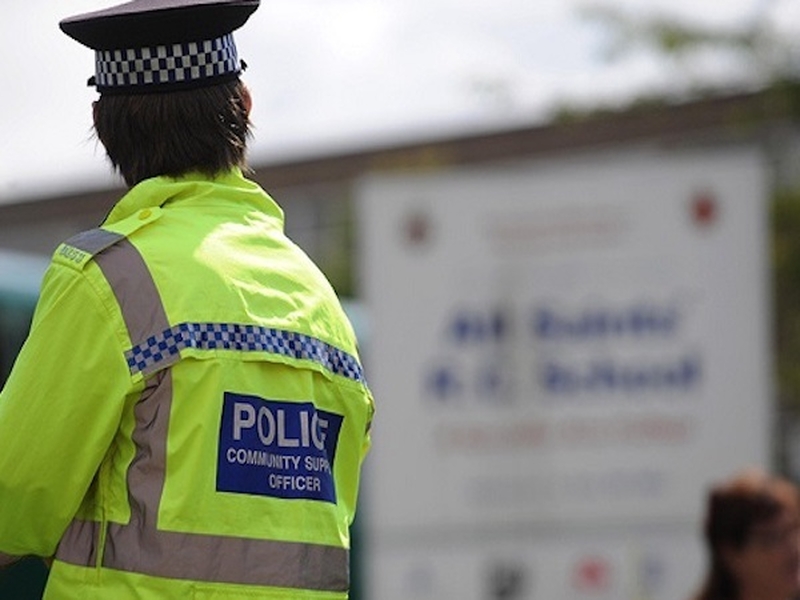 Confidentials asked Andy Burnham if the policy that places officers in certain schools was up for review. He responded:

"I'm aware of the concern that groups are expressing about this. The truth of the matter is, it's not a new policy. This is a long-standing Greater Manchester Police policy. I was a supporter of it because it wasn't about enforcement, it was more about building a relationship between the officer and young people in school, and I think that sometimes it's been misunderstood within the context of this policy.

"The reason why the policy has come back into the spotlight is that Manchester headteachers were asking for access to school-based police officers on the back of some of the concerns they had about some of the youth-related crime.

"To respond to the concerns that people have expressed, we are saying that it has to be done with consent. There would always be a request from a headteacher first, that would trigger the process. Then there would have to have support from students, parents and the wider community. We built that safeguard in because this policy is not to criminalise people, it's actually to build trust in police, build a relationship, a dialogue.

"So I'm prepared to maintain a dialogue on it now, but it very much is the case that would only be done with consent and support of the wider parents and student population and indeed the local community.

"But this is a policy where I will be more than ready for our race equality panel to take on board the research, and the concern of some of the campaign groups on this and make recommendations to me. We're not saying that we are dogmatically sticking to policies if things are causing a negative reaction in communities. The whole point of having a race equality panel is to challenge some of these policies and to create a space for a rethink if necessary."

The Mayor's response has been edited and condensed for clarity. The Greater Manchester Race Equality panel was set up in 2020 and it is due to report to the Mayor this spring.

As a project, we acknowledge the mayor's stance on police in schools. We are aware that it is not a new policy but it is certainly a policy that needs changing. We also have evidence that shows that community members, students and parents are not being consulted before the introduction of a school-based police officer and that, contrary to the mayor's beliefs, these officers do act as enforcers.

Whilst it is positive to hear that the campaign is on his radar, we hope that in the future the priority for the mayor is protecting the well-being of students, particularly those from marginalised groups who are being subject to over-policing at the hands of school-based police officers and that he fully engages in the research that has already been done about the negative impact of having police in schools.

Interview: Laura Evans - 'Policing is the basic foundation of everything'
What you say
Previous Article Next Article
Read Next
● / News & Comment