A LITTLE over three years ago Mike Ingall from Allied London, the developer behind Spinningfields, rushed into the office.

The half chicken at £9.95 was good again, worth a rend and a tear, the flesh moist not dry. The fries that came with it were dandy.

He was carrying an architectural model.

"What do you think of this?" he said.

"It is and I'm going to build it in Spinningfields," he said.

"Really, but oast houses aren't really very Lancashire. They're from Kent," I said.

But Mike Ingall had that look in his eye. He was a developer. He was not to be denied.

Oast (to rhyme with coast) houses are where hops, which flavour beer, are dried. You can only grow hops properly in the southern counties of England, hence my Kent comment. 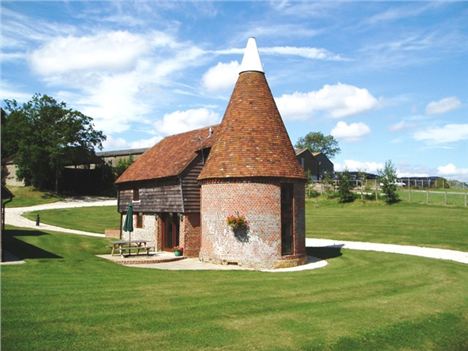 So when it turned out the operator of Ingall's dream was going to be Living Ventures, well-known for beautiful boys and girls twizzling cocktails and juggling fizz-bomb lagers, it was disconcerting.

"It might be a fake oast house but you'll have to serve real ale," I said. "Otherwise the whole project will be utterly ridiculous."

And lo! For the first time since Living Ventures started seeding 'lifestyle' bars across the North West and the rest of the country, they went against their own glamorous grain and turned to ale.

Two months after opening Confidential enquired and found ale was out selling lagers at least two to one in the Oast House. It might have been three to one, I've forgotten.

Gordo and I popped in on a recent Friday for food but first delighted in a pint of Loweswater Gold, one of four real ales in the Oast House (along with over forty bottled beers).

Loweswater Gold is 4.3%, brewed in Cumbria, and is a refreshing, golden, almost citrusy ale that each time I drink makes me feel more intelligent.

This time, because I'd become more intelligent, I took a picture through the glass to demonstrate how wonderfully clear the brew is. The beer is beautifully kept by Living Ventures' brew meister Warren McCoubrey. 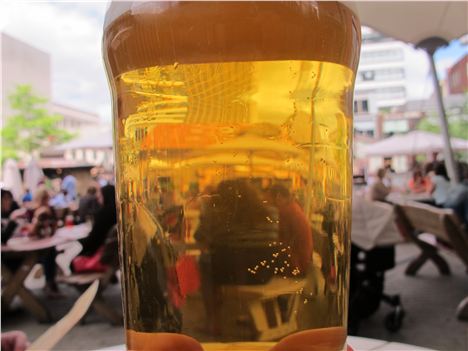 Alice, through the beer glass

The kitchen at the Oast House is open to the elements and stands apart from the main building. It is a thing of fire so if it's hot it's barbequed. Gordo ordered a cold platter first and then we had the lamb burger and the half chicken with corn on the cob as a side.

The floaty Scotch eggs and the Coronation Chicken were easily the best things on the platter (£9.75), which otherwise was functional rather than inspirational. Still, it got the meal off to a fulsome start and stopped me looking at everything through my pint glass. 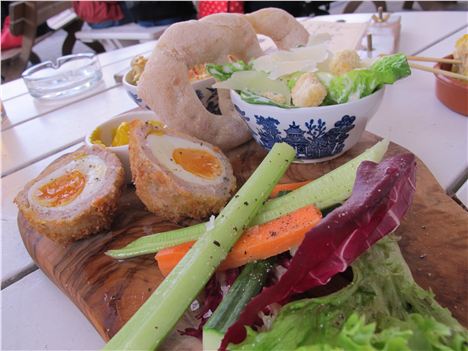 The corn on cob pieces were beautifully barbequed, juicy and satisfying all round. Love these. They've been a staple at the Oast House since it opened.

The half chicken at £9.95 was good again, worth a rend and a tear, the flesh moist not dry. The fries that accompanied it were dandy. The 'hot piri piri' sauce that came with it was useless, not hot and tasting soapy. Re-write that recipe someone. 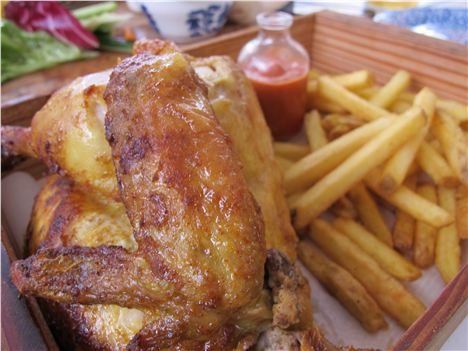 Half a chicken ready and willing

Gordo's lamb burger was fine but a tad overdone.

Of course the Oast House 'thing' is 'the hanging kebab'. A recent sampling of a dripping beef number (£12.95) hanging from its hook like the world's biggest meat earring was as jolly as ever. Gimmick food, but entirely full of flavour too. A veggie told me they adore the halloumi version. 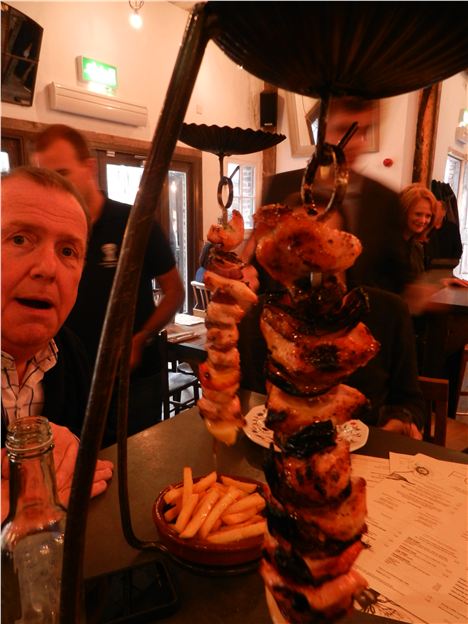 A hanging kebab and a big faced man

Keeping the fun theme going, for puddings there's a strawberry and marshmallow kebab (£4.95) or a whipped ice cream in a cone, amongst other dishes. The latter at £1.30 comes with a sauce of your choice and is a good value way to finish off the meal for those with a sweet tooth.

On my recent visit I went for another Loweswater Gold instead. Who needs dessert when there's nectar available behind the bar? 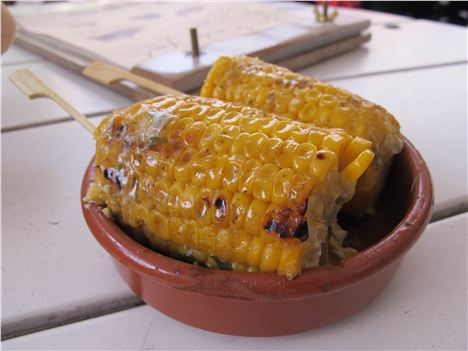 The Oast House is a fine place for harmless scran, decent drinks and people watching. It's not a destination place for an evening meal, nor does it pretend to be. The food is for most punters probably a side-show to the chat and the booze - although the menu could do with a refreshing for the regular punter, it doesn't seem to have changed for a year or two.

The Oast House isn't bad for lunch though, especially office folk, the food comes quickly and isn't budget busting. In warm weather it's very pleasant on that vast terrace. On weekends there's usually an act on stage out there.

Inside, the bric-a-brac rustic decor can become gruesomely hot with all the bodies, but if middle of the road live music is your thing then there's plenty of that on weekends nights. 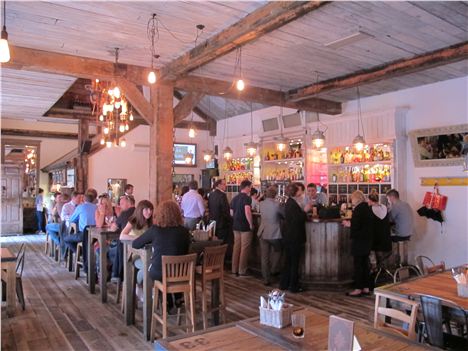 Inside the Oast House

So has Ingall's vision worked? In terms of footfall his collaboration with Living Ventures has completely triumphed. This is an easy-going place that attracts punters to it like bees to honey - indeed bees, Manchester bees, the symbol of the city, are all over the Oast House, on the menu and in the decoration.

Of course, I've had architectural purists raise their eyebrows about the building.

The Oast House is a joke building. Fakery. Just like the Trafford Centre, it's a blast of Disney. But instead of all the ersatz, pastiche, chicanery melting your eyeballs as it does after a while in the Trafford Centre, the Oast House is an island of silliness adrift in an area of sober offices and public buildings. Like a jestor pulling a daft face amongst the straight-faced courtiers, it's a welcome relief. 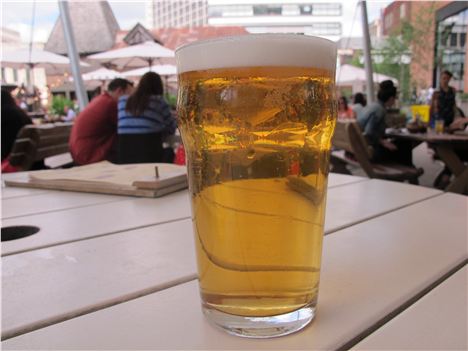 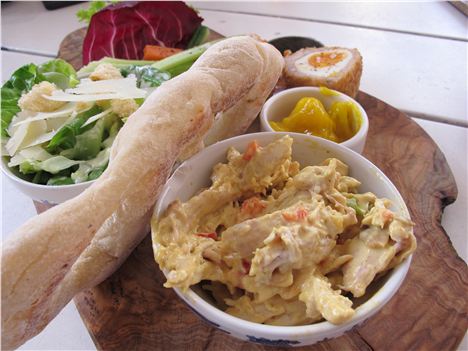 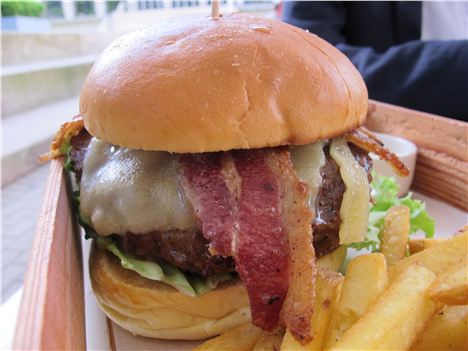 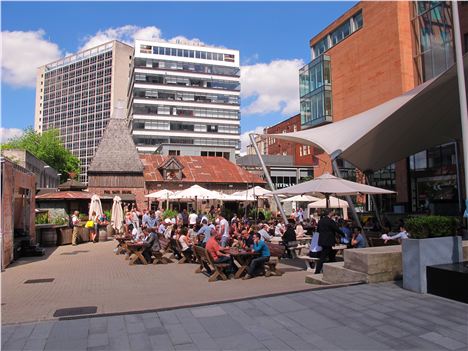