If you’re the type of person who has given their sourdough starter a name or spends their day boiling up huge pans of beef bones in order to reduce it down to one cup of intensely flavoured stock, the signs are that you’re missing fine dining in restaurants and that lockdown 2.0 is going to hit you hard.

Great news then that some of the region’s top chef’s have been busy behind the scenes creating cook at home boxes for you too impress, er, yourself and your bubble.

Here are a few of the most recently released cook at home kits and hampers from Michelin starred chefs based in the North available for UK-wide delivery. A few have also put together special limited edition seasonal gift boxes and festive treats. 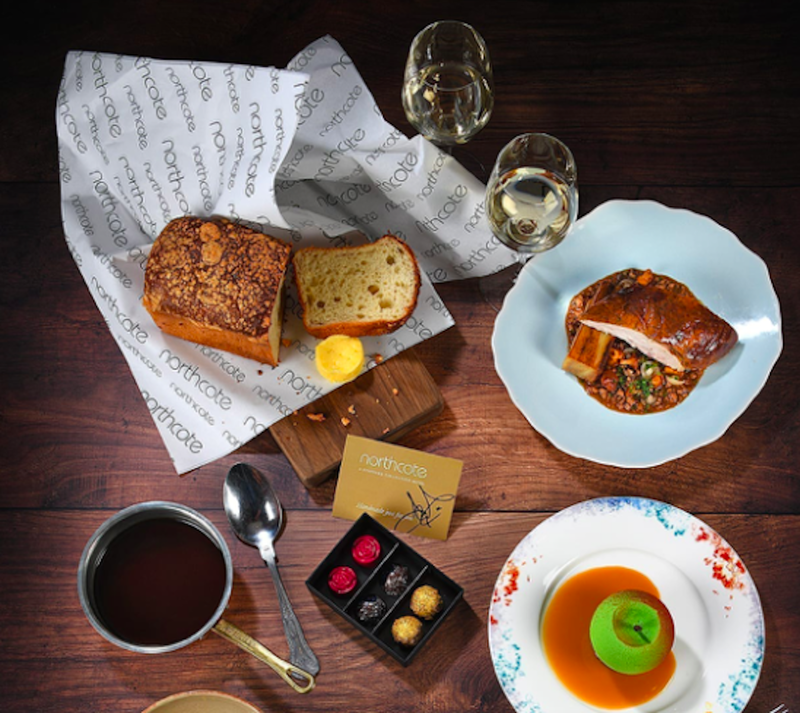 These ‘gourmet boxes’ provide the opportunity to experience special menus designed by Lisa Goodwin-Allen, executive chef of Northcote in Lancashire, which has held a Michelin star for over 20 years.

There are two boxes to choose from: the seasonal four course Autumn Gourmet Box for Two (£90 per box) or the Classic Menu Box for Two (£105 per box.) Now you can almost effortlessly knock up dishes such as roast chicken with truffled brioche-crusted leg Bolognese, or aged venison Wellington without working up too much of a sweat. Both boxes include a few extras such as Northcote’s famous Lancashire cheese loaf and six hand-crafted chocolates.

Northcote at Home Gourmet Box Nationwide Delivery is available on Thursdays and Fridays – orders open at noon on a Tuesday and close at 10am on Friday for deliveries the following week. Boxes may sell out before orders close, as there are a limited number available each day. Orders open at noon on Tuesday for 19th and 20th November delivery. 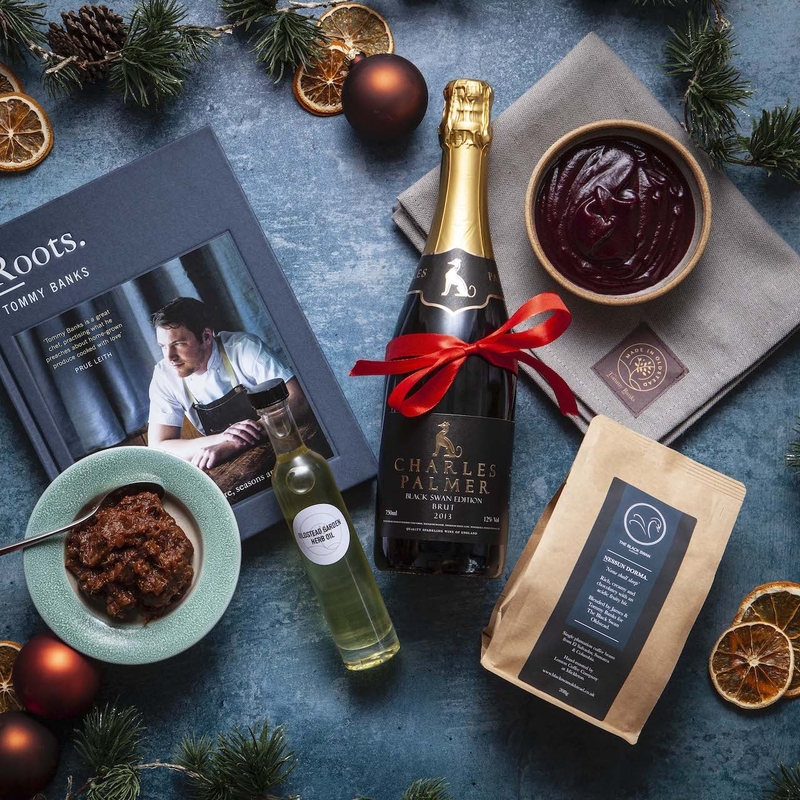 Tommy Banks, the chef behind Michelin-starred The Black Swan (Oldstead) and Roots (York) launched a UK wide delivery service of premium menu boxes back in April. There's the three courses for two people Made in Oldstead box (with three different menus to choose from) or a Classic Weekend Food Box, which includes two different three-course menus, each serving two people. Or, for extra-special occasions, the five course Signature Menu with a bottle of wine.

Customers can also purchase ‘add ons’ like a Courtyard Dairy cheese box or a ‘coffee and cookies’ box so you can round off your meal with a cup of The Black Swan's unique coffee and some delicious biscuits (both £15.)

Now the team is preparing a collection of festive boxes for December. Available to pre-order online now, the menus make use of the produce from the Banks’ farm and kitchen garden as well as championing Tommy's Yorkshire roots and British produce. Choose from Provisions Box (£195 - main image above) - delivery 23rd December, or the New Year’s Eve Celebration Box (£160) - delivery 30th December.

Customers can add pre-mixed 500ml restaurant cocktails to their order; Spiced Rum ‘Old Fashioned’, Bramble ‘Negroni’ and Blackcurrant Leaf Martin are available individually (from £39) or as a set (£124 for 3).

If someone has been VERY GOOD this year, treat them to an Oldstead Gift Box (£95) - delivery 8-12th December filled with exclusive preserves made from produce from the farm such as Fig, Date and Apple Chutney, Oldstead Garden Herb Oil and Smoked Crapaudine Beetroot Ketchup alongside the Roots cookbook, the Black Swan’s exclusively produced sparkling wine and coffee and a Made in Oldstead linen tea towel. 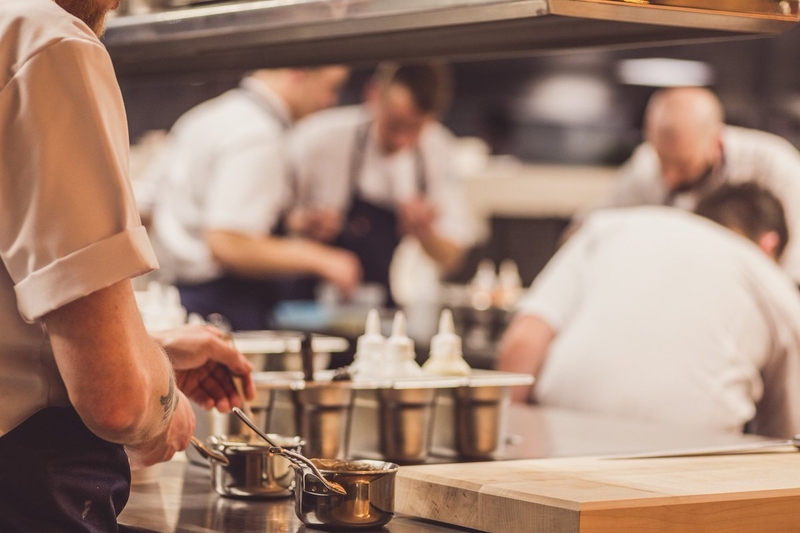 The two Michelin star restaurant in Aughton run by Chef Mark Birchall will be releasing a strictly limited number of luxury hampers for sale in the coming weeks. These will be packed full of superb Moor Hall produce and gifts such as their house-cured charcuterie; a selection of seasonal cheeses; branded Chef's apron and exquisite caviar. Hampers will also include a bottle of 'Chapter Five – Moor Hall', their exclusive collaborative gin produced with Goosnargh Gin, as well as some other signature tipples.  What’s more, one lucky recipient will find a Golden Ticket in their hamper for 2 people to dine at Moor Hall on Menu 8.

Hampers will be priced at £350 and will be available for collection only on Monday 21st December. £15 from every sale will be donated to Sandfield Park School, to help support families in need over the Christmas school holidays. Pre-register your interest here. 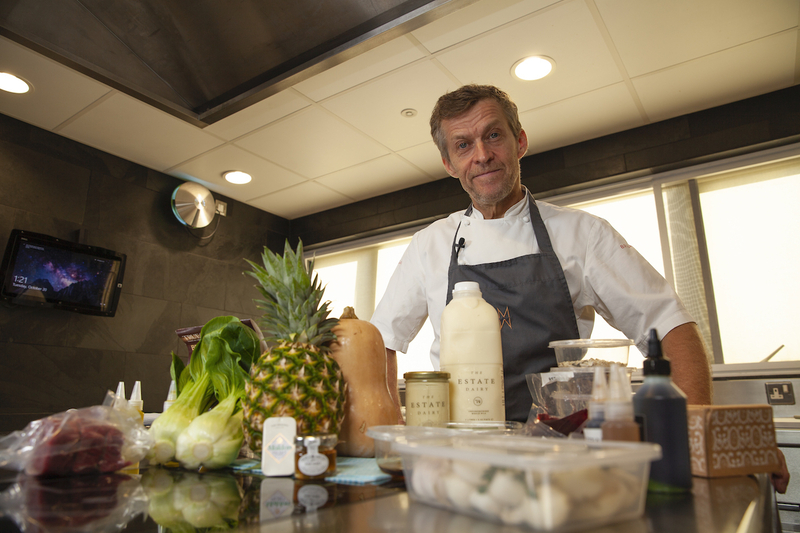 Dining out may be off the table for the time being, but you can still learn a few of the secrets behind Michelin-starred dining from the comfort of your own home, thanks to an exclusive virtual masterclass. Wellocks, suppliers of the finest ingredients to 45% of the UK's Michelin-starred restaurants, have transitioned into Wellocks at Home, with nationwide delivery - and now they've partnered up with Michael Wignall, Chef Patron of the Michelin-starred The Angel at Hetton.

Wellocks will provide all the premium ingredients you’ll need to cook an exquisite three-course menu for two on 27th November. Priced at £70, the experience includes a box of ingredients, a recipe booklet and access to an exclusive digital masterclass from Wignall. He’ll talk through techniques, tips and tricks behind some of his top dishes including roasted butternut squash, home-made ricotta, teriyaki hen-of-the-woods; followed by Yorkshire shin of beef, Alsace bacon and baby onions, and rounded off with brioche 'pain perdu' with caramelised pineapple.

£5 from every Virtual Masterclass is donated to charity partner, Springboard’s FutureChef, which aims to inspire young people to explore food and cooking as a life skill.

The resulting culinary creations will be judged by Michael himself - pictures can be shared on social media for the chance to win a gourmet tasting menu for two at The Angel. The virtual masterclass is available to purchase until 5pm on the 20th November, with ingredients being delivered on Wednesday 25th November ahead of the masterclass on Friday 27th November. Order yours here. 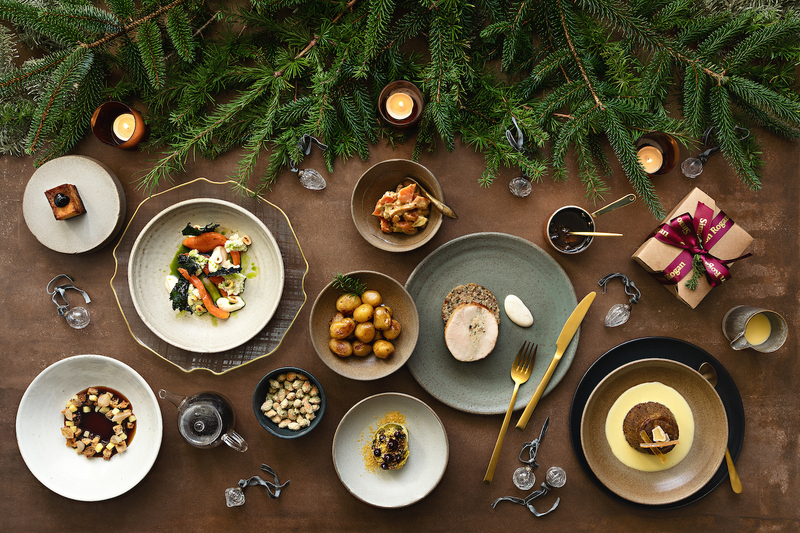 Following the success of the home delivery experience from the multi-Michelin star chef behind L’Enclume in Cartmel and Aulis in London, which launched during lockdown (but was only available to those living in the Lake District), Simon and team are now putting the final touches to a unique Christmas dinner which will be available nationwide (£85 per person + a single £10 delivery fee.)

Simon’s menu will showcase his signature style and dishes using produce harvested from his very own farm ‘Our Farm’ in the Cartmel Valley.

The experience begins with truffle pudding, followed by a roast onion broth with pickled onions and Westcombe cheddar. The choice of either Confit trout with cauliflower puree or Hen of Woods (v) precedes a show-stopping main course of Norfolk Black turkey with all the trimmings. A meat-free alternative of salt baked celeriac with glazed apple and wild garlic flowers is also available.

A classic Christmas pudding, created by Simon Rogan’s executive chef of the North-West Tom Barnes, rounds off the experience whilst homemade mulled wine, cider or an optional wine pairing is available to accompany.

Cheese & biscuits, mince pies as well as a ‘Christmas morning package’, including a bottle of Exton Park Sparkling wine, smoke mackerel and horseradish cream, can also be added to the order. The dishes come in vacuum sealed bags and have been designed for hassle-free preparation, with only heating and plating required.

A selection of Simon Rogan Christmas hampers are also available to order online.

The menu will be available for delivery between the 18th & 23rd December (excluding 20th).

Good news everyone! From Thursday 12th, we'll be accepting orders for Luxury and Prestige hampers, to be delivered nationally on Friday of the following week. These will all be products from our meticulously sourced suppliers, alongside our own unique preparations and gifts. pic.twitter.com/MGeh1SHE3a
— Mana (@Restaurant_Mana) November 5, 2020

Manchester’s first Michelin starred restaurant since 1977 is also coming up with the goods. They are not giving away many details yet, other than a teaser on Twitter which reveals that from Thursday 12th November, Mana be taking orders for luxury and prestige hampers, to be delivered nationally on Friday of the following week.

Mana’s chef patron Simon Martin followed this up by saying; ‘We've been quiet, because we've been working hard to safeguard our team. We have succeeded, (quietly), above all at every challenge this year. Our valued suppliers are our next priority. We've spent years looking for these guys, and we don't want to see them to disappear.’

The hampers will be filled with products from Mana’s meticulously sourced suppliers, along with a selection of ‘our own unique preparations and gifts.’

Also read - Hawksmoor has launched a range of Cocktails at Home