Back in the summer of 2020, Escape to Freight Island was just the tonic that Manchester needed. Born at the height of a pandemic, we were all adjusting to the new rules of socialising and the vast venue was designed to make communal gatherings possible at a time when going out-out and seeing live entertainment felt like a thing of the past.

We were impressed with exciting new food vendors from all corners of the UK. Voodoo Rays brought its first Northern venue to The Island, Belzan travelled from Liverpool, Baratxuri from Ramsbottom and, later, Chef Brad Carter would bring Michelin Starred kebabs to proceedings.

Now, the team that includes key players from Festival No.6, Albert Hall, and Refuge have announced a new food line line-up that sees Baratxuri, Patty Queen, Belzan, Choo Choo and Soft Boi heading out of the regenerated rail depot to make way for a brand new breed.

Earlier this month, Ramsbottom legend Baratxuri announced that it would be stepping out of its site at Escape to Freight Island. The Basque Asado-style restaurant brought the heat to the fire pit outdoors at the Depot Mayfield space before moving to an open-fire grill indoors. Whole fish and big cuts of meat are a speciality of the brand, whose final service at Freight Island will be Saturday 2 April.

Owner Joe said in a statement on Instagram, “After almost two years we have decided it is the time to move on to explore some new opportunities for our family run restaurant so watch this space.”

This follows news that award-winning Baratxuri Chef Rachel Stockley has put down the pans at the Ramsbottom restaurant. Big changes for the brand.

This isn’t the end for Baratxuri in Manchester City centre, though. Look out for traditional paellas, tapas and hand-carved Jamon Iberico de Bellota at KAMPUS this spring. Alongside sister restaurant Levanter, find it hosting a 10-week pop up in the KAMPUS bungalow and the terrace next to the canal. A space previously occupied by other local indies like Banh Vi, Tine and Breadflower

Stepping up to the grill will be Carnival. Another meaty marvel brought to Manchester by some of the heads behind Hawksmoor. The concept, which is a collaboration with award-winning chef, butcher, restaurateur and food writer Richard Turner will include more traditional steakhouse fare. Including premium rib, porterhouse and T-Bone steak and will be open for bookings by Wednesday 13 April.

Salford-based Burgerism whose burgers are currently only available for delivery and collection will take over from current burger vendor Patty Queen.

Its “lean, mean burger cuisine” peddles smash burgers that have gained an almost cult following online so should draw in some impressive crowds at its first dine-in gig. Get smashed from Wednesday 18 May.

Mystery supper clubs and exclusive events are also on the cards for this talented group of chefs, so keep your eyes peeled on Confidentials for more details.

As rumours are still flying around about Gooey Co’s takeover of the old Cat Cafe in the Northern Quarter, the super Instagrammable brand will be bringing its popular monster doughnuts, cookies and signature soft-serve ice cream to The Island.

Fans of having their pie and eating it will also be pleased to hear that Batard, which now lives at SeeSaw Space on Princess Street will also be joining the fold. Think sweet American-style pies like bourbon-laced pecan with dark chocolate and grapefruit meringue.

Both sweet-toothed shops will open in Escape to Freight Island on Wednesday 13 April.

And finally, if plans to get your skates on were scuppered when the venue’s seasonal ice rink closed its doors in January, you are going to be delighted with the news that a new roller skating rink will be opening in its place. Good Life Skates will offer tutored classes and workshops, as well as rollerskating classes and events up on the mezzanine level of the venue when it opens - also this spring.

We're looking forward to an exciting season for Escape to Freight Island, and can't wait to get down and sample all of the new offerings soon.

Read next: The Moorcock Inn announces it will close in January 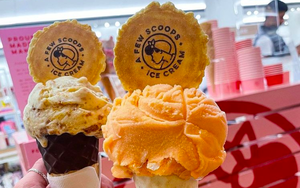 Everybody freeze: the best spots for ice-cream in Manchester

Everybody freeze: the best spots for ice-cream in Manchester
Web Design Manchester MadeByShape