ARCHITECTS 5plus have designs on the southern gateway to the city centre.

The new tower combined with Axis and Beetham Tower at the other end of Deansgate will create a whole new urban profile for the city centre. We're almost talking a 'cluster': one of architecture's favourite words.

In November 2014 planning permission was secured for a 27-storey residential tower, Axis, on the north side of Rochdale Canal at the junction of Trafford Street and Albion Street. If you know Deansgate Locks that's the empty plot of land on the eastern end of this railway arcade of drinking sheds.

Now, and with a much cleaner design, 5plus Architects have put together an excellent proposal thirty metres away across the canal, at 10-12 Whitworth Street West. This will be much taller and at 37 storeys the third highest tower in the city - just missing out by a single metre on second spot. It's height will be 117m (384ft).

The new tower combined with Axis at 93m (305ft) and Beetham Tower at the other end of Deansgate will create a whole new urban profile for the city centre. We're almost talking a 'cluster': one of architecture's favourite words. 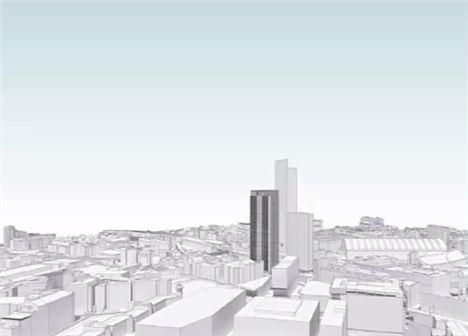 The beginnings of a cluster

The strikingly simple International Modern profile of 5plus Architects tower will enhance this part of the city centre and also give passengers on the mainline to Liverpool and Scotland an architectural thrill - if that's their thing.

The way the tower talks to the street seems satisfying with a generous raft of accessories incorporated down there including a bar, 'a party room', a library, a gym, a slide and a cracking staircase to take people around those lower and more public parts - there's a rooftop garden at the other end of the building as well.

These lower floors internally have a playfulness that belies the discipline of the external form. But as Jon Matthews, one of the architects involved says: "We want this to be an elegant and serious building but we want it to be more than that, we don't want to make it a one-liner, these spaces we hope will give the building extra soul." 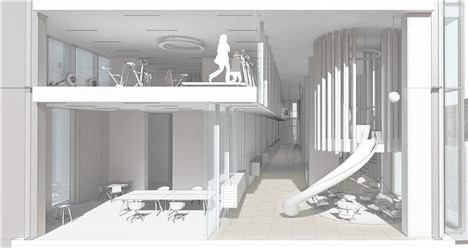 But it is with that sharp as a pin exterior that we get the magic.

Readers on Confidential have occasionally expressed a desire for Manchester to have skyscrapers such as The Gherkin or The Shard. To quote Mark Butterworth, who commented on this article about Highland House/North Tower, 'not the matchbox on end boring rectangle'.

He has a point. But then, think of the problems that can happen with such buildings, think of the dreadful Great Northern Tower in Manchester, a total mess of silly weak details in a silly weak shade of grey. The Gherkin is famous because it takes a very simple form and sticks to it - as for The Shard the jury's still out.

Scale and height usually demand simplicity and a sincere use of materials too. With its coherent texturing, this tower might appear a 'matchbox on end' at first glance, but look more closely and it is anything but. The articulation in the elevations will make this very much more than a simple glass box.

To this end 5plus Architects describe their building as 'Miesian' - after one of the fathers of the International Modern-style, Mies van der Rohe, a pioneer of skyscraper forms. They mention Chicago a lot too. This is hubristic but you can see what they mean.

Confidential would love to see this 37 storey tower built - it goes to planning on Wednesday 1 April. In terms of location it seems a winner already, certainly in terms of the strategic development of the city centre.

There are 330 apartments for rent in the building, fill them and you have a ready audience for the cinemas, galleries and theatres of HOME, soon to open round the corner. It will mean getting a pint is harder in the Briton's Protection but maybe the City Road Inn can up its game and spread the burden.

Meanwhile, the building scarcely impinges on exisiting residential developments. It lies to the north of aesthetically poor development Ropeworks but there's a railway line between the two. The Hacienda apartments are over the road, but a remove away, and that's about it. Aside from the yet to be built Axis tower.

Meanwhile the only demolition occurring is of a 100-year-old plus building, a former warehouse, the original architects of which would be surprised to find it still standing.

Of course, if permission is granted, there will be alterations to the design, but we hope not too many because this is a good one. At Confidential we like towers, especially residential ones. Beetham at night with its apartments lit up looks very fine. More of the same would be grand as long as they are located in suitable places unlike Highland House (click here).

Let's keeping raising the city up.

PS The developer of the scheme is called Brigantes. Historians amongst readers will recognise this as the Ancient British tribe that occupied much of the North of England. Good to see them making a come-back in property. 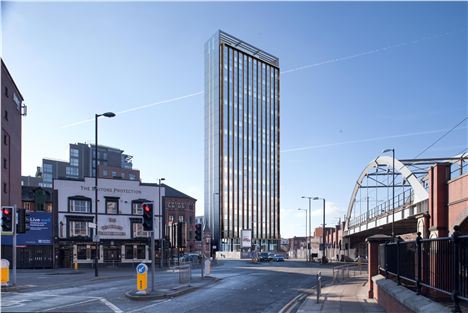 Sharp as a pin

Whitworth Street West, find a contained site, discipline it and then drop in a residential component