'No frills but plenty of soul' - Meu Portugal, Salford, reviewed

Chris Taylor is almost defeated by a Portuguese sandwich in Salford

It blew my mind when I found out that Nando’s wasn’t Portuguese. It’s from South Africa, apparently, and last time I went there, which I confess was a while ago, it was pretending to be from Mozambique, so at least it keeps its dishonesty fresh.

But there is authentic Portuguese food on our doorsteps. In Salford’s salubrious Langworthy is Meu Portugal, a small bar and restaurant serving the sort of food you actually do get in Portugal (and yes, chicken and chips, or "frango grelhado" as they call it in Salford, is on the menu).

Meu Portugal is in a modest, unassuming building in a parade of local shops. Outside a large, ferocious-looking dog jumped up at me. His owner apologised and said not to be worried, he was just saying hello. This is Salford; hard but friendly. No frills but plenty of soul.

The restaurant is not expensively rigged out or designed with Instagram in mind like so many of the bright pink, neon monstrosities we have to endure these days. It’s functional, clean and light. There were only a couple of tables occupied when we entered, both by what sounded like native Portuguese speakers.

The welcome was warm and genuine. The waitress seemed keen to make an impression but wasn’t cloying in her attentions. She answered questions where she could and sought answers from the chef where she couldn’t. She was also happy to offer suggestions for authentic Ibero-Salfordian cuisine.

Caldo Verde (£3.40), a potato soup made with spring greens and chorizo, was smoky, hearty and satisfying, the perfect antidote to the freezing fog hanging outside the restaurant.

Almondegas no Molho de Francesinha (£5.95), or beef meatballs, came in a sauce so ridiculously good I could have cried. A creamy, tomatoey, slightly spicy blanket that managed to excel without silencing the beefiness of the meat. Chourico (£5.40) was different to the sort you might get in a Spanish tapas bar. It was softer and cut more thinly before grilling. Different yet familiar, with the quality of the meat clear. Gambas a Guilho (£6.90) or prawns with garlic and chilli, were statuesque. Big, meaty boys, delicately spiced to give heat without overpowering their natural flavour.

My main course, Francesinha (£15.95) was a huge steak, ham, chorizo, sausage, egg and cheese sandwich, swimming in the meatball sauce from earlier. Kind of like the Transformers toy I had as a kid that was made up of seven smaller Transformers. Each Transformer was good on its own terms, but connect them all together and you had something so thrilling and ridiculous, you almost forgot about the constituent parts.

Finishing it was a challenge. It was less my Everest than Everest was Sir Edmund Hillary’s Francesinha. The more I ate the more there seemed to be. It was as if I was trying to bail out the River Irwell with a teaspoon in the rain. Seconds became minutes became hours. Sweat pouring down my face as I tackled the meaty Labour of Hercules. Was I having fun? Was the sandwich now part of me? Was I part of the sandwich? I was exhausted after I finished it. Both victorious and utterly defeated. I never wanted to see one of the damn things again but was already mentally planning when I next would. The paradox of Francesinha.

My partner, who spent much of the night frowning in disgust as I swam among the contents of a sandwich, ordered the Bacalhau Frito (£18.95), a fried codfish with green sauce and fried potatoes. Again, it was a biblically sized fish, the menu warned of bones but didn’t specify whether it was fish bones or the bones of a hapless diver swallowed by the great beast. It didn’t come with any visible green sauce. It was ok. Salty, with a much stronger flavour than cod I’ve previously eaten. It wasn’t at all dry, but without the sauce, it was just basically an £18.95 plate of fish and chips.

We finished off with two Pastel de Natas (£2.20), the traditional Portuguese egg custard tart. The pastry was flaky, and the custard was thick with only an undercurrent of egg. I was delighted they hadn’t over-egged this pudding because by now I just wanted to go and lie down in a dark room.

I keep coming back to the idea of no frills but plenty of soul. There was nothing clever or fancy about the food. It was honest and prepared with a great deal of love and care. The whole experience felt like you were in a family restaurant, from the waitress to the chef coming out to chat to us, to the Portuguese man sitting with his young daughter who spent their meal watching Portuguese cartoons on an iPad. The portions were ridiculously big, but this was reflected in the price.

Meu Portugal means My Portugal. It is unflinchingly and unequivocally theirs, and very obviously also belonging to their customers. I would go back if only for the iconic Portuguese beer Super Bock and for another dance with my nemesis the Francesinha. It’s a big ask for people to commute from the city centre out to Langworthy to go to a restaurant, but this feels very much like a restaurant bedded in the local community.

Ultimately, it comes down to where you want your hard-earned money to go and what Manchester (and Salford) you want to see. I would much rather it go to the likes of Meu than to a cynical high-street chain that sees customers as just another number in a spreadsheet column. You may be able to get more intricate, better-looking dishes for the same price, but what Meu sells is a huge love letter to a culinary culture, and that’s worth supporting. 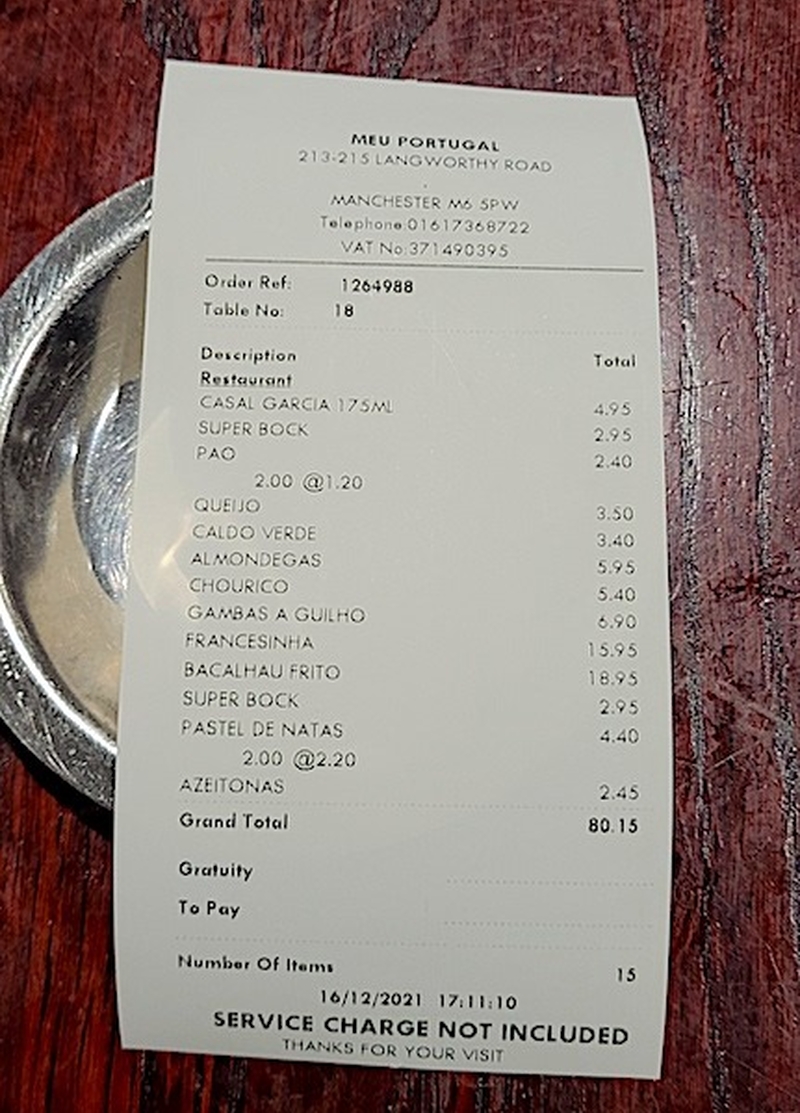