Week 47: in which the King of Gondor plans a new city centre tower

A man determined not to get to work on time and freeze his bollocks off has hailed Metrolink as the best thing that’s ever happened to him.

“I used to live in the city centre about ten minutes walk from work and found it very difficult to not get to work on time," he said. "Everyday I’d leave my house by 8.50am and always be at my desk by 9am all warm and toasty - it was a nightmare.”

But the man says a recent move to South Manchester had been a blessing. "It's great living in Chorlton," said the man, "not only has my girlfriend replaced bacon with tofu but it's now much easier not getting to work on time; it's too far to walk, the roads are impossible by car and too dangerous by bike, and this Metrolink system, well, this morning at Firswood there was no room for me to squeeze on for three trams in a row.

"And the best bit," he continued, "I had to wait eight minutes between each of them, in November, out on the platform, freezing my nads off, because this lot are too tight to put a couple of extra services on when somebody drops their packed lunch onto the line ten miles away at Oldham Mumps."

"I'm hoping to get fired and lose my house, family and dignity any week now."

Manchester City Council's planning department are set to approve plans by the King of Gondor for a new tower in the city centre. Aragorn II, son of Arathorn, has lodged plans to reconstruct the great White Tower of Ecthelion from Lord of The Rings next to Manchester Central after a fire-breathing Balrog obliterated Minas Tirith while searching for Councillor Pat Karney, who'd made off with a magic 9ct gold half sovereign ring from Argos.

A spokesperson for the council said: "I'm confident the city planning department will approve the plans by Aragorn II, son of Arathorn, they'll approve any old shit these days." Aragorn told Sleuth the scheme would be funded by a Far East consortium, sold to foreign investors as Buy-to-Rent apartments and fronted by Phil Neville. Neville said: "Anything Gary can do..."

(NB: this tower has actually been proposed - read the proper article here)

Sleuth and the alternative tour

Sleuth was talking to an Austrian visitor about guided tours and the visitor said he’d only ever been on one before, the ‘Ugly Tour of Vienna’, in which guests are taken to some of the ugliest places in the city centre. Sleuth had a think, and this is his route for an ugly tour of Manchester city centre:

Start early on a Sunday morning at Piccadilly Gardens Coach Station - cut through the non-gardens dodging bird shit and vomit - skip down Back Piccadilly for a coffee in Britannia hotel Sachas (Tripadvisor 2 stars and sinking) on Tib Street - then cut through Bridgewater Place behind Debenham's to view the façade of the Manchester Arndale on High Street - nip into St Ann’s Square to look at the bud fountain - take a spin past the concrete blob that hosts the Renaissance Hotel to look at the excrescence that is the Manchester Arena - finish with lunch in the Premier Inn tower opposite the Cathedral, maybe even book a room there.

Sleuth is drying out

Because of Sleuth’s hectic social life he’s decided to find ways to help him get through. These pills, advertised in The Wharf pub, look just the ticket.

You may remember the rumpus a few weeks back when new Manchester restaurant and bar, 1761, revealed plans to fill their huge basement marine tanks with live stingrays. Following sustained backlash on social media, bosses U-turned on the stingray plans, saying they'd use other smaller fish species instead. Though seems to Sleuth like they may have ditched plans altogether, opting instead for pictures of fish printed to sheets of paper and stuck to the walls. Sleuth thinks they may be onto something here, why not simply serve printed photos of food - diet-junkies would love it. 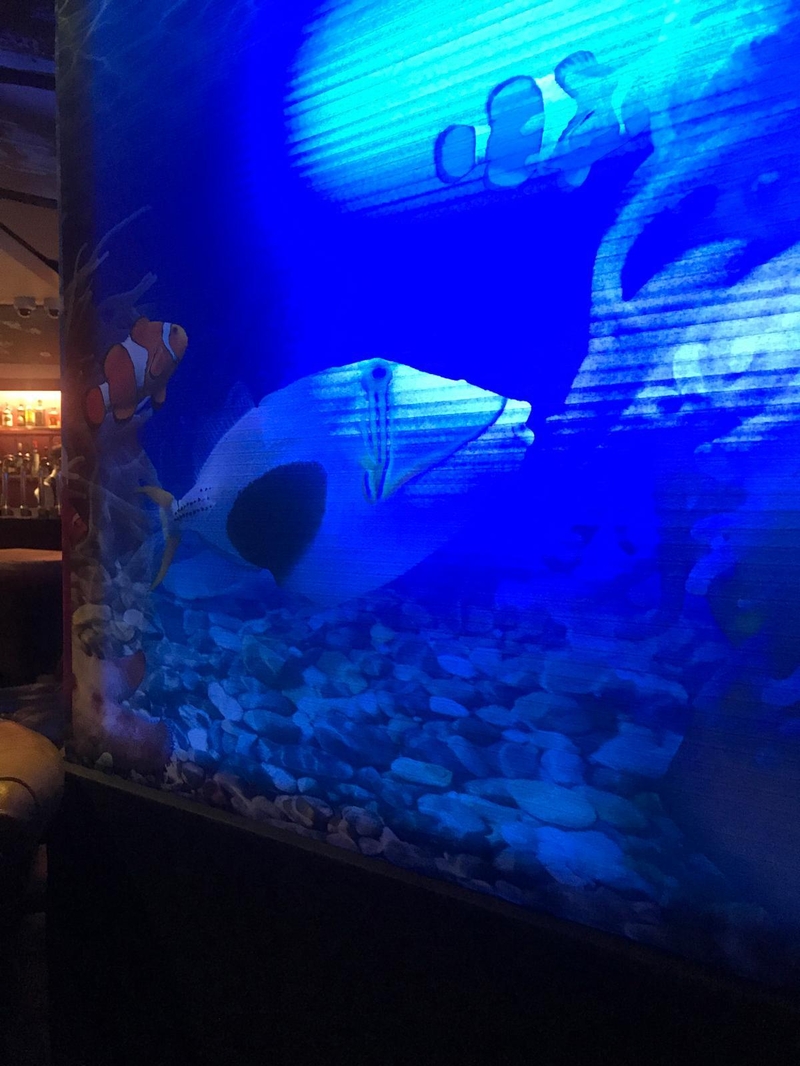 Sleuth was in The Wharf to host a quiz and meal for 90 tough Feyenoord footie fans. They were about to lose to Manchester City on Tuesday night. They had an extensive hot buffet prepared in The Wharf pub and being quite the tallest and biggest fellas Sleuth had ever encountered they gobbled it up within seconds. Aside from the fine Lancashire black pudding. “What’s wrong with this local delicacy?” Sleuth asked. “We don’t much like to eat blood,” said one fan. "Unless it’s that of our big rivals Ajax," said another. “Crikey,” said Sleuth.

Sleuth's dummy of the week…

Sleuth was coming down the steps from Castlefield/Deansgate to Whitworth Street West when heard laughter from the construction site of Axis tower. Then he spotted a builder dangling a blue dummy. Or was he attempting to free a colleague who'd got their head stuck in concrete...

Sleuth doesn’t like to stereotype, however, it’s safe to say that, as a collective, northerners tend to love pie, cups of tea, and gravy. Northerners even love these things together, but not TOGETHER together. Sleuth saw Holland’s Pies cause a furore on Twitter this week with a video of watery gravy being splashed over one of their meat pies. The video got over 700 replies along the lines of 'why are you pouring tea all over that pie?', 'I’ve seen thicker onion skins' and 'that gravy is so thin it could be a catwalk model'. Sleuth does love northern wit.

Sleuth's lost in translation of the week

While over on Facebook, Sleuth’s favourite rice and three place, This & That, were forced to issue an apology for a general comment lost in translation. Sleuth doesn’t know what the fuss is about, at least he didn’t call her a નીચ વ્યક્તિ.

Finally, Sleuth's thing to do of the week...

Sleuth recommends this. Manchester’s most enchanting building, Chetham's Library, dating from 1421, is opening this Saturday (25 Nov) between 11am and 3pm for families and kids to explore artworks hidden around the Library and medieval buildings as part of Brass Art’s installation ‘Gestured’. There’s a giant shadow puppet theatre, a treasure hunt, videos and installations, refreshments…and something else. If the kids are lucky they might see the ghost of the Grey Lady wafting through walls and be chased by the spectre of a giant devilish spider lifted from hell by the enchanter John Dee - who lived in the buildings 500 years ago. Well, adds to the fun.