In our third in an ongoing series, Neil Sowerby catches up with Isabelle Lynch, restaurant MCR’s Assistant Head Sommelier

BORN in Yorkshire, 24-year-old Isabelle Lynch has family roots in France’s north-eastern vine-growing region Alsace through her French mother. The importance of the food and wine culture was an integral part of growing up, and she remembers her grandfather pouring her first glass of Riesling at a family Sunday lunch. She was just eight ‘and definitely not enjoying it nearly as much as I would now’, she says.

The tasting menu is constantly changing with the season’s produce, so our wine flight also changes to reflect this. We tend to select wines which are suited to savoury food, not necessarily ones you would sit in the garden with.

In the vineyard, using fewer pesticides and fewer machines to cultivate grapes is less intrusive

In a changing wine world which are the up and coming regions? What is best value?

The South of England is exciting. It has the same chalky soils as Champagne and our cool climate is perfect for making crisp and elegant sparkling wine. A favourite is Nyetimber. Also look out for China – it’s the sixth largest wine producer in the world, but very little is sold outside. The trade is looking at China the way they looked at Chile and New Zealand 30 years ago, so maybe in the coming decade that will change.

In the vineyard, using fewer pesticides and fewer machines to cultivate grapes is less intrusive. It’s very important to farm sustainably and protect nature. My cousins make wine and without machines at harvest time they would need an army to pick all the grapes at the exact time they reach optimum ripeness before the next rain. There are so many risks involved with creating a fully natural wine, a small individual producer could lose a year’s worth of work all too easily. Every bottle you drink deserves great respect for how much effort has gone into making it.

A recent Yale University study on brains said that a larger percentage of women are classed as ‘supertasters’ compared with men. Apparently female brains have 50 per cent more cells in the olfactory centres dedicated to smelling. Still I think a large part of having a good palate is about spending time practising and training it.

Daciana Pinot Noir from Romania at £29. This wine is similar to Pinot Noirs from France, which is around the same latitude as Romania. However the cost of land and labour is far less there. This wine has juicy red fruit with white pepper and a lightness to it which allows it to sit well with a wide array of foods.

And at the high end?

Chevalier-Montrachet Grand Cru Domaine Leflaive 2007 (£450). This domaine dates back to 1717. Its complexity is rich with citrus, white peach, hazelnut and spice, and it is supremely ripe and elegant.

Name a less familiar wine you’d urge customers to try from your list. 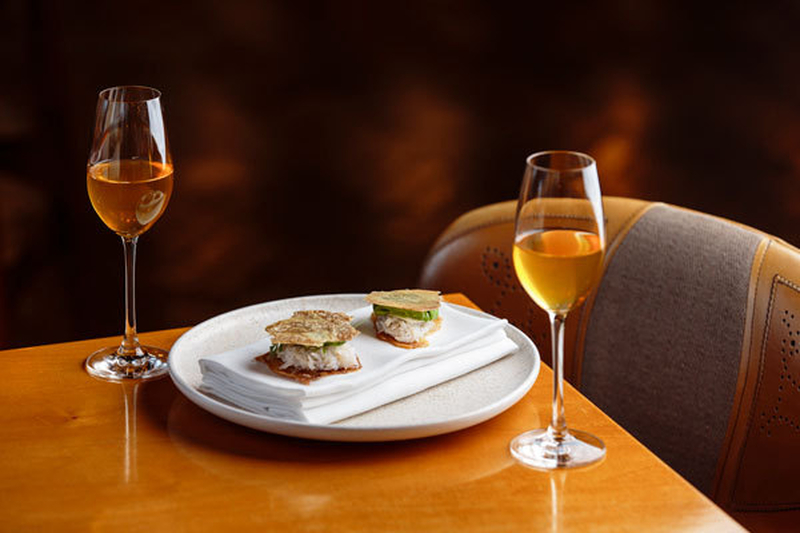 I’d rather pick a favourite style because you can take one grape and produce radically different wines. But if I had to pick one – Pinot Noir. Not only can you create a beautiful red wine that has the capacity to smell like pure farmyard (which does sound like an oxymoron), it can also create a sparkler of body and depth. My favourite Champagnes have the cream and toasted brioche of Chardonnay married with elegant structure from a large percentage of Pinot Noir.

Champagne goes with everything. However, my favourite pairing on our wine flight is a Hungarian Tokaji with a dish of Ribblesdale goat’s cheese, Jabugo ham, and different flavours and textures of onions. Very dry, its long minerality glides right through the acidity of the cheese and the onions’ salinity. And then it softens into a honey-like texture which indulges in the sweet caramelisation of the onions.

Our Head Chef and Director Aiden Byrne. He creates dishes that have so many different levels and layers. There’s such complexity that even in one mouthful the flavours evolve, change and merge as you’re eating.

Next time: Meet Caroline Dubois, Sommelier/General Manager, Where The Light Gets In, Stockport