Second week of January firmly done and dusted. Deep breath and exhale. How has everyone been getting on with those monster eating-out deals? As well as making the most of those we've also had our ears to the ground for the latest food and drink news and there's certainly a lot going on. New additions, big moves across the city and the return of one of the city's most sought-after tasting menus.

Italian chef Ornella Cancila wowed Denton throughout lockdown with her handmade pasta creations. Traditional, carefully crafted favourites such as arancini, lasagne, cannoli and tiramisu flew out of her door and proved a hit when she took over the kitchen at Howard's Neighbourhood Bar. Now she will be opening her own deli, pasta and takeaway shop on Denton's Manchester Road. The rumour is that Liam from Lazerian Studio is helping with the look of the place - the art cafe on King Street was quite the concept - so watch out for that. Art aside, we are looking forward to getting our mitts on the four cheese gnocchi and lobster ravioli.

What we eat in the shadows

It could be recipe for disaster – at least for those of us who are messy eaters. But apparently dimming the lights turns up all your other senses, so dining in the dark actually makes some sense. At least that’s what 20 Stories tells us as it hosts its annual Blackout Dinner - where the only lights are candles and the glow of the city - in collaboration with Monkey 47 Gin at the end of the month.

An exclusive menu has been created by 20 Stories kitchen team, with a selection of wines to match chosen by Head Sommelier Ivan Milchev. Among the highlights (or maybe we should say lowlights) of the Blackout Dinner menu are goats cheese mousse with poached pear, kohlrabi, chicory and walnut; pan-fried sea bream, Jerusalem artichoke and truffle orzo, wild mushroom, chicken, and chive butter. The main course will be duck breast, beetroot, kale, spiced butter and miso sauce, while dessert will be a chocolate dome served with honeycomb and warm caramel sauce.

Tickets are priced at £55 per person with arrival at 7:30pm and dinner served at 8pm on Sunday 30 January. For further information or to purchase your ticket, contact the team on 0161 204 3343 or email Breeze on BreezeW@danddlondon.com. 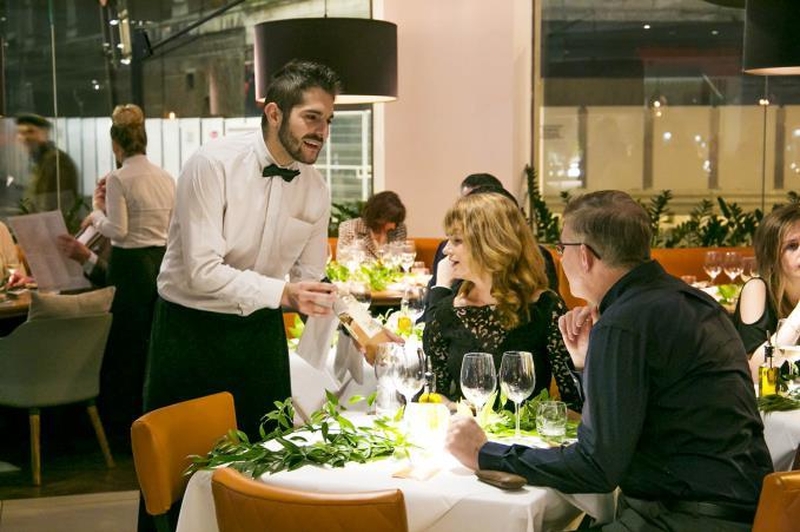 Responding to pleas from operators to help with the pre-Christmas meltdown caused by omicron, Rishi Sunak finally got around to announcing a new grant funding scheme to support businesses that was, let's say, a tad underwhelming. Nevertheless, the Omicron Hospitality and Leisure Grant payment of up to £6,000 to help businesses in the hospitality, leisure and accommodation sectors is now available. Manchester City Council are encouraging businesses to apply as soon as possible and to call Manchester's Business Growth Hub on 0161 359 3050 or visit www.businessgrowthhub.com to see what help you can get if your business is struggling.

Oxford Road hotspot Hatch is having a trader reshuffle this month with a couple of new names moving in to the colourful shipping container village. This comes after tiny tapas bar Abeja announced that it was moving out of its home under the Mancunian Way flyover last week.

Look out for Stockport’s I Knead Pizza at its first city centre outpost serving up 8-inch piccolo pizzas, small plates, bites and panuozzo sandwiches made from pizza dough and filled with all manner of Italian meats and cheeses.

Hatch also welcomes the extremely cocksure Wingdash - from the folk at Salford’s Burgerism - with apparently the “best chicken wings in the city”. Made using as local ingredients as possible, a box’o’chicken will set you back around £9 but we’re guaranteed zingy flavours like lemon pepper and classic hot buffalo.

The next chapter of the Kong’s Chicken Shop story is shaping up on Whitworth Street as the fried chicken pop-up shop has announced an American diner-themed, long-term kitchen takeover at Dogbowl starting 19 January. Expect signature sandwiches, fried chicken (obviously) and even a Kong’s take on fish and chips. 25% off in the first week when you book a table or bowling lane.

Good news for Didsbury’s urban ramblers, there’s a new café to stop off at on weekends. Fog Lane Park Café will be open on Saturdays and Sundays between 9.30am and 4pm and serve a menu of home-made soups, salads, toasties, cakes and hot and cold drinks. The venue, which is ran by the same social enterprise as Withington Public Hall will also make use of the space as a community hub. Early shots of an orange and almond cake (gluten, wheat and dairy free) look very promising.

A tasting menu with a difference

Touted as “the event you didn’t know you wanted but glad is happening”, Stalybridge Buffet Bar is bringing back its mythical crisp butty tasting menu for two days only this month. Available on the 27 and 28 January, five crisp butties (previous crisps have included Monster Munch and Scampi Fries, all on Warburton’s white thick sliced with lots of Lurpak) will be expertly paired with five Thornbridge Brewery beers. Booking is strongly encouraged for this landmark event.

Although Prestwich and Palermo may seem worlds apart, Sicilian chef and side-street hustler Antonio Giannone is bridging the gap with his little van of fresh pasta and parmesan fries. Situated on Bury New Road next to the Shell garage, this white van of carbs offers up a menu full of freshly prepared pasta with various fillings and toppings including meatballs, spicy sausage, cauliflower, and chicken.

Open from 9 til 3 on Tuesdays, Wednesdays and Thursdays, Antonio spends his weeks making pasta for the people of Prestwich and his weekends at the various Makers Markets around Manchester and its suburbs. If a trip to Sicily on your lunch break sounds tempting, then treat yourself to some fresh chicken penne from Sicilian Bites whilst you stroll through the streets of P-wich.

Ate Days a Week are on the move

Saying “see ya” to its iconic Stockport spot, Ate Days a Week is transporting its award-winning pies and super-filled sarnies all the way to Albert Square. Opting for a more central location, this fish and chips favethanked all of its loyal customers on social media before confirming that its original Vernon Street venue will now play host to all things rum, whisky, and bourbon as Stockport’s hottest dive bar Notion takes over full-time.

Although this wholesome haunt’s exact new location is yet to be announced, the team assure us that this move is simply triggered by an urge to “get bigger and better and fully flourish as a seriously good restaurant” – sounds like a plan.

Super Bowls-full of jackfruit wings and nachos at Grub

If you wanna touchdown in town for this year’s Super Bowl, Grub is showing the big game on its biggest screen at 11:30pm on Sunday 13 February. Tickets for the whole event are 15 quid, which includes some in-house drink specials and a menu packed with nachos, wings, and fries courtesy of San San, who are also set to occupy a new spot in Prestwich village very soon too. Food is served between 9:30pm – 11:30pm and table reservations will be allocated depending on the size of your group, so gather your squad and get ready to huddle for some serious team talk and tactics.

Also in the news this week

All finished with this week’s A-news bouche? Feel free to have a look through our news mains, with this week’s specials including an interview with Brazilian chef and new Blossom Street Social pop-up resident Caroline Martins, Ramona and Sexy Fish goss, and a veg and vegan restaurant round-up that’ll have you preaching the wonders of tenderstem in no time.