'Grandmas would be proud' - The Fountain House, Albert Square, reviewed

The menu at The Fountain House, formerly Albert’s Chop House, is so large you to have to climb a hill to get a view of it all. What’s interesting is the theme here is British food, probably the most labour-intensive European tradition of grub outside the upper reaches of French cuisine. This means the chefs here have to work very hard. They do good work.

The building is one of my favourites in the city. It opened in 1866 as the Memorial Hall for the city’s Unitarians (a Christian sect that doesn’t believe in the Holy Trinity, just one God). The building was designed by Thomas Worthington and the style is Venetian Gothic using different tones in stone and brick with splashes of lovely carved typeface. It turns the corner from Albert Square into Southmill Street beautifully and is a lesson to all architects, being a good neighbour to the other buildings, showing off a little, but not dominating them.

The fact Thomas Worthington was a Unitarian himself probably in no way influenced him in gaining the commission. Probably the same with all the other Unitarian structures he designed across the country. Still, with this clear example of jobbery, posterity was lucky he was such a good architect. Worthington also designed the Albert Memorial in Albert Square, and the Jubilee Fountain in the square which may explain the unusual name of the restaurant and pub under review.

To get these musings back on track I’m going to make a grotesquely strained analogy: chefs are similar to architects. They have to attempt to construct something which is appealing and if we appreciate their work we can stuff our faces with their designs - or if we don’t, we can leave them in ruins on the plate. The good news is, if chefs fail we don’t have to live with the consequences for decades

The Fountain House team are doing well in making their work appealing. Striking. This is big food in every way, in presentation and scale. You won’t go hungry. Starters of lamb belly fritter (£10.50) and devilled whitebait (£9) proved this.

The whitebait was the best I’ve had in Manchester for ages, lightly treated, not over-cooked and crunchy. Often whitebait emerge from kitchens as fishy french fries, so sharp you can spear olives with them, or an unpleasant dining companion; not these. As a bonus, there were some fine baby squid keeping the fish company plus a very good tartare sauce.

The lamb fritter, with an anchovy and caper ketchup and perfectly crispy mint, is all you need for a full lunch never mind a starter. It was a real winner this, friable meat, full of flavour, comforting, bringing a smile to the face. Get this one.

Mains were equally generous and handsome, a Charter pie (£17.50) for my dining companion and a beef hashbrown (£18) for me.

The Charter pie was filled with chicken and ham, suffused with tarragon under an exemplary pastry with a big friend of hispi cabbage and a fine rich gravy that you could drink as a winter warmer better than any mulled wine. The mash was a disappointment, bland when it should taste like it had been mated with butter to make it light yet lush. Perhaps the potatoes had been boiled too long as well.

The beef hashbrown came with a crispy egg which broke like dawn, smoked pancetta, mushrooms and another very good gravy. This was a really excellent, ambitious dish with the only drawback the pointless clump of rocket to add green to the dish. Shovel that to one side quickly and enjoy the rest, it’s a winner. The side of broccoli, chilli and lemon (£5) was lovely to look at and delivered a nice kick.

Pudds were proper pudds, not desserts. The cherry tart (£5.50) and the apple crumble (£6.50) resembled really good home cooking and I mean this as a compliment. Grandmas would be proud of them.

That’s the thing with good British cooking. Often our best experience of it was or is, home-cooking. It's much easier to get right, say, a Sunday roast and get it right for five people than it is to time it for a restaurant sitting of 60.

As a representative of the best of British, pub grub can be such a disappointment, too heavily dependent on the deep-fryer and low-end ingredients. Ninety per cent of pub food bears only a twenty-five per cent resemblance to good British cooking. Pub economies of scale find it so scarily labour-intensive. To do it properly just about every utensil and utility in the kitchen is in operation simultaneously.

Gordo had several folk round for a Christmas meal and he did a British three-courser. At the end, his kitchen was an Armageddon of washing-up. As good guests, we left him to it.

The Fountain House is doing well delivering this bold British cooking and delivering it to this quality. The fact it’s now part of the Greene King chain is more impressive, chains don't usually try so hard. (By the way we should thank Roger Ward and the Victorian Chop House people for initially saving this building as The Fountain House.)

The main dining room, in the basement, is a handsome space; it feels right for the style of food. It deserves to fill up with appreciative customers when things return to a semblance of normality. The only concern is that such labour-intensive quality is a little out of fashion in a market dominated by lighter, quicker Mediterranean or East Asian styles. Yet, give Fountain House a go whatever your present tastes, there's plenty of choice. 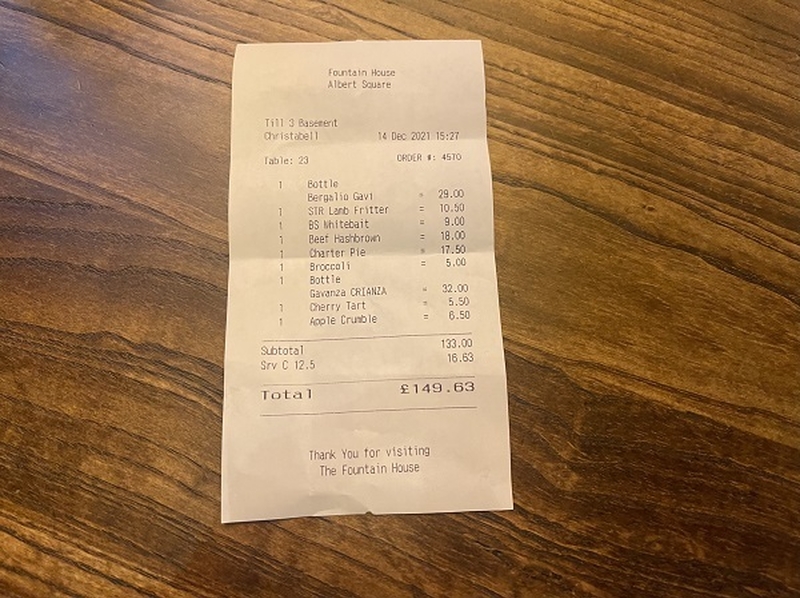