Ah, Maray. The jewel-like pomegranate seed on Liverpool’s falafel crown. How fortunate that we Mancs have now been anointed by its hummus. I make no secret about my scepticism of “Middle Eastern” restaurants. I thought I was done with mezze boards and tiny bowls of spiced olives, but truth be told, I’m excited about Maray.

The walls aren’t crumbling down to imitate the feeling of dining in a desert cave, nor are there shelves filled with bottles of potions, skulls and drapery

Despite visiting Liverpool often, I’ve never wandered into any of the brand’s three Scouse venues. But I have heard many short stories and fables about its disco cauliflower.

I’m meeting a friend in just over an hour, but instead of sticking around at work (Maray is a stone's throw from our front door), I decide to sit and have a cocktail on my ones. A beetroot gin and tonic goes down easily - the sweet earthy beetroot floats above the G and the T in my glass.

By the time she arrives, I’ve been reading the menu for what feels like days. Keen to eat, I take over the situation and get down to business. Falafel and cauliflower are first on my list.

A falafel sharer (£14.50) to start is more than enough to share. Christ, ten pieces of crispy on the outside, soft and herby in the middle falafel is enough to feed the Persian Empire. The deep-fried balls are almost unnaturally green and velvety inside. Flatbread, tabbouleh and hummus share the plate that is doused in tahini and harissa. If you like sauce, you’re gonna like it here.

Disco Cauliflower (£7.75) looks like an overdressed Christmas tree with generous squirts of every sauce that Maray makes. This isn’t the first time Maray has been reviewed by Confidentials, and I don’t think there’s much more I can say about the famous brassica without repeating the sentiment of others.

Kel thought it “looked like a swamp thing but tasted like a souk on a plate” after she visited the Albert Docks restaurant and I tend to agree. It’s special alright, but it means that nothing else on the menu has a chance.

Pork collar (£12) with tahini, amba sauce (like a savoury pickle-y, mango chutney), date syrup and confit garlic, has everything on my bucket list. But it just doesn’t have the dance moves of the cauli.

I’ve tried this dish twice now, and both times the meat has been dry and tough. A shame because the sweet drizzles are incredible. And that confit garlic - perfect for squishing.

Of course, this party of two has been seated at a table the size of a postage stamp. And as the small plates keep arriving, our gluttony is on display for all to see. There is no room to enjoy the suggested two to three plates per person. This quick weeknight dinner feels more like a banquet when lamb kofta (£8.50) appears, followed by halloumi (£8.25) with a crown of crispy kale.

Luckily, we are swathed in foliage. Large palms nestle in every corner and absorb some of the conversations happening around them. It’s actually an oasis of calm.

Maray is Middle Eastern-inspired, sure, but it doesn’t feel like I’m waiting in line at Universal Studios. The walls aren’t crumbling down to imitate the feeling of dining in a desert cave, nor are there shelves filled with bottles of potions, skulls and drapery. The dishes aren’t terrible copies of traditional cuisine either.

Maray is in fact inspired by Le Marais neighbourhood in Paris, known for its multiculturalism and, in Maray’s founder's own words “some of the best falafel in the world”. This fresh take has given Maray the opportunity to experiment with dishes - notably its sauce.

Our kofta comes with saffron tzatziki and mint caramel. Sign me up for saffron tzatziki, please. In whatever way possible. It is divine, clinging to slices of pickled cucumber, stained sunshine yellow by threads of saffron.

In contrast, halloumi with its headdress of crispy kale is just there. Yes, halloumi is universal in its popularity. It’s salty and squeaky as expected, and its bed of buttered leeks are fine too, but this plate is unusually dry.

Maray has played a classic salesman technique - it has practically gunged me in saucy flavour, got me hooked, and then taken it away. Honey dressing is, of course, perfect with halloumi, but it’s barely a whisper.

As dessert rolls around, we have two to choose from. Chocolate tart (£7.75) is a slither of powerful bitter ganache. I choose it for the presence of sour cherry jam. I usually have to drive to Venus Supermarket in Longsight to get my hands on this. It does its job and helps me slice through the ferocious chocolate.

Medjool bread and butter pudding (£7.25) with caramel sauce sounds like heaven but is a cold, wobbly cube of bread. Why then am I still eating it? Well, because yet again, the flavours are intoxicating. Medjool dates are like nature's toffee and I'm reminded of my childhood when I would shut myself in my bedroom with a box, refusing to share.

I don’t know how or why Maray makes such saucy sauces but all I can think of are tired cliches about bathing in them, inserting them intravenously or bottling them up.

There are some misses on this new Manchester menu, but don't let that stop you from getting your mitts on the hits. 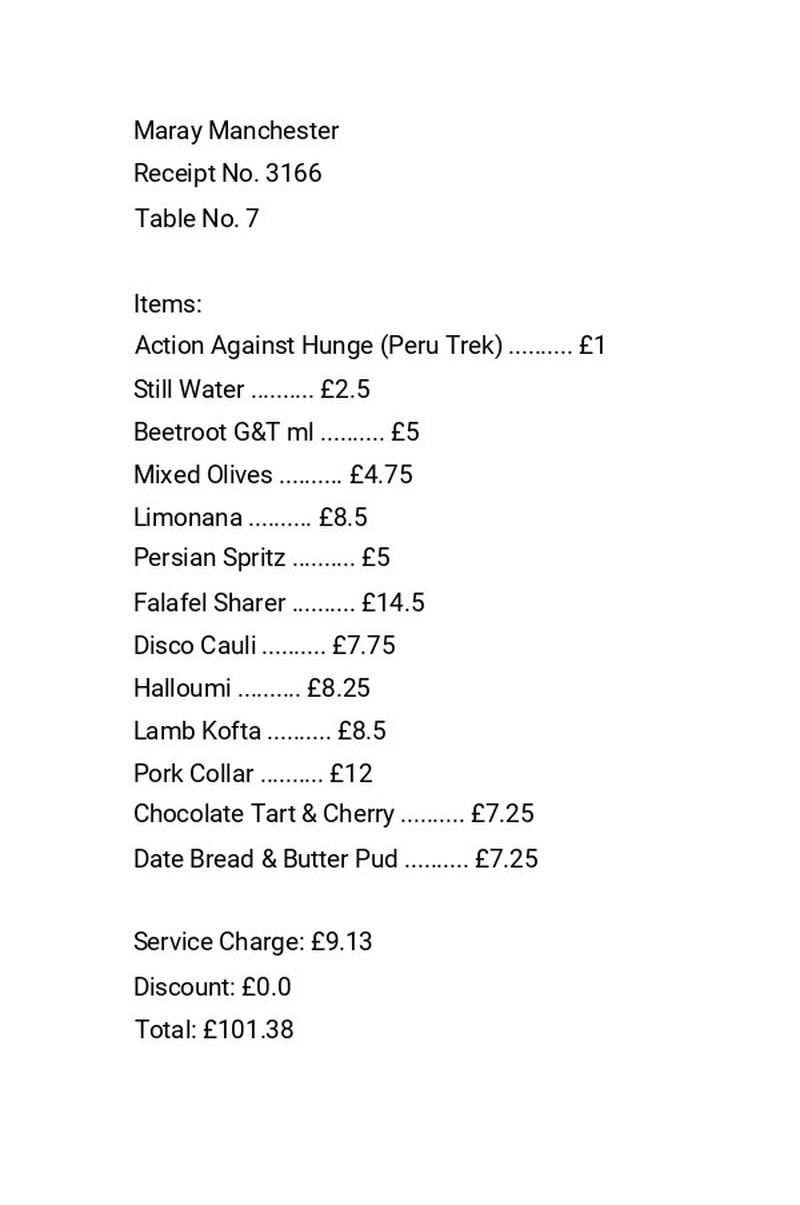