On Tuesday 11th August, venues across Manchester turned ‘emergency red’ to highlight the plight of the live events and entertainment sector, which is on the verge of collapsing without financial support from the government. The same day also saw 2000 industry workers from the music and event sectors unite for a socially distanced silent march through Manchester.

Both events were part of #WeMakeEvents, a campaign set up by The Professional Lighting and Sound Association (PLASA) to address the imminent danger the industry is in.

Events, festivals and performance venues have been unable to safely reopen due to social distancing guidance. They may not reopen until early 2021 - and opening times keep being pushed back. While the government’s £1.57 billion rescue fund will provide a lifetime to some, it does not currently acknowledge the wider events supply chain; around 70% of which is freelance. With the self-employed income support scheme set to end this month, over a million professionals are at risk of losing their jobs and redundancies have already begun: research indicates that 25% of companies will have served notices by the end of August, rising to 70% cent by the end of December.

Despite some recent positive milestones for live music and nightlife, including £2.25m emergency funding for music venues and parity for the clubbing sector in accessing the government's £1.57 billion performing arts recovery fund, it remains a tenuous time for all the live entertainment industry - from music to comedy and theatre, festivals and other events. The WeMakeEvents campaign is asking for continued support across the sector; for both self-employed/freelance and employed members of staff - many of which are currently only protected by government finance schemes set to end to soon (including self-employed in August, furloughed staff in October) and some of which don’t even qualify.

To that effect, Tuesday 11th August saw a day of peaceful protests and creative action designed to shine a light on the collaborative nature of the industry. Manchester was the only city to host a march, which saw 2000 industry workers from the music and event sectors unite for a (COVID-compliant) silent protest from Manchester Academy to St Peter's Square. Many participants - which spun sound engineers to security, truck drivers to tour managers, cleaners to crew, box office to finance staff and many more - pushed flight cases past iconic venues that are currently shuttered. 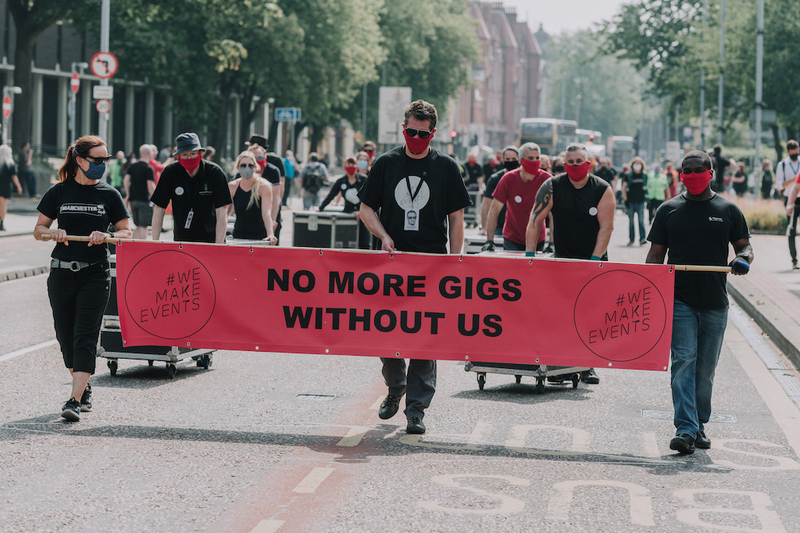 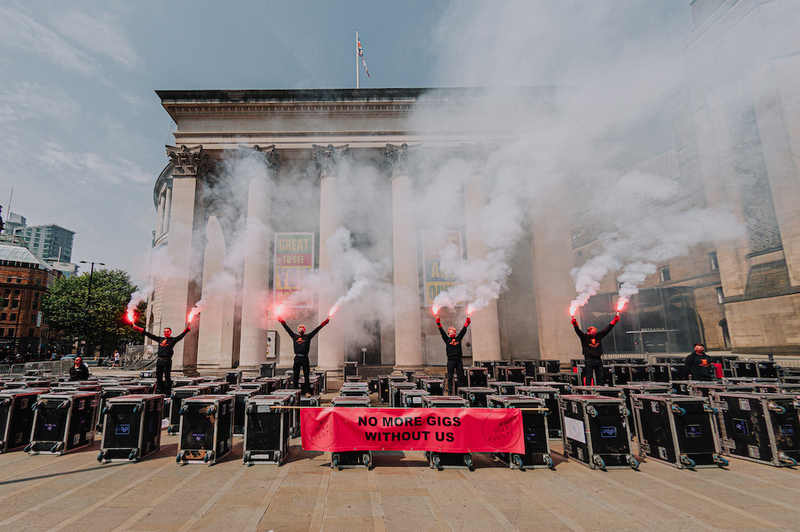 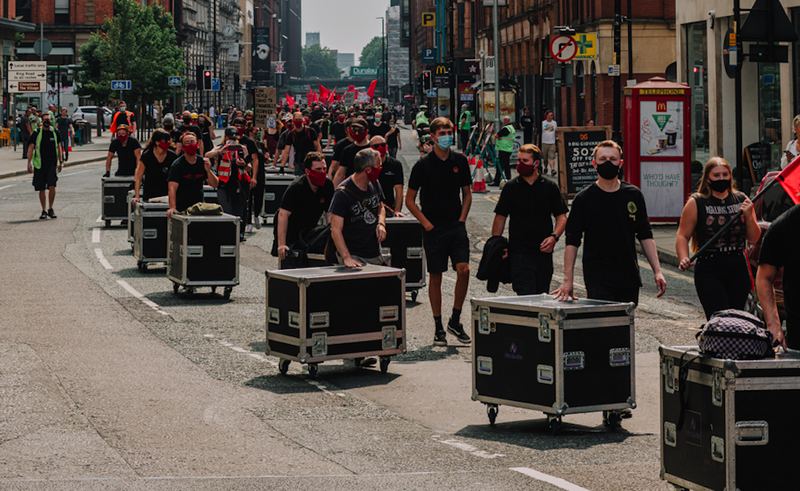 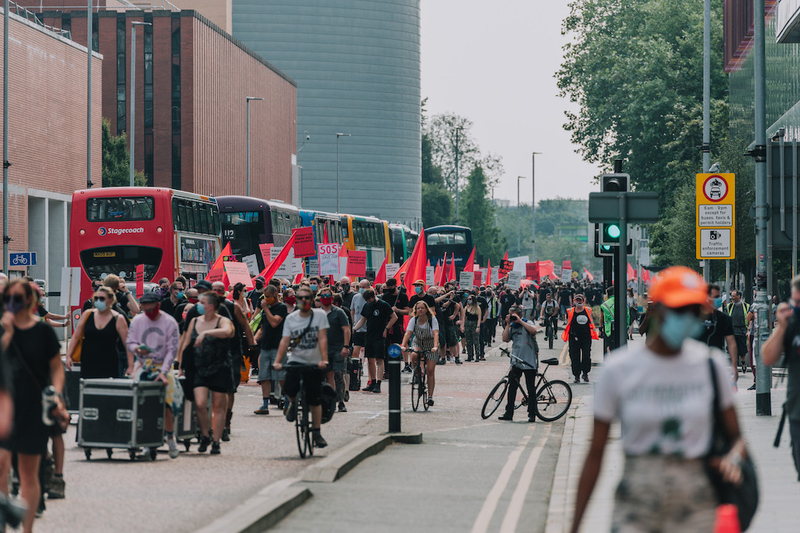 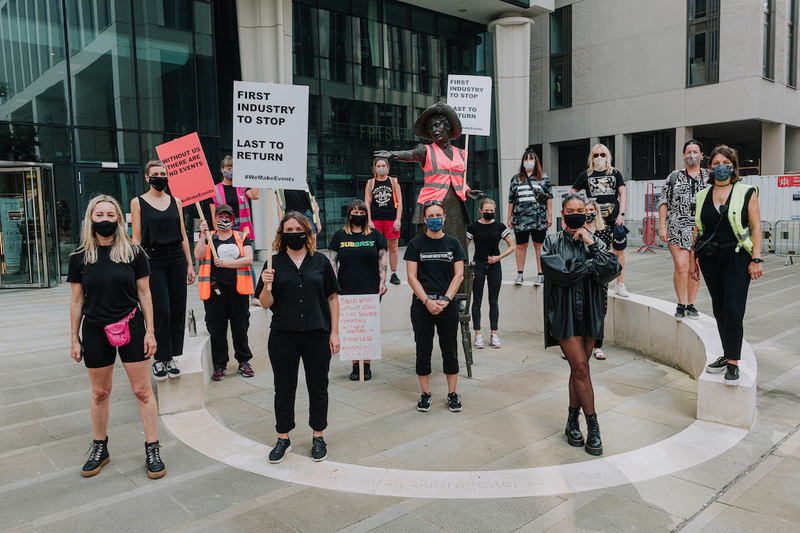 Then followed ‘Light it in Red,’ which saw over 715 venues across the UK go into ‘red alert’ via the use of striking light effects. While this happened on a smaller scale last month, August’s event saw even more buildings take part: theatres such as the Lowry, Z Arts and Contact plus music venues like Night & Day Café and O2 Ritz were but a few of those in Manchester.

Andy Burnham, Mayor of Greater Manchester, said: “As a city, Greater Manchester prides itself on the calibre of the events held here. The events industry is such a huge part of what makes this city great. Getting the events industry back up and running is crucial to the city-region’s economy, as well as essential for getting people back into the city and our towns. But those who are unseen, such as promotors, managers and box office staff need continued support from government. That is why I support those taking part in the protest and urge the government to offer continued support in order for the events industry to survive.”

Speaking on the plight of the industry’s freelancers and self-employed, Sacha Lord - night time economy adviser for Greater Manchester - said: "(They) are the forgotten workforce during COVID. Where other businesses have had access to government support, those who work for themselves have been left behind. I personally know of many DJs, photographers, sound engineers and artists who were at the top of their industries pre-COVID and who have now been forced to give up their passions and who are now working in retail or construction just to make ends meet.

“I have been particularly concerned not only about the financial strain these individuals have been under, but also the mental health toll the pandemic has taken. Mental health is something all of us should be aware of more than ever right now and I urge everyone to check in on each other more. If you are struggling, please reach out for help.”

Labour’s shadow minister for business and consumers Lucy Powell MP said: “For many weeks, I have been calling on the government to provide targeted support to the hospitality sector to save jobs and livelihoods. Sadly, there is a whole industry that they have simply ignored the calls of help from.

“In Manchester we have one of the largest, flourishing events and festivals scenes in the UK. We have one of the largest event spaces, one of the most used in door arenas in Europe and one of the largest municipal parks in the UK. Presently, they lay dormant, with the consequence being many freelancers and event staff left penniless since March, with no hope or guidance. (I supported) this Tuesday’s march to highlight the plight of the events industry and supply chain, to not only raise awareness of this lost industry but again to call on the government to recognise this sector.”

Also: Elbow and Everything Everything announced for special fundraising gig series