Manchester is not not London + Manchester's biggest lunch + tooth or todger?

Week 25: in which Sleuth meets England supporters on Gnome Island

Manchester is not not London... so is

Is Manchester in the north? Well, yes clearly, everybody knows it is. Except it isn't, it's in London, well it's not not London, according to Newcastle University professor Mark Tewdwr Jones.

BBC Radio 4 wants to know exactly where the north begins (presumably so they know on the train up when to pinch their noses) so asked the professor to draw this line on a map (see below). He said: "Perhaps the most pertinent question is where does London end?," says Tewdwr. "My map is a Northern area defined as being 'not London'."

Thus, London (or not not London) encapsulates everything from Cardiff up to Manchester, over through Leeds to York, down past Sheffield to King's Lynn. Not London includes everything north of that line, so Liverpool, Hull, Grimsby and pretty much the whole of Wales. Funny that the prof should think Manchester, Leeds and Sheffield within London's sphere of influence, but not Liverpool. No not Liverpool. God forbid.

Sleuth is very confused by the whole thing, but is pleased that now we're considered part of London we might finally get some of that juicy HS2/Crossrail money and be able to catch a train which isn't just a repurposed old bus from Manchester to Bolton in less than seventeen hours.

Where does the north start? Tune in to #r4today tomorrow for a full discussion from @getnorth2018 where @MishalHusainBBC will be presenting from. Here's what @profmarktj thinks... "My map is a northern area defined as being ‘not London’, outside London’s sphere of influence" pic.twitter.com/cMQovStN7Q
— BBC Radio 4 Today (@BBCr4today) June 22, 2018

Leying it on the bottom line

Sleuth was out and about on Thursday and speaking to a chap called Greg in HOME, who was looking for a good Indian meal. Sleuth asked where the man was from. “Glastonbury,” Greg replied. “Nice place, full of people who believe in mystical stuff such as ley lines,” observed Sleuth. “My house is on a ley line,” said the man. “Do you believe in ley lines?” asked Sleuth about the lines of invisible energy said to criss-cross the country and that prehistoric man and aliens followed or follow. Apparently most of us are too out-of-touch with our souls to see them. Sleuth thinks they are hocu-pocus. “No, I don’t really believe in them,” said Greg, “but my house is on a ley line apparently and in Glastonbury that’s really increased the value.” “I bet," said Sleuth.

When Greg had gone Sleuth said to his friends. “That’s made me wonder whether my house might have additional value through association.” “What do you mean?” they asked. “Well, my house in Old Trafford is on the same street as the first house Mick Hucknall bought way back in the eighties when Simply Red’s first album became massive. Maybe that adds to the value.” “Oh dear,” said one. “You need to keep quiet about that,” said another. “Tell no-one, put it on the market, and move quickly,” said a passing estate agent.

Harry Kane and team mates will no doubt be encouraged to greatness by the huge England fan base in Manchester. Especially rewarding is the knowledge that so many of them are ceramic with cute beards and the odd plant pot and trowel. Yes, on Gnome Island in the Ship Canal at Old Trafford these England supporters represent not only the country’s racial and sexual diversity but its love of gardening. Let’s hope the boys bring the World Cup home for these plucky little folk doing their best to keep the country smiling. 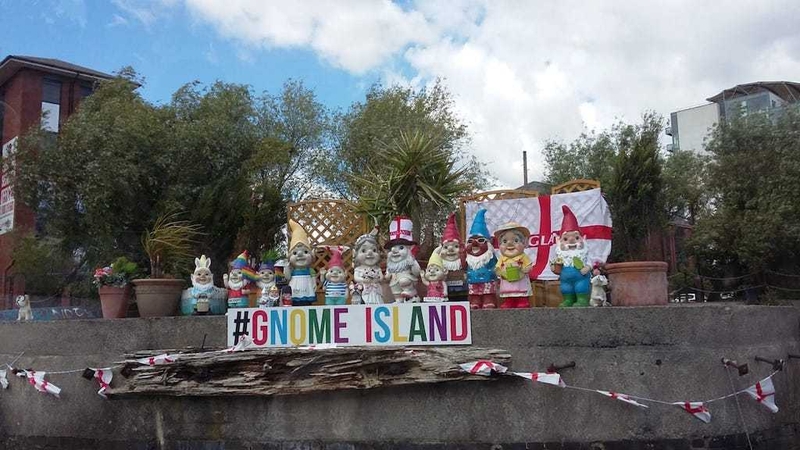 Sleuth's unfortunate tattoo of the week

Sleuth was watching England beat Tunisia in the World Cup on Monday, but was momentarily distracted from the action when he caught sight of a new tattoo on the forearm of his pal.

"What's that supposed to be?" asked Sleuth, "because it kinda..."

"I had a tooth pulled," said Sleuth's friend, "so got this to remember the moment."

"Ah yes now I see," said Sleuth, "but has anyone mentioned that from one angle it looks like, er, well, a..."

"Yeah yeah I know what you're thinking, but it doesn't that much," said Sleuth's friend.

"It really does," said Sleuth, struggling to contain himself.

"Well, if I'd had that pulled I'd hardly want to remember it, would I?" said Sleuth's pal.

Sleuth was with twelve people on Manchester Day and rang ahead to see he could get them into Salvi’s Cucina on John Dalton Street. All ok. Once there he asked for the ham and mozzarella platter to share, maybe with some seafood. Giovanni, the excellent manager, nodded and disappeared, reappearing fifteen minutes later with the biggest single food item Sleuth has ever seen. The platter was five feet long and groaning under the weight of the comestibles. Twelve people devoured the food and were stuffed. Then Giovanni said: “Now what about something, pasta perhaps, from the menu." Sleuth loves a tryer. 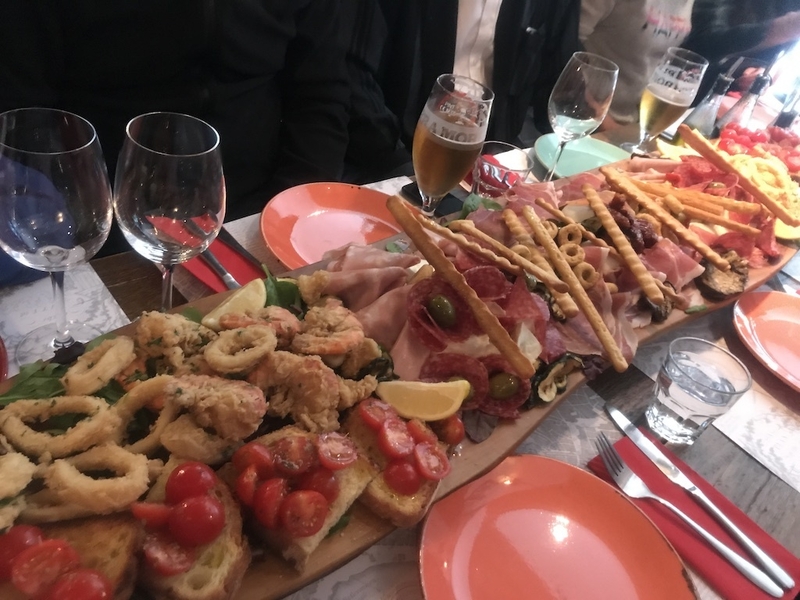 Goes to this guy making the most of a closed Deansgate for the Manchester Day parade. Look at him fly, no traffic, a clear run, people cheering him on, free as a bird, WEEEEEEEEEEEEEEE!