As Andy Burnham launches consultation, we ask if buses should be under his control

Greater Manchester will be the first city-region in the UK to hold a public consultation on the introduction of a bus franchising scheme, using powers available under the Bus Services Act 2017.

The Greater Manchester Combined Authority (GMCA) has given the go-ahead for a three-month consultation, after an extraordinary meeting was called on Monday (7th October). The consultation will run from the 14th October until the 18th January 2020.

For many of us, bus journeys are a fundamental part of everyday life. For low-paid workers who prop up the economy, older people who can no longer drive but still need to take part in their communities and young people starting out on their journey to independence, they are essential. Any regular bus user has experienced the frustration of a bus not turning up on time. Those of us who use it for work know that you have to work in the possibility of at least two buses not turning up into planning one’s journey time, turning a half an hour commute into an hour-long one. No wonder those who have the option of a car often prefer it. GMCA hopes that franchising will change that.

GMCA Vice Chair, Councillor Brenda Warrington, said: “Buses are an important part of the ‘Our Network’ ambition to create a modern and accessible public transport system for Greater Manchester. One which brings together different modes of transport into a joined-up, easy-to-use system with seamless connections, simple ticketing and an aspiration for capped fares.

“We want to give people the real choice to leave their cars at home, reduce the number of vehicles on our roads and their harmful emissions, so we have cleaner, greener neighbourhoods.

“This consultation will give everyone the opportunity to have their say on how the bus services are run, and we’re interested in hearing from as many people and organisations as possible.”

Even Boris Johnson gives the idea his seal of approval, stating: “I will work with the mayor of Greater Manchester on his plans to deliver a London style bus system in the area."

Since deregulation in 1985 - which allowed companies free rein to set routes and fares - passenger numbers, routes and frequency of services in Greater Manchester have all dropped by about a third.

However, the road to re-regulation has not been an easy one. The consultation is the culmination of a long campaign by Andy Burnham to overhaul Greater Manchester’s transport services. The Bus Services Act 2017 allows metro mayors in areas outside of London to create their own franchises for the first time. It is estimated that TfGM spent £20 million and two years coming up with the business case for franchising, in compliance with the Act’s requirements. After assessment by an independent expert, the plans have been deemed realistic enough for the public to now have their say too.

Franchising is an established model for providing bus services in many cities and regions across Europe. In a franchising scheme, local authorities will determine the details of the services to be provided – where they run, when they run and the standards of the services. Typically bus operators provide their services under contract to the local authority who can let whatever sort of contract they feel is appropriate.

It may come as a surprise to some that buses in Manchester are not already under such a scheme. The average bus user might be forgiven for thinking that there is some local authority influence on things like what routes a bus operator can go under and how they timetable them.

According to Dr Ian Bruff of the University of Manchester: “At the moment, the companies just inform TFGM about what they are doing, and while TFGM tries to have a long-term dialogue with the companies about provision, the companies ultimately can ignore them.” 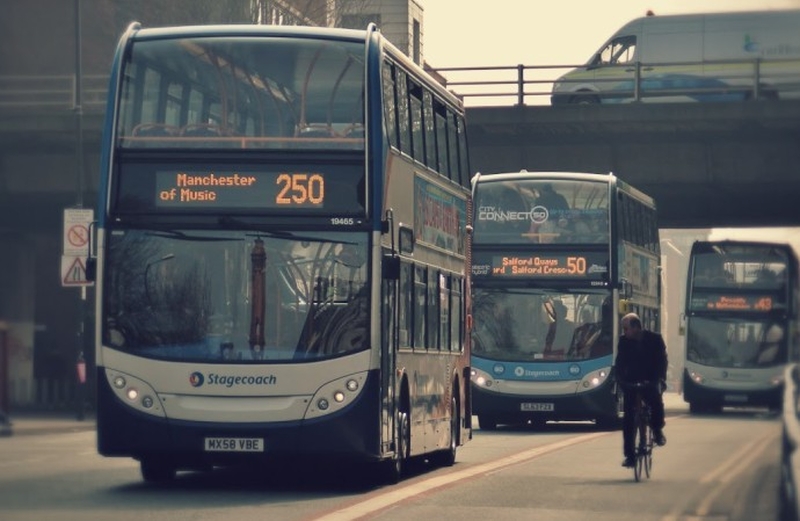 One argument against franchising is that a deregulated bus service is already dictated to by passenger demand rather than by the local council, putting control in the hands of the passenger. However this places a lot of trust in the machinations of the free market, which does not always respond sensitively to consumer need as much as it does to the lure of profit. According to Dr Bruff: “The current system clearly favours profitable commuter routes and not routes that connect communities and make sure all parts of Greater Manchester are well served. This will always disproportionately affect the poor, those who work unsociable hours (e.g. hospital workers, cleaners), and those who live more socio-economically deprived areas.”

Buses, after all, are a public service rather than a consumer luxury. Dismissing some routes just because they are not profitable is not really an option when we consider the public value they have.

It’s no surprise then that a London-style network is what the GMCA are after. Well-used buses, low fares and the relatively smooth functioning of the oyster card are all enviable qualities, though London commuters still have their fare share of public transport horror stories.

But what does a 'London-style bus service' really mean? It’s obviously a very different city so not all elements can be transported wholesale. For starters, London has a much larger population than Manchester, one that has for decades been used to the idea that you 'don’t drive in London unless you really have to'. In contrast, car journeys in Manchester are seen as not significantly more expensive than public transport, and often much more convenient, when ideally public transport should be both the cheapest and easiest option. It is this wholesale attitude change that Burnham is trying to implant with his youth bus scheme, but it will take a long time for that to filter through into the general populace.

The second difference is that London has a congestion charge of £11.50 PLUS the Ultra Low Emissions Zone (ULEZ)  which now operates 24 hours a day, seven days a week, every day of the year within the same area of central London as the congestion charge. Most vehicles, including cars and vans, need to meet the ULEZ emissions standards or their drivers must pay an additional daily charge of £12.50 to drive within the zone. TfL has predicted it will earn £220 million per annum from the zone.

Though many people fear otherwise, Andy Burnham has repeatedly ruled out the idea of a congestion charge for Manchester. However, the Greater Manchester Clean Air plan will operate in a similar way to the ULEZ, charging vehicles that do not meet emissions standards.

Greater Manchester has been tasked by the Government to bring NO2 emissions within legal limits. Part of the plan includes developing a clean air zone in which the most polluting buses, taxis and vans would pay a daily penalty of up to £100. The Clean Air Zone will be introduced gradually between 2021 and 2023.

According to a report by the BBC, 90% of Greater Manchester’s buses count as ‘high polluting’ (e.g. built before 2013) and would therefore be subject to the charges. However, unlike in London, private vehicles will be exempt from Manchester’s version of ULEZ, while bus fleets still in the process of upgrading their fleet would be hit hard by the charge, making the cost difference between travelling in a car and by public transport less stark and therefore potentially reducing the attractiveness of taking the bus.

Thirdly, the London Bus network is subsidised heavily, especially when the profit from tube fares is taken into account. According to The Evening Standard, Transport for London ran at £742 million deficit, largely due to the £722 million loss made by the bus network. It may be the City Hall considers this a price worth paying to keep London moving – however good the Tube is, it does not serve every area well and people need to get to work. A decent transport system is essential to any thriving economy and again, it may be the GMCA will consider that subsidising the bus service will be worth it to provide people with better access to work, study and leisure opportunities. GMCA have estimated the cost of moving to franchise to be £134 million over five years, significantly less than the TfL deficit.

Bus companies in Manchester have grouped together under the banner of 'OneBus’ to work against franchising, laying out their alternative vision for the future of Manchester’s bus network in a document available on StageCoach’s website.

Gary Nolan, Chief exec of OneBus, said: "There is now a chance for the public to have their say on what they want to happen to buses in Greater Manchester. If they want a fundamental transformation in bus services, including integrated ticketing, contactless payments and greener vehicles, our combined proposal to the mayor will deliver it – much sooner – without increasing public taxes or business rates.

“Greater Manchester can have a system that delivers what the public wants, but without getting ourselves into the financial mess that London is in: running up a £700m annual deficit, cutting routes, and losing passengers faster than anywhere else in England.”

So, Burnham can expect a fight. Operators such as StageCoach will not take the move to franchise lying down. The operator is already taking the Department for Transport to court over being barred from bidding for rail franchises due to issues with how it dealt with rail worker pension schemes, so no doubt it will be considering what legal moves it can make regarding franchising.

Not every bus company has decried the move, however. Dai Powell of the HCT Group, which owns Manchester bus operator MCT, said: “As a small bus operator in Manchester this is fantastic news, bus companies should welcome it! It will drive up passenger numbers, drive down congestion, improve air quality and make people happier. What’s not to like!”

Manchester v London, how do the buses compare?

There are currently around 40 bus operators in Greater Manchester, who offer around 160 different tickets. A single bus journey in London costs £1.50 and is integrated into the daily or weekly travel card price cap. The most expensive single fare in Greater Manchester is £4.40.

Department for Transport statistics show that the number of passenger journeys in England have dropped by 4.2% outside London since March 2005 and soared by 23.5% in the capital over the same period.

The Campaign for Better Buses has an online petition here. You can find out more about the OneBus partnership here.

The GMCA will open the consultation on franchising Greater Manchester's bus network on the 14th of October, 2019.

What would you ask Sir Richard Leese?
● / Features/Opinion