What? Hawksmoor at Home

Because they do things properly, Hawksmoor have taken their time putting together their new Hawksmoor at Home kits, which were introduced just before they revealed they are ready to take bookings for Hawksmoor Manchester. For those who’d rather experience Hawksmoor in their own homes (for now), this is the next best thing.

Do what they suggest, treat the ingredients with respect, don’t get too pissed while cooking and you’ll be fine

Kits serve two people and cost £120 including delivery. I’m not going to lie, it’s like the world’s best tombola when the box arrives and you start to pull back the sustainable sheep’s wool insulated packaging and dig around to pick out the goodies within.

Inside, you’ll find a plastic wrapped 35-day dry-aged Porterhouse steak, a bone marrow split in two and a pouch of Madeira gravy. There are also three ordinary looking spuds, which are actually a special range of potatoes developed for restaurants by uber-chef Pierre Koffmann. You’ll also find a jar of beautifully labelled Hawksmoor beef dripping, a paper bag of British Tenderstem broccoli and a puck of Gentlemen’s Relish butter. They’ve even thrown in a tiny tin of Maldon sea salt.

The box comes with an A4 sheet of instructions, but Hawksmoor have gone one step further and have included a copy of their beautiful 315-page cookbook – part back story, part recipe book and part industry love story. If you’re not up for buying the kit, I recommend you just order the book by itself.

Hawksmoor understand that for many people, the full experience includes an accompanying beverage, so (unlike most of the other lockdown DIY kits we’ve tried) drinks are included. You get a reusable bottle of Hawksmoor Ultimate Dry Martini (serves two), two cans of Hawksmoor branded lager, and a full bottle of steak-friendly Pulenta Malbec.

The kits arrive on a Friday, ready for the weekend. I did not want to spend £120 on a beautifully put together recipe kit and then cock it up by not following the instructions properly, so spent the larger part of Saturday immersed in the cookbook. (Did you know that Hawksmoor’s triple-cooked chips take TWO DAYS to make, or that co-owner Will Beckett travelled to Illinois to get tips in consistency from McDonald’s?) I also didn’t want to be pissed out of my mind dancing around the kitchen wearing the steak like a Lady Gaga tribute act and then falling face first into a pack of anchovy butter, so I’ve saved the double Martini for another day (I’m a lightweight, I admit it) – you just need to freeze it for two to three hours before it’s ready to drink.

Preparation is key. Take the steak out of its packaging 12 hours before cooking, then take that and the bone marrow out of the fridge one hour before. You can use a BBQ (although they warn against a chemical taint from inferior coals and firelighters) or you can use a cast-iron grill pan on the hob. They advise you to open the windows and remove the battery from the fire alarm, because there’s going to be A LOT of smoke. In the cookbook, you’ll find more detailed instructions on how to cook the perfect steak to your liking.

Meanwhile, peel and cut the potatoes into wedges, wash to remove the starch, boil to soften and leave to steam for 30 mins. Melt the dripping, add the spuds, roast for 30 minutes (although they actually take at least 20 more than that in a domestic kitchen). THEN you need to open the Malbec for half an hour before you drink it.  Gently tease out the marrow from the bone with a teaspoon and add to the pan warming the gravy. Steam the broccoli and slather with anchovy butter. (Obviously, if you’re writing about it, you then have to pause for another ten minutes to try and take photographs of it from every angle).

Yes, it really is. Believe it or not, our whole house actually smelled like Hawksmoor and, maybe it’s the Malbec talking, but it felt at the time as though they’d pulled back the curtain and let you in on a few little Hawsmoor family secrets. We padded it all out with some Yorkshire puddings and cauliflower cheese and it made a hearty and delicious Sunday lunch for our family of four.

Hawksmoor Manchester, 184, 186 Deansgate, Manchester M3 3WB (Bookings go live on Monday 6th July and the restaurant will reopen on Thursday 16th July for dinner during the week, lunch and dinner on Saturdays and all day on Sundays). 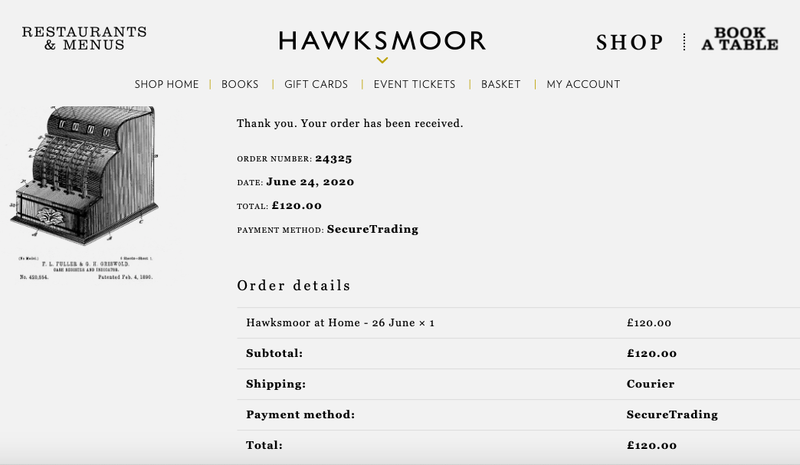 The focus is on value over cost here. Yes it’s £120, but it’s all excellent quality and has been grown/reared/produced slowly and carefully. You also get three drinks for two people and the cookbook, which retails at £30. There was plenty of it and the experience would set you back even more in the restaurant.

The box is all recyclable and the insulated wool is from Woolcool, a British B-Corp. The packaging for the steak, marrow and gravy is not recyclable but they’re working towards biodegradeable plant-based ‘plastic’ if Hawksmoor at Home takes off. Boxes are strictly limited to 500 per week over the next six weeks and available for nationwide home delivery via Hawksmoor website, so you can still enjoy the experience even if you live miles away from a restaurant.

Read the instructions (and the book), do what they suggest, treat the ingredients with respect, don’t get too pissed while cooking and you’ll be fine.

There is plenty and it’s all as tip top as you’d expect. My only (quite petulant) gripe is that the box doesn’t include a box of ‘Tributes’ – Hawksmoor’s after-dinner, salted caramel chocolates. However, that recipe is included in the Hawksmoor cookbook, although for those apparently, I have to purchase ‘a silicon pomponette 24 sphere mould’ and learn how to temper chocolate…..*books a table at Hawsmoor instead*.