Bored with biryani? Tired of tikka? Nonchalant about naan? These dishes might tickle your lime pickle.

It’s no newsflash that we love a good curry in Manchester. No matter which direction you shimmy, you will find an Indian restaurant, maybe even a mile of them. But with many remaining committed to the comfort of chicken tikka masala, pilau rice and naan, it takes guts and determination to open an Indian restaurant that features none of the above. Manchester is ‘the belly and the guts of the nation’ though, isn’t it? We like people doing things differently. Amma’s tick both of those boxes and then some.

Another essential dish (and staff favourite) is, deep fried nuggets of love

Amma's Canteen is a family-run restaurant with Chef Saju in charge of the food and his genial wife Ganga presiding over front-of-house. Their kids get involved too, acting as a discerning duo of food critics at the dish development stage, and their staff are like a big extended family. The menu is based on beloved family recipes, unpretentious but packed with flavour and well worth stepping out of your comfort zone for.

Adventurous or not, it can be overwhelming looking at a menu of unfamiliar names like Porucha Vendaka, Stuffed Kozhukattai and Karuveppilai Eral. Where do you even begin?

That’s where we come in, to act as food-gurus and guide you gently around the Southern Indian street food menu with a little help from Saju. In no particular order, here are our top ten dishes. 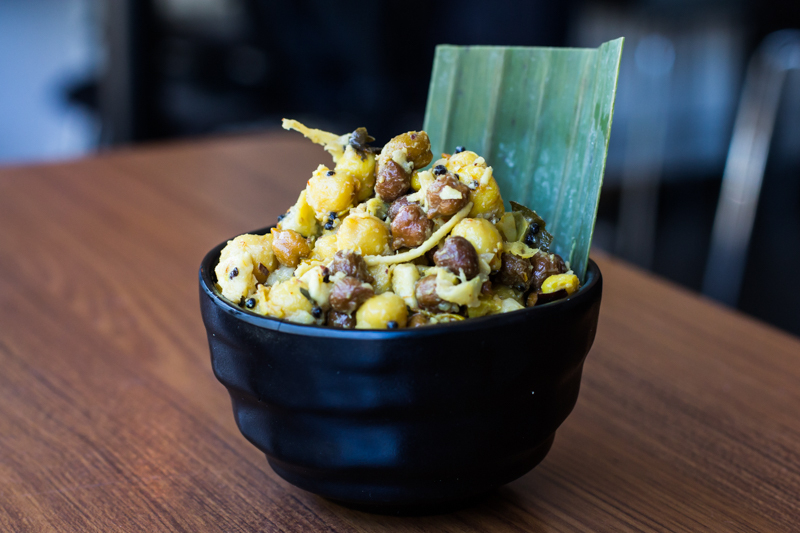 Saju says his menu celebrates ‘poor people food’, so where better to begin than with a dish that is given out for free at temples in India? Spiced Sundal features chilled, butter-soft black and white chickpeas (‘We’re not racist!’ says Saju) kissed with a slinky dressing which manages to be creamy, zingy and a little spicy at the same time thanks to lime, chilli and green mango. Curry leaves bring their unique character to the celebration and curls of fresh coconut are the party poppers. Sadly, with the price of curry leaves here in the UK, Saju can’t offer this for free, but £2.95 won’t break the bank. 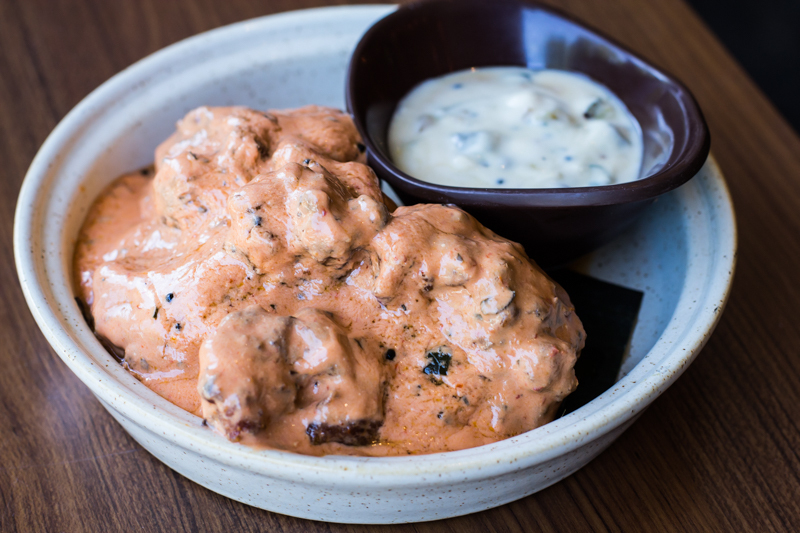 Keeping it veggie (for now), the spiciest dish on the menu - despite its sauce being mostly yoghurt with more yoghurt to dip on the side, Cauliflower Bezule (£5.95) has been a favourite of team Confidentials for some time. Ruth Allan loved this dish so much that she made it her dish of the year in 2017. We still love it in 2019 and you will too. 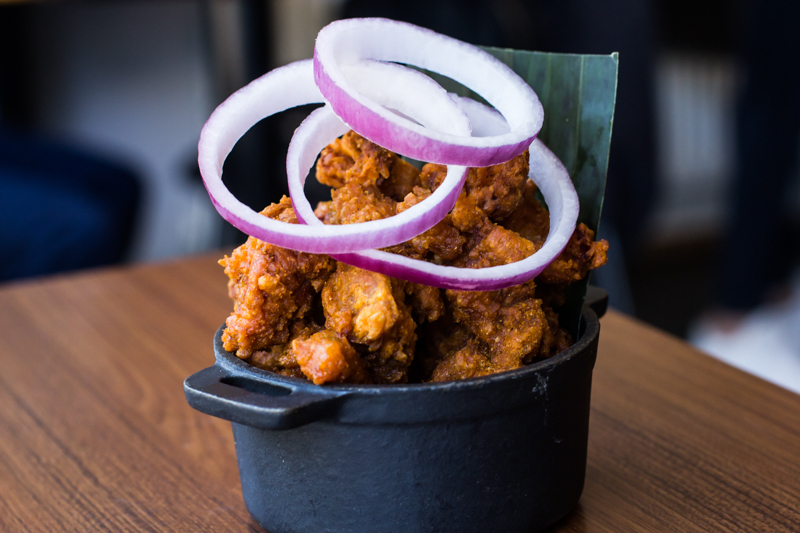 Indo-Chinese food is almost as popular as their native cuisines but Saju says the style varies depending on whether you’re in Delhi or Chennai. A perfect entry level dish from Amma's street food menu, with a cold beer, is crisp bar snack Chicken 65 (£6.55). Saju says to eat it by placing the chicken inside a ring of fresh red onion, ‘like a sandwich’. One of Amma's most famous dishes, Stuffed Kozhukattai (£5.95) may sound unusual but look familiar, like steamed dim sum dumplings. The veg filling is crisp with a kick of slightly bitter smoked chilli, a touch of sweet tamarind balances it.

Another crowd pleaser is Chilli Paneer (£6.95). If you’re late to the paneer party, it’s a mild white curd cheese that holds its shape when cooked, a bit like firm tofu (which they can swap out if you’re vegan). It soaks up flavours like a boss, and there are plenty to soak up. 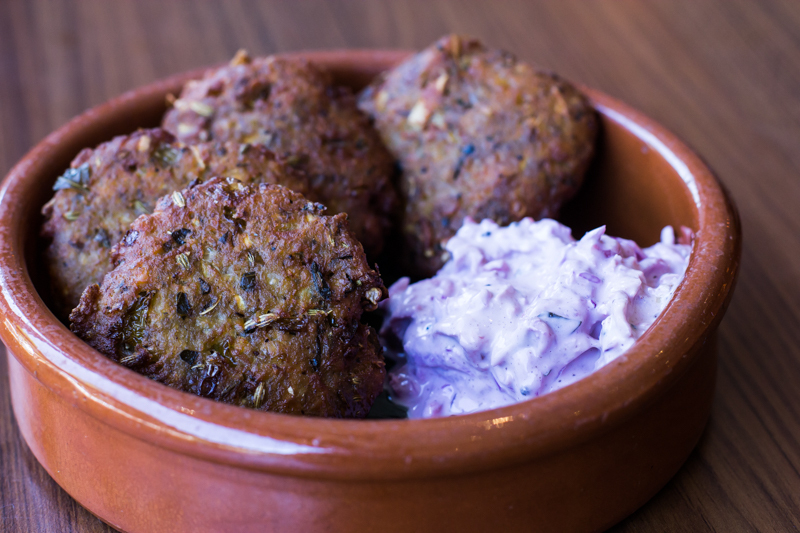 Falafels, while dependable can be a bit… boring. But to call Amma's Masala vadai (£4.95) falafels is not doing them justice. Yes they are discs of pulverised pulses, spiced and deep fried, but they are unlike any falafel we’ve eaten. Fennel, cinnamon and some Saju magic elevates these from unimaginative vegan option to absolute must-have no matter what your dietary requirements. Another essential dish (and Amma's staff favourite) is, deep fried nuggets of love, Madras Masala Mussels (£6.95). Even if you’re not a fan of mussels, these might convert you. Packed with the typical flavours of Southern India, they’re like an Indian, seafood version of popcorn chicken. Addictive.

Keeping with the seafood theme, Sauteed Prawns (£6.75) are sweet, mildly spicy, smoky and left us speechless. One of grumpy Gordo’s favourite dishes. 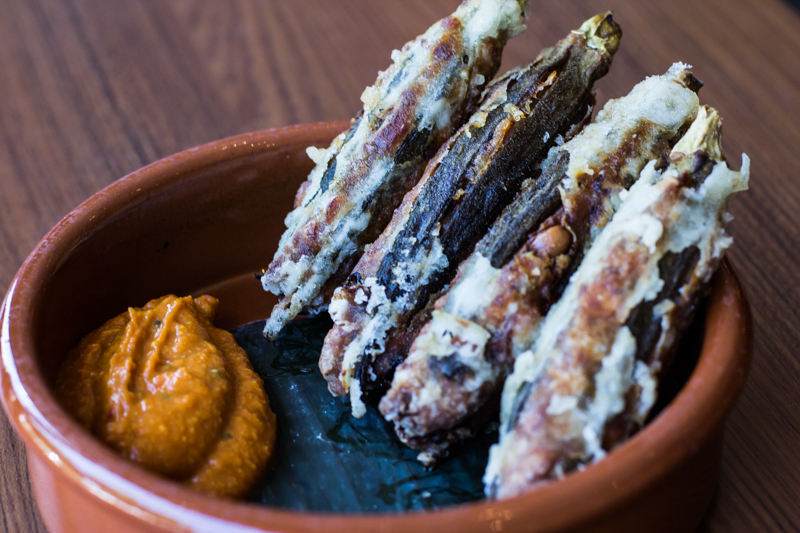 You may have had okra fries, but have you had okra that has been stuffed til bursting with peanuts, dried fruit, spiced lentils, hummus and then deep fried? Well now’s your chance with Porucha Vendaka (£5.95). Lastly, a bit of controversy with Beef Sukka (£6.95), Saju (who is a Hindu) tells us he has had a bit of stick for selling beef as many Indians don’t eat it. But he says that that Hinduism is a very personal religion and many Hindus, especially those in the South and poor people who lack the luxury of choice, do eat beef. The gutsy shredded beef stands up to the spices and marries beautifully with the coconut. We absolutely loved this dish and, if you choose to eat beef, we highly recommend it. About a third of Amma’s menu is vegan or adaptable to vegan diets and the vast majority of the dishes are gluten free.

For a more in-depth insight into Saju's life as a chef and the story of Amma's, see our Top 100 interview here