THE silence of the lambs. I recall my previous visit to Glossop, nigh on a decade ago. An equally squeamish writer friend and I had volunteered to witness the workings of the indie abattoir at the town’s estimable butchers, Mettrick’s.

On the train we’d screwed our courage to the sticking place but at journey’s end were spared the experience. That day there’d been only a small intake of animals and by the time we arrived even the blood had been swilled away. To compensate we got to share a lurching Land Rover ride with moor top farmers inspecting their flocks. “Lads, look at the tail on that Gritstone!”

Still it’s good that the gentrifying mill town now has more carnivorous options to squeal with pleasure at. Foremost among these is Hyssop, open in The Bulls Head, Old Glossop, since November.

On the back of supper club and pop-up success Paul Sykes and Jess Hine have commandeered the kitchens and three cottagey dining rooms inside this listed 1600s hostelry – itself recently rescued and revivified.

To avoid any grass-fed flashbacks I order whitebait, lobster and brill. OK, along with Derbyshire beef meatballs and duck two ways, in Thai-influenced dumplings and pan-roasted. You can’t be too doctrinaire about pub menus that demonstrate real ambition.

It’s a sure sign of such ambition to have a bookshelf showcasing the young chef’s culinary heroes. From our table I’m drawn to the bright yellow spine of Simon Rogan’s fascinating new cookbook. Connection? Paul, still only 26, was already at The Midland when Rogan took over The French, scattering the L’Enclume stardust, even if the Michelin judges looked the other way. Paul didn’t. Front of house Jess confirms Rogan’s a major influence. A good start.

Paul trained at Gordon Ramsay at Claridge's in London and has worked for Michael Caines and at The White Hart, Lydgate. Jess, 23, is a trained pastry chef, who was part of the launch team at Stockport’s Where The Light Gets In.

All very well, but how good is our £5 battered whitebait going to be? Utterly exceptional, crisp little critters, dipped in garlic mayo and swiftly despatched. Equally welcoming are chunks of springy sourdough, sourced from the indie Grains Bakehouse on the High Street. It’s the equivalent of so many city centre restaurants taking the Pollen route rather than baking their own.

We share a trio of starters, each more substantial than expected. A tangle of crispy parsnip twirls hides four meatballs (£6) on a bed of parsnip puree. With a hand-pulled pint of Marble Bitter or, from not so distant Sheffield, a Kelham Island Pale Rider (yes the Bulls Head is cask savvy too) they might make a pub lunch in their own right. We stick with a bottle of Albarino ‘Terra dei Asorei’ (£24.50) and a glass of silky St Emilion Grand Cru Benjamin de Sansonne off a wine list supplied by top merchants Gerrard Seel.

A beautifully textured lobster salad with firm salt-baked beetroot, walnuts and leaves (£10) is the subtlest dish on a menu of big flavours.

The puddle of Thai green curry sauce swaddling the Chinese-style duck and mushroom dumplings (£8) is not the stuff of pub chains. It’s fresh, lush and herby but distracted from the delicately spiced, shredded duck.

All Farrow and Ball smart now, The Bulls Head was bought by another Old Glossop pub after a residents’ campaign saved it from housing conversion. Once it was a Robinsons’ house that back in the day had specialised in curries. Hence their tongue-in-cheek homage of a ‘tandoori fish of the day’. Brill on this occasion, at a spanking market price of £22, but its ample sweet flesh is perfectly cooked on the bone inside a tandoor paste carapace that for me was a mite too coarse. Accompanied, cutely though, by blobs of sweet potato puree, raita and mini onion bhajis.

Pan-roasted duck breast, oriental cabbage and leeks (£17) is our other main, getting the spice balance here just right. There are slim pickings for vegans. On the menu you move swiftly on past baked celeriac to 32-day aged beef, sirloins and rib-eyes, with beef fat chips.

Among the puddings, it is good to see chocolate ‘crumb’ rather than ‘soil’ adding heft to a chocolate delice and its perfect partner, blood orange sorbet. That costs £6.50, as does my duck egg tart with rhubarb sorbet. Maybe the pastry could be crisper, but its ethereal egginess and nutmeg overload ups the squeal factor.

Early days, but Hyssop looks a real grower. Top-notch kitchen talent is obvious and it’s got location in its favour. Old Glossop is a picturesque step-up from sprawling Glossop proper, straddling the A57. We chugged over via a clogged M67, its street lighting switched off as if to register Hyde and Denton as the heart of darkness.

The train is a much better option. Turn left out of the station, avoid all butchers and stretch your calf muscles for quarter of an hour until you hit the cobbles. 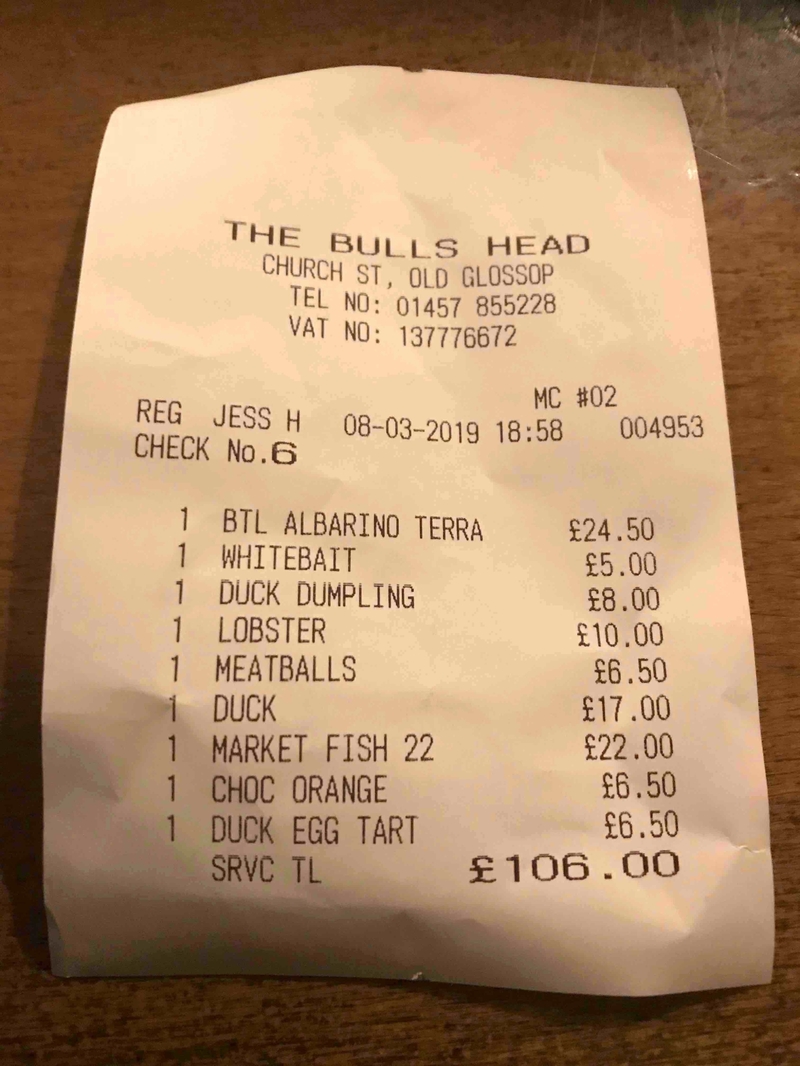