This exciting new collaboration will be available for one week only

They thought this day would never come. Richard Carver, head dough man at Honest Crust swore he would NEVER put chicken on a pizza. There is even a sign over their pitch in Altrincham’s Market House proudly proclaiming ‘we don’t do chicken.’ But now, for one week only, they’ve decided to break one of the longest standing rules of Honest Crust for a special week-long collaboration with Curry Mile favourites Mughli Charcoal Pit in Rusholme.

The story began five years ago, on a typically grey, drizzly summer’s day in an otherwise unassuming car park in Chorlton, when Mughli’s co-owner Haz Arshad first fell in love with Honest Crust’s superb wood-fired pizza. A restraining order then friendship soon followed, as did talks about a potential collaboration, but various openings, pop-up projects and events on both sides got in the way.

Now the diaries have been cleared and the stars have aligned resulting in not just got one incredible pizza collaboration, but two. The first includes Mughli’s world-renowned, rich and creamy butter chicken.

The ‘Forgive me Napoletana, for I have sinned’ combines Honest Crust’s signature sourdough base and house-milled passata sauce (made from tomatoes imported directly from Italy) with Mughli’s halal, smoky tandoori chicken and fresh mozzarella, finished with a garlic, lemon & fenugreek olive oil and Aleppo chilli ‘gunpowder’. A rich, aromatic and gently-spiced warmer.

“This will be the first and last time we put chicken on one of our pizzas so wouldn’t want to do it for anyone else” says the otherwise Neopolitan-purist, Richard Carver.

During the test run, the smoky tandoori chicken drew in the curiosity of the crowd as well as approval from the Honest Crust team. The fact that it only took one take sealed the deal.

Mughli/Honest Crust have also created a vegetarian counterpart, ‘The Mughli Malai’, a fresher and lighter pizza with great flavours and textures – admittedly, says Haz, the better for it. A Cimi di Rapa broccoli puree with smoky mozzarella and charred Malai-broccoli stems, dotted with Mughli’s Malai sauce, toasted almonds and finished, again, with the aromatic fenugreek oil and aleppa chilli gunpowder.

Both pizzas are available for one week only, 12th – 17th November, from Honest Crust’s Mackie Mayor kitchen.

Mughli will be dropping off supplies each morning, but once they’re gone, they’re gone - so get there early if chicken on a pizza is your thing because Honest Crust are unlikely to bend the rules for anyone else. 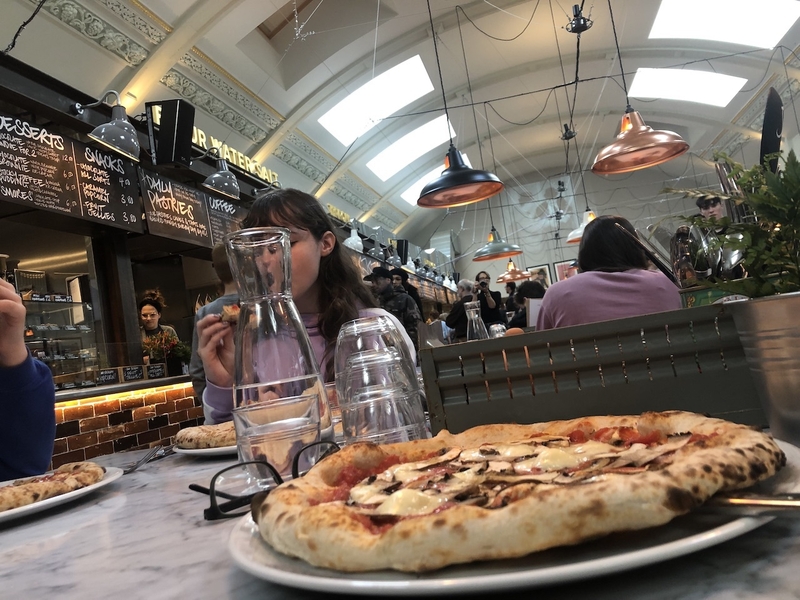