The Top 14 Gastropubs In Manchester & Beyond 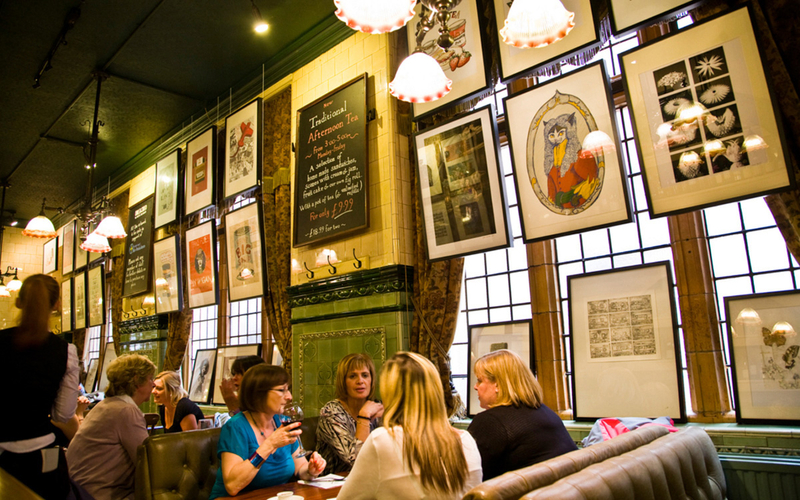 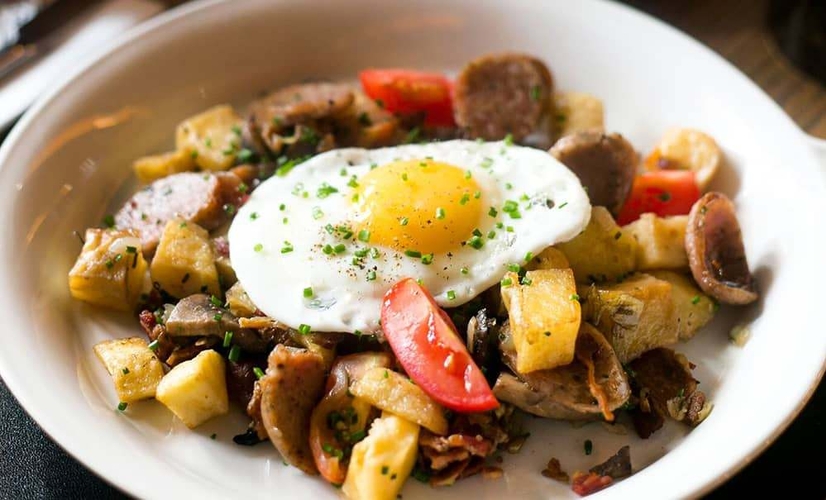 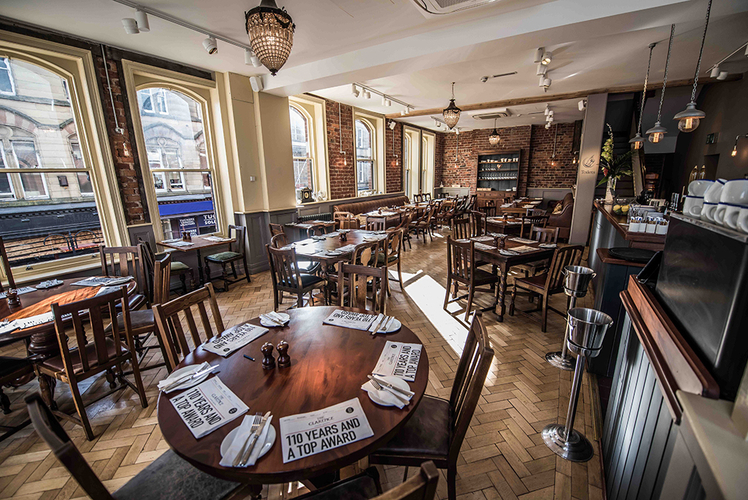 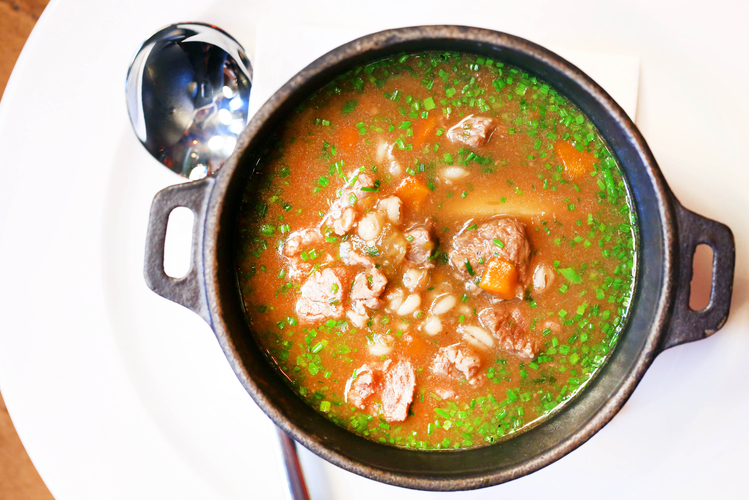 Fancy popping out for an English? Here's a list of the region's best foodie boozers

WE'VE all ‘gone for a Chinese’ or have been out for a curry, but what’s the general saying for eating good old British scran? Phrases for eating English, Scottish, Welsh and Irish heritage dishes hardly roll off the tongue. We might sometimes tuck in to a good old chippy tea, but ‘popping out for an English’ hasn’t really taken off.

Maybe it’s because the rest of the world seems to have poured scorn on our native dishes; our steamed puddings, dumpling-ridden stews, pies and pasties. What even is English food? And how far are we going back? Remember, even the humble spud originally came from Peru.

Regardless, since proper chefs managed to stave off the demise of our pubs sometime in the early-00s with good, honest grub served at a decent price in warm, unpretentious surroundings, the reputation of British food has been elevated beyond recognition, with some of the very best English nosh now found lining the tables of our humble boozers alongside a pint of two of mild.

Below we've listed in no particular order the best dining pubs within (or within a reasonable drive of) Greater Manchester, serving the kind of top-notch traditional dishes that make you want to plop down by the fire, kick off your wellies and hum Jerusalem. 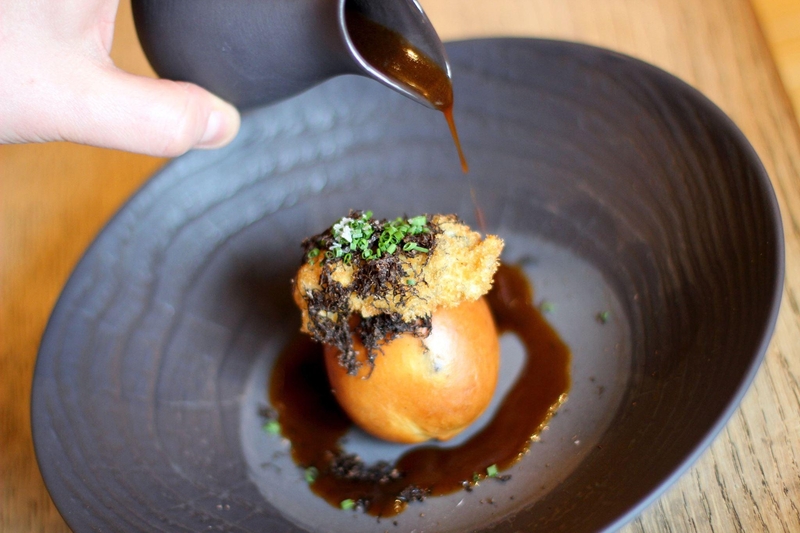 Choice dish: The Famous Corned Beef Hash Cake (£7) Home-made corned beef (10 days in the making) and potato, topped with a soft poached egg and their own brown sauce.

These three city centre institutions are a pantheon to great British cooking. Most ingredients have been sourced from the UK and they describe themselves as offering ‘classic British cooking with a modern twist’. Their breakfast menu features dishes almost lost in the midst of time, such as Omelette Arnold Bennett, Gateshead bacon ‘Floddies’, Stoveys and Povey’s (a kind of pikelet or flat crumpet) from Staffordshire. As well as simple chops and steaks, their main menu is full of hearty, rib-sticking fare such as fish pie, rabbit Wellington and steak and mushroom pudding. How much more British can a menu get than featuring bread and beef dripping along with Cumbrian mutton curry?

This award-winning independent restaurant was established in 2014 by Lee and Lottie Hollinworth in order to showcase the very best of British and local Lancashire produce. The four storey building has been lovingly restored to its original 1905 Victorian grandeur and they even boast their own microbrewery in the basement.

Hearth of the Ram, Ramsbottom

There have been many discussions on whether this place qualifies as a pub or a restaurant, but it describes itself as a restaurant and bar. Owners Euan and Dena Watkins have over two decades experience in hospitality as well as travelling regularly around the world to soak up the latest culinary influences. They put as much effort into the drinks as they do the food and each dish on the a la carte menu has a well judged wine recommendation listed next to it. There is also a menu of simpler beer-loving fare; Scotch eggs, sausage rolls, ploughman’s platter etc, all made by hand on the premises and some of the best examples of their ilk.

The Bird at Birtle

‘Great Lancashire fayre with flair and imagination’ is stamped across the exterior of this Lancashire pub, little sister of the renowned and long-standing Nutter’s restaurant in nearby Norden. The Nutter family were keen to use their knowledge and experience to develop a gastro pub that the whole family could enjoy as opposed to their, perhaps more special occasion flagship restaurant.

Dishes and menus are rotated on a regular basis due to the seasonality of ingredients and quality of produce. There are a few European influenced dishes on the menu as well as a lot of straight down the line heritage dishes such as beer battered sole, sausage and mash, smoked haddock rarebit and corned beef.

The White Hart is the village pub in Lydgate, one of many villages collectively known as Saddleworth, nestled on the edge of the Pennines. There’s been an inn on the site since 1788 but its current incarnation has been around for twenty years and has earned consistent mentions in all the top eating and drinking guides. They’ve cleverly divided the pub into sections to include private dining rooms, a brasserie for more traditional dishes in front of the cosy fire and The Dining Room where Chef Mike Shaw offers five or seven course tasting menus which allow him to show off some of the skills he’s picked up from previous mentors including Richard Neat and Raymond Blanc.

A bit of a drive this one at 30 miles away from Manchester city centre, but as this is the highest ranked pub to be listed in the Good Food Guide 2017, as well as coming top in practically all the other esteemed food guides, we had to include it in our list. The website reads: 'Freemasons at Wiswell, combines country pub, shooting lodge, a slice of gentrified refinement and adds a twist of contemporary creativity and flair to create the perfect setting for a memorable gastronomic experience'. They have four menus to choose from, whether you want some hearty pub grub or something a little more refined. They also hold regular clubs and annual events such as game dinners and wine tastings.

Chef Stosie Madi has been quietly building a reputation here since taking over the Parkers ten years ago, picking up a raft of accolades in recent years including a 'Top 100 UK Restaurants' nod and a Taste of England award, which prompted a visit (and subsequent glowing review) by The Observer's restaurant critic, Jay Rayner. Half-French, half-Lebanese and raised in The Gambia, Madi is a truly gifted cook obsessed with local ingredients (and not the usual 50-mile radius version of 'local' peddled by unscrupulous restaurant chains, we're talking front door, back garden local). The Parkers offers modern and mostly British fare, including game pies and clever things done to black puds, as well as the odd exotic splash such as Caribbean crab and Lebanese sausages. We're told Madi's Sunday Roast is worth the hours drive north of Manchester alone.

Winners of ‘Best Food Pub’ in the Manchester Food and Drink Awards 2016, they have ex-Volta and former MFDF 'Best Chef’, Alex Shaw, heading up the kitchen. The Eagle and Child have gone back to basics, cooking ‘Grandmas favourite classics’ such as slow braised shoulder of Bowland lamb and a highly rated Sunday roast. Their garden is the base for Incredible Edible Ramsbottom and is where they grow a lot of their own seasonal fruit and vegetables, and keep chickens. Owner Glen is incredibly community-minded and recruits unemployed under-25s, including young offenders, through a scheme called EAT Pennines, to train them in hospitality.

We decided to include both of these Cheshire pubs in the same listing, as not only are they very close to each other but they’re both among a group of seven inns and pubs owned by the award-winning Cheshire Cat Pubs and Bar company. Also, they’re almost impossible to separate with only half a mark between them in Deanna Thomas’s review of The Church Inn (16/20) and Neil Sowerby’s review of The Bull’s Head (15.5/20). These pubs are all beautifully refurbished with quirky (but not overdone) touches and a warm buzz about them. Cosy in winter, a great place to cycle to in summer and a good feed at any time of year.

This 'Dining Pub of the Year' boasts daily changing menus based around the best produce their suppliers have on the day. Their seasonal menu is available at lunch and dinner service mid week, and the full a la carte menu on weekend nights gives Chef Tom Parker (ex-Northcote) the chance to show real flair. In fact, in his review Neil Sowerby describes it as ‘a meal that was a kind of Northcote in miniature’.

This was the first Ribble Valley Inn from Northcote Chef Nigel Haworth’s Lancashire based gastro pub group. The Three Fishes, a whitewashed stone inn situated in the picturesque hamlet of Mitton in the rural haven of the Ribble Valley, has recently celebrated its twelfth anniversary. Their shtick is uncompromising sourcing from local food heroes and hearty regional dishes championing Lancashire’s culinary heritage. The main menu features dishes made using Morcambe Bay shrimps, Lancashire cheese, Goosenargh chicken and duck and there’s also a seasonal specials menu and a Chippy Tea Friday offer. RVI pubs have a great children’s menu too which comes with a copy of their own comic – word searches are all full of Lancashire food terms – we approve.

Spanish Sunday Lunch at Escape to Freight Island
What you say
Got an account? Login, to comment/rant.
0 Opinions
Read Next
● / New Openings