Kelly Bishop tries a vegan alternative to the golden arches but is it Instagram vs reality?

Everybody should be eating less meat. Factory farming on a global scale is not only horribly cruel but it’s contributing to climate change - not least because of all those farting cows.

Like many millennials, I am trying to minimise my consumption of meat and dairy. I flirt with vegetarianism like a bicurious girl flirts with lesbians. Pork keeps winning. I’ve not been tempted to go the whole (jackfruit-based) hog yet.

Simply in having a choice, I speak from a grossly privileged position, of course. The cult of veganism has well-documented impracticalities for much of the world. Food is a social and political issue difficult to scratch the surface of in an 800-word review of a fast-food joint.

My job is to criticise the dining experience, so here we go.

The Frost Burgers brand started in Liverpool, its renown down to tattooed fashion-goth founder Monami Frost and her 1.6 million followers on Instagram. But on both of my visits, a Saturday lunchtime and a Friday evening, the place is less than half full.

Off Portland Street’s chewing gum speckled pavement you’ll find the steps down into the new Manchester basement diner. There's none of the usual fast-food buzz (or aggro), just polite environmentally-minded pairs taking shelter in a sort of underground safety bunker for vegans. The stretch-lobed staff are as friendly as they come and happy to answer any questions you might have but I'm afraid it has about as much atmosphere as an abattoir's waiting room.

It looks like an abandoned laser quest: all fluorescent graffiti, neon signs and cages. Naff slogans like “badass street food” and “plant-based 1000%” (grr) emblazon the walls. I wonder what an item of street food has to do to qualify as "badass".

Fake meat is big business and, as vegans will tell you, it’s not all the same. Nor is it necessarily good for you or the planet. Seitan makes my stomach bloat like a Tetrapak of forgotten oat milk at the back of the fridge. I prefer soy, though a lot of people can’t tolerate that either. It’s a minefield.

Frost's menu is emblazoned with cartoon images of towering burgers that bear about as much resemblance to the real thing as a bus stop poster does to the burger you buy with the voucher on the back of your ticket.

My vegan pal has eaten her Bacon Free (£7.75) in the time it takes me to cast my mind back to the last time I ate McDonald’s - at least a decade ago. The “meat” patties here are reminiscent of Maccy D’s, and a staff member confirms my suspicion that Linda McCartney is the dealer. My friend reckons the “bacon” is Quorn. It’s interesting that in a world of modern meat alternatives vying for the meat-less market, big OG supermarket brands are what Frost has gone with.

I’d like to see more of this stuff made in house. Black beans, tofu, mushroom, cauliflower, cavolo nero, cashew, endless spices and herbs to play with, so much joy can come from plant-based food, just ask Ottolenghi. But I guess that’s not the market Frost is after.

I reckon the world is divided into those who would run screaming into oncoming traffic at the mere mention of the word ketchup and those who want all the sauce, all the time (that’s me). I visit Frost Burger twice, both times with a different sauce-o-phobe. On my first visit, my burger (The Scorpion, £8.75, depicted with licking flames) seems to have my mate’s rejected sauce on it as well as my own. It’s approximately 80% sauce - a bit much even for this saucepot and is either missing a burger or two are very tightly compacted together under all that gloop.

The Scorpion's spice level hits around the lower third of the Scoville scale with a blend of chipotle paste, Sriracha, jalapeños and chilli “cheeze”. I love posh cheese but when it comes to burgers, only the Americanised naff orange squares with little resemblance to the real deal will do. So this is one of those rare instances where gob-textured vegan cheese is acceptable.

Frost’s “chicken” burgers are also bought in from a wholesaler. A Chicken Free (£7.75) on my second visit has the ground texture of frozen chicken burgers from a dodgy van rather than the fleshy hunk in seasoned batter you might find at, say, Yard & Coop but I don’t hate it. It's thankfully seitan-free and the breaded coating is nice and crisp. The salad is plentiful and the zingy sauces like “Not honey” and mustard add interest. A side dish of nuggets is similarly mealy, like something you'd throw in the oven with some Alphabites when feeling utterly unable to "adult". They can't be far different to their meaty hermanos that are mostly rusk anyway.

My Saturday date's Double Trouble (£8.75) is the most impressive and it's what I'd get if I went again. It almost looks like its menu cartoon self with decent melty cheese on two patties and a middle bread layer. He's a meat eater and likes burgers more than I do - and he's been dragged to the likes of V-Rev many times by our vegan mates. He's impressed.

Curly fries (£4.25) are crisp and as good an example as any of the seasoned spirals. Baconaisse, sriracha mayo and garlic mayo all do decent dairy-free dip duty.

The range of “milkshakes” on offer, plant milk whizzed up with vegan-friendly confectionary like Oreos and Lotus Biscoff - are not my thing at all. Instead, I’m more than happy with a Karma lemonade (£2.25) at lunchtime and a malty Cloudwater Vienna Lager (£5.50) in the evening. The range of beers is small but mighty and features a lot of no and low choices too, in case you’ve got the straight edge.

It’s a tricky one, this. I get that whatever your chosen diet, you occasionally want something unchallenging and fast and that is what Frost Burger capably provides. But there’s a gap in this exploding market for something in the middle ground between sprouted chickpea salads and deep-fried wholesale burgers. Somewhere that convinces people like me to eat vegan more often. Frost Burgers is not cheap. There is a cost to the planet and biodiversity that comes with eating meat but there is also, apparently, a premium that comes with eating meat-free. Could that be a contributing factor to how quiet this place is?

Despite ticking the cheap junk boxes in terms of taste and texture, both times I eat at Frost, I leave without feeling greasy and guilt-ridden. It reminds me of why I like a vegetarian full English breakfast more than its meaty equivalent. I’m certainly not kidding myself it’s a healthy option.

If you are a vegan that loves junk food, you’re probably going to love it. If Frost can take that business away from the likes of McDonald's, I wish it all the luck in the world. But with prices more than double those of the famous chain and closer to a higher-end burger joint that at least makes its own patties, it might not convince the undecided.

I’m not lovin’ it so I’ll be sticking to the lentil casserole and Ottolenghi for now. 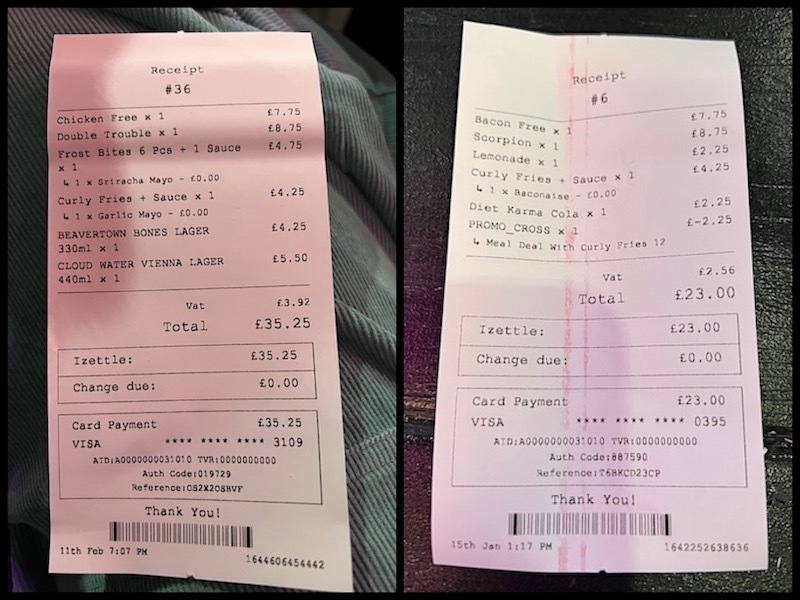