FRAICHE the Michelin one star restaurant on The Wirral, has a reputation of being a bit up its arse.

When Gordo was boning up on the place it was easy to see why, particularly if you, like Gordo, take the time to read the rambling three thousand word bio on the restaurant’s web site; full of terms that the Confidential Editors won’t allow (delicious, delight, dazzling) in our reviews. That website doesn’t do the chef, Marc Wilkinson, any favours. 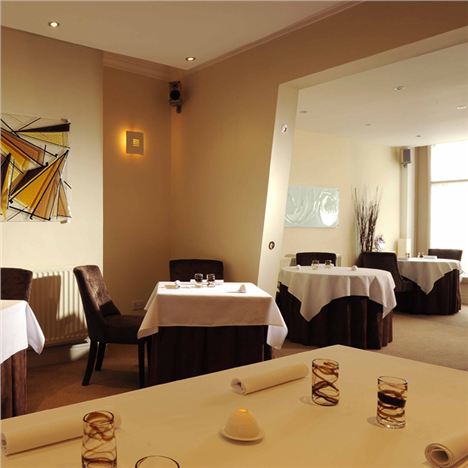 Yet several trusted sources other than Michelin have pushed Gordo to give it a try. After more reading, it started to look to Gordo that maybe there was more to this chef than meets the eye.  This man is anything but saccharin.

He seems to have done the hard yards of working his way through the system, from washing up (so he could to buy a bike as a teenager) through being trained at a family run French restaurant in Yorkshire all the way to becoming the head chef at the Mirabelle in the Grand Hotel at Eastbourne.

Not a dainty kitchen by all counts.

Unlike a certain lunatic chef who will remain nameless, it was only after he knew his basics inside-out that he started to experiment with ‘modernist cuisine’ following a visit to one of Gordo’s favourite restaurants, Pierre Gagnaire in Paris.

Today finds this chef in a small, smart but welcoming restaurant in Oxton, on the Wirral. The place is twenty-five minutes from Liverpool, maybe forty from Manchester. 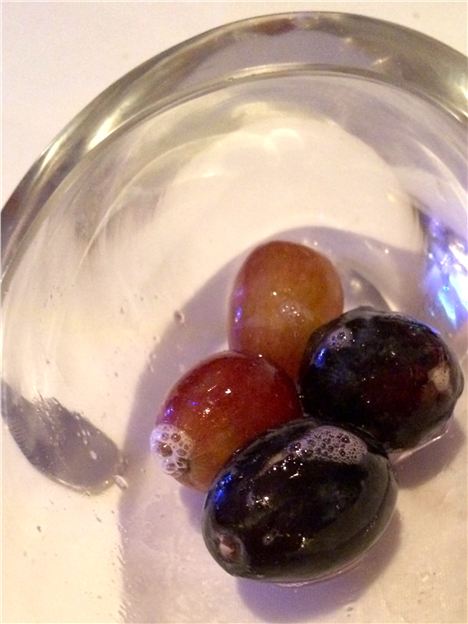 Oxton is in a conservation area and very pretty. Walk in through the front door and the room, along with the staff, gives a warm welcome; small, with less than twenty covers, it’s by no means crowded.

Wilkinson gives diners plenty of space. In fact there are only fourteen covers. If Gordo were involved there would be twenty, in fact, throw out the Christmas tree on the pre-festive visit and another two could be added

Anyway, it’s a bit hushed and quiet. The couple on the next table, smartly dressed and in their early sixties, spoke quietly, but with cut glass accents that could  slice steel for battleships. It was not difficult to realise they were in the early stages of dating. Miriam was talking about ballet.

The other tables mumbled along in twos and fours, most had started and were on their second or third courses. Gordo was beginning to agree the place was indeed all a bit arsey. 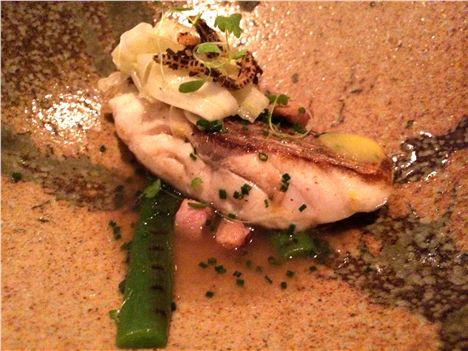 It was a pecan nut, by the way. There were seven of them.

Baked, one at a time, in Tinkerbelle's oven. She’d spent all afternoon painting them with ambrosia, sprinkling it with the spices she’d stolen from an incense-bearing tree in Kubla Khan’s gardens, close to that that sunless sea of his.

It was clear that Wilkinson, from this first offering, wasn’t.

The front of house comprised of two young, engaging, knowledgeable and funny professionals who clearly love what they are doing and hold the chef-patron in great esteem. They know their subject, Wilkinson’s food, intimately. They have, by all accounts, refused all bribes to spill the beans on precisely how those nuts are made. 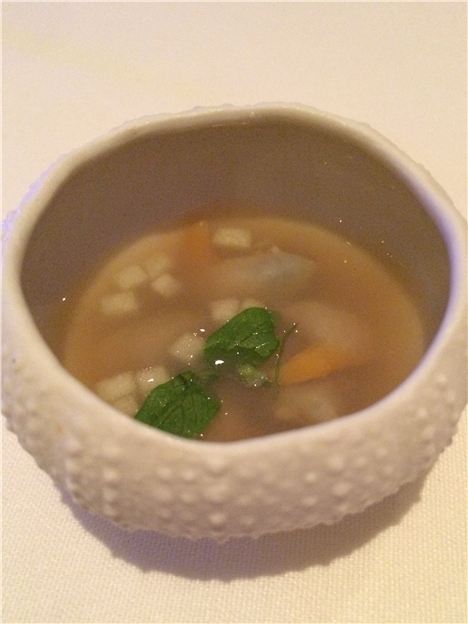 Three fat olives arrived, along with two large, elegant glasses of Louis Roederer champagne (£10). They were in a bowl with a lid on. Take that off, and smoke wafted out. The olives soaked up the aroma, delivering more originality, matching the Roederer with its biscuit notes.

Then came roasted foam oyster leaves, cockles and lastly mussels; just three porky ones, in half an inch of their own broth, tasting of the harbour wall in Honfleur.

Did Gordo mention the bread and butter? Two different pats of butter, one of them made from goats cheese. The bread floated around the table, as if on a slow motion hovercraft. I challenge any restaurant anywhere in the world to do better. 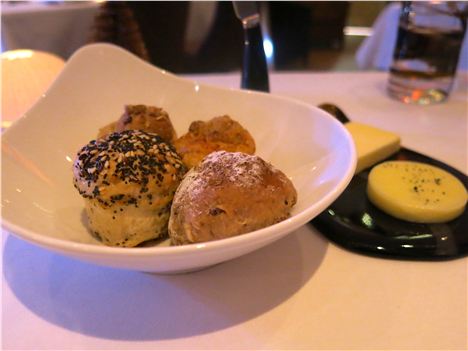 Gordo was talking to the maître d’ about that Christmas tree. A couple of tables behind had fallen silent, listening to Gordo quietly going on with himself. The cut-glass accented Miriam was still on about the ballet, this time about the Russians, trying to score points.

It was several bangers of upper class boffs. The table of four across the way burst out laughing, Lottie Moore nearly wet herself, the Maître d’ just didn’t know what to do and Gordo, always calm in a crisis, simply carried on whinging about the Christmas tree taking up space.

“I think we’ll just forget about that shall we?”

Artichoke and hens egg with crispy chicken skin is marked in Gordo’s notes as the dish of the evening. Sea bass wasn’t too shabby either, whilst the venison was wonderful. Gordo dislikes sous vide cooking with red meat. Apart, that is, from sweet, berry-noted loin of venison, a beast that probably did time in a royal park, gorging all autumn on hedgerow fruits. It was bloody wonderful. 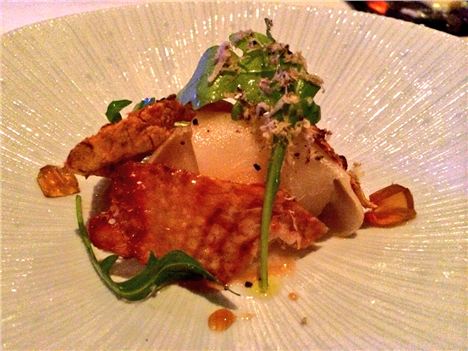 The puddings were overshadowed by all that had come before; they were good, but not great. A pre-dessert was messing about with nitrogen; “a bit too much pussying about” read Gordo’s notes.

Marc Wilkinson needs to work further here; it seems to be missing texture, maybe he should be working, in deference to his French training, pastry into the set. Modernist cuisine tends to be a bit too refined when it comes to puddings, they aren't big on textures, with too much reliance on sugar. This needs to be more 'French'.

It is one of the four or five best trolleys the Fat One has had in his life, it equals Bocuse in Lyon and Moulin de Mougins above Cannes in its heyday twenty-five years ago.

The Maître d’ went through each of the twenty-five on offer. We made our choice and they make a very pretty picture. 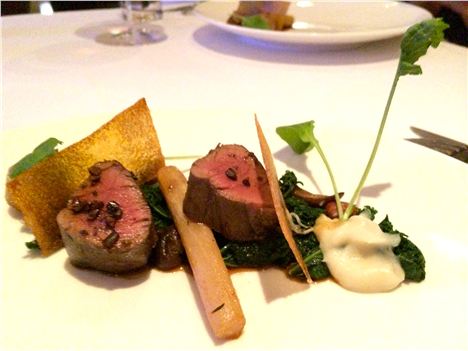 He describes his cuisine as ‘French Contemporary’. His classical French training has stood him in good stead. He doesn’t have an over-reliance on it, but his dalliance with modernist cuisine gives his food an edge that stands the experience apart from the other Michelin chefs here in the North West. 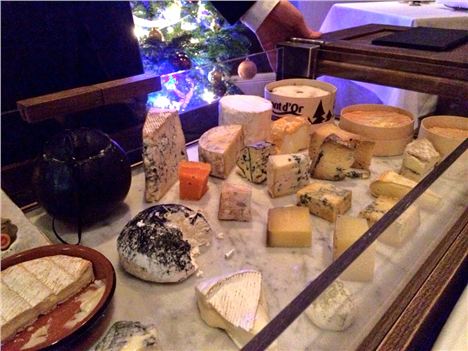 He isn’t better; just very original and striving to stand out. The Simon Radley complete experience at the Grosvenor is more luxurious, whilst Rogan is The Master; but, dear reader, a set menu for dinner at £65 from this feller is worth walking over hot coals for.

The amazing thing, and why there are only twelve covers, is that Wilkinson is in that kitchen on his own. Just a KP helping. Gordo was gobsmacked when he was told. A truly remarkable set up.

Rating: 18.5/20 (please read the scoring system in the box below, venues are rated against the best examples of their kind) 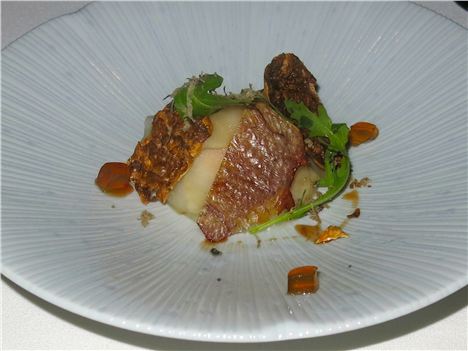 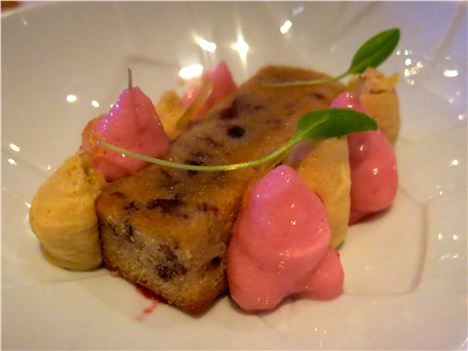 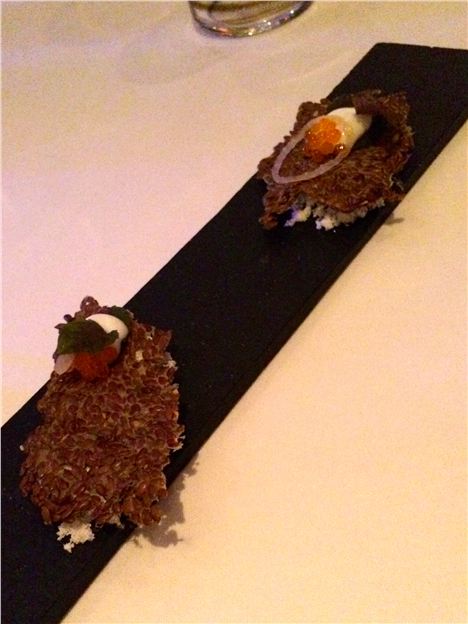 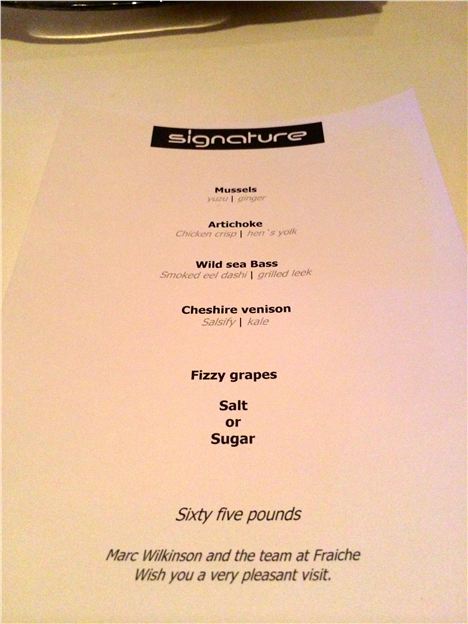 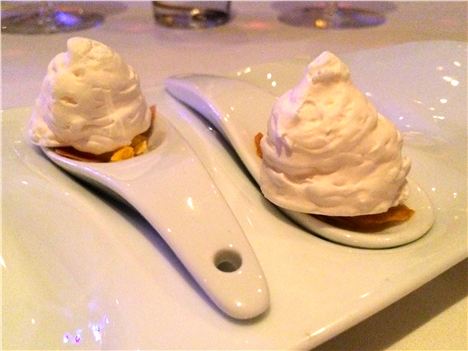 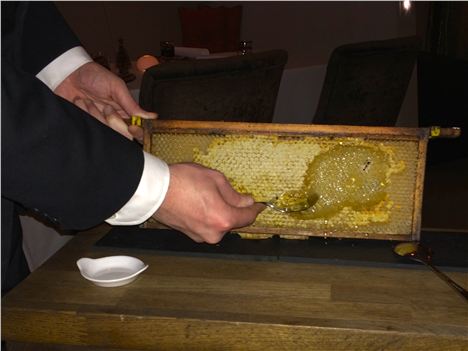