Neil Sowerby takes tea with Hercule Poirot in the Palace

‘YESTERDAY, all my troubles seemed so far away’… Yes, it’s a first. Here I am Beatles duetting with a 93-year-old Turkish jazz legend as the ghost of Agatha Christie looks on. Don’t miss the afternoon tea at the Pera Palace Hotel, everyone had told me. I expected the spread of macaroons, eclairs and finger sandwiches but Ilham Gencer tinkling the ivories of a Schiedmayer grand was a bonus. Every day between 3pm and 6pm he’s open to requests.

Need a place to hide away? Istanbul’s first Western-stye luxury hotel dating back to 1892, has had £20 million spent on its sensitive restoration. Room 411, Agatha’s favourite, may not look exactly the same as when she stayed back in the 1920s. She’s credited with writing parts of Murder On The Orient Express, with Hercule Poirot at the helm, in the Pera Palace.

There’s much more evidence about Kemal Ataturk’s regular patronage of the hotel. The founder of the modern Turkish state’s room (101, no kidding) is kept as a museum, packed with his possessions and open to the public twice a day.

Amazingly, Ilham Gencer was born just nine years after Ataturk’s first visit in 1917. He and his piano share the soaring Kubbeli Saloon with Carrara marble columns, six turquoise glass filtered domes (kubbeli) and a riot of gilt and flowers. The Orient Bar beyond is more subdued; its star quality is framed on the walls – photographs of 20th century celebs for whom a stay here was de rigueur – Sarah Bernhardt and King Edward VIII, Greta Garbo and Jackie Kennedy, Alfred Hitchcock, Ian Fleming and Graham Greene. Oh and inevitably Ernest Hemingway, who emptied the bar of whisky and also has a suite named after him. My room was much less grand – let’s say bijou.

We assume the great writer took Turkey’s oldest working lift up to his quarters. It has been a star beneficiary of the restoration and is quite regal with its red velvet bench. Equally heritage is a sedan chair in the hall, once used to transfer guests from the Sirkeci Station, terminus of the Orient Express, a mile and a half away.

That’s across the Galata Bridge in Sultanahmet, Old Istanbul, where you’ll find all the major tourist sites. Those on a tighter budget or preferring more of a buzz should find lodgings around here. The old cliche of ‘the city that never sleeps’ certainly applies to Istanbul and the rush hour traffic can be Armageddon on wheels. That’s a spoiler alert: avoid car hire.

On the other hand, the heart of Sultanahmet beats at a slower pace. It helps that this UNESCO World Heritage Site is a peninsula bounded by bodies of sea to north, east and south (the Golden Horn, Bosphorus and the Sea of Marmara, respectively) and by the old city walls westward. Essentially, this is what used to be called Constantinople, capital of the Roman and Byzantine Empires. Hence the must-sees all cluster here – Hagia Sofia, the Blue Mosque, the Grand Bazaar, the Hippodrome area, and the Topkapi Palace. 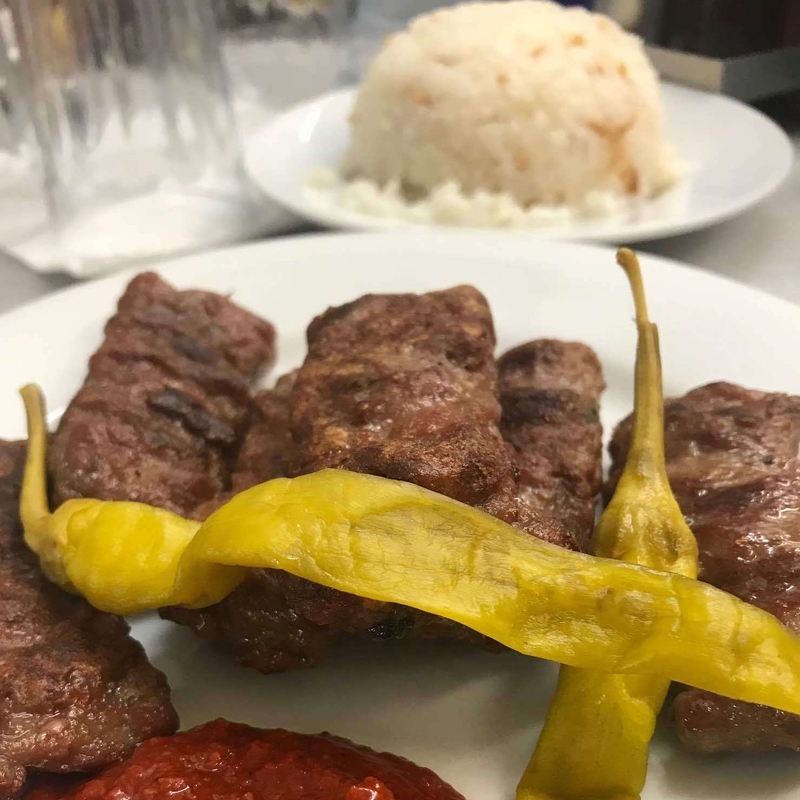 But first a national treasure in its own right – Istanbul’s ‘meatball central’, Sultanahment Köftesi Selim Usta. These days they have an offshoot in Manchester’s Rusholme but it  lacks the authentic charm of the original restaurant which dates back to 1920. Cue more framed photographs and thank yous from less familiar worthies on the walls of the narrow, no frills dining room, just two minutes’ stroll from Hagia Sophia.

Big surprise is that the köfte are İnegöl-style, so log-shaped. As well as beans, they come with a spicy red pepper sauce and pickled green chillies. Best then to wash them down with the tart yoghurt drink, ayran. 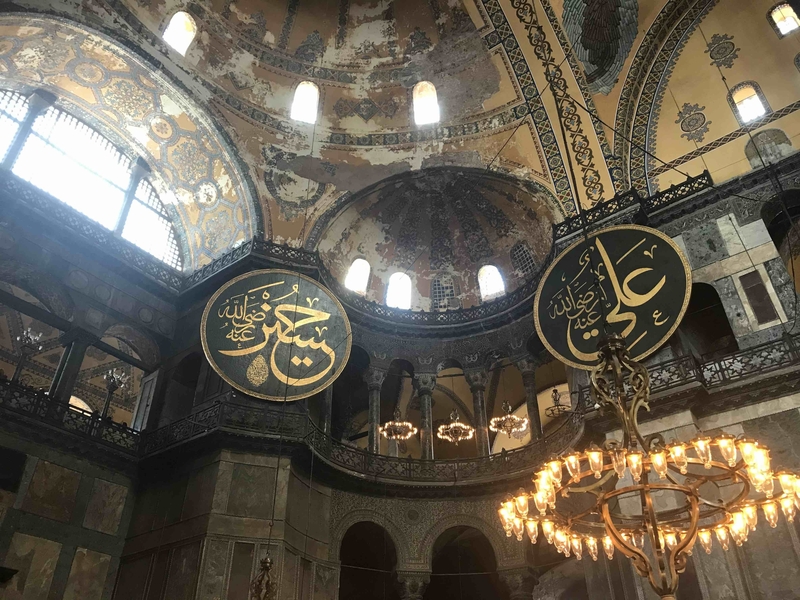 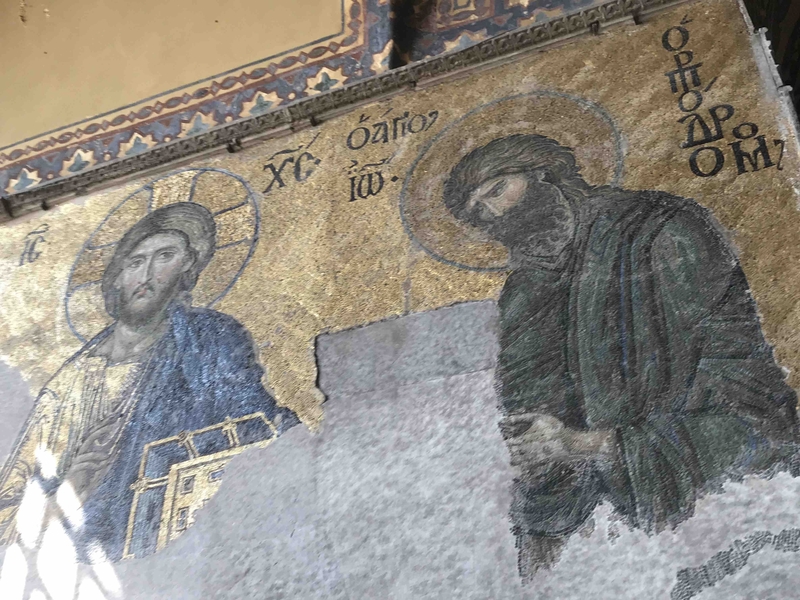 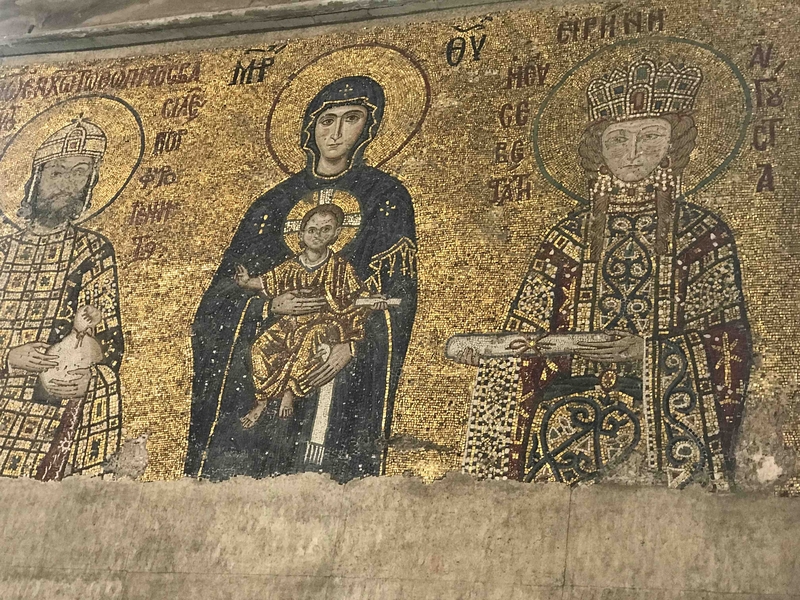 Suitably fortified, tackle the building that sums up the entire history of the city. Dating back to the sixth century, Hagia Sophia has been Christian cathedral, Imperial mosque and, since an Ataturk edict in 1935, museum. If the rest of the human race is not your thing don’t go at peak times.

What immediately takes your breath away is the dome, 30m in diameter, 56m in height. Forty substantial ribs, resting on four pillars concealed in the walls, support it. Byzantine historian Procopius likened the dome’s apparent weightlessness to being “hung from heaven on a golden chain”. The low-lying chandeliers were a later Ottoman addition. Best views are from the upstairs galleries where you can get up close to the surviving vestiges of mosaic.

The nearby Sultan Ahmed Mosque, dubbed The Blue Mosque on account of its abundant blue Iznik tiles, is in the middle of extensive renovation inside and out, which ruins much of the spectacle. You can’t see the dome. Still its six shimmering minarets, more than in any other Istanbul mosque, hint at the architectural glory that will one day return. Shorts are forbidden and headscarves are provided for women to enter the mosque.

Much more fun was the Basilica Cistern, built underground in the sixth century during Justinian I’s reign as the main water reservoir for Constantinople. Row upon row of semi-illuminated columns stretch like some dripping anti-room to Hades. Which seems appropriate when you make it to the furthest recesses and encounter two huge stone Medusa heads. Since Medusa was a female Gorgon able to turn people into stone with her gaze the heads are turned either sideways or upside down to avoid that eye contact.

The Cistern is recognisable movie location, notably for From Russia With Love. It featured in the Dan Brown best-seller Inferno, but for conservation reasons the film version had to recreate it in Budapest.

It would be impossible to recreate the Grand Bazaar anywhere. Arguably the world’s largest covered market, it has 60 covered streets and over 4,000 shops. It’s much less anodyne than our modern malls but, such is the choice of goods, ultimately just as enervating. From gold to rugs to Turkish delight, there’s the good stuff and the ersatz stuff. There are guides who might be able to push you in the right direction – or maybe just in their uncle Yusuf’s. 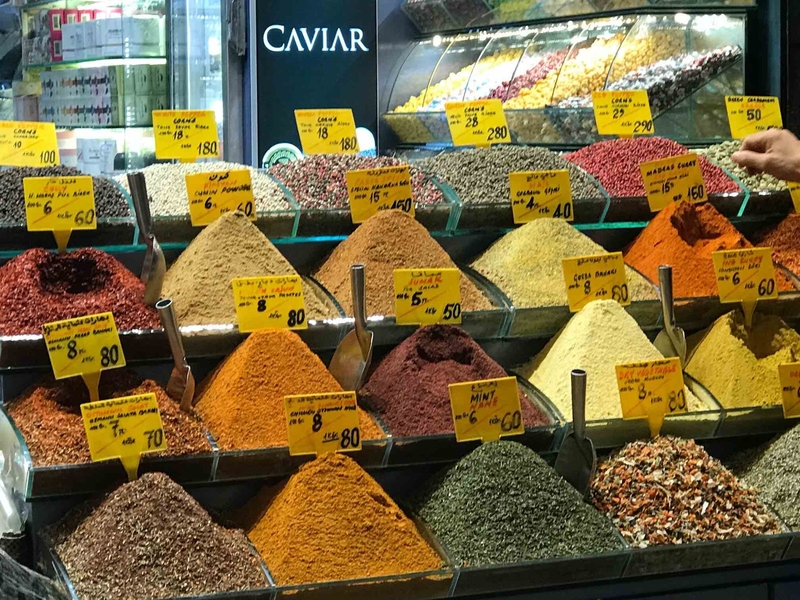 The Spice Bazaar, down by the Bosphorus waterfront, is much more manageable. It helped to have good local advice on where to buy top quality, if pricey, Iranian saffron. It hasn’t disappointed. Aesthetically the sloping market hall with its mounds of colourful spices and nuts is a delight. Almost as exciting as the view outside across the straits, which have been the high water mark of so much turbulent history.

How could we resist a cruise, aperitif in hand, local fish on the grill, with a chance to ogle a shoreline of seriously expensive properties? Now restored, these were once the decaying Ottoman mansions described so vividly in Orhan Pamuk’s melancholy memoir, Istanbul. The 2006 Nobel prize-winner is out of favour with Erdogan’s belligerent regime. They should treasure him. It is hard not to share Pamuk’s sense of wonder about the Bosphorus.

Our final dinner in Istanbul encapsulated all that romance. Feriye is a rather cool restaurant in a waterside palace complex. It has a perfect view of the mighty Bosphorus Suspension Bridge (or 15 July Martyrs Bridge) linking Europe and Asia. In the gathering dusk its strings of lights framed ferries and tankers sliding by. Alongside it a  floodlit mosque looked miniscule. Off the Feriye menu we shared tender octopus and lamb kebab. With a surprisingly good Turkish Merlot we toasted that infinite continent that begins across the straits. Quite a city.

Why Istanbul is perfect for a stopover...

Turkish Airlines are nothing if not ambitious. Already they fly to more destinations – 300 – than any other in the world. Their grand plan is to build the new Istanbul Airport into the planet’s largest, set to rival Dubai and Singapore as a global hub. It all makes commercial sense, given Istanbul straddles Europe and Asia with access north to Russia and south to the growing markets of Africa. Even as a work in progress the airport, operational since April, is mightily impressive and when the rail link into the city is complete in 2020 it will make Istanbul even more attractive to visitors. A taxi can now take 45 minutes; the train will cut the journey by half.

Nearly 13.5 million foreign tourists visited Istanbul in 2019, a quarter up on the previous year. Those numbers could swell significantly if travellers take up a generous Stopover Offer from TA. They’re encouraging folk changing planes for an ongoing flight at their hub to spend time in the city – and they are effectively subsidising it.

Economy customers can enjoy a one-night stay for free in a 4* hotel when they have a stopover lasting more than 20 hours, while Business Class travellers can enjoy two nights in a 5* hotel. You can also enjoy a free tour of Istanbul for free if you have a six hour or more layover between flights. For full details and conditions visit this link.

Neil flew from Manchester to Istanbul as a guest of Turkish Airlines. Economy return flights in the spring can cost from as little as £200 return. It takes four hours each way. Travel Business Class and take advantage of Istanbul Airport’s Turkish Airlines Lounge, among the best in the world with amazingly fine Turkish buffet. The food on the planes is no up to this standard but holds its own against rival airline fare. It is created by Turkish Do & Co at a special food hub at the old Ataturk Airport.

Neil stayed at The Pera Palace Hotel, Meşrutiyet Caddesi No:52, 34430 Tepebaşı Beyoğlu/İstanbul, Turkey. In the upmarket district of Jumeirah, the hotel has 115 rooms and suites. Room rates for spring start between £123 and £146.

What you say
Got an account? Login, to comment/rant.
0 Opinions
Read Next
● / Nightlife