Eight of the best things to eat in Manchester - December 2019

It’s cold and frosty outside and you can no longer move through Manchester without a Xmas market sausage pointing at you from various directions. As much as we’re tempted to pull the warm duvet over our heads and stay in bed until spring, we’ve got to get up and carry on. Thank goodness for comfort food and this month, our team of professional scoffers have got together and made a list of what’s really worth eating in and around town right now. 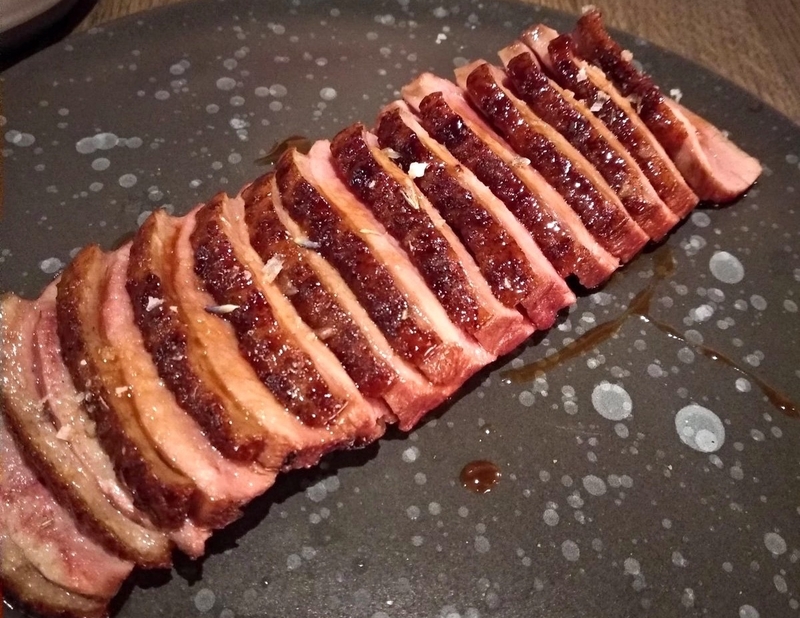 Fig leaf oil, dill pollen, kelp mole, lamb fat yeast flakes crowd across the menu at the bar/restaurant briefly known as Wilderness Bar + Kitchen before its enforced name change. The launch ethos remains the same. Head chef James Lord employs techniques honed working with Aiden Byrne, but the forage-meets-ferment ingredient roster bears witness to the Wolf team’s inspiration-gathering pilgrimage to Copenhagen. Let’s call the result ‘Eye Scandi’ or ‘Reasons to be Resinous’. The basement kitchen is not averse to a spot of pine smoking. It works a treat with the duck, whose age I didn’t like to ask. At £22 for a generous fan of slices it’s at the ‘mains’ end of the small plate menu. The lavender honey glaze is understated yet gorgeous. Not a culinary curve ball. Duck meets lavender is the signature dish of New York’s three-starred Eleven Madison Avenue. We expect it to accompany its chef Daniel Humm when he opens imminently at Claridges, on the site of Simon Rogan’s Fera. For a fraction of the price explore some surprising culinary territory in an unlikely corner of the Northern Quarter. Neil Sowerby 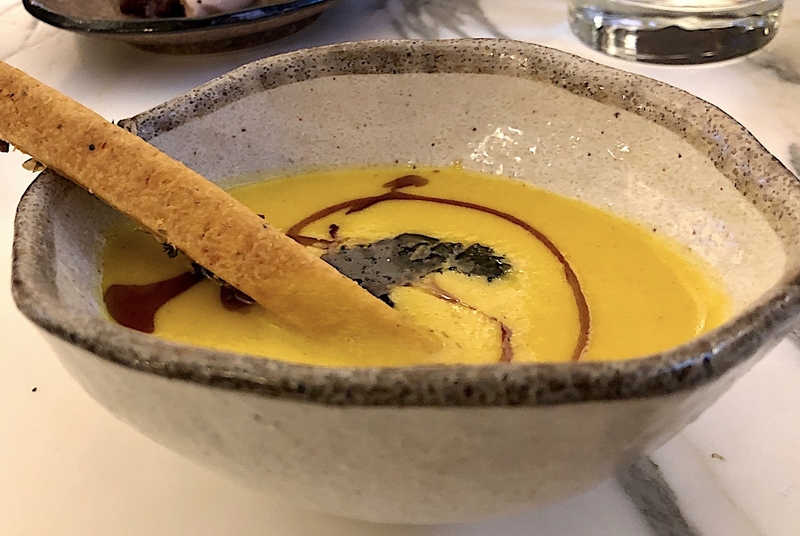 There’s something wonderful about pumpkin soup. The colour, texture and fragrance are perfect at this time of year and Tom Kerridge captures the magic of this seasonal favourite at his new gourmet pub, The Bull and Bear. For starters, the dish is just the right size - a small cup full, thank you - and the subtle additions only add rather than taking away. There’s a homemade, so-rich-its-almost shortcake cheese straw, and a little swirl of pumpkin seed pesto. Kerridge knows his squash too: the Crown Prince is a connoisseur's choice and while some of the menu could do with super-sizing - that’s you, steak pie - I wouldn’t change a thing about this little gem. Ruth Allan 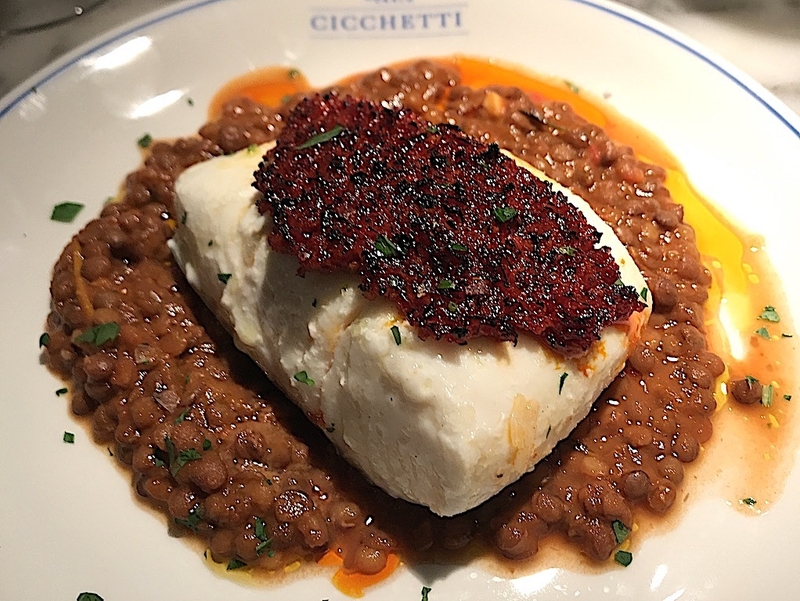 The things you end up doing in this job. I went to Cicchetti for lunch and ended up making gnocchi with TV chef Aldo Zilli who is chef consigliere of the San Carlo restaurant group. Aldo was a lot of fun and the gnocchi we made were tremendous, obviously, but it was this cod dish that really grabbed me by the gills. I’m a fish lover but I’ve always found cod a little bit dull - and too often woolly - compared to the likes of sea bream and sole. This was something else. Cooked sous vide the flesh was firm but succulent, its pure, clean flavour cut through by the sweet, salty and spicy (is there a better combination?) nduja crust. Crispy on top and melting beneath, I nearly slid off my chair in rapture. A bed of earthy lentils added comforting winter-warming substance. Further proof that the best food is all about sourcing top-notch ingredients and putting them together well. Just a perfect dish. Kelly Bishop I rarely order chicken outside a KFC in the UK as us Brits are useless with it. Overcooked, undersexed and over here, we don't seem to be good at rearing them nor, indeed, cooking them. We're obsessed with being poisoned with salmonella and subsequently the poor blighters are delivered dry and tasteless to the dining table.

The French really aren't that shit hot about making love apparently, but one thing they are especially good at is cooking chicken. The breast needs to be cooked to precisely 63 degrees. It is then moist, cuts like butter and tasty.

Imagine Fatty's surprise when arguably the best roast chicken supreme was delivered to his lunchtime table in a restaurant inside the Royal Exchange Theatre.  Sat on a bed of brilliant mashed potatoes, being guarded by one of those fabulous king mushrooms sliced in half lengthways, slightly charred and scattered with porcini and bacon crumbs for seasoning, it was an unexpected and delightful plateful. Well done all. You've won my respect. Gordo 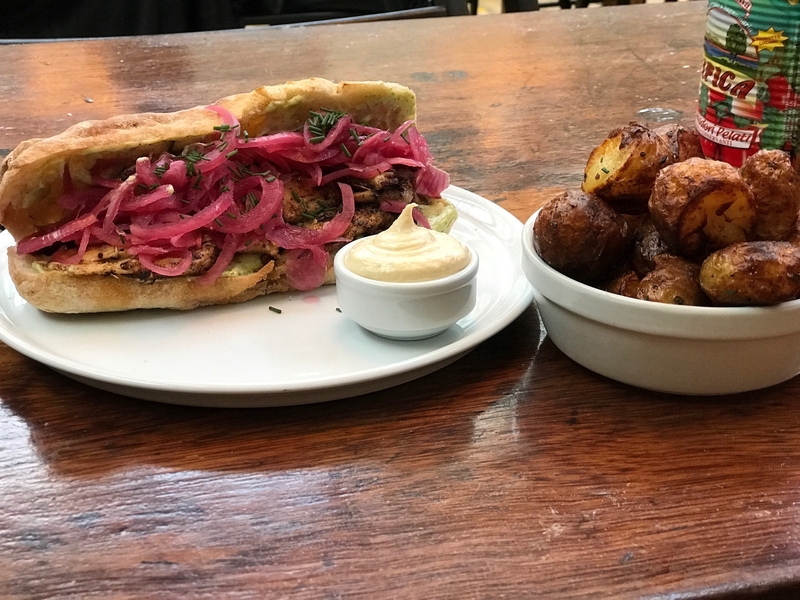 Like a fashionista, but for food, I’ve noticed I go through flavour fads that can be anything from Dolcelatte to daikon. A certain something will just keep leaping out from menus at me until I succumb. Duos are especially high on my list, with pear and almond (classy) and salt and vinegar (less so) being recent favourites. My current obsession is tarragon and chicken, a classic pairing as exemplified by the roast chicken and tarragon sandwich from Rotisserie at Mackie Mayor. The chicken is succulent and juicy as you’d expect from Rotisserie, who specialise in such things. The meaty flavours are then lifted by grassy, aniseedy notes of tarragon trapped in a fine mayo, just to be extra-French about it.  A generous layer of pickled red onion brings piquancy and I added some roast potatoes with aioli (£4) just because I could.  A perfect flavour duet aided some great backing singers. Lucy Tomlinson 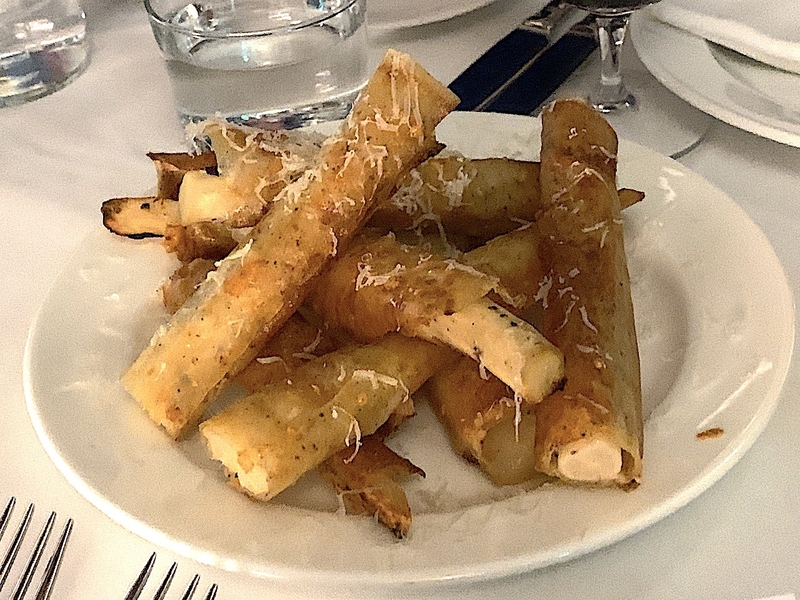 The point of these monthly features is to pool our resources and stand behind the current dishes we recommend. So to pick a one-off dish that is not generally available goes against the grain. However, this was part of a new series of events called ‘A Book from My Kitchen’ – so although you might not be able to get hold of this particular dish any more, keep an eye out for the next event. The idea is that Bistroteque invite a famous chef up for one night to cook a series of favourite dishes from their favourite cookbook.

This time they coaxed Soho icon Jeremy Lee from Quo Vadis who was inspired by dishes from Elizabeth David’s classic cookbook ‘An Omelette and a Glass of Wine’. Salsify is a much-underrated spindly root veg, but when peeled and baked gives off a comforting sweetness somewhere between a spud and a parsnip. Jezza/Liz wrapped them up in thin brik pastry (recently featured in the last series of Bake Off) liberally sprinkled with Parmesan cheese to create a definite death row dish. The recipe’s here if you want to have a go making the best Xmas party snack EVER. Deanna Thomas 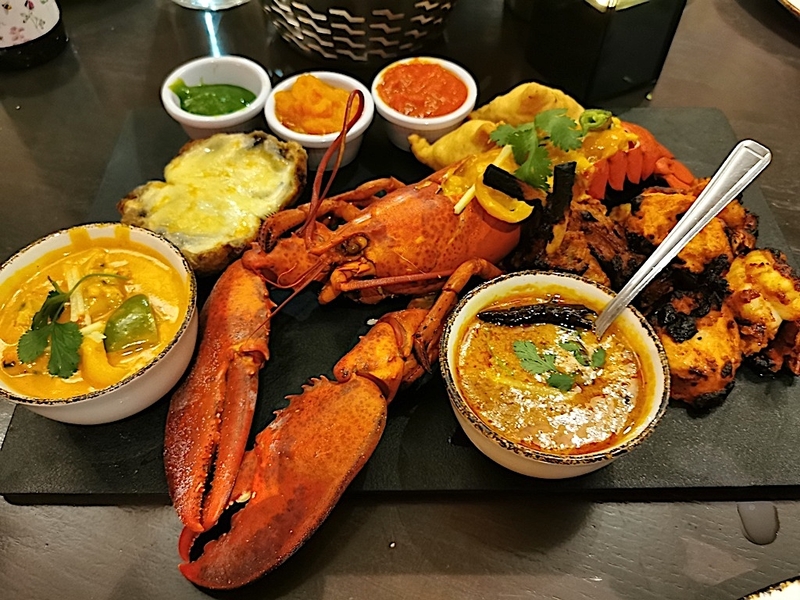 There’s a cool confidence to Ashas that I always admire. The service is slick and smooth, the decor in the nineteenth century former commercial building smart and comfortable. The whole place hints at colourful sophistication. The same could be said for this dish, which we shared between four. It’s a whole tandoori lobster in its shell with chilli garlic king prawns, lamp chops, a venison samosa, some mushroom kurkure and tandoori murg tikka. The flavours were immense and the timing precise. The flesh of lobster was particularly beguiling. All in all it was a vivid and delicious start to the meal. Jonathan Schofield 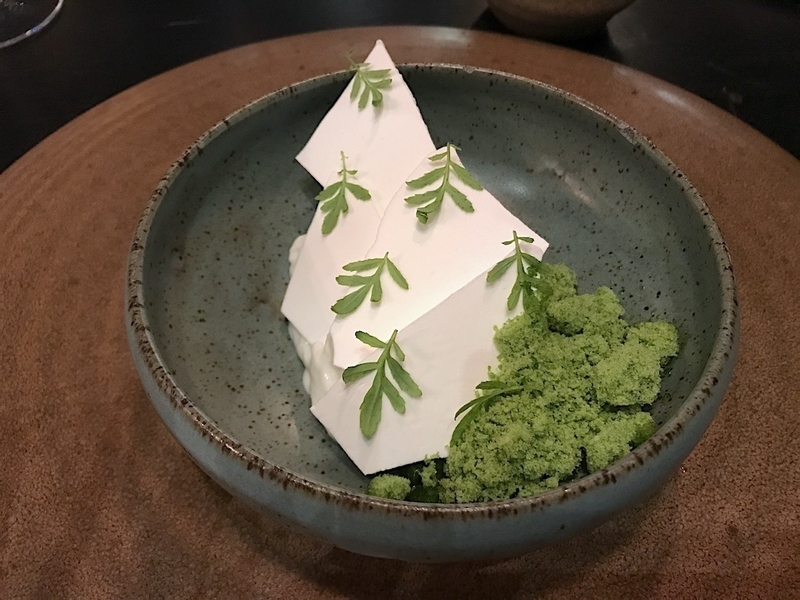 I was lucky to have bagged a table at the newly bespangled Mana this month. Another restaurant that focuses on meticulously sourced ingredients but whose approach is far more experimental and, well, a bit bonkers. The Mana experience is like being picked up by a Wizard of Oz-style tornado as dishes, descriptions and drinks whoosh in and out and before you know it you’re staggering back out into the cold night air bewildered. It’s a holistic affair so it’s not easy to extract one dish from the menu as a standout example but I loved this ‘dessert’. Slightly sweet, baked apples are nestled into sharp sheep’s milk yoghurt and topped with shards of what look like Perspex but turn out to be some kind of magical meringue. The whole lot is sprinkled with a mossy-looking sorrel granita. Its texture is so fine that it doesn’t seem like ice at all until it melts on your tongue in an instant, leaving a grassy zing that resets your tastebuds for the final course. Magic. Kelly Bishop