Lucy Tomlinson has a cheesy date round the back of Piccadilly

If you ever hang out round the back of Piccadilly, you might have noticed there is a new monolith in town. From the fleet of shiny black cars parked outside to the interlocking D logo, it’s all very international corporate villain’s headquarters chic. In fact, instead of housing some bad guy and his nefarious plans for world domination, it’s the Dakota Hotel, the new project from former Malmasion owner Ken McCollough. I visited to investigate the food element, but you can read about the rest of the hotel here.

The cheese trolley rocked up and stole our hearts

A good hotel bar should be romantic, sophisticated and ever so slightly furtive. The Dakota bar is all of these things; dripping in candlelight, it whispers in a silkily seductive voice, ‘assignation’. In fact, so discreet is it that I walked straight past my husband, who had gleefully got stuck into a cocktail while he was waiting for me to arrive. He could have been up to all sorts in the gloom so I should be glad he was only cavorting with ‘rhubarb rhubarb’ (£10) a fruity and surprisingly powerful little number. After drinks we were escorted to an equally moody dining room glowing in yet more candlelight.

The website calls eating at the Dakota 'an exceptional social dining experience'. I was worried that this phrase means I’ll be forced to talk to people I don’t know, the horror. Us Brits have managed to accept those long tables where everyone sits together, but only by fiercely imagining glass walls in between dining groups and never ever making eye contact with anyone we don’t know (and sometimes even with the people we do). A ‘social dining experience’ sounds like Sartre’s dinner party in hell. Luckily it seems to be just the usual waffle, as the only strangers we had to talk were the staff and they were consummate professionals and charming to boot.

As we waited we were given a complimentary ‘Venetian dip’, a slab of goats’ cheese grilled in tomato sauce, ready to be scooped up with slices with bread. Goats’ cheese makes me happy, so this was a good start. We were also served an amuse bouche of curry and cashew foam, which was much better than it sounds, apparently served in the shell of a scooped-out avocado. Always good to see sustainability in action.

The fritto misto (mixed seafood, deep fried in batter, £10) is meant to be paler than your regular fish and chip supper, but this was veering into ghostly territory. Never mind, the seafood itself was outstanding. The king scallops (£15) too were plump and perfectly cooked. The Chinese-style ribs they came with were overpowering though.

As for the mains, again the lamb loin (£25) was perfectly pink and obviously of good quality, but the accompanying curry sauce was a too powerful, while the gnocchi frankly tasted like paste. The lemon sole (£23) too had been cooked absolutely on the nose, heaped with samphire and brown shrimp but this time the flavours were a bit limp. Sole is meant to be delicate though so maybe I just wasn't in the mood. The man on the next table was enjoying the monkfish curry and it smelled divine, giving me a bad case of order envy.

The highlight was the final course. A peanut butter parfait (£7) concealed a surprise nugget of banana, while dots of strawberry sauce completed this fun, childhood-inspired flavour trio (complimented by a measles-inspired plating). While I was contemplating the vaccination crisis, the cheese trolley rocked up and stole our hearts.

Mr Cheese, as he is fondly remembered (sorry we didn’t catch your real name but I like to think is was John Cheese) gave us the full shpiel (he even asked ‘do you want the full shpiel?’ which was helpful, as sometimes you just want the edited highlights), with each cheese’s origin lovingly described.

John has been poached from Holbeck Ghyll, so his cheese selection was heavily influenced by Cumbria, which was just fine with us. From the Tovey, a raw goats’ milk cheese from Thornby Moor Dairy, or St James, an unpasteurised sheeps’ milk cheese that was both creamy and ever so slightly meaty and all the other goodies in between, it was a treat. It looked a tad messy on the plate (£16 for a selection of five cheeses), but that didn’t matter when it had been served with such élan.

So while I had a few foodie niggles with the menu, I couldn’t fault the setting or the staff. This will definitely make it on to my list for a romantic evening, even if the budget is more likely to stretch to a couple of delightful cocktails and a bar snack or two than a full-on blow-out in the restaurant.

If you had told me a few years ago that I would be heading round the back of Piccadilly Station for a date, I would have been wondering where my life went so wrong, but no doubt it's the next up-and-coming area to benefit from the NQ/Ancoats overspill. Dakota will surely play an important part in that revival. 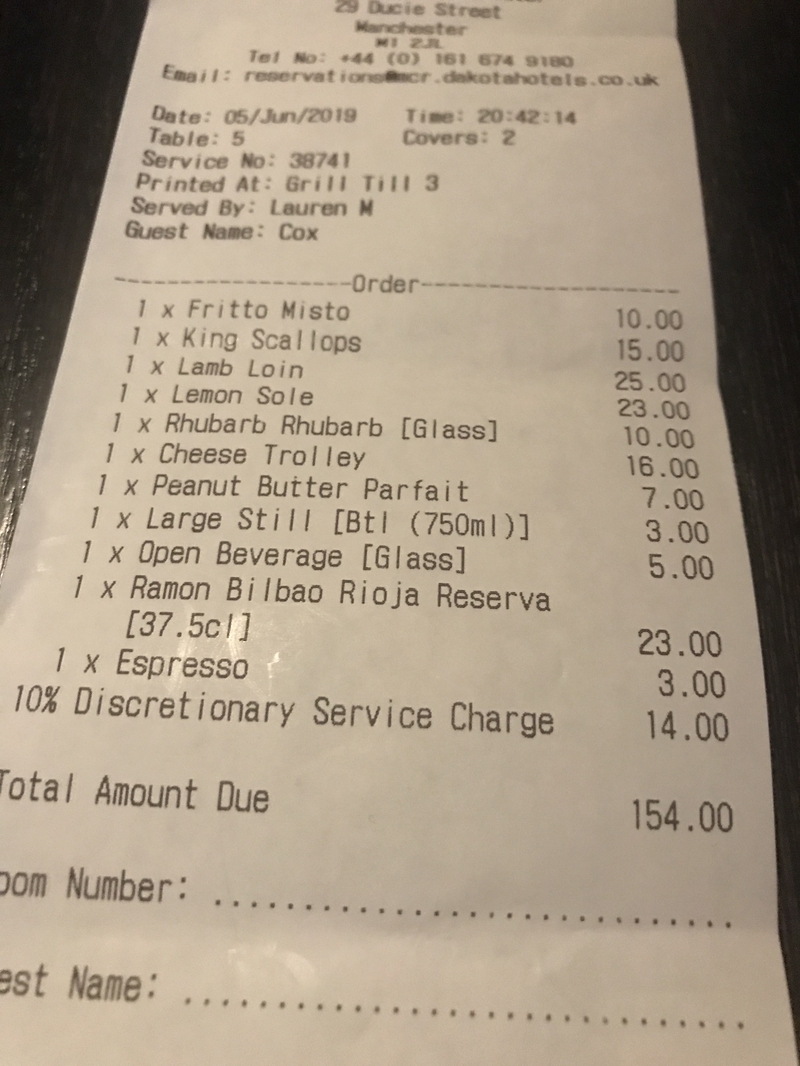