Cultureplex, Bistrotheque and Klatch coffee open in Manchester next week

Restaurant, bar, coffee shop, work space – 'it’s whatever you need it to be', say owners

A former Ducie Street goods warehouse behind Piccadilly train station has almost completed its transformation and (after a soft launch period) will officially re-open on 12th September as a new social and cultural destination for the city. The enormous space, will incorporate Bistrotheque restaurant, a communal lounge area, a central bar, Klatch coffee counter, flexible events spaces with outdoor terraces and a cinema. For those who watch the property scene, the back story is interesting too, as this was the first Capital & Centric scheme to complete in Manchester. They are behind the large Kampus development nearby, one of their several major north west developments.

Sounds interesting. Who’s behind it?

Pablo Flack and David Waddington, who founded London’s Bistrotheque restaurant in 2004 - back when Shoreditch was very different to the hipster hangout it is today. The pair are known for delivering unconventional, innovative and award winning projects. In 2013, after a series of successful pop ups, they went on to create Hoi Polloi for Ace Hotel Shoreditch.

Find your space, flop down and we’ll bring you what you need.

So more Londoners seeking to plant their flag up north?

Not this time. Pablo hails from Huddersfield and David was brought up in rural Settle, so are both northerners who were heavily influenced by Manchester’s legendary music and club scene as art students. They actually met in the 1990s at a service station – part of a secondary club scene as people travelled to and from venues from across the north – they got chatting and the rest is history.

Show us round then

Ducie Street Warehouse is enormous, so the huge space has been seamlessly divided into various areas to accommodate different requirements people might have throughout the day from solo workers to meetings and meet ups.

opens from 7am so pretty easy if you’re coming in from Piccadilly. There’ll be a flower shop in the entrance supplied by Tib Street’s Northern Flower. BLOK boutique fitness studio will be through the doors to the right and you can get your coffee fix at Klatch, the pale blue shiny counter on your left. It also serves grab and go healthy(ish) toasties, cakes, salads and juices by day, followed by natural wines and craft beer by night.

Cultureplex is a vast central all-day space to work, lounge and dine. It takes up the rest of the ground floor interior of the building and is filled with natural light from a glass covered atrium. Wood panelled walls and leather seating in muted tones of grey, tan and forest green give it the calm serenity of a (very cool) public library with the functionality of a public square. The space is divided by terracotta work stations made specially by Granby ceramics using recycled Manchester brick.

You’ll find a variety of seating from dining height tables with accessible power sockets, to low lounge chairs, depending on what you need when you’re there. “It’s not one thing,” explains Pablo who was showing us round, “it’s friendly and comfortable. Find your space, flop down and we’ll bring you what you need. We could have 100 people in here at any time, all using the space for completely different reasons, but still working together.”

The central bar serves as a room divider. It’ll serve craft beer, premium spirits, aperitifs, cocktails and liqueurs - bar manager Will Flower will be ready with your well-deserved negroni when that laptop shuts at 5.30pm.  Feel free to sit at the bar and treat yourself to a gin or vodka ‘Culturetini’ with Champagne vinegar and orange bitters, or an espresso martini made using local Ancoats Coffee. 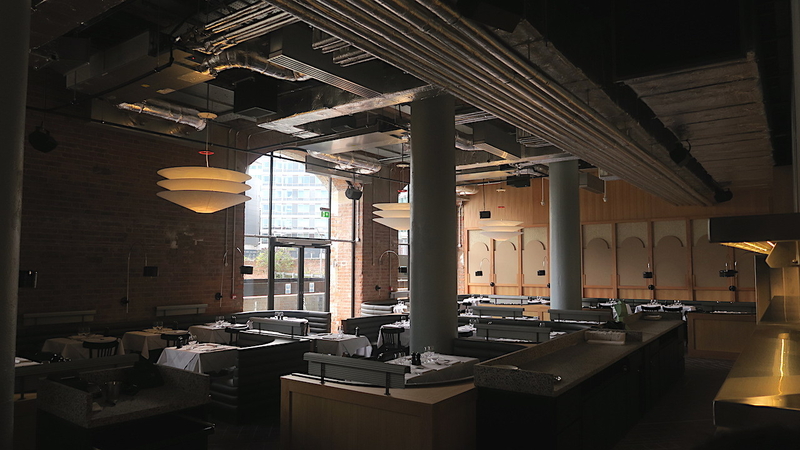 Along one side is a huge open kitchen, overseen (for the first few months at least) by Chef Director Blaine Duffy who has been manning the pans in Shoreditch for the past five years. As well as servicing the Bistrotheque restaurant with classic dishes such as chicken Kiev and Swaledale fillet steak with smoked bone marrow butter, the kitchen will also provide the bar snacks for guests in the whole ground floor and cater for any private events.

The 80-cover Bistrotheque takes up one corner at the back of the space. It is decked out in cool shades of grey and every table has its own generous banquette seating. Its ethos has always been to offer uncomplicated food, drink and service with common sense and good taste and the Manchester offshoot will be no different. The restaurant will be open for dinner seven days a week and a brunch offering at weekends.

Along the back of Cultureplex is a series of flexible-use spaces, each with their own terraced area decked out with plants – including a giant cactus so big it cracked a flagstone when someone put it down too quickly. (The outdoor terraces will be competed next year.) The indoor areas are available for private hire for dinners or smaller events such as community arts projects, classes, workshops, training sessions, tours and clubs.

Katie Popperwell, experienced Manchester-based creative producer, has been appointed Programme Director to oversee a quarterly themed programme of events and new commissions across film, performance, visual arts and craft. (They have even named a ‘Popperwell’ cocktail after her.)

The space also houses a highly specced, fully accessible 38-seater ‘Mini Cini’ cinema with reclining seats. The cinema will show a mixture of new releases and independent films. The programme will be announced in the ‘Whats On’ section of the website as well as the daily ‘newspaper’ menu provided in the lounge area.

CULTUREPLEX overlooks the Piccadilly Basin in a former goods warehouse, becoming the latest of the city’s heritage buildings to take on a new purpose.