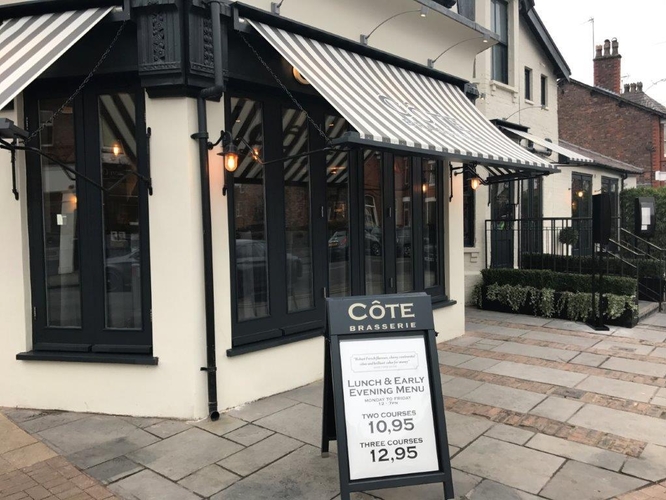 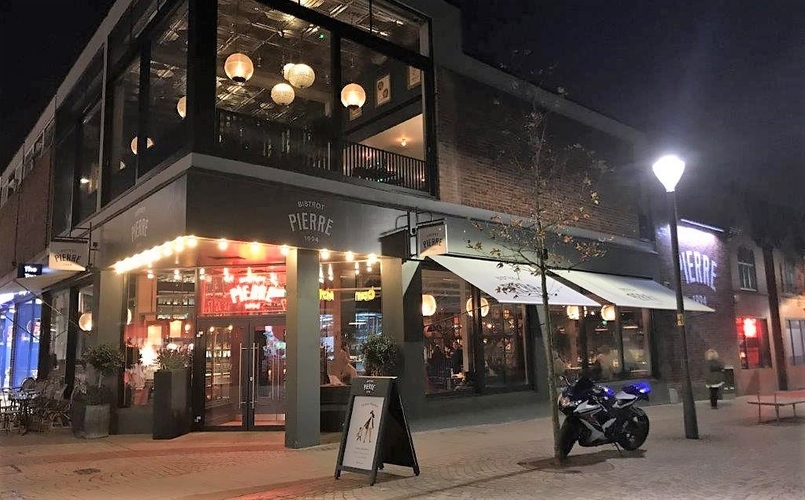 I had an idea... though Confidential shouldn’t encourage such things. They should just point me in the direction of a restaurant, fill my belly and ask me to produce words from one end or the other. This time, however, we went with my idea, which I’d based on an assumption that turned out to be baseless.

Two French chain restaurants had opened at similar times in Cheshire within a reasonable leafy distance from each other; Cote in Hale Village and Bistrot Pierre in Altrincham. My inner food snob, used to scoffing one way or another, thought they’d be so generic neither would warrant a full review. Surely there would only be a mere frite’s width of difference between them? So why not pit their pissaladièrs against one another in a battle of the bouillabaisse?

If the middle classes between Ashley and Alty really wanted to recreate a bit of Brittany in Britain, in which would they be better off spending their leftover euros (oh they don’t accept euros - at least I don’t think they do).

Cote Brasserie opened in Hale Village at the end of January, taking over the site formerly occupied by Hale Grill. It has been given a £1 million makeover to transform it into ‘a chic Parisian-style brasserie.’ This has been done with a sensitive touch. The interior is traditional with brown leather seating, dark wooden tables and cream coloured walls on which hang mainly mirrors. Nothing that shouts ‘Viva La France’. It was busy for early evening with quite a few families taking advantage of the monthly-changing, early evening, 3 courses for £12.95 menu.

Altrincham’s Bistro Pierre exudes a more overtly French-style with Gallic posters, pictures and prints on every vertical surface. The atmosphere is more casual and the clientele more mixed. They also offer a popular prix fixe menu of 3 courses for £12.95. This huge two-floor restaurant has been steadily busy since it opened in December 2016. With space for 170 diners, it’s slightly bigger than Cote which seats 130.

A quick look online blasted my assumption that both venues would be trotting out generic French classics that anyone could recite with their eyes closed. Despite both menus being along the same lines, there are only a handful of similar dishes and I’m not sure a chain restaurant could call itself French without those. The only starter dishes by which to do a direct comparison were calamari and chicken liver pate.

It’s a similar story for mains - although both companies have their own take on fish pie, lamb, duck leg and things served with puy lentils - the menus are as different as Eric Cantona and Marcel Marceau. In the end, we ended up with only beef Bourguignon and fish stew to compare.

Bread is complimentary at Bistrot Pierre, but it’s little more than mass produced baguettery. At Cote, however, the freshly baked sourdough baguette with Normandy butter - though £2.40 a basket – c’est super.

Cote (£6.25) - not a huge portion, but that’s just as well with this notoriously rich starter. Served in a Kilner jar with two decent sized slices of toasted brioche and spiced apple chutney which, if it wasn’t homemade, made a decent attempt at appearing so. 7/10

Bistrot Pierre (£5.95) - served in a generous slab and as smooth as Cassanova tuning into Sunday Morning Love Songs. As is often the case with paté, there wasn’t enough proportionate bread, but as it’s free here it’s an easy problem to solve. The red onion confiture had come out of a giant catering jar, but was fine. 7.5/10

Bistrot Pierre or ‘Fritôts de calamars’ (£5.95) You get a little more for your euro here. Battered and fried rather than baked, served with roasted garlic mayonnaise. Not much to separate the two. 7/10

Cote (£14.95) It’s not easy to make a bowl of brown look photo friendly but Cote gives it a try thanks to the traditional garnish of a heart shaped fried bread crouton. In amongst the cubes of tender slow cooked meat were chunky lardons, plenty of mushrooms and lots of tiny onions that some poor bugger had to peel. 7/10

Bistrot Pierre (£13.95) Not as pretty this one, definitely more rustique and homely with larger hunks of softy stewed meat, lardons, mushrooms and shallots. Vegetables were served separately including chunky roasted roots and a pan of boulanger potatoes so delicious and buttery they caught me in a Golum moment where I would have turned on anyone who tried to take them from me. 8/10

Cote (£13.95) ‘Breton fish stew’ comes with a bit of fanfare as the metal cloche is removed at the table to reveal a fish dish packed with mussels, clams, prawns, squid and some poached sea bream. It’s quite a polite version, padded out with potatoes. 7/10

Bistrot Pierre (£15.95) I enjoyed their take on this classic Marseille fish stew so much that I included it in this month’s ‘best dishes to try’. Two huge king prawns required some satisfyingly hands-on surgery and were more than worth the effort. They were joined by a generous handful of mussels, chunks of smoked haddock and a beautifully charred fillet of sea bream. 8/10

Result: Yes, they’re both chain restaurants serving French dishes, but there’s enough to separate them. If I remove my head out of my derriere for un moment, it’s easy to see what’s good about a well-run mid-level chain restaurant. They’re dependable, good value and have a well rehearsed level of service that allows visits to run smoothly from Stratford to Swansea. Hand on heart, we enjoyed both visits, and neither is likely to ever let you down. But looking at the scores, Bistrot Pierre was ahead by a tiny frog’s leg.