'Much more appetising than a mankini ' - Cibus, Levenshulme, reviewed

I suspect gondoliers don’t kick the arse out of lunch. After a hard morning’s punting around the Rialto they’re happy to pop into a backstreet bàcari for a couple of cicchetti – snacks of fritto misto, polpetto, sarde in saor, cuttlefish risotto maybe? Then it’s back to living the Cornetto dream.

There’s a real back story to those savoury doughnuts and their regional variations. I think we got an all-encompassing version for our £5.25

Cibus is not like that, though authentic cicchetti are definitely a major selling point. The former M19 club, once scuffed karaoke central in downtown Levenshulme, is unsurprisingly not big on marble. The proud Venetian who has converted it into a restaurant is giving Aperol short shrift in favour of his native city’s bitterer proposition, Select.

Not that Giorgio Fontana is parochial. At the end of the meal, we also get a taste of Emilia Romagna as he plies us with Nocino, a liqueur made from unripe walnuts and definitely on the amaro side. Not that we were expecting a cheeky limoncello after the grown-up Italian meal we’d just wolfed.

There were always surprises in Cibus’ previous incarnation as a pop-up above Fred’s Ale House two doors away. Take jerk chicken, both as a main and a pizza topping.

Well, there’s no place for it on the new menu, which is purist Italian regional with a leaning towards the Veneto and Sicily, birthplace of his head chef and partner, Marco Bracchitta.

We kick off with a brace of "Stuzzichini", the Mezzogiorno name for antipasti – much more appetising than a mankini but with a similar focus on bulge. If the cicchetti "small plates" to come are more "racion" than "tapa" size our zucchini fritti and salted doughnuts redefine what nibbles should be. They certainly contribute to our passing on pizza, speciality of both Giorgio and Marco, who met while working at Salvi’s.

Cibus (pronounced CHEE-bus) means food in Latin - and here not just any old raw materials, as I gauged from my colleague Kelly Bishop’s interview with Giorgio ahead of Cibus Pizza’s reinvention as Cibus Ristorante.

There’s a real back story to those savoury doughnuts and their regional variations. I think we got an all-encompassing version for our £5.25, with pesto mayo, marinara sauce and crispy onion giving a crazy zest to what are essentially dough balls. You can see why they are popular on the Naples street food scene.

The beautifully crisp deep-fried zucchini with parmesan (£4.50) were more restrained, perfect with a Sardinian Cannonau red (£32), one of the best expressions of the grape that elsewhere goes by the name of Grenache. Later, off a small but interesting wine list, we had a glass of Roero Arneis, the white you sip In Piedmont when you seek escape from tannic reds. Arneis means rascal because it is hard to grow. This floral example, all ripe peach and almond on the palate, was made to accompany the most delicate dish we tried – Orata all’acqua pazza (£10). Sea bream fillet, cherry tomatoes and spuds in white wine reduction. Rewarding in its simplicity.

It wasn’t as memorable, though, as another fish dish that dispelled my dreaded salt cod flashbacks. These date back to a tasting menu in Naples at a restaurant that was a homage to the stuff – so five courses all based on soaked and reconstituted salt cod (including a pudding). Molto orribile.

Not so this Baccala alla Vicentino (£10), a soothing stew of salt cod, with white onions, milk, a pillow of parmesan polenta, given a necessary jolt by a thicket of spiced al dente green beans. Just loved it, but it did prompt me to contact its creator the next day to query whether it contained the classic Venetian stoccafisso (the stockfish of medieval and Tudor England), confusingly also known as baccala. That differs from salt cod proper because it is not salted and dried but simply dried, so the moisture content is down to 15 per cent and it’s stiff as a board. Hence the need to soak for three to four days with repeated changes of water.

A chastened Giorgio’s reply: “I’ve searched high and low with Smithfield fishmongers. They say there is so little demand and it’s so expensive. A shame. It would make it even more interesting in terms of texture.”

Cime di rapa (rabe or turnip tops, the heads of young rape before flowering) are also not on your average Italian restaurant’s hit list. Here this nutritious green is given the classic Puglian treatment I first encountered at Jacob Kenedy’s Bocca di Lupo in Soho. Orecchiette (£10) – the "little ears" pasta because of their shape – are served with boiled cime, dressed with garlic and chilli flakes plus, Cibus’ genius touch, diced fennel sausage.

Next up, the original Piedmontese surf and turf, flavouring a creamy mayo with tuna to dress cold sliced veal that has been simmered in various aromatics. Capers and pickles give a welcome tang to this exquisite Vitello tonnato (£9).

Guancette (£12) turns out to be ox cheeks braised in red wine and served with mashed potato and crispy parsnip shards. Hearty and substantial, it’s a final reminder not to over-order at Cibus. Still, when food is this consistently interesting, the antithesis of most trad Italian suburban restaurants, it’s hard to resist. A glowing gem – even minus all that marble. 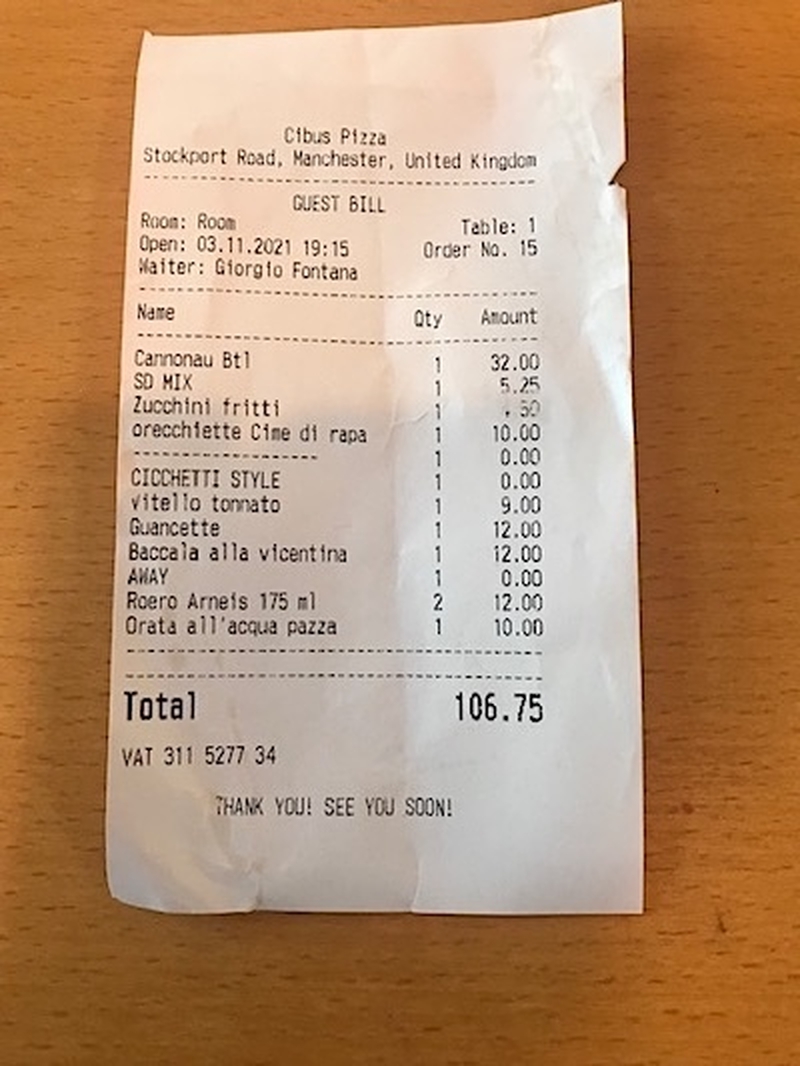