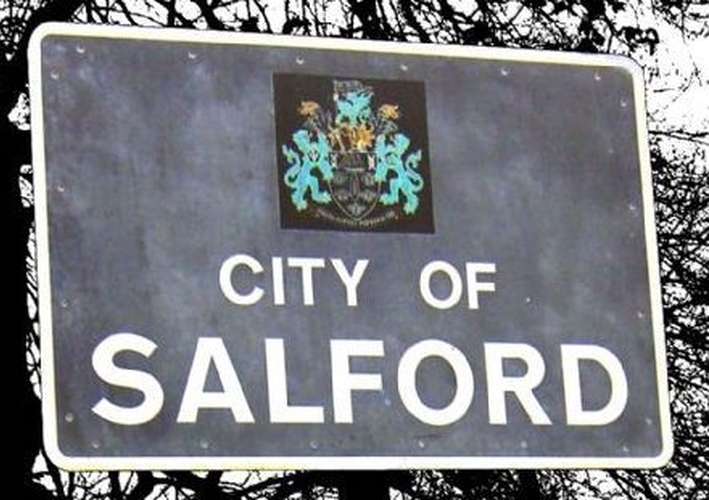 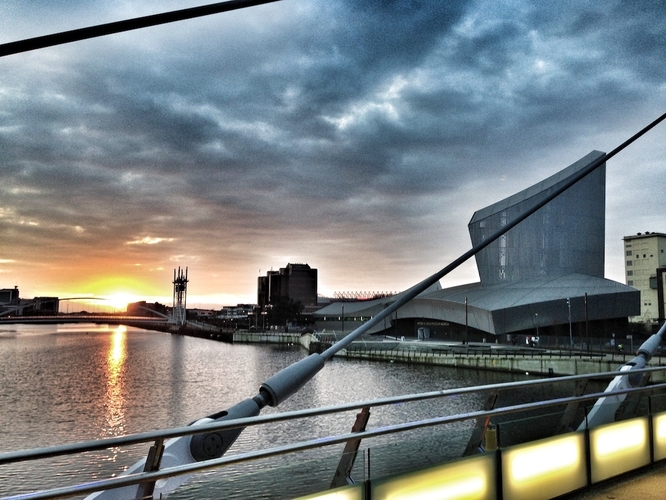 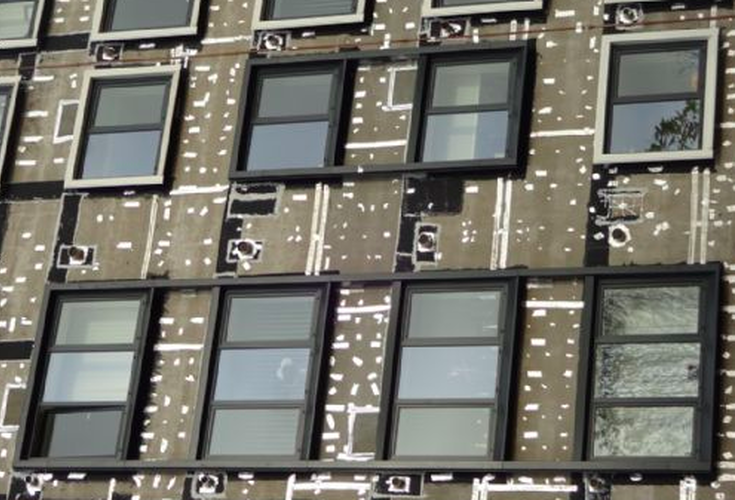 Danny Moran on developments west of the river, and the growing sense that people are beginning to organise

Anyone popping down to Salford Precinct for a bit of Christmas shopping in 2018 may have been forgiven a double take at one of the window displays. The Salford Star’s ‘Toilet of Broken Promises’ - a guerilla ‘art installation’ comprising an avocado 1970s latrine overflowing with council regeneration documents - formed the centrepiece to the community web zine’s HQ during its recent campaign to defy the wolf at the door.

Funny place for a toilet, you might have thought…though that shopping district, some would argue, offers ample opportunity for local government to wash its hands.

“Could the Yellow Vests protests happen here? Make no mistake, there have been meetings”

The Star, of course, is well known for its relentless exposes of municipal malfeasance. In fact, the twelve trenchant years of its existence have at times appeared to resemble a protracted journalistic bunny-boiling on the part of a dissident media cell sworn to the notion that its local authority could never do any right - and this with respect to a council sometimes held up as a socialist paragon in contrast to Manchester’s neoliberal cabal.

In the eyes of editor Stephen Kingston, Mayor Paul Dennett heads up a toxically cynical junta which has waged war on the working class, not least in terms of the communities evicted in waves in order to make way for the plans of luxury apartment developers.

Whatever your views on the issue, the ‘social cleansing’ narrative is much stronger in Salford than it is here, and Kingston’s zine has been at the forefront of framing the issue.

It was salutary, then, to see the Save The Star campaign up close, as the shop unit loaned for free by Salford Shopping Centre was made over into an ad hoc situation room. “FLOODS!” “RIOTS!” “PROTEST!” screamed the slogans spray-gunned on the walls, amidst a photomontage of stills from the urban front line. Angry youths, burning cars, crumbling streets…the punk aesthetic was sufficiently sharp that any passing millennials may have been lightning-struck with inspiration for a pop-up revolution-themed cake shop.

In the absence of any hipsters or hipster-cakes, however, what transpired was one of those deceptively touching events, where community is strength, and the collective will to enter into the spirit is the meaning. That sense of blind fury to be found in the Star…well, there’s a lot of people feeling that disconnection, that need for representation in the press.

As Coronation Street star Nigel Pivarro auctioned celebrity curios and relics from a disappearing city, and the bids came thick and fast as the quips from the floor ("what do I hear for this brick from Ringo Starr’s house ….fifty pounds…sixty pounds….seventy?”) you could look about you at the assembled wheelchairs, mobility scooters, activists, cameras, dogs and brews from thermos flasks and see the swelling constituency for whom the mainstream media line means absolutely nothing. It seems to grow more and more with every passing month.

Outside, in what was once Hanky Park, in this city without a centre, the sense of cheer was as thin as the boughs on the Eccles Christmas tree. But that’s retail for you.

Indoors, it was hard not to recall that Shaun Ryder comment about Salfordians being the Scousers of Manchester. The romance of the docks, the kitchen-sink culture, the homespun heart, it can seem to go a bit deeper than Mancunian dry diffidence.

“This wasn’t just about raising money, it was about making a statement,” said Kingston of the Star’s ten-day residency. “And we didn’t get a single negative comment from the public - apart from a complaint from Salford council about the toilet. The people supporting us weren’t newcomers from Chapel Street and Greengate, they were ordinary people. In the end we raised more money than we needed.”

The apartments are freezing. Birds and mice make their homes in the open vents.

Shake down a place like Salford in the pages of a muckraking mag and there are storylines to be found playing out like an ideas list for an aspiring Ken Loach. Recent years have shown us the subtle differences between the 2011 riots as they took place in this very shopping centre (where loan shops were razed) and in Manchester city centre (where trainers were looted). They’ve given us the north-south divide writ large in terms of the flood relief granted after Broughton was submerged in the dying days of 2015. Then there’s been the rush hour kick-in-the-teeth at Media City as Londoners began to commute to well-paid jobs through the heart of the dirty old town.

There’ve been the graveside shenanigans at Paul Massey’s funeral and the conflicted sentiments felt locally about the demise of the one-time strong man. The machinations of Peel Holdings and their attempts to sway local democracy when congestion charges threatened their cash flows. The brutality of the anti-fracking clampdown at Barton Moss, the loss of the shipping cranes, the colliery, the gasometers, and all the other landmarks associated with Salford’s industrial heritage. The Class of 92 take-over at Salford City football club and their use of its community as extras in their public relations films. The much-vaunted return of the docks and the shipping which will supposedly return to the inland route.

Right now it’s the cladding scandal, and the nine shivering tower blocks huddled a stone’s-throw away from the precinct. All have had flammable skins ripped from lower floors in the wake of the Grenfell tragedy – in the case of Plane Court the whole building has been stripped – without a word to residents as to when it will be replaced.

So now the wind whistles wheezily through the holes left exposed by the unfinished work. The apartments are freezing. Birds and mice make their homes in the open vents. The council have promised fuel relief – bills are set to go through the roof, but nothing has been fixed and people are terrified to turn up their heating to alleviate the Arctic conditions.

Troublemakers, meanwhile, are served with tenancy warnings, or so it seems. It’s precarious, now, to stick your head above the parapet and speak up against the powers that be.

“I was accused of ‘raising my voice’ in a meeting,” says Graeme Langton, who was suspended as chairman of the residents’ association at Malus Court. “Then we held a vote which supposedly was ‘illegitimate’ and they served me with this tenancy warning. Now all the other tenants associations are afraid to speak out. No one is standing up for the rights of the people who live here.”

...it’s strange because what will be built in its place probably won’t be as good. The flats will be smaller. The spec will be much more cheap

The unspoken message of austerity seems to be that inequality is somebody else’s problem. Your mind goes constantly back to that UN report: the shredding of the social contract; the notion that if you have no money, now, then the state no longer feels an obligation to look out for you.

You’re on your own now. You’re an undesirable. You’re the enemy.

At a nearby block, some time back, a tenant looked out across the rooftops, across the regeneration battleground, out into the direction of Manchester. “This old 1970s tower block will probably go too, before too long,” he speculated. “And it’s strange because what will be built in its place probably won’t be as good. The flats will be smaller. The spec will be much more cheap. The whole thing will probably be more temporary.

“It all started in the Twenties and Thirties, don’t you think? After the General Strike, the Jarrow March…demolitions, slum clearances. It’s like they break up communities on purpose so people can’t organise.”

As we stare down the barrel of 2019, however, and all that may lie in store, there’s the growing sense that people are beginning to do just that. Who knows where the Brexit debacle will take us? Or if the strains of austerity will cause society to buckle? It’s just a few weeks since the environmentalists brought Deansgate to a halt in the midst of a Saturday shopping day - the new Extinction Rebellion movement bringing vigour and scale to the direct action route.

What will happen if the Peoples’ Vote breaks cover, re-sets the clock, takes us back to square one after two years of Brexit mayhem? Will a new vote plunge the nation into deeper crisis?

The Yellow Vest protests? Could they happen here? Make no mistake, there have been meetings. The right wing wrestles with the left for the rights to the franchise. The country has never seemed so divided. There’s never been so much anger and despair. With all this deadlock…eventually, something’s got to give.