Back To Stories
● / beer

Winter’s coming. That’s not a Game of Thrones reference, that’s just a fact. Winter is coming and although we’d implore you to park up in your local boozer and drink out to help out, there’s also going to come a time when you’ll want a little bottle or can of something something at home. Blink and it’ll be summer. Then you’ll be needing nice cans for drinking in parks whilst soaking up the sun. Life comes at you fast.

Luckily Manchester is blessed with a geographically diverse selection of bottle shops for all your craft needs. Whilst many stock similar beers, they’re all unique. Some will specialise in parts of the world, others will concentrate on local selections. All have someone knowledgeable at the helm who’s more than happy to talk you through potential choices and give helpful recommendations.

Whether you’re after one of those moreish German lagers or your stout and about on the hunt for a big wintery porter, here’s our pick of the Manchester bottle shops worth dropping by.

We’ve got a soft spot for Batch in Altrincham. In collaboration with Libero they’ve made King’s Court into a lovely spot to sit and sip. The Batch setup is also a bit like a library of beer, with an end-to-end selection of bottles and cans on one side, with fridges on the other side for the same beers in chilled form. They’ve also got a frankly mad device on the bar which chills a can in about a minute. It’s like a little bathing chamber that spins the can. It’s remarkable. That aside, Batch’s selection covers near and far. Last time we were in we had The Kernel and Sure Shot.

A city centre institution with a namesake bar near Spring Gardens, Beermoth has long been a supplier of the best cans and bottles in the city. One of the better places for alcohol-free too if that’s your bag. Lots of cool beer stuff always going on including tastings and special beer bundles. Last time we checked they had Balance Brewing’s Bramble wild ale in (strictly one per customer) as well as good bottles from Sheffield’s Beer of Mod and Estonian brewer Põhjala.

A relaunch of previous dinky beer bar Bier Cell, Bier Zot is the same compact space selling bottles from Belgium and Germany’s finest. That means the likes of such as Augustiner Helles-Brau, Augustiner Edelstoff, Kwak and Kölsch, all in bottles, all able to be taken away or open and supped on site down a handsome alley just off the main market drag in Altrincham. Owner Owen is great to chat to and knows his beers. He’s stocking Timperley-based Libatory Brewing who do a cracking Green Tea Pale Ale.

Choose from cans. Choose from bottles. Choose from drinking in or taking away. Choose a seat inside the bar bit or next to that massive window with the panoramic views. At The Bottle Mill at Houldsworth Mill in Reddish, there’s a choice of fresh cask beers as well as a fridge full of cool ones from near and afar. Locals like Marble, Pomona Island and Thirst Class. Been for a mooch around for a look at the second-floor makers and feeling parched but don’t fancy a beer? Worry not. There’s cider, fizz and cocktails too. Lots of great events to keep an eye out for too.

A delightful little bottle shop, The Bottle Stop deals in the rarer and more difficult to find bottles as well as an impressive selection of wine, spirits and local beers. It’s the sort of place you’re likely to get a hard-to-find Oktoberfest beer (Augustiner Brau) or find a brewery doing a rum barrel-aged imperial scotch ale (Central Waters) that you might not have heard of before. Well worth dropping into and just having a big old chat about what you like and staff will recommend your next favourite thing to drink.

Few beer shops are as wholesome as Bridge Beers in Stalybridge. The little micropub and bottle shop on the Stalybridge high street is a cosy, almost Cheers-esque hive of welcoming hospitality and great cask beer. Kitted out in local brewing paraphernalia, opposite the bar is a shelf full of the brewery’s beers as well as guest beers. Drop in for a pint and take some bottles of Mumbai India pale ale home.

If ever you needed tangible proof of god’s work, Chorlton wine and beer shop Carringtons’ proximity to so many great BYOB restaurants, is it. All that fantastic booze. All that excellent food to soak it all up. The vibe is special at Carringtons too. The interiors bring to mind a sort of spaghetti western general store, whilst the compact grid of boxes and shelving makes it feel like you’re crate digging for goodies. Carringtons was stocking the likes of Ayinger, Schneider Weisse and the now commonplace Schofferhofer long before they became commonplace in Manchester. Always good for trying new beers from long and far, they’ve usually got a solid bottle selection from Saltaire too, which is always welcome.

Urmston’s Craft Brewtique on Flixton Road knows its way around a can. The bottle and can shop has a solid selection of local beers from the likes of Balance, Pomona and Cloudwater with breweries from further afield like Overtone, Brew York and Beak. There’s also something extremely satisfying about Craft Brewtique’s curated social media. Always worth keeping an eye on for canspiration.

Now with four sites across Manchester (Heaton Moor, West Didsbury, Chorlton and Ancoats) The Epicurean has built a dependable craft empire in recent years. The Ancoats store, basically a room where the walls are long fridges full of amazing beer, is perfectly placed for cans in Cutting Room Square on a sunny day. Take your pick when it comes to beers, with The Epicurean also stocking a big range of non-alcoholic as well as ciders. A month dedicated to New Zealand craft beers gives you an indication of how niche the shops are willing to go. Treat yourself to a bottle Cassels and keep an eye out for collaborative beers, especially around Christmas time.

The bar and bottle shop outpost of small, South Cumbrian brewery Fell is a welcome addition to Chorlton. There’s room for sitting in and out, natural wine by the bottle and plenty of Fell’s own beer and guests on tap. There’s also plenty to take away if you’re in the market for cans on the road. Those mesmerising cans of Idaho 7 Simcoe pale ale are worth stocking up on but there’s also a decent selection of guest cans.

A great little award-winning (also nominated at this year's MFDF awards) beer shop and taphouse in Stockport, Heaton Hops sells a range of beers, ciders and gins. Passionate about great beer, the shop has an eclectic selection of IPAs, pale ales, stouts and sours from the UK’s most exciting breweries as well as beers worth copping from Europe and America. They’ll also more than happily fill up a growler from one of the eight keg lines on the tap wall. Damian and Charlotte who run it are great and are more than happy to recommend new things to try.

Part of Sale’s impressive shopping centre renovation, Hops & Boogie is a bottle shop and taproom. Over 130 bottles and cans await, as well as beers on draught, real cider, wines, local spirits, cocktails as well as vinyl and art. Lots of fridge space too for taking away chilly ones. Regular meet the maker nights mean you can have a beer and some snacks with brewers as they talk you through their beers. Open until 11pm. Lots of fun.

Everyone always looks like they’re always having so much fun at Joule on Chapel Street. In the short time since the bar and bottle shop has been open, the place has managed to create a real community feel. With extra high-strength beer shenanigans to boot. The staff are more than happy to talk through selections and it’s a comfy spot to watch the world go by. Great German lagers in the fridge including Tegernseer Helles and Augustiner Helles.

It’s not a competition but it’s notable that Keg, Cask & Bottle in Prestwich has a curated selection of over 300 beers from the UK and around the world. Said beers are available to take home or try at the shop’s dedicated tasting room for a small corkage fee. Part shop, part bar, KCB also has a rotating selection of keg and cask beers that you can drink there with growler refills also available. Lakes Brew Co, Pictish Brewing Company, Sureshot and Elusive are notable names in stock and there’s also a regular serving of meet the brewer events. We know it’s early, but they also do an advent calendar.

Don’t underestimate Stalybridge. As well as Bridge Beers, which caters to a more traditional drinker, down the road you’ve got Ol’s which is bringing the region’s best craft beer to a charming little spot on Market Street. Beers in bottle and can form have been curated from the regional to the international, with the shop also selling international wines and ciders. Well worth keeping an eye on the shop’s social media too as Shaun and co regularly put on spirits festivals. Great for copping cans of Sure Shot and they've recently opened up the back room as a bar.

You might know The Old Cobblers from passing it on Kinders Lane in Greenfield and thinking, wow, what a quaint little shop. You might also know The Old Cobblers because, like us, you’ve scrolled the shop’s Instagram and had a little giggle at the bloke who works there doing funny videos. Vids aside, the selection is great. Great wines (surely everyone drinks Chin Chin in Greenfield now?), great beers and lots of splendid artisan products like pies, cheese, breads and at one point those little doorstops that look like popstars. Stop by for a coffee and stock up on goodies.

Revel in a wide choice of local and international craft beers in Romiley. Fill your growler with a choice of six lines or sit in for a glass of the good stuff. Stock up on cans. So many cans. Track, Cloudwater, New Zealand’s Cassels, Buxton’s Buxton and the not so Elusive Brewing are all represented on the shelves. Mini kegs and multi-can gift boxes too. Get the beer lover in your life something special.

Read next: 10 non-scary things to do in Manchester this half term

What you say
Previous Article Next Article
Read Next
● / Drink

Cheap eats and daily discounts throughout the month of November 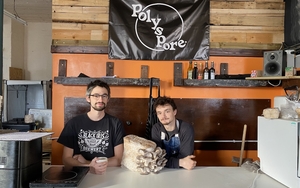 From supplying restaurants to exploring new materials, the future is shroomy