It's been another week of ups and downs, openings and closings and making sure we all keep to the rule of six (as far as we can make out what that is) to avoid another full lockdown.

Many of our fantastic restaurants and bars have been going out of their way to look after us and we've all been doing our best to eat out to help out despite the end of the Government's August scheme. (You can still take advantage of some fantastic September restaurant deals here.)

This week we've told you about the city centre's upcoming sustainable market, the sad news about Juan Mata's dad's Deansgate restaurant and we've recommended a few fantastic places for solo counter top dining, but there's still so much to tell and so little time.

So we've put together a handy round up of hot food and drink news and upcoming events that you are not going to want to miss... 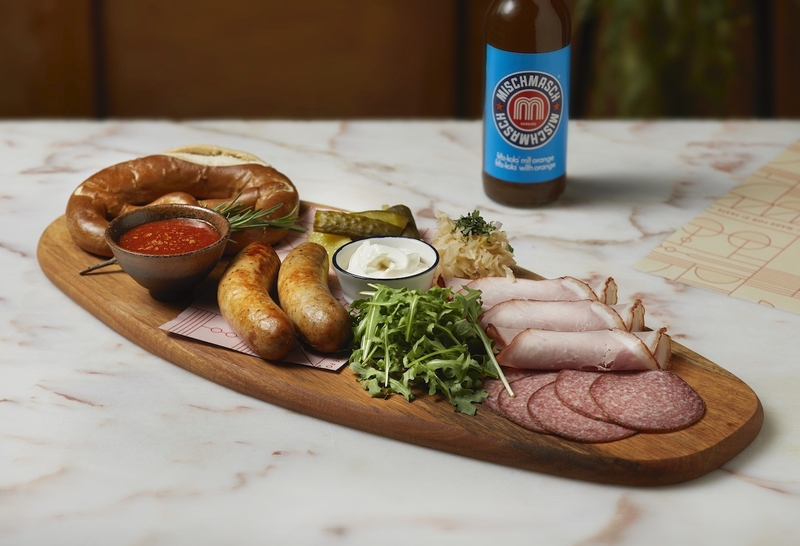 Germany has cancelled Oktoberfest and the fate of Manchester’s Xmas markets hangs in the balance. But fear not, those good folks over at Döner House, The Corn Exchange’s Berlin-inspired kebab house, are bringing in the bratwurst and Bavarian beer by the stein to host their own version of the folk festival. From 21st September to 4th October 2020, Döner Haus will have six Oktoberfest guest beers and a special menu including a platter of Bavarian meats, two paprika wurst and a pretzel served with cream cheese, rocket, pickles, sauerkraut and homemade curry ketchup and their version of the classic Currywurst with sausages driven in especially from the Volkswagen Wolfsburg factory. Reserve your table here. 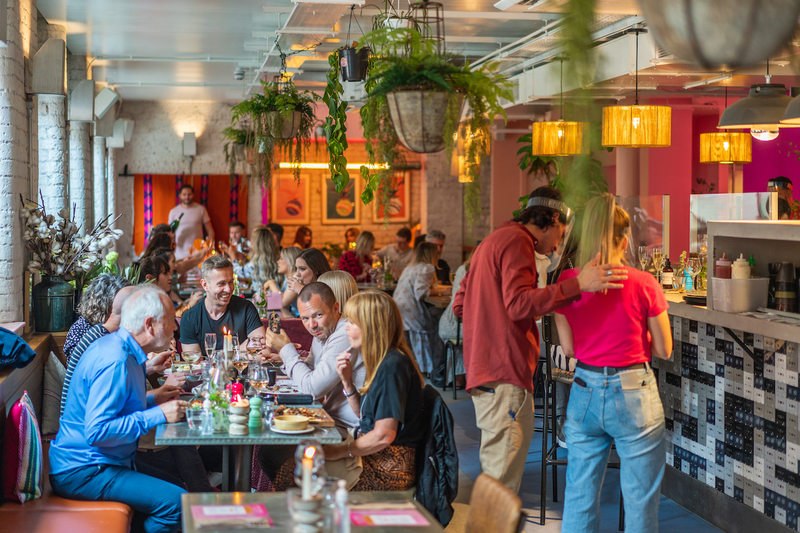 Peru Perdu’s drag queen brunch is back in action after a successful relaunch back in August. The pinkest brunch in town, sponsored by Veuve Clicquot will return on Saturday 26th September. Hosted by local drag queens, DJ Hattie Pearson of Hits Radio and Girls On Film fame will be spinning the funk and soul tunes. While enjoying the entertainment, you can tuck into a two-course Peruvian inspired brunch and and a glass of champers for £35. Peru Perdu’s signature Pisco Sours and bottles of Pornstar Martini or Bloody Mary are also available to order if you like a bit of the hard stuff before midday. Book a table here or call 0161 549 0005 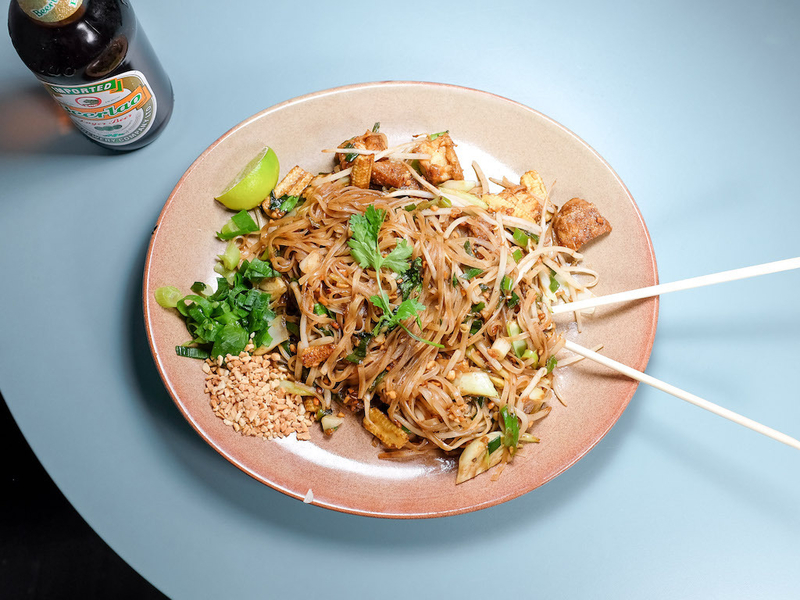 Everyone’s favourite casual pan Asian diner Tampopo is the restaurant po-po-popping up at Community Kitchen On The Square this weekend and prices are up to 40% cheaper than in their other sites. The alfresco restaurant in front of the Great Northern Warehouse has been doing its bit for local businesses all summer by offering them an outdoor space to pop up for a weekend. Previous pop ups have included Evuna, South Manny Flavours and Platzki. But this one’s all about the Asian flavours at bargain prices with Tampopo’s sticky chicken wings, curries and noodles at prices in the range of £4-7. Estrella beer is - of course - available on draft along with other drinks. 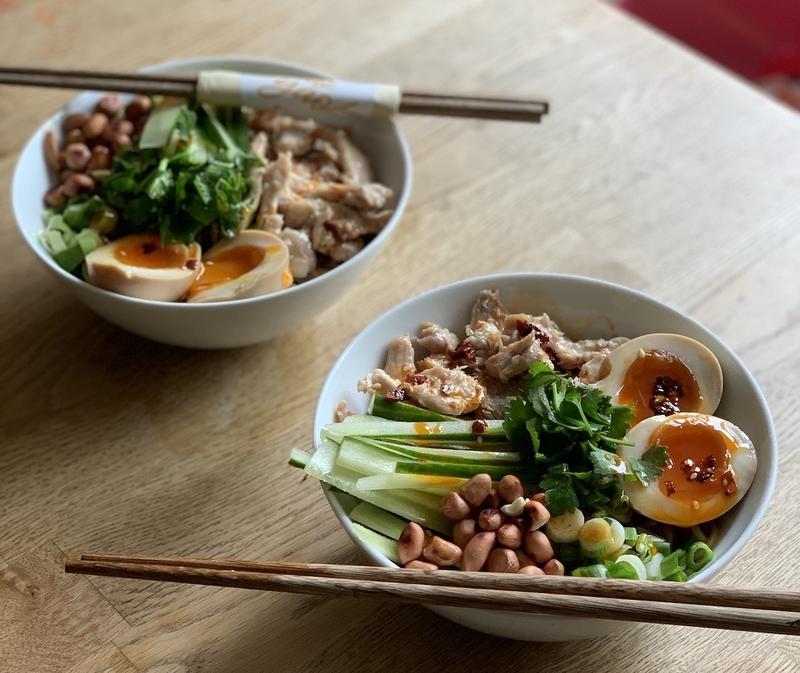 Sake fans, or those curious to try more of it, should head to The Sparrows on September 28th for a special evening in honour of World Sake Day 2020. From 7pm, diners will enjoy a special menu that the restaurant is currently keeping its beak shut about for now. Rumour has it that the four courses will include a dish from ex-Umezushi exec chef turned noodle nerd at YaoYao noodles, Omar. The sake on show will come from The Sparrows’ own specialist shop Ukiyo Republic. If you can’t make this event, you can always stock up on their sake online. 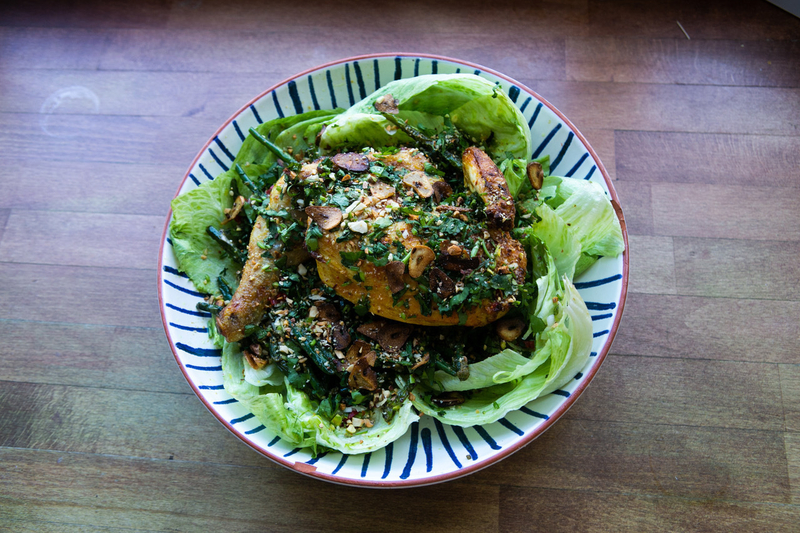 The owner of Didsbury cafe A Taste of Honey, Penny Lynch, has been making sure her recipes are the greenest in town by adding CBD oil to even more of her menu items. CBD is known for its unique nutritional properties and is said to aid relaxation and relieve pain, nausea and anxiety. Not just green in colour, it’s green environmentally too as hemp is carbon negative. While CBD is available in drops and capsules from your local health food store, it can also be used in recipes. New CBD-infused dishes at A Taste Of Honey include hemp seed salads, hemp flour flat breads with fresh tomatoes and a ‘lemon haze’ chicken. There’s sweet stuff too, such as a pineapple express upside-down cake. Penny has been one of the chef superstars of the Eat Well Mcr collective, cooking up nutritious dishes for those in need of them across Greater Manchester. 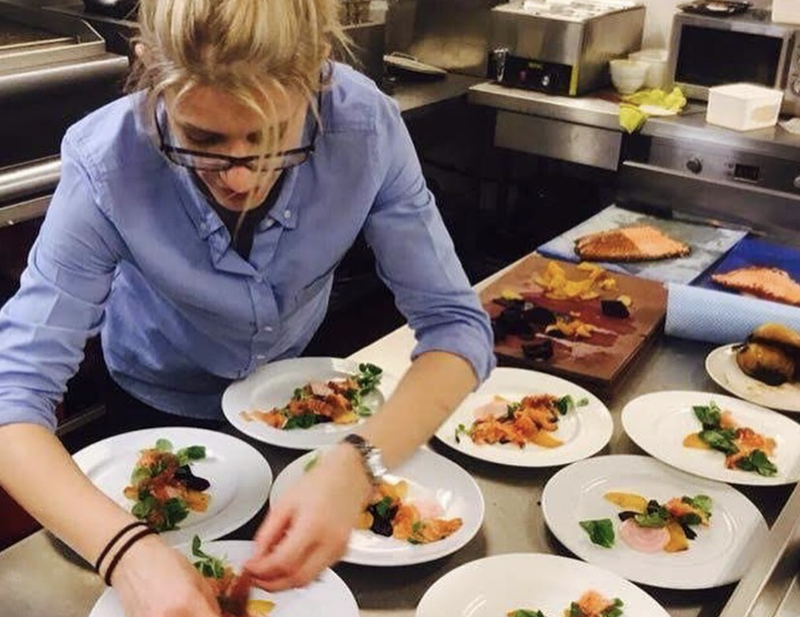 Market in your diary

We were big fans of Claire Woodier’s lively supper clubs over at New Smithfield Market where she ran the cafe there for years, cooking up creative, hearty dishes for the market workers from the early hours. So we’re pleased to see she’s teaming up with them and the Food Sorcery cooking school in Cheadle for a special event on September 24th. Claire will take her pick from Smithfield’s produce to produce a two-course lunch at the school. Guests will watch Claire cook and are encouraged to ask questions along the way. If they like, they can also visit the market with Claire at 7am for a tour (and a butty and a brew) as she introduces them to the characters of the Northwest’s largest wholesale fruit and veg market. The main course is Claire’s creative pork fillet ‘Waldorf’ wellington and there is a butternut squash based alternative for veggies. Dessert is sticky toffee plum pudding with spiced banana ice cream. Tickets are £80 per couple and you can book via Claire’s Instagram page. 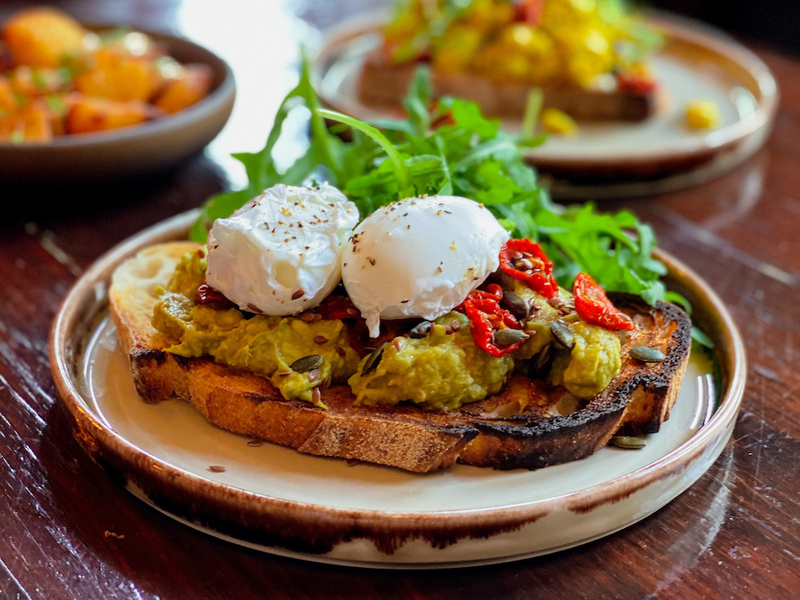 Over at the rebranded Kimpton Clocktower hotel, The Refuge restaurant has launched a brand new brunch menu to coincide with its fourth birthday on September 19th. Alongside all the usual butties, benedicts and boshed avocado are some more unexpected dishes like a lamb shoulder shawarma hash with poached free-range eggs & pickles and a Parsi-style vegan dish of scrambled tofu akuri with coriander, chilli and grilled sourdough. Teas, coffees and, yes, cocktails are all available too and dishes start at £7. 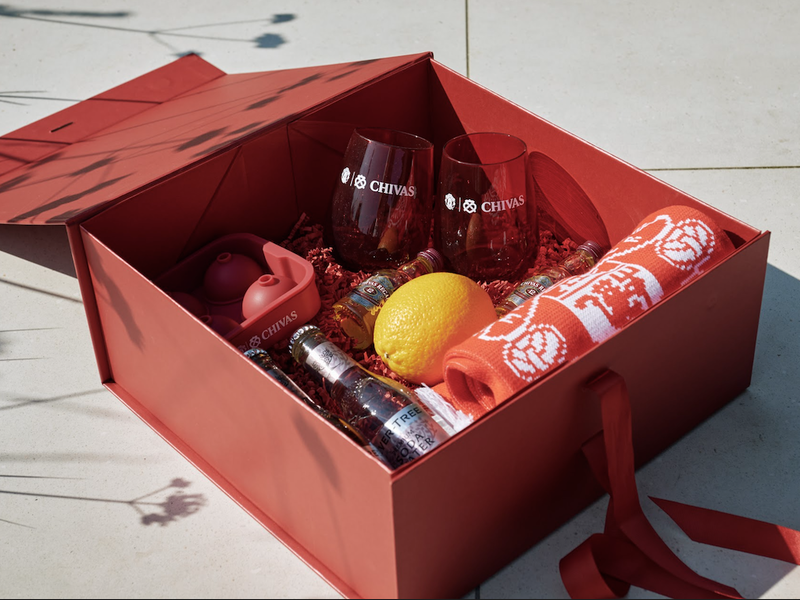 Fans of footy and a dram rejoice as blended whisky brand Chivas has launched a ‘Cheers from Home’ Delivery Service dropping off match day kits just in time for the second weekend of top flight fixtures. With football terraces empty, that’s no reason your own terrace shouldn’t host its own pre-game bar experience (with members of your household only, obvs). The match day kits provide fans with everything they need to create the perfect Chivas Highball from the glasses and ice to the whisky and garnish. The delivery service will be available to pre-order across GM selected parts of the UK from the 18th September. As Manchester United’s global spirits partner, Chivas will also be releasing limited edition Manchester United versions to celebrate the Club's first Premier League fixture of the season. The Chivas x Manchester United at Home match day kit will be available exclusively in Manchester, featuring team glassware and Club merchandise. Order yours here. 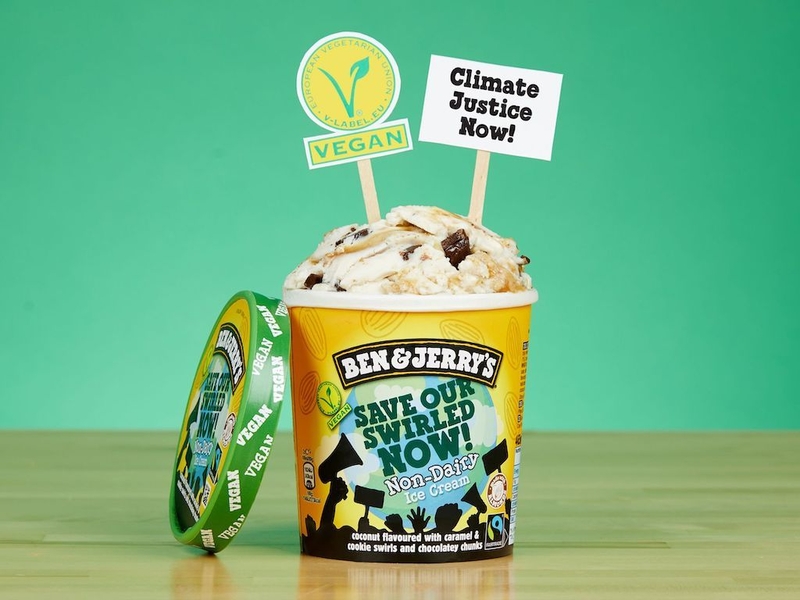 Doing their bit to save the melting ice caps, Ben & Jerry’s are launching their climate action themed vegan ice cream Save Our Swirled Now! in the UK this October. The vegan ice cream features a coconut base with swirls of cookie dough and caramel. Urging UK leaders to tackle climate change and put green solutions at the centre of their economic recovery plans. Ben & Jerry’s has become known as a socially responsible company and by raising awareness of the urgency of climate action through their huge commercial platform, they hope to make activism accessible and generate real change. Partnering with The Climate Coalition, the ice cream giants hope to inspire the UK to fight for a clean energy revolution that boosts jobs by making transport, power and housing future-proof, protect and restore our green and wild spaces and support to those most vulnerable to the impacts of climate change at home and abroad. Fans can take action by signing the declaration here. 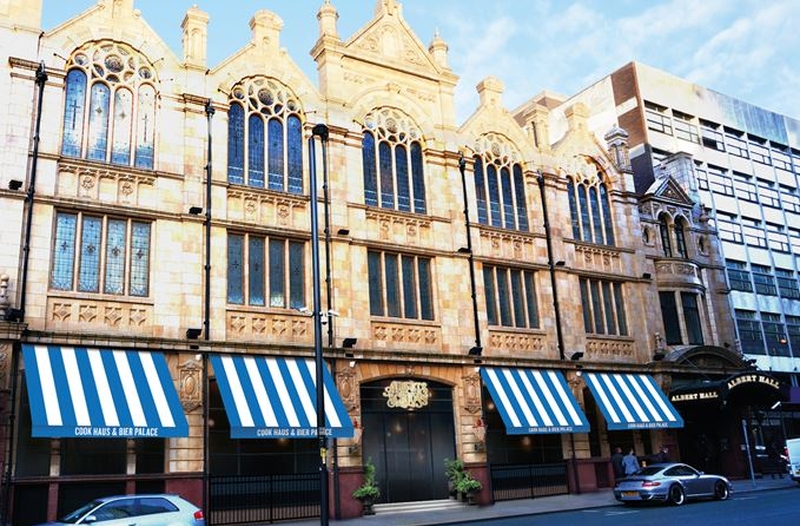 Schloss swans to the NQ

Manctopia is certainly the word on everyone's lips at the moment and the latest page in Capital and Centric's catalogue is a collaboration with the indie trendsetters who helped to transform The Northern Quarter way back when. Adelaide Winter & Joel Wilkinson are among our city's nightlife pioneers, the brains behind the likes of Trof, Deaf Institute and Albert's Schloss (although no longer associated with the Mission Mars group that operates Schloss and earlier this year). Together with their business partner, Daniel Mullen, they are launching Swan Street Firehouse. This will be just down the road from another of our city’s iconic music venues, Band on the Wall and a stone’s throw from Mackie Mayor on the outskirts of the Northern Quarter in an old MOT garage. It will be part of a new housing development from C&C and The Kamani Property Group. This one's going to be hot and we hope to bring you more details soon.

Like that? Why not also read - From dhal to design - ‘First-of-its-kind’ sustainable market launches in Manchester