The job could easily give you gout. It’s pretty well documented that dishes from professional kitchens are far more laden with delicious butter and oil than your own at home. So, as a professional eater, I try and maintain some kind of balance. I love a (good) burger as much as the next person but I try not to eat them too often.

Then every now and again, in the interest of a restaurant review, I have to make a sacrifice.

I love a nugget of that good ole Mancunian enterprising attitude.

Who am I kidding? I’ve had several burgers in the past month. I inhaled one from Burgerism, hungover at my desk a couple of weeks back, and a bouncy vegan one a week or so before that, I grabbed one from a stand at some event or other, so unremarkable I can't remember anything about it. I used to be quite partial to one of Colonel Sanders’ butties, but it’s been years since I indulged in that particular brand.

I live mere moments from Bird of Prey, the new chicken burger place just off Oxford Road, and it has been on the review list for a little while. I just never quite felt motivated to go. Walking past, it’s not somewhere that makes me crane my neck like the wafts from One Plus over the road do, nor does it beckon like a restaurant with flickering candles on the tables and a good wine list.

I have perhaps an unfair idea of most fast food places. I always expect Beavis and/or Butthead to be behind the counter, sullen and loathing the customers. Gobbing in the food behind the scenes. I’d probably have been a miserable sod if I’d worked in one of them as a teen. I was a miserable sod and I didn’t. So it took a raging bout of hangriness to motivate me to go.

And what a dick I feel, because Bird of Prey is nothing like that. The interior is bright but not headache-inducing, swaggering with youthful confidence. A hip-hop soundtrack unclenches our jaw and massages our shoulders as we settle in for a nice time.

Seating ourselves, as you do in these kinds of places, the guy behind the counter zips straight over to say hi. As someone who’s been trying grudgingly to accept the rise of the QR code in lieu of service for fear of seeming an out-of-touch grouch, this takes me aback. No QR codes on the tables in this textbook Gen Z joint. Just a really friendly guy keen to tell us all about the menu.

Saj (who it turns out is the youngest of the four brothers and a sister-in-law that own BOP) tells us they used to have Amber Cafe over the road 10 years ago - it’s now Cheeky Coffee - and they also run a driving school. I love a nugget of that good ole Mancunian enterprising attitude.

He tells me the food takes a little longer than in some places as it’s all cooked fresh. He also tells me I’ll not taste gravy like theirs anywhere else. He’s enthusiastic without affectation and clearly keen to make a go of this. So I really hope the food’s not shit.

Spoiler alert: it’s not. The Tribute (£7.95) - the most basic burger on the menu - is made from thigh, which everyone knows is the best bit of the bird. It flaps its wings and floats into my mouth, a distinct lack of grease weighing it down as it lifts my mood onto its back and gives me a quick drone flight around the room. Simple, but nicely done and makes me keen to try some of the more innovative things on the menu, like the one with brie and black aioli.

Over the table, my long-suffering is tucking into the slightly unfortunately named La Cuca-racha (£8.50) and making all the right noises too. Daubed with sriracha mayo, it’s a chunky beast, not too spicy, with freshness coming from pico de gallo and tangy chopped jalapeños. Buns are soft and fluffy and very pale yellow inside like baby chicks. I try to stop thinking about baby chicks.

That gravy is the thick kind, the texture of slightly let-down béchamel, crammed with black pepper - great for dunking.

Chickening out of trying the “insanity wings” (next time), crisp buffalo chicken wings (£6 for five) are meaty and more substantial than you sometimes find. They're glossed up with Frank’s Red Hot (why use anything else when Frank’s is the one?) and squiggled with blue cheese ranch dressing. They’re doing that red bone thing you sometimes find in wings that have been frozen, but despite that looking a bit scary to people paranoid about chicken, it’s all good, my friend. My bowels are absolutely fine the next day after sucking the meat from the bone like a cartoon cat. TMI? Sorry.

I’m so completely over the concept of loaded fries but allow myself to be cajoled into adding Messy Chick (£8.50) to the order. Flicking back through my memory bank leaning on my desk gazing out the window, it’s the cheese sauce that’s staying with me. It's all velvety and pooled at the bottom of this carton of fries (that could be a bit crisper tbh), chopped chicken strips, turkey bacon and jalapeños with white Alabama BBQ sauce (basically a zingy mayo) drizzled on the top. It’s the kind of food you can’t stop picking at, against your better judgement.

As we sit, bellies distended, quietly belching pink lemonade and diet coke into our cupped hands, we watch swathes of local students flit in and out for take-out. But it’s not just for students and Deliveroo, this place, it’s worth a visit for anyone partial to a hunk of deep-fried chicken thigh. I’m rooting for this group of lads and their chicken shop dreams, they’ve done a cracking job of this modern brand. If Archies can make a go of it, why can’t they?

Do us a favour and leave us a nice review on Google, says Saj as we get up to leave. I'll do you one better, Saj. 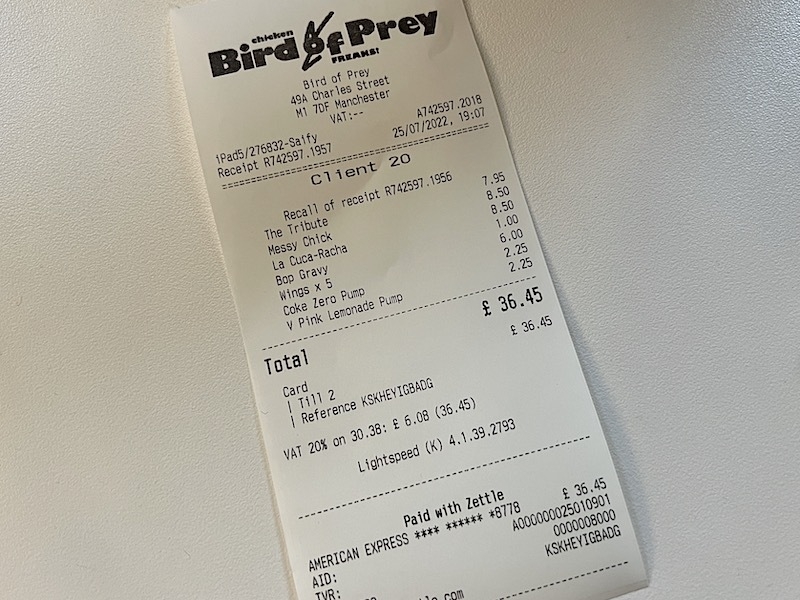