Beyond the city: how to spend a weekend in... Salford

Let’s clear something up – Salford is a city that also happens to be a borough of Greater Manchester. Its proximity and similarity to the city of Manchester often leads to Salford being mis-labelled a suburb but, as proud Salfordians are quick to point out, Salford is a city in its own right (with the bright pink WELCOME signs to prove it).

The city of Salford encompasses ten postcodes and twenty electoral wards spread over 60 square miles. It borders Manchester to the east, Wigan to the west, Bolton and Bury to the north and Trafford to the south, and has its own cathedral, world-class university and National League football club - and its own distinct history and identity.

There’s too much ground to cover in the space of a single weekend but, broadly speaking, there are two sides to Salford: the grit that inspired L.S. Lowry’s paintings (and the fictional town of Weatherfield, where Coronation Street is set) and the relative glitz of the modern Quays. To get a sense of Salford old and new, visit Eccles and the Quays and experience everything from historic pubs to canalside culture.

FRIDAY NIGHT: An evening on the Monton Mile, Eccles

The proliferation of cafés, restaurants and bars on Monton Road (aka ‘the Monton Mile’, even though the strip’s only a few hundred yards long) have led to Monton village being nicknamed ‘the Didsbury of Salford’. If that’s the case then Monton Road is its Burton Road, making it an ideal place for an evening out.

For a casual dinner, order a sourdough pizza, chargrilled cheeseburger or deli sharer board at 6/Cut or, for a special occasion, make a reservation at Blacksticks; one of the longest serving restaurants in the area, its modern European menu comes highly recommended by regulars. Follow with drinks at Playfoots, Malt Dog or Bodega, or head to the pub at The Blind Pig, The Park Monton or The Blue Bell.

SATURDAY: Discover MediaCityUK and the Quays

Start the day with a visit to Salford Lads' Club, opened in 1904 by Robert Baden-Powell (who later founded the Scout movement) and described by English Heritage as ‘the most complete example of this rare form of social provision to survive in England’. The club is probably best known as the location of the famous, often-recreated photo of The Smiths (which now hangs in the National Portrait Gallery) and mega-fans can arrange to view a memorabilia room.

Just over a mile away is MediaCityUK, home to BBC North and ITV Granada. Popular TV shows including A Question of Sport, Coronation Street and The Jeremy Kyle Show are filmed here but, if the various studio/set tours are fully booked, there’s still plenty to see outside - from statues of CBeebies characters on The Piazza to the Blue Peter Garden and Gold Badge Walk on The Green. You may even spot BBC Breakfast presenters filming outdoor segments.

Order a coffee at Grindsmith and admire the custom stained glass window while you wait, then have lunch at Catena MCUK, one of few independent eateries at MediaCity; the cosy, reclaimed-chic café offers a range of delicious Spanish, Jewish and Eastern European inspired small plates.

Walk to the imposing Lowry Centre, a theatre and gallery with the largest L.S. Lowry collection in the world (as you’d expect from a building named after him). From here, you can follow the Salford Quays Heritage Trail around the area’s historic waterways and post-modern architecture; the circular three-mile route passes basins, bridges and canals plus points of interest including public art, the Helly Hansen Watersports Centre, Centenary Walkway (with views of Old Trafford across the water) and the Imperial War Museum North (IWMN).

Behind Daniel Libeskind’s eye-catching façade - designed to represent a globe shattered by war and conflict - the IWMN hosts interactive exhibitions and activities covering all twentieth century conflicts (many free of charge).

When you return to The Lowry, you’ve got two choices – shop at the Lowry Outlet or walk another mile to visit the Seven Bro7hers taproom in nearby Weaste for an afternoon beer. The brothers started their namesake brewery business and their four sisters followed suit with the launch of Four Sist4rs gin: together, the eleven McAvoy siblings may be the biggest single-generation family in the alcohol business.

Head back to MediaCity for fine dining with a view at The Lowry’s Pier Eight, followed by a theatre show and/or drinks with a view at The Alchemist (header image). Overlooking the Manchester Ship Canal, situated on the bridge between MediaCity and The Lowry, this futuristic gold building boasts an outdoor terrace where you can sip a cocktail and watch MediaCity light up as the sun goes down. 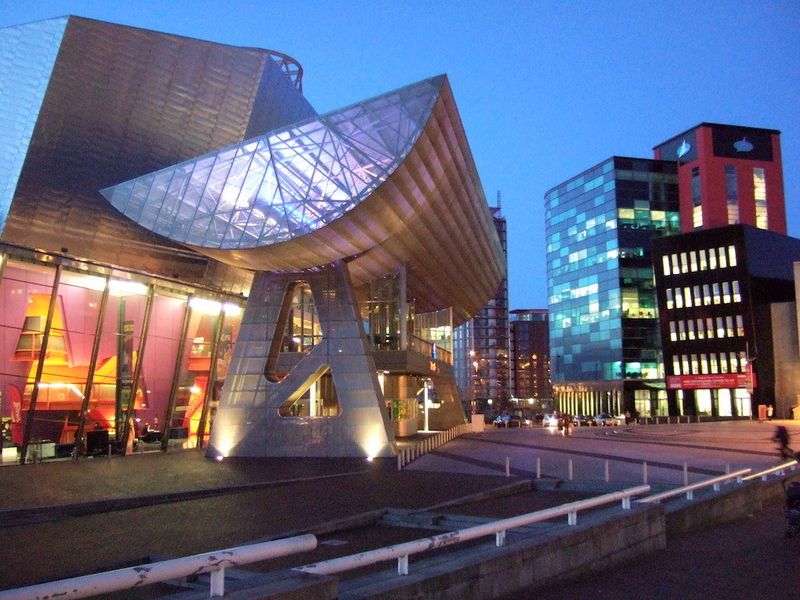 After coffee and pancakes at Vintage Ambiance, head to the start of the Monton and Roe Green Loopline Heritage Trail. The two-mile route starts at Monton Unitarian Church, follows part of the old Roe Green railway line and returns to Monton along the towpath of the Bridgewater Canal (‘the birthplace of the transport revolution in the UK’). You also have the option to extend your walk through Worsley and Roe Green to Little Hulton, or along the old Patricroft to Molyneaux/Clifton Junction line to Swinton.

Back in Monton, enjoy Sunday lunch on the terrace at Crompton’s at the Waterside, where you can watch barges pass by and ponder the purpose of the faux Lighthouse on the other side of the canal; the unusual landmark was built 30 miles from the coast for no apparent reason.

If you’re into street art, conclude your afternoon by seeing the three bee-themed murals along Monton Road; Bee Strong MCR and Amongst our Bustle there's always a Buzz on opposite sides of Lansdowne Road and Bee the Best Version of You above Zafrani.

Eccles is known for its historic pubs, so why not head into the town centre and spend an evening on the Eccles Ale Trail? Although some of the featured pubs have since closed (a sad fact of life in this area), you can still discover vintage décor and a bit of local history with your pint at The Lamb, The Duke of York and The Albert Edward.

Nearby, the Eccles Wakes Mural (at 25 Church Street) depicts people celebrating the dedication of the nearby Parish Church of St Mary by dancing and feasting on Eccles cakes, which were first sold nearby at 56 Church Street (look for the blue plaque).

If there’s time before last orders, head to the part of Salford closest to Manchester city centre (just over the river from Spinningfields, near Salford Central station) and follow the Chapel Street Ale Trail through Salford’s oldest quarter; don’t miss The King’s Arms, which usually offers live entertainment upstairs.

NB: The trails mentioned in this article were produced by Visit Salford several years ago and may include some out of date references, but the routes remain largely accurate

Don't forget to read the first three instalments of Beyond the City in Didsbury, Altrincham and Chorlton

Opinion: Stop sh*gging the Hacienda
What you say
Read Next
● / Travel