Beyond the city: how to spend a weekend in… Chorlton

Chorlton-cum-Hardy, to use its full name, is often derided for being a bit too bohemian/lefty/middle-class for its own good – but if that’s the price to pay for a reputation as the liberal heart of Manchester, Chorlton can well afford it.

Its community feel and range of property options, from modern flats to roomy period homes, mean you’ll find young creative types living alongside well-to-do families on Chorlton’s leafy streets. Morrissey, The Stone Roses and Badly Drawn Boy (and surprisingly, The Bee Gees) have all called M21 home but, if you don’t have a rock star budget, you’ll probably live north of the High Lane (or even out on the ‘Chorlton borders’, or 'ChoBo', as estate agents call certain parts of the neighbouring Whalley Range, Firswood and Stretford areas).

...allegedly, more copies of The Guardian are sold here than anywhere else outside London

The ‘village’ area around Beech Road is where you’ll usually find locals enjoying the best of Chorlton’s shopping and dining scene; allegedly, more copies of The Guardian are sold here than anywhere else outside London. And just half a mile away, where Wilbraham Road meets Barlow Moor Road, there’s a more down-to-earth mix of independent and chain stores, coffee shops and casual dining/drinking spots.

FRIDAY NIGHT: Dinner and drinks at the ‘Four Banks’ crossroads

Some of the best bars outside the city centre (a caveat which is barely needed) are within stumbling distance of the intersection between Wilbraham Road and Barlow Moor Road. You could meet and eat at local favourite The Beagle, with its cheerful décor and Mexican-inspired menu, but the piled-high poutine (fries and cheese curds smothered with gravy) at Brewski is a delicious way to line your stomach and leave you swearing you’ll never settle for the chippy again. Enjoy a beer, gin or bourbon from the transatlantic drinks menu while the carbs go down.

For a relaxed pint, head to Marble Beer House (local ales and own-brand beers), The Chorlton Tap (a Good Beer Guide pub for 10 years in a row) or The Sedge Lynn (yes, it’s a Wetherspoon but you can enjoy a surprising range of real ales in this beautiful listed building). Bar-wise, Cask & Kiln, The Font and Mary & Archie are all good choices, and you can get down to DJ sets at Dulcimer and Elektrik.

SATURDAY: The best of Beech Road

After a lie-in, head to Beech Road – the heart of Chorlton (as depicted in the Beech Road Mural) and one of Manchester’s most stylish streets, whose attractive boutiques and cafés are often used as filming locations. It was also the country’s first ‘cashless’ shopping area (just for a day, in 2014, when only card payments were accepted) but, however you’re paying, you could part with anything from a few pounds to a couple of hundred here.

Get a takeaway coffee from Foam and a fresh croissant from Epicerie Ludo, where it’s hard to resist buying the whole store; the grocer and wine merchant’s selection of fine food includes everything from store cupboard staples to freshly roasted coffee.

You can find edgy fashion from carefully curated labels at McQueen Independent and custom-made designs at Trouble at Mill (whose name is a nod to the North’s industrial heritage). For unique gifts, accessories and homewares, Hurricane, Belly Button Designs and No.68 have you covered, and don’t miss Franny & Filer for contemporary jewellery by over 50 UK designers.

Set down your shopping bags at The Parlour, an MFDF Award-winning gastropub which serves locally sourced British food in a convivial setting. After lunch, visit the Creative Recycling Gallery - a social enterprise which showcases free-standing and framed artwork made from discarded materials, plus there’s a small sculpture garden and ‘craft cabin’ where you can take classes on everything from glass fusing to lino printing. For more locally produced, handmade designs, you could also take a short detour to Chorlton Art Market on Wilbraham Road.

In the evening, split a sharing board or some small plates at The Laundrette, ‘proud supplier of cocktails and carbs’, then take your pick of the pubs near Chorlton Green. The Tudor-era Horse & Jockey overlooks the Green and has its own micro-brewery (The Bootleg), plus there’s The Beech (where The Stone Roses once hung out between recording sessions) and The Bowling Green (licensed since 1693, making it one of the oldest pubs in the area).

SUNDAY: Brekkie and an afternoon at Chorlton Water Park

Enjoy a traditional, vegetarian or vegan breakfast at Tea Hive, accompanied by tea with your choice of soya/almond/coconut/oat milk, then pick up some picnic food from Unicorn Grocery - one of the UK’s largest wholefood shops - whose range of organic and fair trade produce attracts customers from all over Manchester.

Nearby, find the silver plaque at the entrance to Cosgrove Hall Court and rue the day that developers turned the former Cosgrove Hall Films premises into retirement flats rather than an animation museum. Some of the UK’s most recognisable children’s TV programmes were produced here - including Danger Mouse, Count Duckula and Chorlton and the Wheelies - and the archive is now based at Waterside Arts Centre in Sale.

Walk along Keppel Road, where The Bee Gees lived for almost eight years of their childhood, to the Banksy-style portrait of Quentin Crisp on the corner. The eccentric writer, actor and gay icon died in Chorlton and was cremated at Southern Cemetery: the largest municipal cemetery in the UK (second largest in Europe), home to the graves of local legends including L.S. Lowry, Tony Wilson and Sir Matt Busby.

Top up your picnic basket at North Star Deli and Tiny’s Tipple before heading to Chorlton Water Park, passing Aycliffe Avenue (where George Best lived on and off in the sixties/seventies) on your way. Enjoy a picnic by the lake, a flooded gravel pit which was excavated during construction of the M60, with Mersey Paradise by The Stone Roses playing quietly in the background (it was inspired by the area). The 170-acre nature reserve feels worlds away from the city, with a thriving bird population to spot (including ducks to feed) and opportunities for water sports and fishing.

Finish the weekend with dinner at Double Zero or Lord of the Pies; the former is known for authentic Neapolitan pizza (and BYO booze policy) and the latter offers award-winning pies with a variety of mash options. Or, if the weather’s bad, replace the picnic with Sunday lunch at The Creameries; the crowd-funded former dairy has been attracting attention for its menu based on locally grown vegetables, ethically sourced seafood and wild meat.

Don't forget to read the first two instalments of Beyond the City in Didsbury and Altrincham, Next up... Salford.

Chinese New Year - Year of the Rat celebrations announced
What you say
Got an account? Login, to comment/rant.
1 Opinions

Stephen Newton 7 June 2018
I'm more likely found in the Parlour, but there's no surprise in finding a wide range of real ales in a Wetherspoons. They've always led on that.
Read Next
● / Venues 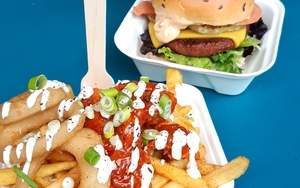