Eels, ice cream and ox two ways, we round up our favourite eats of the year

OUR food writers have had their fill of fine dining this year – from Ancoats to Stockport and further afield in Lancashire, Cumbria and even Spain. But it's not all about 'fayn-dayning', they’ve also been raving about some of the less high-end eats that have made their way onto their plates, including chips with a difference (and we quote) 'a bloody fantastic cheese and onion pie.'

Here are the culinary highlights of 2019 from the Manchester team… 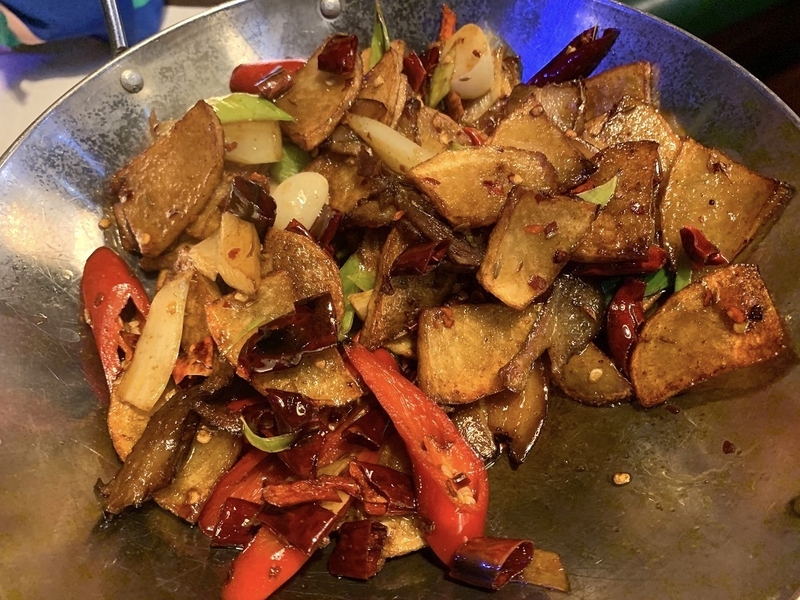 What’s my favourite dish from a Greater Manchester restaurant this year? There have been many, and many a restaurant I’ve enjoyed for the complete experience: food, drink, service and atmosphere. Despite the Michelin star at Mana, 2019 for me has not been about fine dining, but about simplicity. Dishes I’ve particularly enjoyed include sea bream at Street Urchin, a remarkable pork chop from El Camino and a beautiful Lancashire hotpot from Mamucium, the Hotel Indigo restaurant next to Victoria Station. I’ve become attached to Wood close to HOME arts centre, while the new Salvi’s Northern Quarter is looking promising. But the battle for me comes down to a fish and a pig.

It’s between the simplicity of a scorched skate wing with a perfect beurre at Fin in Mackie Mayor and the rumbustious chilli, onion and garlic onslaught of sliced potatoes and chewy, fatty bacon at Hunan on George Street. Decisions, decisions... It’s the Hunan dish. Got to be, given I visit at least once a month to snaffle down this oily, spicy, filling, burning, delicious cauldron of food full of heft, texture and flavour. It’s my perfect comfort food this; the perfect pick-me-up at any time of the day, but especially if it looks like being a long night ahead – the portion size is huge. Jonathan Schofield 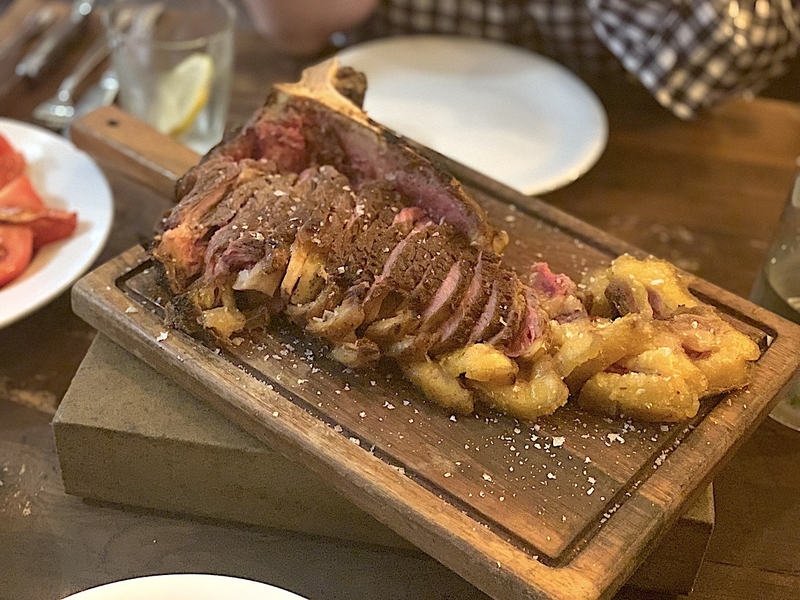 It’s not an easy ask to think back and pick out the very best things you’ve eaten over the last 12 months. I’ve been very lucky – and after looking through my phone, it turns out I’ve also been very bloody greedy too. Highlights of happiness included a perfect salted bronte pistachio gelato from Taste It, the tiny Italian-run ice cream parlour in Blackfriars, and a bloody fantastic cheese and onion pie from the Church Green, Lymm, closely followed by a sunny spring walk round the dam.

I learned how to make proper Spanish croquettas with tips and tricks from Miquel Villacrosa of Tast Catala but the most satisfyingly calorific thing I ate was a steaming pile of spaghetti carbonara served from a bowl made out of Pecorino cheese at San Carlo. Lamb brochettes washed down with an excellent rum punch at Wilderness/Wolf At The Door made me happy, then so did a creamy crunchy pasteis de nata from Federal eaten at my desk.

The best overall restaurant experience was a date night with my husband at Erst in July. Each plate, from ox heart and beetroot to perfectly grilled sardines, was simple perfection. But just pipping everything at the post was a Rubia Gallega sirloin on the bone from Baratxuri in Ramsbottom (£68/kg) – the highest grade sirloin from minimum six-year-old, 100 per cent grass-fed Rubia Gallega dairy cows, dry aged for at least 35 days and regarded as some of the very best beef in the world. Owner Joe imports whole sides and butchers them in house to ensure quality and keep the costs down a little. One will easily serve two people. Once ordered, they take them out of the cooler and let them get up to temperature for 45 minutes before briefly flashing them over hot embers and serving blue along with a huge tomato salad and salty flash-fried padron peppers. Rich and almost buttery, the fat is as much a star as the meat. Best dish of the year. Deanna Thomas 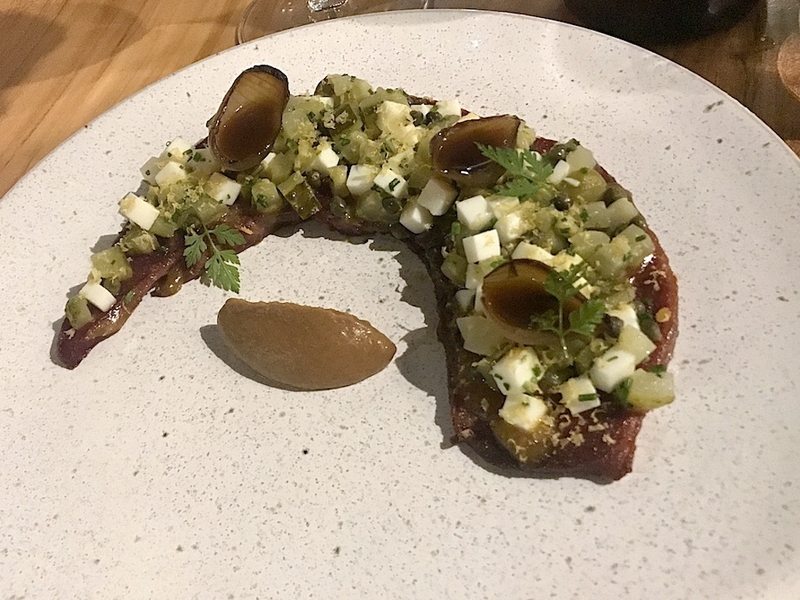 What a year of stuffing my face it’s been, and flicking through the pictures on my phone reminds me just how lucky I am. The most mind-boggling dining experience of my year has to be the three Michelin-starred Azurmendi in the Basque region of Spain. They say the third star is awarded for a truly unique experience and that it certainly was, from the picnic basket of Willy Wonka-esque snacks on arrival, to the kitchen tour where the crew of chefs greet you in bizarre, choreographed unison before one of them injects truffle broth into an egg yolk sac, to the prawniest prawn (pictured top) I have ever eaten – all within a sustainable glasshouse overlooking a vineyard full of the Hondarrabi Zuri grapes that make the region’s famous Txakoli wine. A four-hour meal I will never forget.

But there were beautiful tasting menus closer to home as well; my favourites being a veggie one at Restaurant MCR, a folksy one at Where The Light Gets In, a belly-busting one at The Freemasons in Wiswell and a newly bespangled one at Mana in Ancoats. For a less wallet-busting option, I’ve found Six By Nico’s six themed courses for less than £30 delightful every time – it has to be the cleverest new opening of the year.

Ancoats is undoubtedly the food Mecca of 2019 and I had outrageously good octopus at Canto, a breakfast of my dreams – rhubarb French toast – at Trove and the best beer snack EVER: cheesy churros at the Edinburgh Castle, whose pickled ox tongue starter in the upstairs dining room was another 2019 highlight. I got my chops around a world of flavours at more affordable prices too: Venezuelan comfort food heaven at Mia’s Arepas, a pork salad to die for at Jub and some incredible malai kofta at the entirely vegetarian Sanskruti in Withington. God, we’re lucky to have all of this on our doorsteps, aren’t we? Kelly Bishop 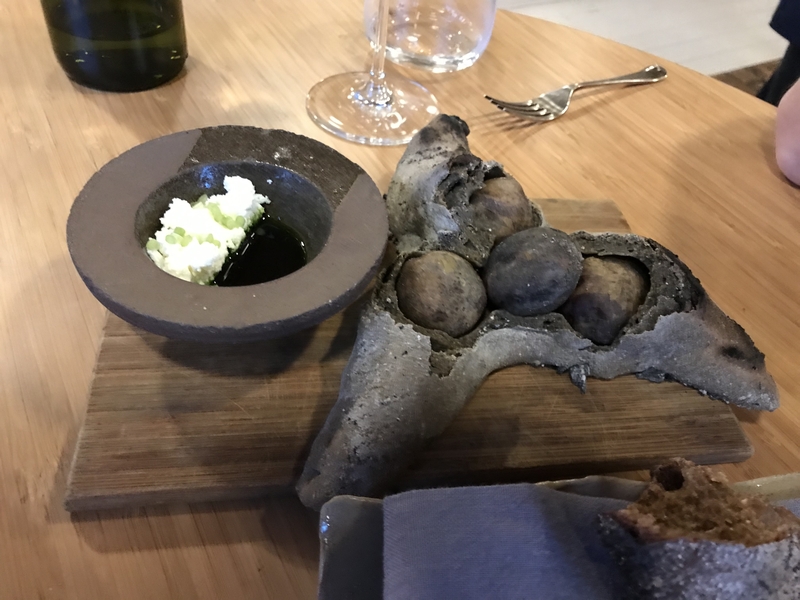 Potatoes - Where The Light Gets In (part of tasting menu £90)

Probably the biggest food news story of 2019 has been the continued regeneration of Ancoats, as exemplified by Mana’s Michelin star; Manchester’s first in 42 years. As much as I enjoy exploring the neighbourhood that my dad still calls Cut Throat Alley (more like stuff your face alley, these days), my heart still belongs to the suburbs.

My most memorable dishes have been a mixture of oddities and pure taste sensation, as indeed they should be. Potato cooked in ash from Where The Light Gets In (part of a set menu) had the advantage of being both, looking like an interstellar craft (albeit a dusty one - hey space travel is hard) while tasting divine. I loved a Jenga-style stack of chips crafted from split peas (of course) and served with mushroom ketchup at Chorlton’s The Creameries. The cheesecake from Baity in Didsbury is a must-try if you like your puds creamy, dreamy and indulgent like I do.

One of the blessings of living in Manchester is that not only is there loads of exciting food and drink on our doorsteps but journey a little further afield and you have the richness of Lancashire and Cumbria, positively studded with stars, right there if you fancy a gastro-break. I was lucky enough to enjoy Kevin Tickle’s offering at Forest Side before he departed for pastures new, including an exquisite sliver of sea trout (part of a set menu).

Drinks-wise, it has to be a horn of rhubarb mead from Stockport’s one and only Viking tapas bar, Vinaböd, to welcome in the new year (I did say there would be oddities and this was one of my favourites). Skol! Lucy Tomlinson

Where The Light Gets In, 7 Rostron Brow, Stockport, SK1 1JY 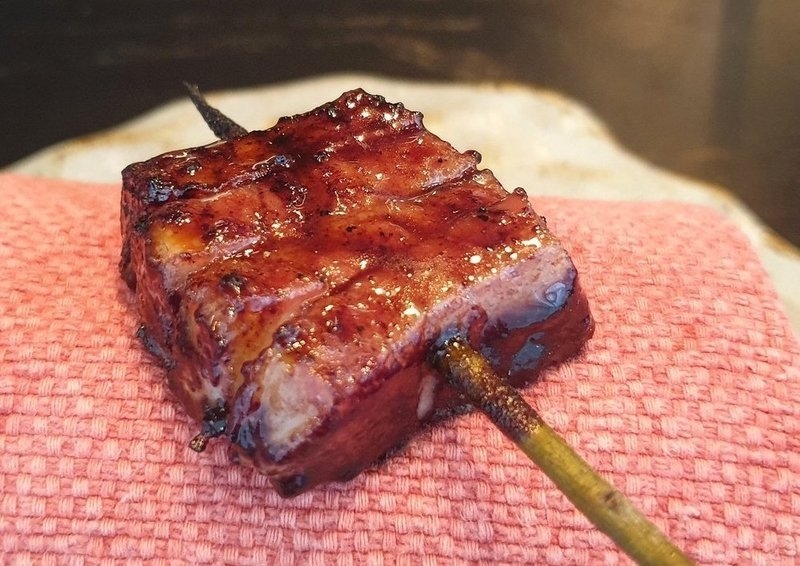 Think on this as 2019, my Year Of The Fish, trickles away into a new decade: there are 800 species of eel on the planet. Which one wriggled its way into Mana signature dish smoked yakitori eel is beyond my ken. Four times I ate there across the restaurant’s annus mirabilis (Michelin star, four Manchester Food & Drink Awards, No.3 in Harden’s UK Top 100), and that mini masterpiece invariably stole the show.

Elsewhere, my pescatarian cravings were satisfied by a sublime Whitby crab risotto at The Fisherman’s Table in Marple, a bisque teeming with denizens of the deep at Street Urchin and the Kilpatrick oysters at the Edinburgh Castle, each with its own Worcester sauce, bacon and lemon sorbet topping. It’s also still hard to register never again will I get to probe the gelatinous crevices of a salmon head at dear departed Umezushi.

But back to that stalwart on Mana’s £105 14-course tasting menu. The eel breathes of forest camp fire embers, a glaze of roasted nutritional yeast a genuine case of umami knows best and a second glaze of blueberry vinegar adding extra fruity funk. You understand why chef/patron Simon Martin was handed custody of the charcoal grill during his time at Noma in Copenhagen. The rest of the menu is packed with Dish Of The Year contenders, too. Neil Sowerby 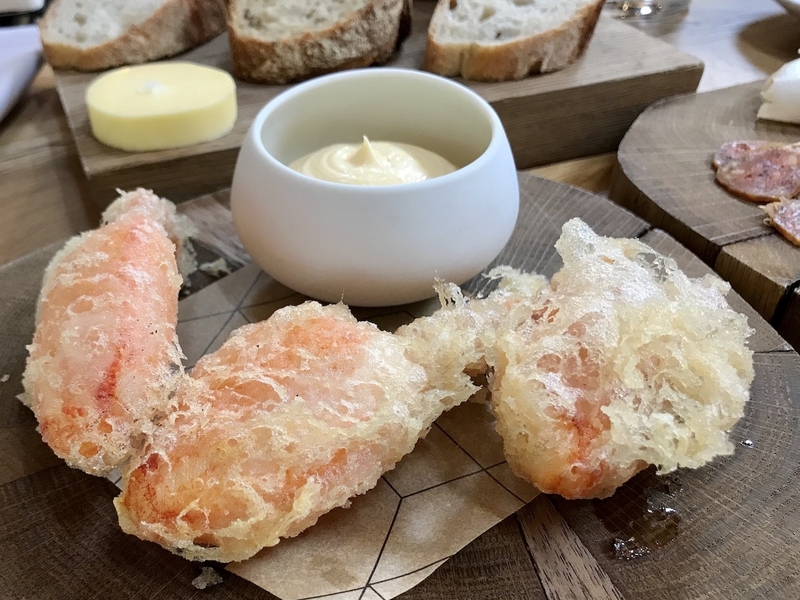 Bloody hell, having difficulty with this one. Take fish and chips with peas; very little can beat this when done well. The winner of a recent competition to find the best in Greater Manchester, Tommy’s in Heywood was sensational.

Then again, I can clearly tell you the worst thing I ate. Part of the Outback Challenge at Australasia, where they were raising money for the Tim Bacon Foundation for charity. Bugs were on the menu. They didn’t turn out that bad to be fair, one of them could be mistaken for eating sugar puffs, a childhood favourite. Then came the crunch of the locust, the gooey, slimy insides that fucking revolted the senses. I nearly lost the contests of my stomach as the locust did the same in my mouth. Nasty.

The dish which has stuck in my mind though and can be said to be my favourite of the year had simplicity, texture and flavour with the clarity of a five-carat princess cut flawless diamond. It wasn’t, however, £150,000. It was twelve quid.

Three native lobster claws, blades removed yet leaving their claws intact. Deep fried in a gossamer cloak of tempura batter, served with a mayo that I think included a tickle of wasabi giving a sharpness slapping your tongue in a wholly life affirming manner; the meat sweet, just out of the sea off Anglesey. The Barn at Moor Hall, Moor Hall’s little brother, can please just as much as the big brother can. I’m going back. Mark Garner

Like that? Here’s the best dishes roundup from December 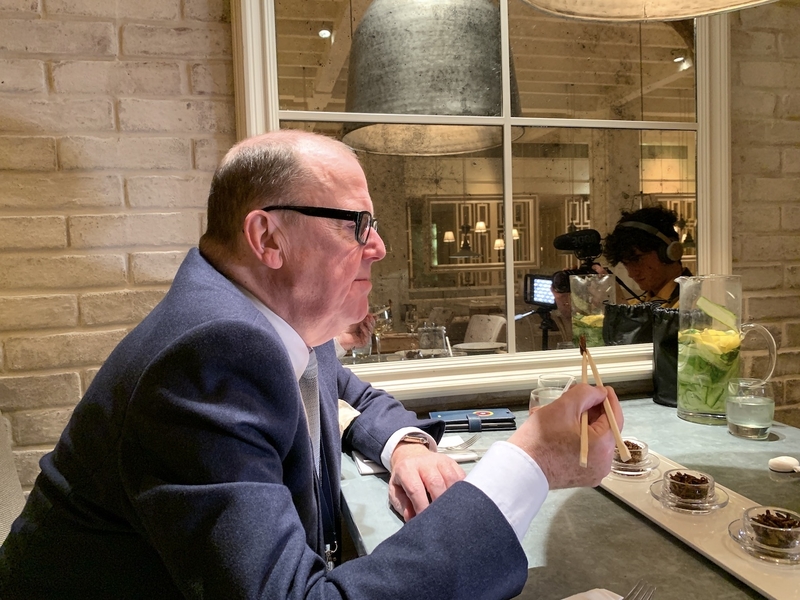