It's got two Grade 1 listed structures and another which is unique in the world, yet it's a mess.

We’re talking Barton-upon-Irwell which lies, unusually, on both sides of the Manchester Ship Canal, one part in Trafford MBC and the other in Salford. Barton should be the Iron Bridge of the North attracting thousands of tourists with canal side cafes and interpretation panels. It lies less than a mile from the Trafford Centre which boasts (in normal times) 35m visitors. All it would take is an act of will.

People who have driven through the area, cursing at traffic jams or maybe walked the area, might think I'm mad given its state. But the evidence is all there. 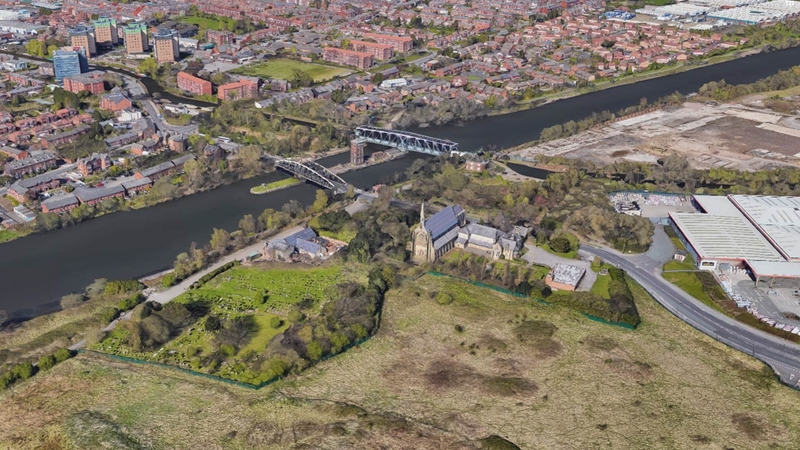 Here’s an inventory of the assets.

The first and only swing aqueduct in the world. This turns into a vast tank holding 800 tons of water when it swivels the Bridgewater Canal over Manchester Ship Canal. It was designed by Sir Edward Leader Williams and opened in the 1894, the same year as the Ship Canal opened. It's a piece of engineering brilliance and just about still functioning, despite it being in a dreadful state of repair.

A few metres away is Barton Swing Bridge this time for road traffic, by Leader Williams again, and again, a proper rusty mess.

Between the two is an island with the control tower for both.

All three elements are an ensemble, part of a package. Unaccountably they are listed as Grade II* which is ridiculous, they should be Grade I. Maybe there's been the usual bias against civil engineering as opposed to architecture, even though the swing viaduct is unique, or perhaps they have been downgraded by their decrepit state. It's a surprise anything works at all.

On the Trafford side of Manchester Ship Canal is All Saints RC Church from 1865. This is by EW Pugin and 'his masterwork' according to the nation's main architectural guides, the Pevsner series. EW Pugin also designed the celebrated Gorton Monastery. All Saints is a better building. It was built at the behest of the de Trafford family and incorporates a splendid family chapel.

This and the presbytery next to it are both Grade I listed. Neither are open to the public. The church reveals itself on just a few days a year.

Crossing the Manchester Ship Canal on the swing viaduct is the Bridgewater Canal which is the oldest and first fully artificial industrial canal in the country. It brought coal into Manchester city centre from Worsley and is one of those symbolic pieces of civil engineering which act as a harbinger of the Industrial Age.

On the Salford side of the Ship Canal are the handsome stone remains of the first aqueduct from 1761 which was a sensation and attracted visitors from across Europe. The aqueduct was designed by James Brindley. A couple of years ago a garden and wildlife area was created by Salford, the only authority or organisation in the area to come out with any credit in this story. Covid-19 neglect has meant there's been some deterioration but this can quickly be remedied.

Just behind All Saints is the graveyard of the demolished Anglican church of St Catherine's. One grave stands out because it is massive. This is the memorial, or rather monument, to Marshall Stevens who was instrumental, as the General Manager, in delivering Manchester Ship Canal and then moved on to be the inspiration behind Trafford Park Industrial Estate.

This little area split by the noble Manchester Ship Canal is incredibly rich in the physical remnants of engineering and architectural talent. It's one of the richest such places in the UK. It is special.

We got in touch with Trafford Council about the current decrepitude, who told us to get in touch with Peel Land & Property (L&P) an arm of Peel Group. Peel L&P own Manchester Ship Canal, the Bridgewater Canal and thus the Barton Swing Aqueduct and Bridge. Peel built the Trafford Centre which lies in Trafford Park. The neglect by Peel L&P of their Barton assets is shameful.

Manchester Ship Canal was built by public money, by the citizens of Manchester's money, and now the private company that prised the Ship Canal from the city in the 1980s is allowing the legacy of that epic endeavour to rot away.

But there is hope, for the swing aqueduct at least.

After quite a while, we eventually received this from Peel L&P.

'Peel L&P are working in partnership with Salford Council, Trafford Council, TfGM and Peel Ports to promote the ‘Barton Bridges Heritage area’ (BBHA). A key milestone has now been realised to unlock investment in this key gateway to allow the first phase, the Barton Aqueduct Green Link, to progress through to business case delivery.

'Peel L&P, supported via Salford City Council, is close to being allocated £4.8 million from the Mayors Walking and Cycling Challenge Fund (MCF) administered by Transport for Greater Manchester (TfGM).

'The ambition is to reinstate the historical walkway across Barton Aqueduct and provide an extension of the Bridgewater Way from north of Barton Lane in Salford to the Trafford side, reducing the need for those users to use Barton Swing Bridge.

'As part of the project, the revitalisation and promotion of Barton Aqueduct will be at the core, as the extension of the Bridgewater Way will be to reinstate the walkway across the Aqueduct and open this to the local community, commuters, walkers and cyclists which is currently not easily reached. Peel L&P and Peel Ports, the structure owner, will ensure that the Aqueduct will also be maintained alongside the MCF funded project.

'Once complete, the project will provide an alternative route and strengthen the Bridgewater Way as a key sustainable route to work and for leisure. It will also provide a continuous 20 mile no-traffic link from Wigan through Salford into Castlefield and into Trafford to Altrincham.'

This is good news...for the aqueduct, especially if work can be progressed within the target time of a couple of years.

However this work would be just stage one.

Trafford MBC were evasive in all this, passing the buck to Peel L&P, but Trafford needs to take active steps to deliver landscaping in the area, pushing Peel L&P into further action where necessary. The land around the ruined house on the Trafford side of the aqueduct and reaching to the main road is particularly vile. Landscaping is also needed in the area around the Marshall Stevens memorial.

The friars at All Saints Friary need to get involved and open their 'cathedral in miniature' regularly to the public.

All this takes is an act of will.

If Peel can oil the wheels to help deliver the proposed Therme Manchester and spend millions and millions on other projects right across the North West surely they can divert some money to the projects which gave them their huge influence in the first place, such as the Manchester Ship Canal and the Bridgewater Canal.

Other areas with superb assets that once mouldered and were within a hair's breadth of being destroyed or dismissed have proved of immense importance to regional economies through imaginative and creative re-invention. The Albert Dock in Liverpool was a ruin once, people would have laughed at Castlefield and Ancoats being re-invented, especially the latter.

The recent work at the Delph in Worsley prove the point. A neglected area has been made visitable and for want of a better word, lovely.

The redevelopment would add context and gravitas to what is effectively Manchester's mini-Las Vegas half a mile away. At Barton-upon-Irwell there could be epic engineering, unique features, great architecture, all linked by lovely landscaping and good hospitality venues with the odd tasteful income generating apartment scheme thrown in.

In an area of the unreal and the ersatz in architecture there could be something solid, potent and beautiful to counterbalance the breezeblock and the render. This place, done well, would attract tens of thousands of tourists and visitors each year.

Like this? Read - Demolished or destroyed - Twelve Lost Buildings of Manchester