An interview with... The Printworks

Sleuth: "Isn’t it irritating that lots of snobs think you are a bit vulgar, or even a bit crap?"

Printworks:  "Oh, it’s not just the snobs. Lots of other people don’t like me either. But that doesn’t matter because I have huge points of distinction compared to other places in Manchester."

Printworks: "Nowhere else generates the amount of vomit both inside and outside as I do."

Anybody got an inflatable cock I can wave around?

Printworks: "No, proud. People who come here know how to have a laugh. A proper laugh. No beardy bollocks and fey #metoo crap here. I’m like Blackpool without the beach and fewer Glaswegians. I’m like Ayia Napa without the sun. I’m best for something else as well..."

Printworks: "On the average night there are more hen parties in here with more inflatable penises than anyway in the UK, aside from Newcastle. And maybe the Village. One thing confuses me though..."

Printworks: "The cinema. I can never remember its name, the Odeon, was it AMC for a bit, now it’s something like Vue or Zoo? I wish it would make up its mind. But I think the IMAC cinema is good."

Sleuth: "I think you mean IMAX."

Printworks: "Really? Bez told me it was IMAC when he was helping put those bee hives on my roof."

Sleuth: "And you believed him? What did he tell you about them?"

Printworks: "I think he forgot about them soon after promoting the launch. He told me we need bees in the world because without their buzz posh people would have to go fracking flowers. Bastards. Not that we want any posh people in here. Bez was a nice man, couldn’t understand a word he was saying, if the truth be known. But he seemed sound."

Sleuth: "Are any of those bees still alive or has Bez smoked them?"

Printworks: "I smoked them. 'Honeyed skunk' I’d call the sensation."

Sleuth: "Wow. Any other points of distinction about you?"

Printworks: "Oh yes, Waxy O’Connors has the largest dead Irish oak tree inside a building in the country. I’m never sure why that’s a plus point, as such, but they seem proud of it. And the Hard Rock Café here is the only one in the world."

Sleuth: "You know that’s not true."

Printworks: "I do, but it makes me feel important. Otherwise, I have to admit that my proximity to Victoria Station was designed to ensure that other Mancunians know exactly where all the people from Rochdale, Bury and Oldham are on a Saturday night. Have I mentioned the vomit?"

Sleuth: "So why are you called The Printworks?"

Printworks: "It’s a licence to ‘print’ money by offering a standard, could-really-be-anywhere-experience to people who can only cope with national brands and like to fight at taxi ranks and be sick on each other's shoes."

Sleuth: "No, that’s not the reason for your name. It refers to the fact you used to be the site of a huge newspaper printing empire."

Printworks: "Did I? Who cares? You sound like a snob. Shit, I wish I was more than seven Jager bombs in. Still, a bit pissed if truth be known. Anybody got an inflatable cock I can wave around. Oops..." 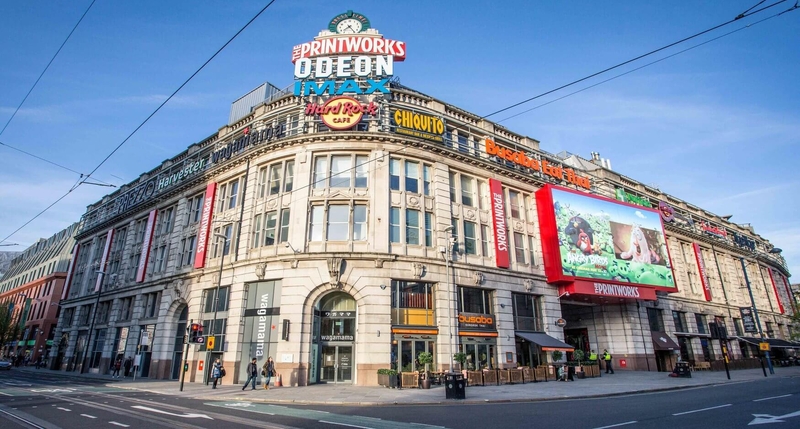