THE vegan food movement has blown up like my belly after a plate of seitan. All of sudden, Greater Manchester doesn’t just have a couple of token vegan cafes on Oldham Street slopping out chickpeas six ways, but a plethora of plant-based joints offering everything from junk food to fine dining. Ingredients previously stamped ‘vegans only’ have started sidling up alongside meat in the edgiest of foodie haunts. Some cocktail menus are even eschewing egg white and cream for aquafaba (that’s whipped-up chickpea juice if you still don’t know) and alternative milk.

A black eyed pea, squash and lemongrass curry made my pal light up like a vegan kid in a fake meat shop

MasterChef contestant Adam Leavy impressed judges with meat dressed up as veg and veg masquerading as meat. After taking the grains from his predecessor Matthew Nutter at the acclaimed Allotment Vegan Eatery in January, Leavy now has a new tofish to fry as the head chef at backstreet botanical boozer Alvarium.

While the NQ is a hotspot for food and drink, Alvarium’s location works against it. Nestled away on a cul-de-sac off Tib Street in what used to be Cord, it doesn’t exactly benefit from passing trade. A bright yellow awning signals you’re in the right place. On the evening we visited, there were brave folks sitting underneath it with their pints as the torrential rain swilled away any memories of the previous evening.

Manchester’s ancient symbol of workaholism clobbers visitors to the city over the head like a dose of hayfever the second they step off the train these days. The city is beginning to look like a distant aunt’s ornament cupboard wherein lies the detritus of umpteen Christmases following a casual mention that she quite liked bees. Alvarium has at least been subtle with its name; a synonym for apiary. The interior is based on a garden, with a whole wall of – disappointingly plastic – greenery, flowers and, yes, bees among other nods to the nation’s favourite hobby.

While the cocktail menu has recently gone full veeg, on our visit my plant-based pal had the choice of about six from the lengthy menu. They were good, if a little sweet, and BOGOF at happy hour, an absolute bargain. But what about the food?

The menu was short but strange. We weren’t sure whether to just order everything as there were only five ‘small plates’ and three sides on offer. The waiter recommended three and then more if we were still hungry. We did as we were told.

A specials board boasted ‘mozzarella’ sticks which our waiter said were ‘just like the real thing’. We were sold. They weren’t. They looked like anaemic homemade fish fingers designed to punish children and were filled with a wallpaper paste that had nothing, nothing in common with mozzarella. Nevertheless, I found them weirdly moreish, especially dipped in a garlicky accompanying sauce. The vegan, who has forgotten what cheese tastes like, loved them but agreed that the texture was lacking.

Alvarium Salad (£7.50), artily presented on a plank, was trying too hard. I love all its components: colourful heritage tomatoes, olives, beetroot, pistachio, but the pistachio was made into some kind of health food halwa and the olives pulverised into a salty and overpowering ‘soil’, and it was served with splinters of crunchy, seeded flatbread that Dr Gillian McKeith would be proud of. I really wanted to love it but it felt like another punishment for virtuosity, and we munched it begrudgingly like children on a promise of dessert if we ate our veggies. Speaking of dessert – my pal had been keen to try the red velvet cake on display but it turned out not to be vegan.

From inedible to incredible, jack a l’orange (£7.50) was three breadcrumbed balls of shredded and perfectly seasoned jackfruit with polka dots of fresh orange sauce, presented on a shitake mushroom base that was chewy, in a good way. I hate to resort to this but, well, it was meaty. We loved this so much that we toyed with ordering another plate of it but resisted this time. Obviously three plates weren’t enough though, so another round of cocktails and dishes it was. My Smoke and Mirrors (£8) cocktail came covered in a carriage-clock cloche to imbue it with smoke. I know it’s been done to death but I do like a bit of theatre with my mixed drink.

A black eyed pea, squash and lemongrass curry (£9) made my pal light up like a vegan kid in a fake meat shop. I hadn’t seen him look so animated since regaling me with tales of the fox hunt he’d sabotaged the weekend before. Full of fragrant flavours and warmth, the vegetables were the star. I have to give Alvarium credit for the lack of fake meat. This kind of vegan cookery is what will win over curious omnivores more than barbecued insoles.

Sweet potato bhaji (£7) was a fine accompaniment. Cut in half to share, it disappeared in nanoseconds and ‘biryani’ base was another highlight. Not rice but a chunkier grain, perhaps bulgur or barley, rippled with pomegranate and parsley and topped with a zingy salsa. Polenta and oregano fries (£3.50) were close cousins of those mozzy sticks, made of actual fried polenta rather than just coated potatoes.

The appointment of Adam Leavy is a big change for Alvarium who have hitherto been known as a cocktail bar with emergency nibbles. The menu has already evolved since my visit – they have added some interesting sounding sarnies – and there are some great dishes here alongside the not so good. The small plates concept needs rethinking as the different sized plates are not all ideal for sharing, but these are minor stumbling blocks. Vegans have another decent place to dine; the rest of us might need a touch more convincing. 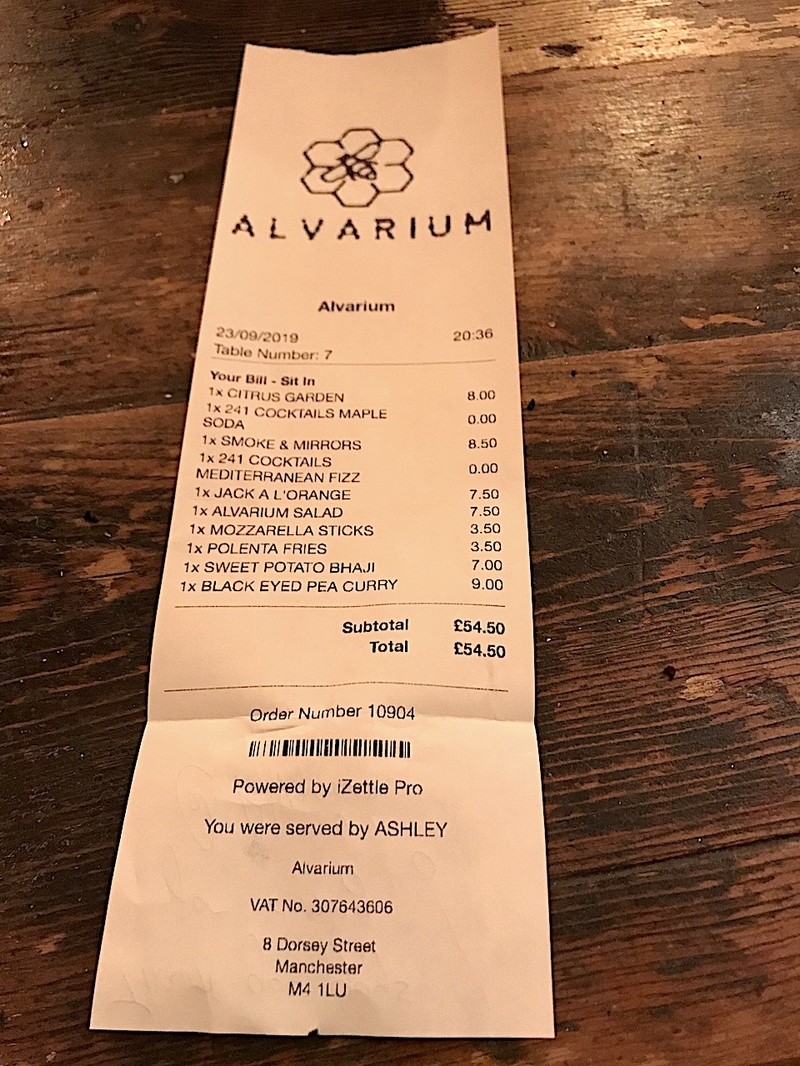