Back To Stories
● / Seafood

A dozen places to eat oysters in Manchester and beyond

Seafood worth shelling out for

We all know the old rule that you should only eat oysters in months with an ‘r’ in them. One of the many reasons for this is the temperature of the water on the coast during the summer months. But anyone who’s dunked their toe in to the murky waters at Blackpool on a sunny day in May would probably feel a little confused by that.

Anyway, we’re leaning in to it here at Confidentials and have been striding confidently through the first month of oyster season leaving a trail of shimmering shells in our wake. Not hard when Manchester seems to be full to the gills with the briny little blighters.

Determined to put paid to the idea that oysters are only for the more bourgeois amongst us, and keen to test out some other rumours we've heard about the flirty molluscs, we’ve shucked out some of the most desirable and affordable oysters in Manchester and beyond for your gobbling pleasure and ours.

Here's our deep dive in to the oysters of Greater Manchester: 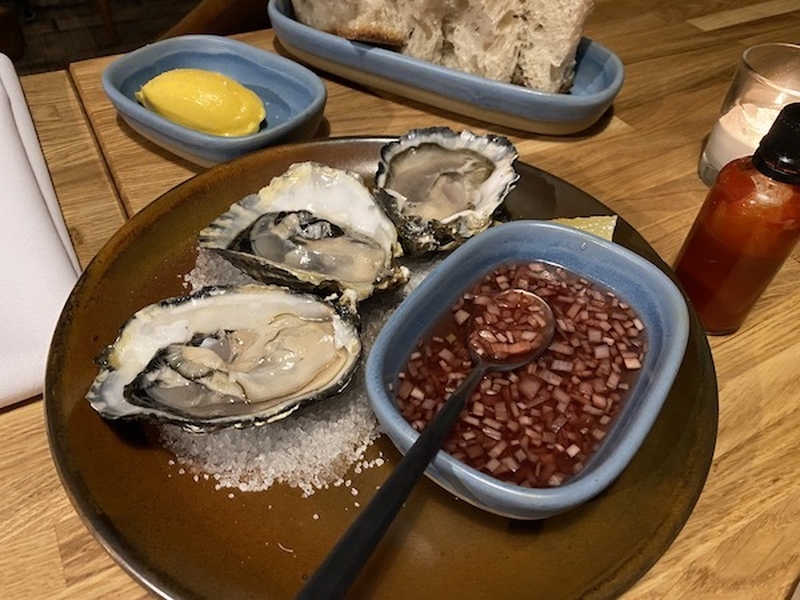 If you’re new to the oyster scene, this is the perfect place to throw your hat into the ring. The contemporary French stylings of the debonair three-storey restaurant 10 Tib Lane, from the team behind Henry C in Chorlton and Northern Quarter ramen joint CBRB, is currently offering an astonishing oyster happy hour with £1 oysters served with £6 cocktails every day 4pm - 6pm. 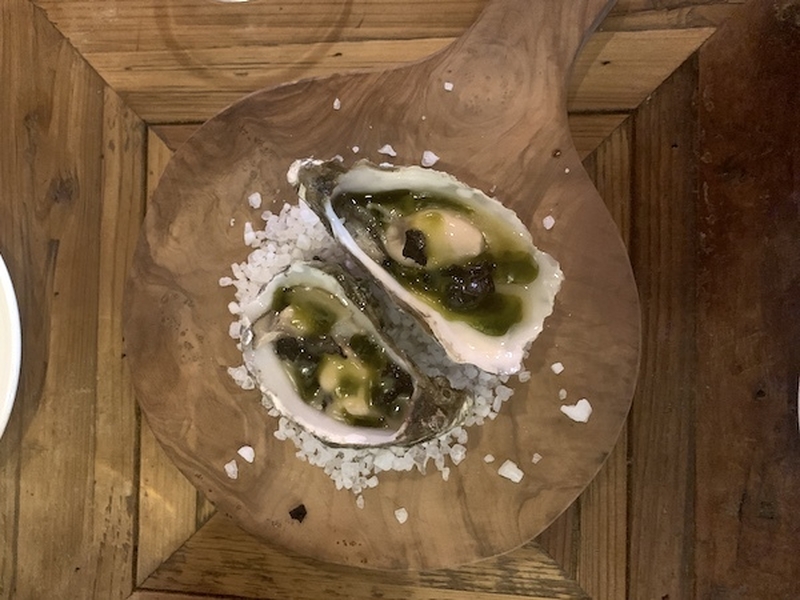 Baratxuri at Escape to Freight Island

With its sister restaurant in Ramsbottom scooping the well-deserved Restaurant of the Year award at this year’s Manchester Food and Drink awards, book in soon if you want to get your bum on a seat near the fire pit at Escape to Freight Island. Pronounced ‘barra-churri’, the Basque-inspired restaurant offers Cumbrian oysters draped in a thin layer of beef fat with cep mushrooms for £4 a pop. Try it, you’ll love it. 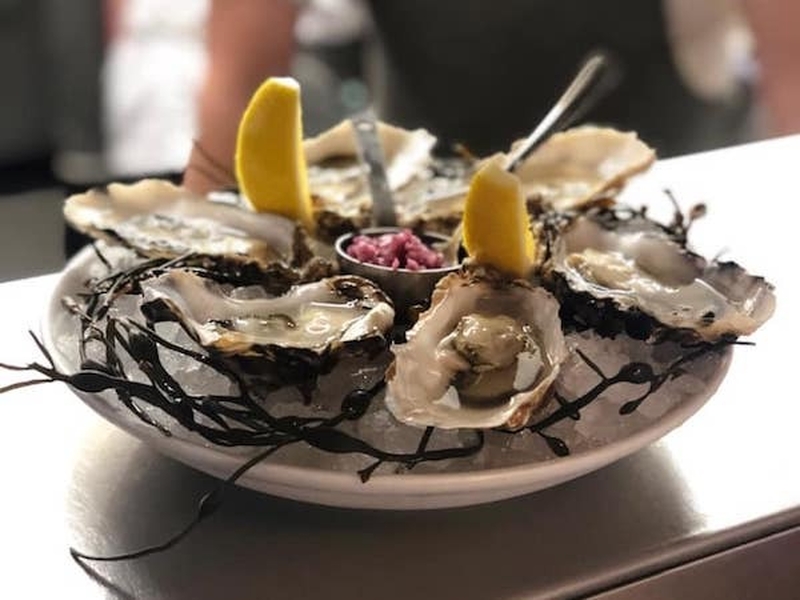 With two restaurants across Greater Manchester, The Easy Fish Co. has come a long way since its roots on the original Smithfield Market in the Northern Quarter. In both the Heaton Moor and Wilmslow restaurants, spanking fresh oysters are available au natural or with shallot and red wine vinegar at £8.25 for three. 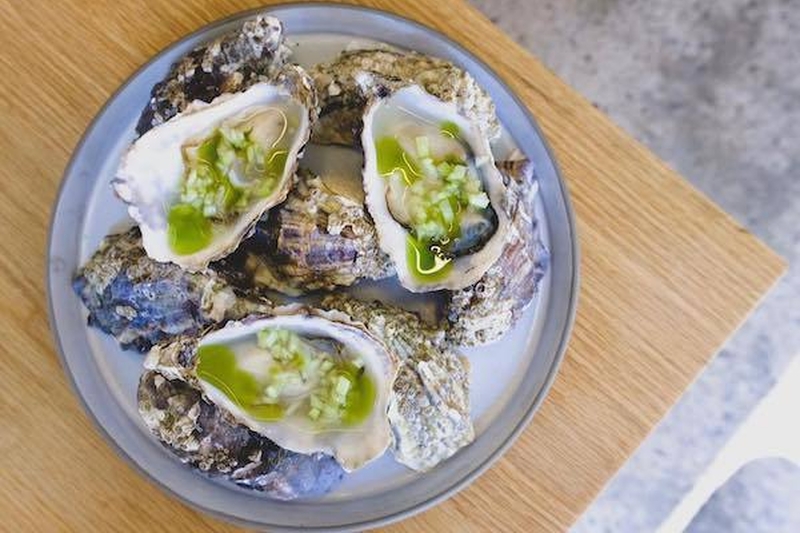 Fans of Erst will know that the menu changes with the tide, so think fast if you want to catch a Carlingford oyster from Jay Rayner’s new fave spot in town. Here you’ll find the classic accompaniment of a mignonette which is essentially a dressing made of chopped shallots, vinegar and black pepper. Apparently, this is a great choice if you’re not completely sold on the texture of our little friends just yet, and for £3 each, we’d say that’s better value than a Boots meal deal. 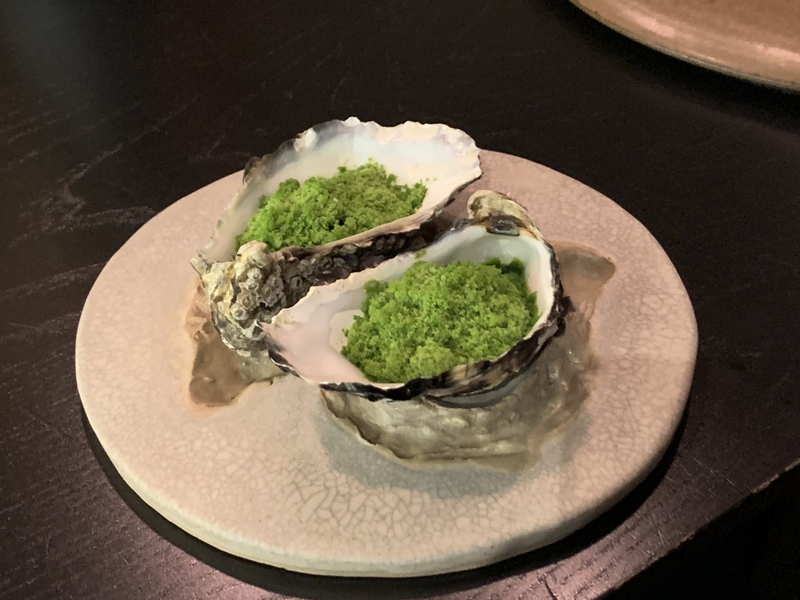 If you like your shellfish with a side of Michelin star, Mana is a pretty good place to start. Currently on Simon Martin and co’s £155 tasting menu, we’re not saying this is the most wallet-friendly oyster in town, but the trimmed oyster from Ireland served with new dill, English wasabi and macerated oyster leaf is part of a 14-course odyssey which, for all intents and purposes, is likely to blow your palate right out of the water. 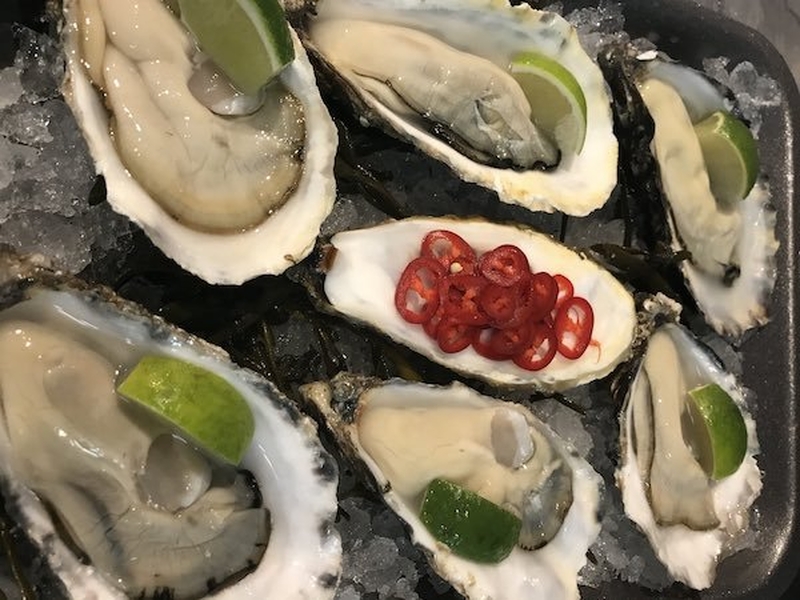 Out of the Blue

If you’re craving an oyster but are in a bit of a rush, the guys at Out of the Blue in Chorlton have your back. A fishmonger rather than a restaurant, they’ll open and dress oysters right behind their counter for you to enjoy as a snack in between picking up your alfalfa sprouts from Unicorn, and your Chorlton sourdough from Barbakan Deli. The perfect slurp on the go.

Out of the Blue 484 Wilbraham Rd, Chorlton, Manchester M21 9AS 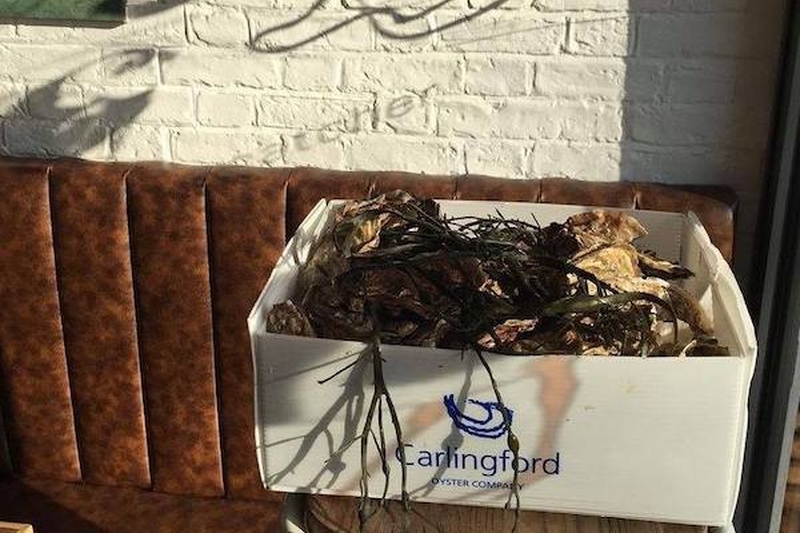 As you might expect, oysters are a speciality of the longstanding Chorlton restaurant with a weekly, seasonal and ever-changing menu. Exactly what you're looking for in a fish and seafood joint. Its large Carlingford oysters are famously meaty with a unique sweet taste and are known as one of nature's real treasures. Enjoy three for £8 with that classic shallot mingionette. 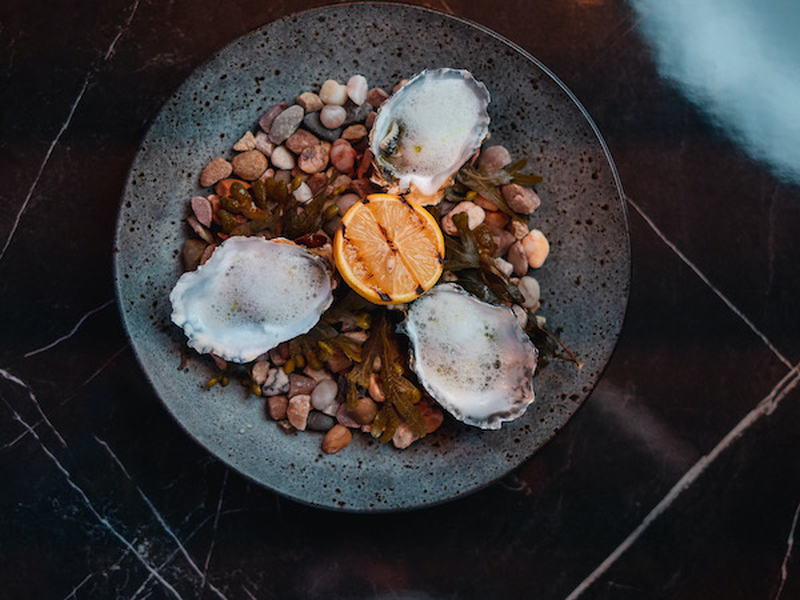 Rendition’s largely locally sourced menu is the work of executive chef Arthur Potts Dawson who used to be head chef at The River Cafe and is known for his work with sustainable farmers and reducing food waste. Oysters are a well known sustainable food source after all, so it would be rude not to give these ones a try. Served with all the classic accoutrements, these native oysters are available at market price in multiples of three, so make sure to bring a gooseberry on your date. 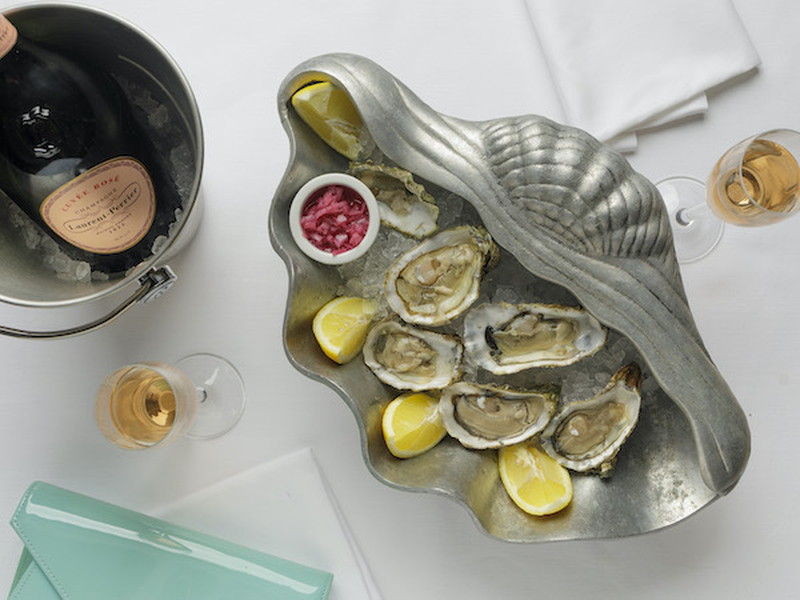 Colchester is world-famous for its oysters which have been grown there since Roman times. This is perhaps why la famiglia at San Carlo insist their oysters come from there. It’s also worth mentioning that they go through oysters so quickly in the restaurant that they don’t have any time to sit around, making San Carlo a great place to try if you’re a nervous oyster virgin. With classic mignonette dressing, they’ll only set you back £12 for six, or £18 for nine. Those celebs aren’t flashing the cash as much as we thought. 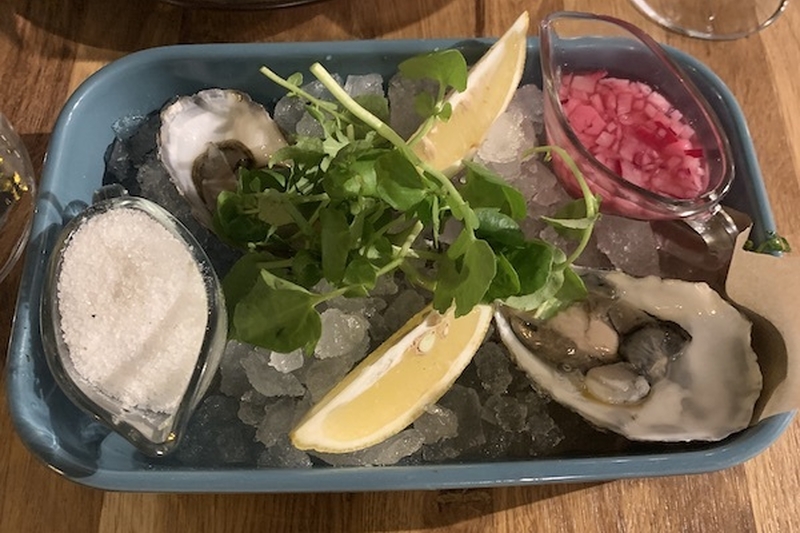 For fresh fish and seafood in Manchester city centre, you can’t go far wrong at Street Urchin right on the border of the Northern Quarter and Ancoats. The menu is presented to you on a blackboard with native Colchester oysters sitting front and centre. At £15 for a platter of six little lovelies with all the classic garnishes, that’s £2.50 each - a right old bargain. 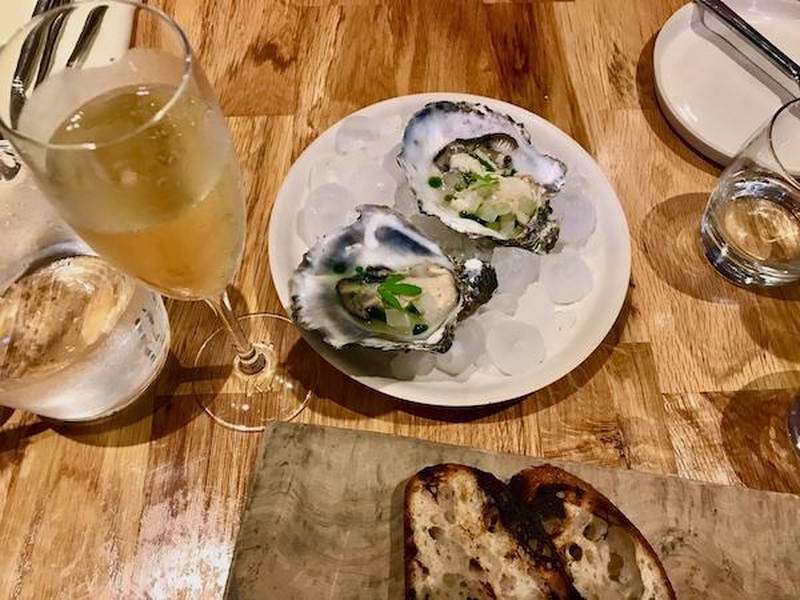 All the cool kids offer seasonal menus now, and The Moor - based in the Heaton from which it bears its name -  is no exception. Our reviewer recommends starting your meal with one of these Isle of Mersea beauties, calling it a “wildly invigorating experience". If you fancy the feeling of wellbeing shooting through your veins faster than an intravenous vitamin drip, then all you’ll need is £4 and a tram ticket. 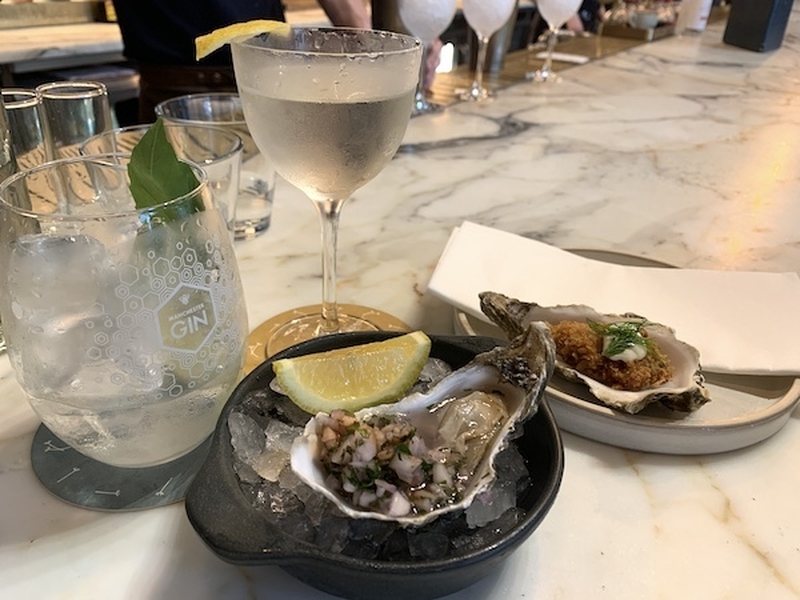 Roommates with Manchester Gin and now bezzos with the guys at mana too, is there a pie the Three Little Words gang don’t have their little fingers in? Well, to celebrate the launch of the new oyster gin created in the Spirit of Manchester Disillery with discarded oyster shells from the mana kitchen, they’re offering free oysters to all and sundry. Choose from a deep-fried Lindisfarne oyster with saltwater mayonnaise or a ‘fresh & classic’ with shallot, fresh lemon, tabasco and crispy onions with every Mother of Pearl Martini (£11) or Mother of Pearl gin and tonic (£9) purchased until the end of October.