Closed 1847 could reopen as a Thai restaurant

And so the churn continues...

In a week of closures with Fika, Grindsmith and Roc & Rye all pulling down the shutters for good, I'm afraid we have news of another.

Just over eighteen months after relocating to a bigger premises, vegetarian and vegan restaurant 1847 has closed its doors on Chapel Walks.

Having originally opened as a cafe in 2010, Bistro 1847 was one of the first of its kind in Manchester. They were trailblazers, offering an entirely vegetarian menu that was fancy enough for a special occasion and challenging preconceptions of what meat-free dining entailed.

While owner Damian Davenport told us back in 2015 that it had been so difficult in the early days that he had spent several months sleeping in the restaurant's store room, the brand went from strength to strength, eventually opening sites in Bristol, Birmingham and Brighton.

It's not all doom and gloom though, as the Birmingham branch will continue operating and the recently wed Damian will be starting a new chapter of his life overseas.

And it seems the new owners aren't wasting anytime, with work inside the premises already underway. Rumour has it that it's going to be an 'authentic Thai restaurant', just across the road from Chaophraya. Sure they'll love that.

Did anyone really use the 'pop-up' cycle lanes on the A56 over lockdown?
● / Dinner 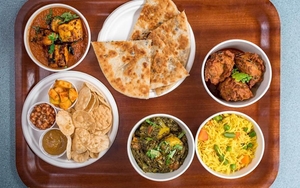