Orange wine with your turkey this year? It’s the future

LIFE was so much simpler when Christmas meant Chateauneuf with the turkey, cream sherry with the mince pies and a supermarket own label Champagne to get you through the Queen’s Speech. Natural wine? You mean ‘not made out of a kit?’ Orange wine? Yuk, have you tried my home-made damson plonk?

It’s a different world now with a wealth of challenging choices but as with craft beer (witness the hazy New England IPA backlash) are we just spoilt for choice and guilty of sacrificing what we truly savour for hipsterish fads?

...it’s surprising how many of the world’s top producers tick biodynamic boxes

In my Christmas picks I’m not aiming so high, just trawling the independent merchants to check out some on-trend styles that the supermarkets, our main wine suppliers, have yet to take on board. Among some I struggled to enjoy I found some delicious examples:

So what does it all mean?

Biodynamic goes further, seeking inspiration from principles developed in the 1920s by Austrian Rudolf Steiner, promoting the use of natural preparations to keep plants healthy but also strictly adhering to the cycles of sun and moon, plus notoriously the burying of cow horns filled with fermented manure to encourage soil fertility.

Natural wine fuels even more controversy, with less regulation, but is defined by indigenous or ‘wild’ yeast, minimal intervention in the wine making, barely any fining or filtration and, worryingly, eschewing the sulphur amounts that preserve wines from infection. Russian roulette meets wine lists with some examples being over funky, shall we say, but if you are into sour beer and rustic cider, perhaps your bag. Reserve wines retail shelves at the Mackie Mayor even have a Natural Wines section.

Orange wine is nothing to do with the fruit – just the colour, a half way house between red and white, but a world away from rosé. It’s made from white wine grapes that have spent maceration time in contact with the skins – the traditional way of making reds. Armenia and Georgia are its traditional homes, more recently Friuli in Italy, but production and popularity of this savoury food-friendly style are spreading.

Ideally my sparkler recommendation would be from Ancre Hills, a biodynamic winery just outside Monmouth, whose first vines were planted a decade ago. We tasted their rosé on a summer review trip to Forest Side in The Lakes and were blown away. I’ve striven in vain to find a local supplier; generally it sells out swiftly just in Wales.

Still, festive consolation with this classic from Fleury, who have been flying the flag for organically produced Champagne since 1970 (it went biodynamic in 1989). This is 100 per cent Pinot Noir, full of plum and raspberry with a subtle creaminess. Buy it direct from Vintage Roots or check out if it’s in stock at our own organic stalwart, On The Eighth Day on Oxford Road.

Both my biodynamic whites are from maverick producers in France’s two most classic wine regions. At Chateau Bel Olivier Cazenave stands apart from standard Bordeaux practices; result in this blend of 70 per cent Muscadelle and 30 per cent Sauvignon Blanc is a remarkable purity of peachy fruit.

The grapes come from a walled vineyard dating back to the 13th century, which is still ploughed by horse. This ‘monopole’ site is unique in Chablis as is the wine made by chatelaine Athénaïs de Béru. This vintage is described by Anson as “tense on the attack… you are gripped by the drama of slate and flint-infused lemon.” Wonderful stuff with beautifully integrated oak; Buon Vino, Settle-based biodynamic specialists have a limited amount left.

Almost scrumpylike, this orange interpretation of Sicily’s indigenous Catarratto grape is made with three days maceration on skins, creating a bronze wine reeking and tasting of apple and plum. 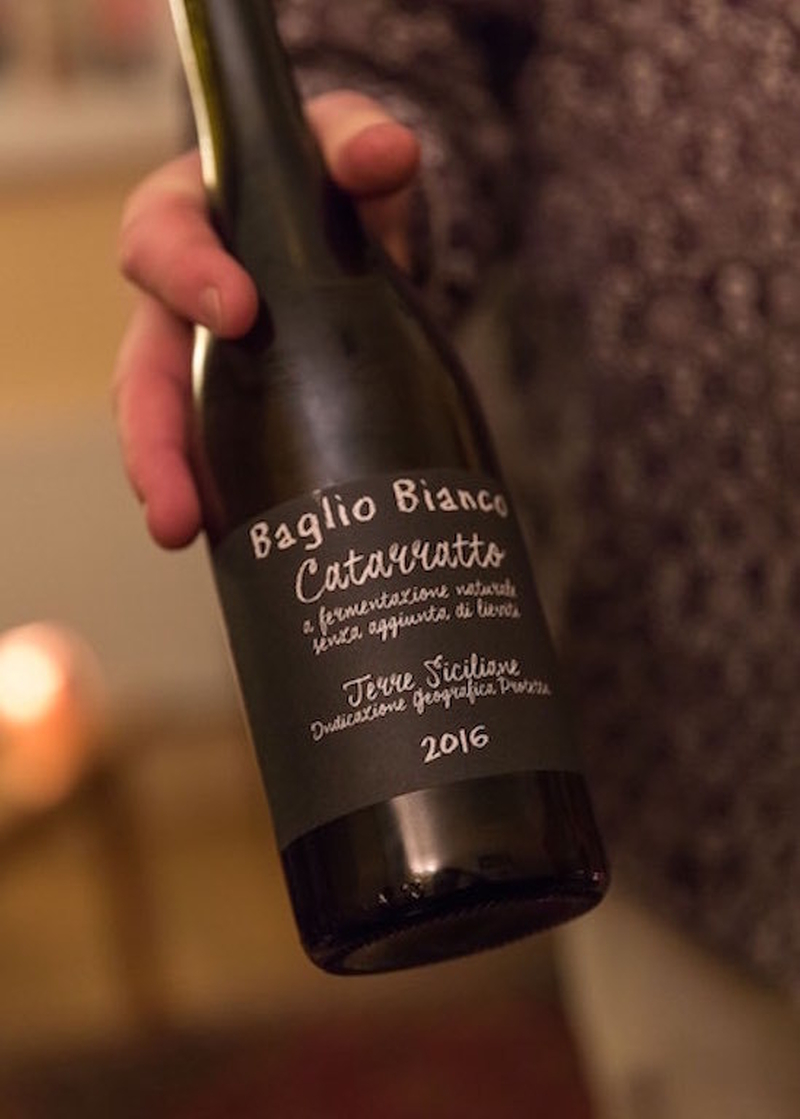 This fine entry level orange comes from its Georgian homeland and is partly matured in clay amphorae. Spicy, quince nuanced with a hint of sherry about it.

You won’t miss this Austrian orange on the shelves with its Space Invaders homage label; the contents are made from workhorse grape Müller Thurgau, left on the skins for weeks. I enjoyed its mineral aromas and gently spicy fruit. Both it and the more strident Kloster Ebernach Experimental Orange Riesling 2014 (£25.50 again retail price) are on Salut’s Enomatic machine throughout the festive period.

This Surrey orange is made from 100% hand harvested Bacchus fermented and aged on skins before pressing into French oak barriques for a further nine months before bottling. It taste as serious as it sounds, straw golden, nutty on the nose, mineral on the palate, finishing long. Leave it a couple of years to open out. Lovely.

Another head-turning label, this time of a tippler shoving grapes down his throat, which almost mirrors the curranty gamay flavours of the wine with its whack of liquorice on the finish. Uncomplicated then; serve it chilled. 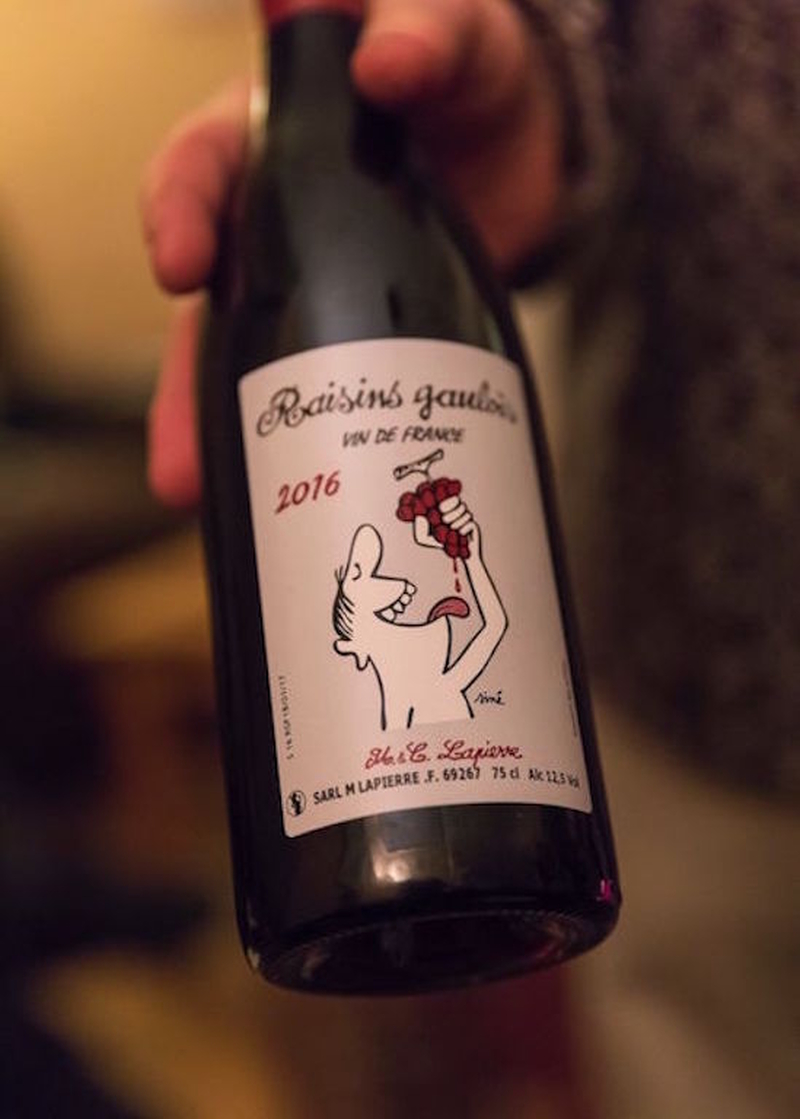 Another thrillingly talented female winemaker to the fore here, Arianna Occhipinti, with a wine named after the road that passes her Sicilian vineyard.Her blend of Frappato and Nero d’Avola is one of my favourite reds. I love its scents of raspberry and cherry and silky, spice-rich palate seamed with refreshing acidity. 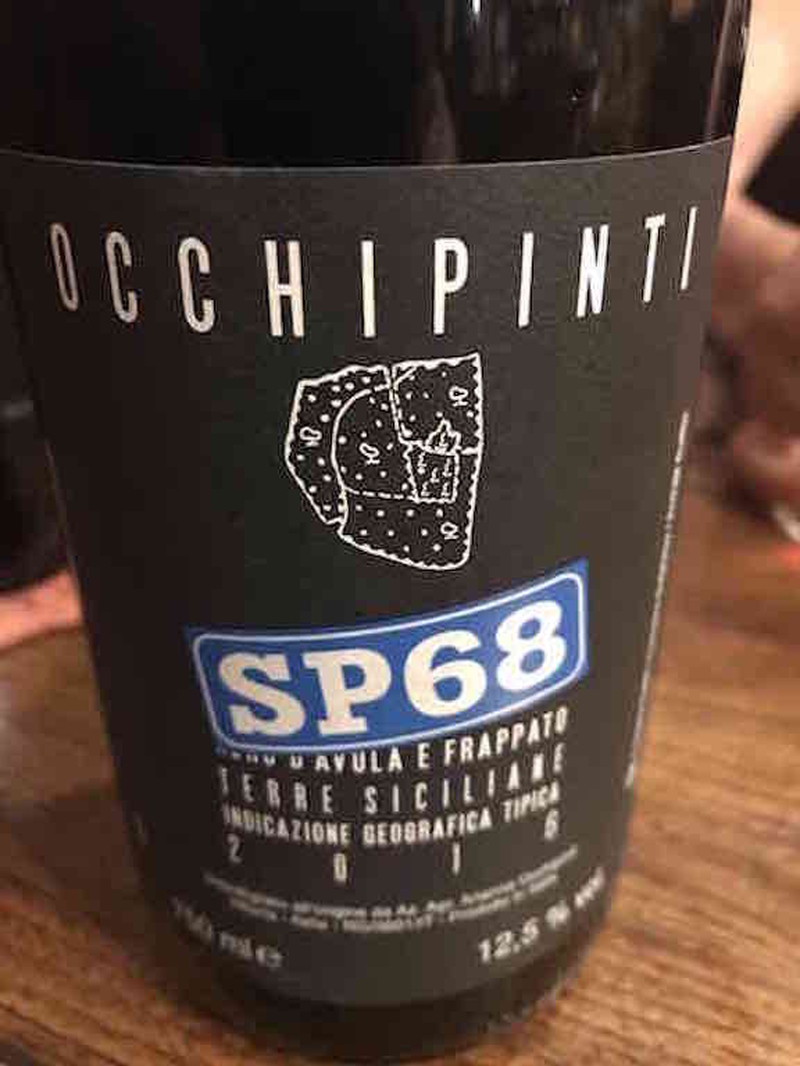 Like all these reds, low in alcohol (12%), in contrast to its sturdy South Australian peers, this unfiltered blend of separately picked and fermented (using wild yeasts) Syrah, Tempranillo, Mourvedre and Grenache wa aged in ceramic egg and old oak. The resulting wine offers a remarkable purity and crunching tartness. A food wine but a good ‘un.

Not quite as exotic, but this entry level red from a great Roussillon organic champion will provide a more conventional accompaniment to turkey (though at ours it’s finding a perfect pairing wit venison rack thus Yule). All this Southern French garrigue (wild herb) flavours spill out in a this benchmark blend of of Syrah, Grenache and Carignan.

Finally, not a particular bottle but a reminder of the iconic status of this Lebanese producer. Its owner Serge Hochar took the bold decision in 2005 to be certified organic, having striven to be as traditional and non-interventionist as possible in both vineyard and winery. Serge died last year but the family continue his Bekaa Valley legacy. As his son Marc says: “Musar escaped the winds of modern winemaking.” Jane Anson describes the result as “Exotic and enticing, both floral and spicy, it curls out of the bottle before even being poured into a glass”. See for yourself.

The likes of Reserve Wines, West Didsbury and D. Byrne of Clitheroe https://dbyrne-finewines.co.uk may stock older vintages (it improves with bottle age). To accompany turkey and Musar buy a new book profiling Serge and his wines. Chateau Musar by Kevin Gould costs £15.99 from our own Manchester Books. www.mcrbooks.co.uk