'Not a crushed velvet swag in sight' - 10 Tib Lane, reviewed

It’s how we feel about the relaxed procession of Gallic-inspired small plates materialising at our first-floor table in 10 Tib Lane. Scintillatingly fresh veggie combos segueing into cannily seasoned lamb and iberico servings.

The pace gives us time to savour a vin rouge that is, appropriately enough, an homage to big bollocks. The label of Les Couilles d’Anes 2018 (£38) replicates the unusual black stones from its Touraine terroir that are affectionately named after a donkey’s parts.

All under the eccentric stewardship of Kit, he of the pink kilt.

Since then, all Lounge Ten’s over-the-top fittings ripped out, it has been in turn industrial neon burger joint Filthy Cow and until last November cosy Belgian ale lair Bøck Bière Café.

Now it’s back as something else and it really is something else on the first encounter. To fully gauge whether 10 Tib Lane is the significant addition it appears may require further expeditions. Our concentration on the food meant ignoring the cocktail menu. That wasn’t the case with certain members of the city’s spirits royalty propping up the downstairs bar tended by Joe White of Henry C fame.

10 Tib Lane is a joint venture between that Chorlton bar and the Northern Quarter’s Cocktail Beer Ramen + Bun team. Quite a pedigree, so you’d expect the drinks offering to be progressive and ultra tempting. My name next time is on a High Tide (Havana 7 year rum, Pierre Ferrands Dry Curacao, Cacao, Lime, Pistachio and Cardamom Orgeat). This time my need is for a hoppy palate cleanser. Pomona Island and Track represent Manchester beer but I go for the exotic – from Mold in North Wales – a can of Polly’s Dream Mate Galaxy IPA (£8.90). That’s Galaxy the cult hop, not the choccie. Tropical, dank, pulpy and craft, you get my drift.

Wine follows the trend for "low intervention", that millennials’ badge of grapiness. Our Loire red is from one of the most reliable natural wine suppliers, Wayward Wines of Leeds, for whom drinkability is as important as proselytising. Mikaël Bouges only makes around 1000 bottles from this one site of 100 per cent Côt (local name for Malbec) grapes. It’s a vibrant dark fruit charmer and the restaurant mark-up is modest, which endears me to 10TL even further.

I like their website mission statement: “Natural wine that doesn’t scare you off, cocktails without fuss, beer that matters and food that showcases the best produce we can get our hands on.” It’s as unfussy as the re-fit which has utterly transformed downstairs while retaining the state of shabby chic across the upper floors. Not a crushed velvet swag in sight.

The influence of produce supplier Cinderwood Market Garden is evident in the first four dishes that arrive. This one-acre Cheshire market garden, dedicated to regenerative farming methods and organic principles, is the pet project of grower Michael Fitzsimmons and chef Joseph Otway, the driving force of the Higher Ground pop-up (watch out for their imminent New Islington natural wine bar Flawd).

We reject a dish called Cinderwood courgettes because our own raised beds’ 20kg glut has sapped our appetite for them. Instead, we start with an instant signature dish – a vegan potato and chive financier (£6.50) with ginger and sweet potato aligot. Sticking to Larousse Gastronomique first principles, a financier is a small French almond cake, gamine cousin of the madeleine. On this menu, it’s a delicate potato cake. Aligot is a speciality of France’s Occitanie region, overload of cheese in a whipped spud; 10TL’s non-dairy sweet potato variant is an inspired touch.

If snacking with a drink after work is your priority, it will hit the spot. Ditto the devilled crab (£8) with a kick on sourdough toast, the only seafood on the debut menu, oysters apart. Not that we’re complaining when it comes up with an assembly of artichoke, hazelnut, watercress and mint, held together by an oat creme fraiche (£6).

Equally striking is a further vegan-friendly dish where heritage beetroot (£7) really is king, carrot swirls as its courtiers, dressed classically in walnut oil with a more leftfield pesto of hazelnut and sorrel. Oh and an intriguing bitterness from tiny samphire-like shoots of monk’s beard. Its spiritual home is in the Tuscan marshlands and now, we presume near Nantwich, too, at Cinderwood.

Prettiest dish, and perhaps too gentle, is four lengths of baby leek (£8) on a bed of tomato essence, hidden by trompette mushrooms and micro-leaves.

More assertive are the two meat dishes. Black garlic, deep-fried sage and charred Tropea onions from Calabria are powerful Med flavours that are an ace match for two chunks of Iberico pork (£12.50). Saffron aioli does the same for lamb rump (£12) with some salty rostis, braised broad beans and cavolo nero the contrasting green stuff.

Both plates are very Alex Shaw, the experienced chef entrusted with what’s bound to be a seasonally changing menu. The exactitude to his meat cooking has always been his forte but the delicate vegan plates are a revelation.

A quiet, consummate pro, he has had health issues and hasn’t settled anywhere for long since his annus mirabilis of 2015 when he was Chef of the Year at the Manchester Food and Drink Awards for his work at Volta, which also scooped Restaurant of the Year at the City Life Awards. This could again be his moment.

Not that 10 Tib Lane conveys the impression it is pulsing with awards ambitions. It does immediately, though, feel settled in its own skin, a triumph in itself for a newcomer in 2021. With this team in charge, it was never likely to be a balls-up. 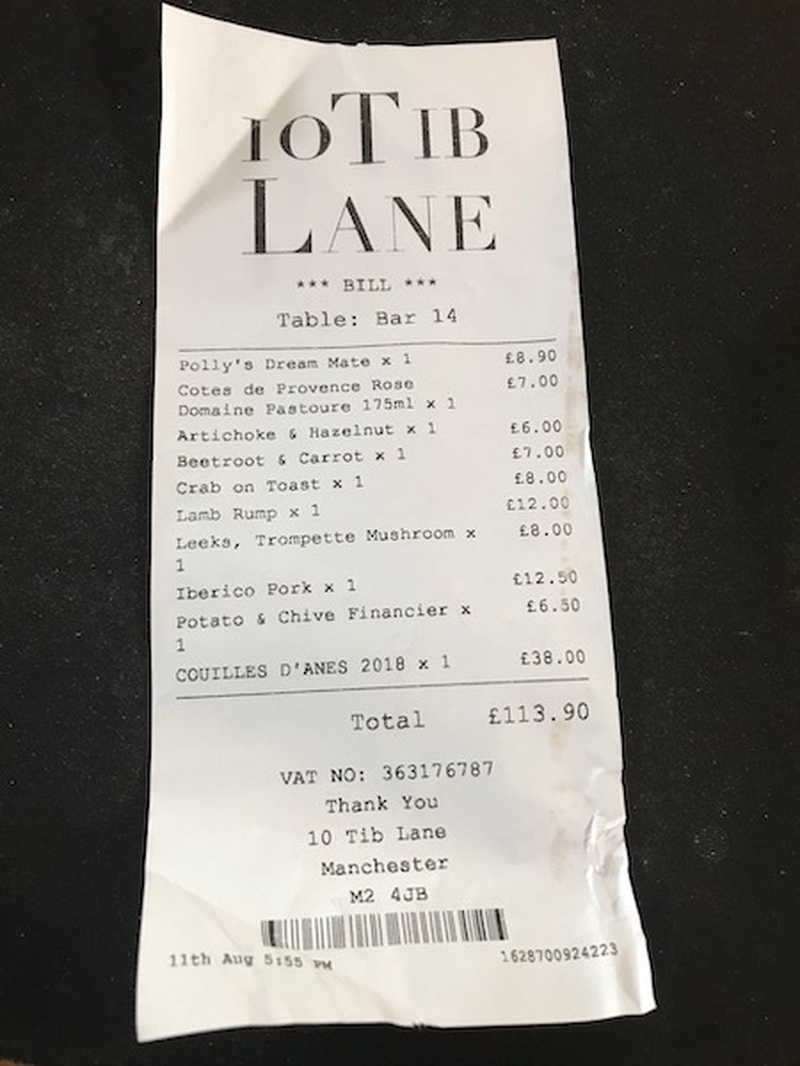