‘A shining example of all that is good’ - Yakumama Cantina and Bar, Todmorden, reviewed

‘Yukamama’ sounded like what my kids murmured under their breath when I told them I was dragging them to a vegetarian Latin American restaurant in Todmorden. But they came round in the end, because Yakumama is excellent.

Many will be familiar with Yakumama’s award winning food and the folk behind it, Hannah and Marcelo, who have been on the street food circuit for a while, catering for weddings, festivals and pop ups.

In the hands of someone who knows what they’re doing, vegans are having a right laugh

I’ve never had the pleasure, but think I once saw them pop up in Liverpool’s Botanical Garden, which shows the extent of their northern reach. This new solid base is the result of a successful crowdfunding campaign, where 377 supporters pledged £17,798 to help get them settled into a permanent space.

Yakumama have chosen a different path to contemporaries Holy Crab and Blue Caribou, who have both recently set up stall in the Arndale Market. But what they’ll have in city centre footfall, Todmorden makes up for by way of views, soul, community and the fact that they have managed to bag an absolute gem of a space in the old Co-op building.

Crowdfunding helped finance a refurbishment of the ground floor. As well as the backstage basics, they’ve given it a paint job, a new floor and have installed a bar area and an open kitchen on either side of the grand curved staircase. The original frontage remains, with its ornate enamelled blue and gold signage and stunning window frames. They’ve only been open a month or so, so need time to bed in and make it cosier, fill the empty shelves and let the plants grow.

Todmorden is a shining example of all that is good about humanity. During our visit, there was a gathering of kind-faced people upstairs for the Pushing up Daisies Festival, there to explore death, dying and bereavement in a positive way through talks and workshops. The kind of stuff most people brush under the carpet, but they should really be teaching in schools.

Todmorden brings Yakumama even closer to their wonderful vegetable suppliers, so there’s minimal time between pulling up the veg and putting it down on the plates.  It’s no coincidence that Incredible Edible, the inspiring project that volunteers to turn underused public spaces into abundant growing grounds, started here.

Growers and producers are proudly name-checked on the menu such as ‘Andy The Crumbly Cheese man in Tod Market’ who supplied the ‘smoky creamy Lancashire’ for the croquetas with quinoa and spring onion (£7) whose fresh-from-the-fryer warmth perfectly cooled by a creamy garlic aioli.

The menu is compact enough to be able to order one of each small plate, but first, you must try a cocktail, as Yakumama put as much effort into drinks as they do food. This includes a fine range of draught beer, so it may be best to ditch the car.

Pisco is a Peruvian Brandy spirit, which is then mixed with plenty of lime, egg white and a touch of Moondog Latin bitters to make Pisco Sour (£7.50). It was like liquid citrus sherbet, with a kick strong enough to knock me unconscious on the sofa later that afternoon. I reckon they’re so named because drinking too many will indeed make your piss go very sour.

Padron peppers with chipotle salt (£3.50) are anyone’s ideal one-of-your-five-a-day, low carb, vegan, bar snacks of choice. Patacones (£6) - plantain fritters with guacamole, pico de gallo and crispy corn, were a bit of a revelation. I’ve never been a fan of this usually deep-fried, savoury banana, but they make great patties and proved that in the hands of someone who knows what they’re doing, vegans are having a right laugh.

Beetroot, feta, hazelnuts (£7) was a purple pantone reference with various shades of the root either baked in wedges or shaved raw - a pimped up version of a classic combination (although our ‘hazelnuts’ were actually almonds.) Variegated lemon balm leaves were a simple, original way to add a citrusy edge to lift the whole thing.

Todmorden stick garlic was fantastic braised in soy and sesame (£7) – a nod to the hugely positive cultural impact Japan has had on South America after a century or so of mass immigration. Combined with chipotle roast tomatoes, crispy kale and a sprinkling of farofa crumb it was the excellent result of some sturdy and deep-flavoured cooking prep. Not sure if you're supposed to, but we even ate the hairy roots.

Andean fried potatoes (£7.50) with creamy aioli, charred peppers, black olives and an egg added a bit of much needed carb-fuelled heft after all that virtuous vegetation.

We went when Yakumama were serving their initial launch menu and have since discovered that it didn’t include several of their signature dishes, which are well worth a return trip.

Yakumama is a treat for the body, mind and soul. Local produce isn’t just a buzzword. Their menu evolves to reflect ingredients at their best and treated with respect, creativity and experience to get the absolute best from them. We’re lucky to have somewhere like it. 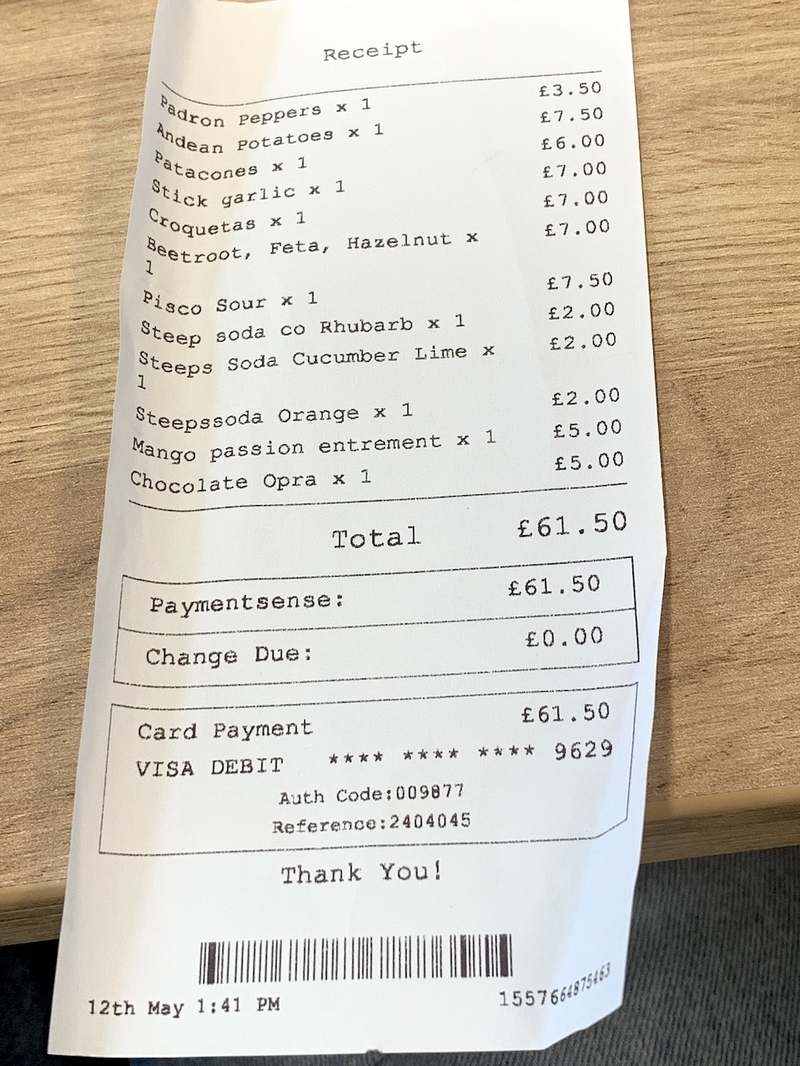