Fleet Street was starting to pack its bags. Looking east to Wapping and Canary Wharf. Scrapping hot metal, bolshie printers and journo’s lunches that stretched forever. Why, even women were now allowed to be served at the bar in El Vino’s. Lunchtime O’Booze sat sobbing into his house Rioja in this vintage wine bar, sherry barrels stacked behind the counter, as if Falstaff were about to drop in for a tankard. I remember it hazily from my own apprentice years in the profession (journalism, that is).

On the way upstairs there’s a wild boar’s head. The boar has no name – I suggested Walloper. There may be a competition to christen the beast

Wine bars, oh yes. Like The Likely Lads, whatever happened to them? Well, they are back in fashion big time and not just in the capital.

Manchester is paying its own contemporary homage. Salut is already a huge success in the self-styled Cooper Street Quarter, Spirited Wines on Deansgate is creating its own bar and now there’s newly launched Wine and Wallop in Lapwing Lane, West Didsbury, which I visited a day too early and kept falling over wine cases and builders. It oozes potential – and the juice of the grape is in its pores.

Of course, unlike Sade and shoulder pads, wine bars never went away, some might argue. El Vino’s is still there, lubricating the legal trade now the hacks have evaporated. More significantly, the Cork and Bottle also survives. Founded off Leicester Square by Kiwi Don Hewitson in 1972, it is by common consent the wellspring of the modern wine bar. Not far away is its hip Noughties love child, Terroirs, promulgating the delights (cloudy horrors, I say) of 'natural wine'. 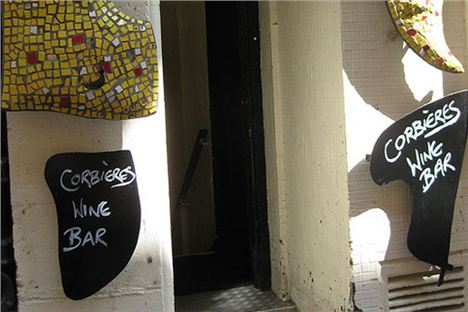 From the the paleolithic era Manchester does boast Corbieres Wine Cavern, but this cellar hideaway gets name-checked more for its legendary juke box than the quality of its vintages. A more recent arrival, Epernay, is most definitely a champagne bar.

Wine and Wallop wants to be different. Creator Justin Parkinson has a crush on the whole concept of a cosy escape where you can sample interesting wine, accompanied by choice deli nibbles. That was the original merchants’ game plan for wine bars before most transmuted into quasi restaurants in the Nineties.

Justin laments the loss of the perfect local example, The Nose, just along from both his new venture and his established Folk bar in Burton Road. Sadly its simple surroundings and uncomplicated formula of vino, tapenade and cheeseboard gave way to first Assembly and now Piccolino’s.

The latter serves wine, of course, as do other chains such as All Bar One and Slug and Lettuce; as do the cocktail lounges, the American barbecue joints, indeed all the quirky indie bars of Burton Road and Chorlton, including Folk. But they are not a WINE BAR. Wine and Wallop is going to be one, insists its creator (pictured below, in reflective mood). 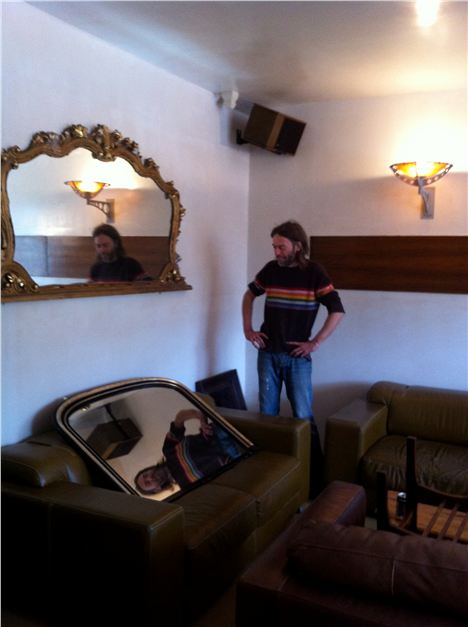 That’s despite the ranks of thirteen handpumps for cask ale, Justin? Of course. Wallop is slang for ale. That’s just another enthusiasm – from his Brummie youth. "I've always wanted to offer a great list of wines and prosecco by the glass, and having tried over the years, conclude that Folk is not the place to do that. We are also featuring a large selection of micro-brewed ales and cask ciders. Something else I remember from the 1980s is that I used to visit a really good off-licence in Moseley, Birmingham, and fill a flagon with such brews."

The presence of Marble's Dobber, Brightside's Manchester Skyline and Elland's remarkable 1872 Porter on the pump clips sends out a powerful, hoppy message, but it is the wines that still take centre stage, sourced from outstanding suppliers such as Hallgarten Druitt and Gerard Seel. 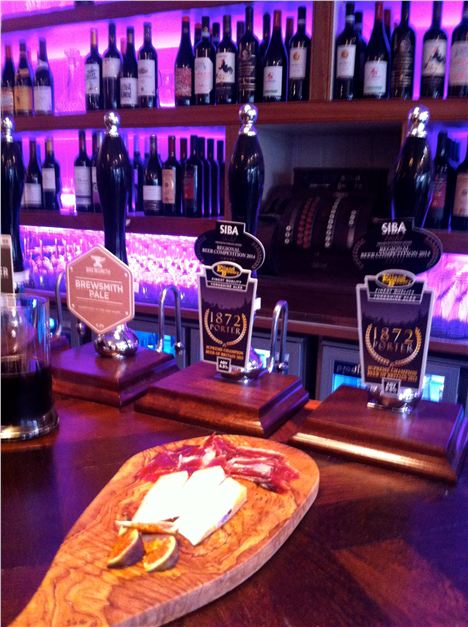 Perect Porter and a board of Jamon

The bar’s 'Wine Flights' will feature five 125ml glasses of wine all with a theme. The small measure is deliberately encouraging exploration of off-the-beaten track bottles and all bottles can be bought to take away. Similarly with the beer. There’ll be flights and four-pint carry-out containers. 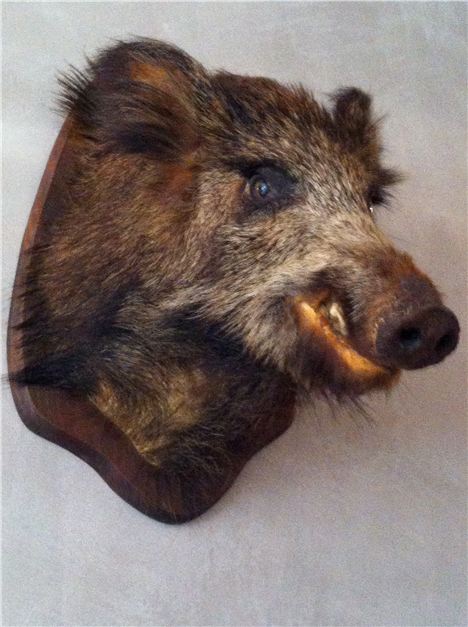 The whole operation stretches over three storeys, culminating in a six metre high, vaulted private function room at the top, featuring a huge disco ball. They had to take the window out to hoist this monster in. On the way upstairs there’s a wild boar’s head. The boar has no name – I suggested Walloper. There may be a competition to christen the beast. 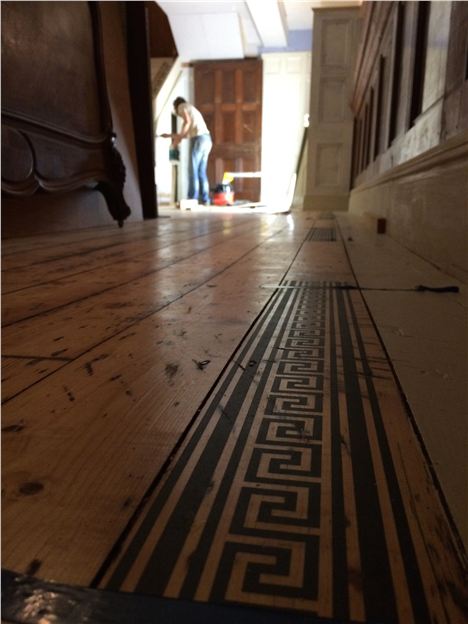 Justin’s design background (Lead Station, Lime Tree) shows throughout. Key features include 300-year-old Canadian pine walling, up-cycled lights from old factories and Blackpool illuminations and a bar top made out of reclaimed panga-panga flooring. Outside what strikes you is the gable end artwork created by Mark Jermun from Salford-based screen printers one69A, whose work features on floor borders inside.

Finally, a major plus. The bar, in the old Blockbuster Video premises, is straight across the road from West Didsbury Metrolink station. Just mind the traffic, Mr O’Booze. 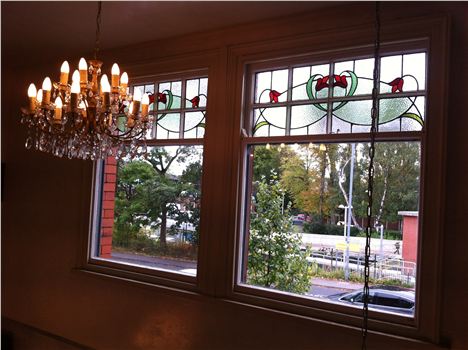 Metrolink is just across the road; below, mind that Mirrorball 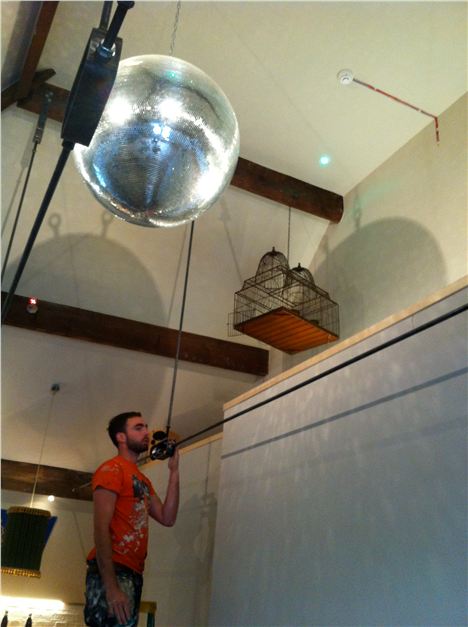 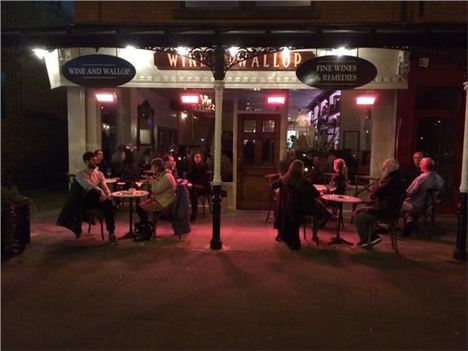 Wine and Wallop by night – in the Lapwing Lane Arcade