Key to this vision was recognition of the role that the city’s Metrolink tram network has played in regenerating vast areas of the city, whilst creating a more robust and cohesive urban region.

TfGM and the GMCA want to build on this success by more than doubling the network from its present-day size, reaching more GM boroughs, communities and regeneration opportunities.

Over 110,000 people use Metrolink per day, over double the amount ten years ago. The network has spent the last decade aggressively expanding and now serves 57 more stations than in 2009.

However, there are still three GM boroughs that Metrolink doesn’t serve: Bolton, Stockport and Wigan – as well as countless other communities both within these boroughs and even within the seven boroughs Metrolink already serves.

TfGM believes the solution lies in a technology which is relatively new to the UK. Tram-trains have the ability to run on the street as a tram, or on the rail network as a train, sharing the tracks with ordinary trains.

By running tram-trains on Manchester’s suburban rail branches, before diverting them to run on the streets before they reach the congested city centre rail network, TfGM hopes to kill two birds with one stone and be able to run more rail services to the city’s suburban stations; as well as relieving tracks in the city centre for conventional trains as well.

Six new tram stops are due to open in the ‘first wave’, due to be completed next year, when the line to the Trafford Centre opens.

Following this, TfGM has outlined a plan to deliver three new ‘trial’ lines which will be used to test the viability of tram-trains on Greater Manchester’s rail network. The first of these will run between Rochdale and Heywood, sharing tracks with the National Rail network to Castleton and then East Lancashire Railway tracks into Heywood. This would give Heywood a connection to the Metrolink network which could be extended further to Bury in the future.

A second trial extension is planned linking Manchester Airport and Wilmslow, which would be the first Metrolink line to leave the GM boundary, and the third tram-train trial is proposed as a short extension of the Altrincham line to Hale.

The next wave of expansion would be similar in scope and ambition to the expansion the network has witnessed since 2008. TfGM is proposing to take certain suburban railway lines out of Northern Rail’s hands and operate them as Metrolink instead in a bid to improve the quality, frequency and reliability of railway corridors.

The first candidates for conversion are likely to be the Glossop and Marple/Rose Hill branches to the east of the city. All stations would be converted to Metrolink and refurbished, with two new stations proposed on the Glossop line at Dewsnap Lane and Gamesley. These lines would connect to the city centre tram tracks via a new chord running from Ashburys to Piccadilly station.

TfGM also plan to convert the Wigan via Atherton and Warrington via Urmston lines to Metrolink, with a new tram line proposed down Chapel Street and into St Peter’s Square, probably via Quay Street.

This kind of investment would undoubtedly stir up property development in Salford and Trafford even more and spread the city centre further west. A new link between Salford Crescent and MediaCity is planned, as well as new rail stations at Little Hulton and Dobb Brow near Westhoughton.

Stockport will become a second Metrolink hub under the plans, with direct services to Altrincham, Manchester Airport and central Manchester via Didsbury planned. A new underground station at Manchester Airport Terminal Two is proposed, alongside the potential to expand the tram network to Port Salford and Salford Stadium in the west, Stalybridge in the east and Middleton in the north.

But with the city centre tram tracks already at capacity, TfGM states there could be a need for a railway tunnel under the city centre linking Cornbrook and Piccadilly, enabling more trams/trains to run east-west across the city.

The proposals outlined have the potential to increase the number of Metrolink stations from 93 today to 198 by 2040, serving significantly more communities and making Metrolink one of Europe’s largest tram networks.

The only GM borough which still won’t be served by Metrolink under the plans will be Bolton. 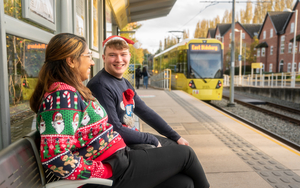 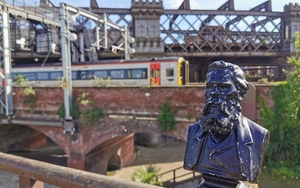