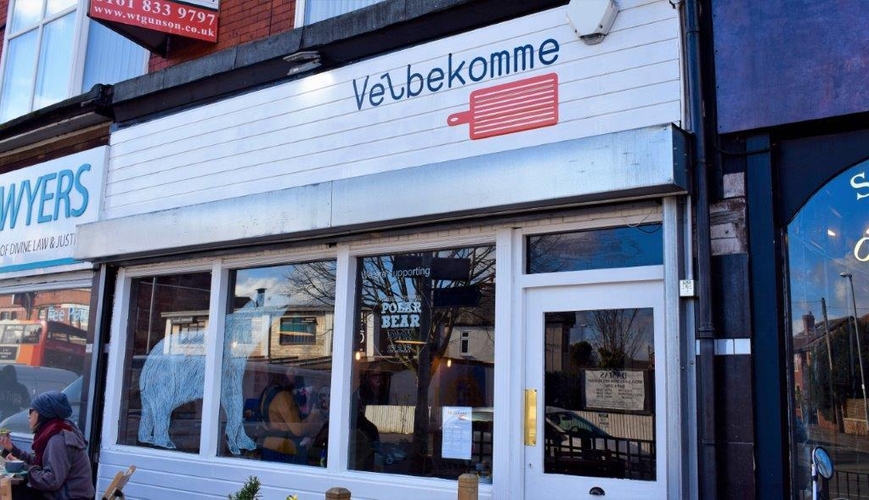 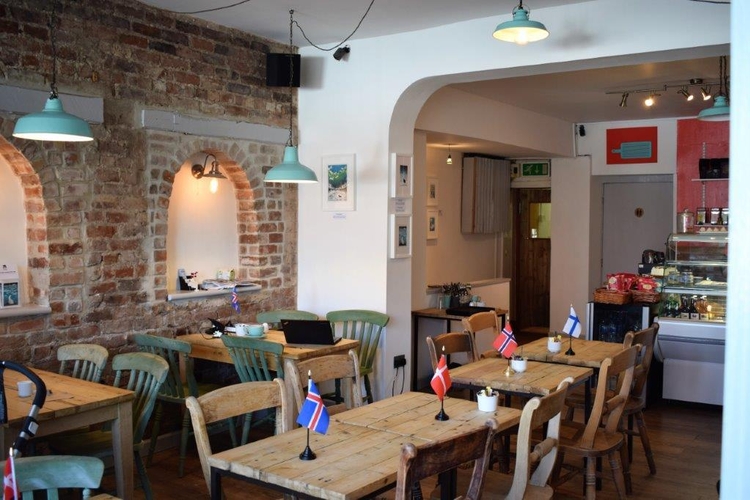 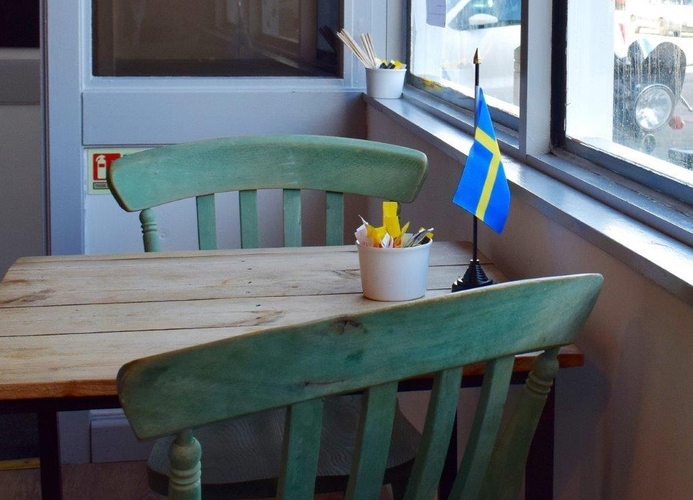 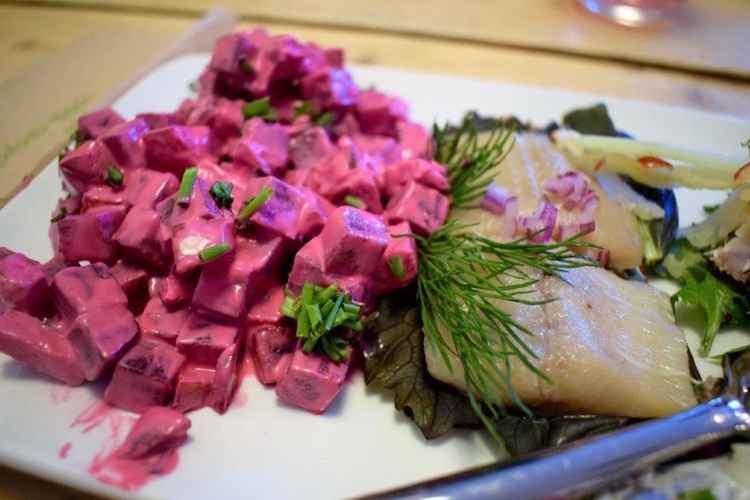 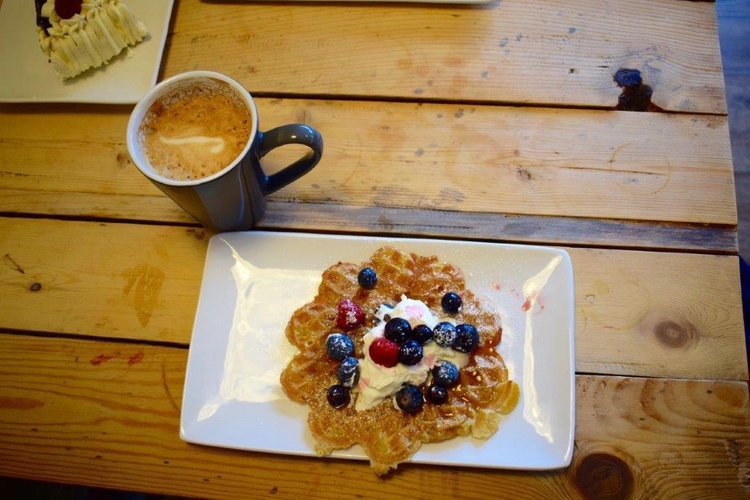 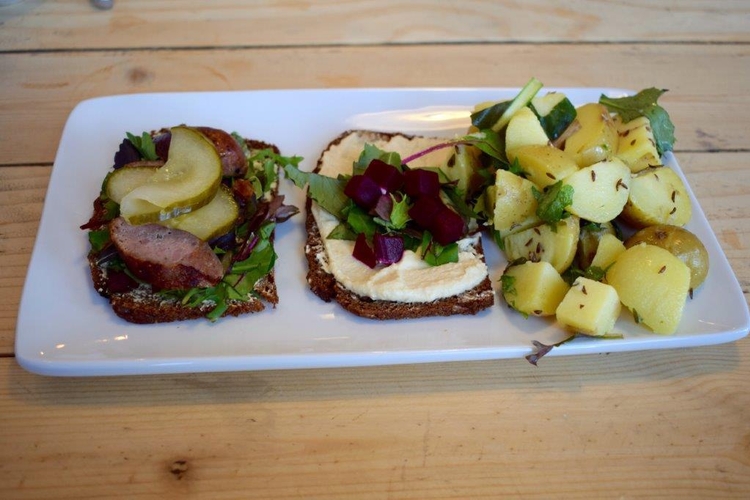 The inevitable has happened...Scandiwegia has made its way to Chorlton

Circa 2014 Nordic style was the food trend du jour. From nibbling on lichen to downing aquavit and pickled skyr, the foragers at Noma (the Copenhagen restaurant that grew to be seen as the best in the world) set the fashions that had critics in a pig’s blood-dotted froth. But Manchester never succumbed to those Scandi charms. Too busy chomping on decidedly more low-brow burgers, we ignored the pine sap and the juniper accents of Rök, Dabbous and the like. In fact, this was around the time Kro ambitiously tried to expand and it just didn’t take. Scandi scran wasn’t for us.

Fast-forward a couple of years and along comes hygge and lagom and all the rest of it and now it seems the inevitable has happened: a little bit of Scandiwegia has made its way to Manchester and I know you will fall off your Ikea Henriksdal when I tell you it’s landed in Chorlton.

Velbekomme, which means both ‘welcome’ and ‘bon appetit’ in Danish, bills itself as the more inclusive ‘Scandinavian’ eatery but is mainly in the manner of a traditional Danish café, with some Swedish and Norwegian accents. Currently only open in the daytime, it serves mainly Smørrebrød (open-faced sandwiches, £5.50, pictured below). This means a slice of rye bread (and only rye bread) with various toppings alongside salads and a soup of the day. This is not high-falutin Michelin-baiting style but a down-to-earth lunch spot as you will find dotted around the streets of Copenhagen and beyond. It’s simple and light inside, its Scandi heritage manifesting itself in the flags of the Nordic countries and a window decoration of a polar bear named Olaf. 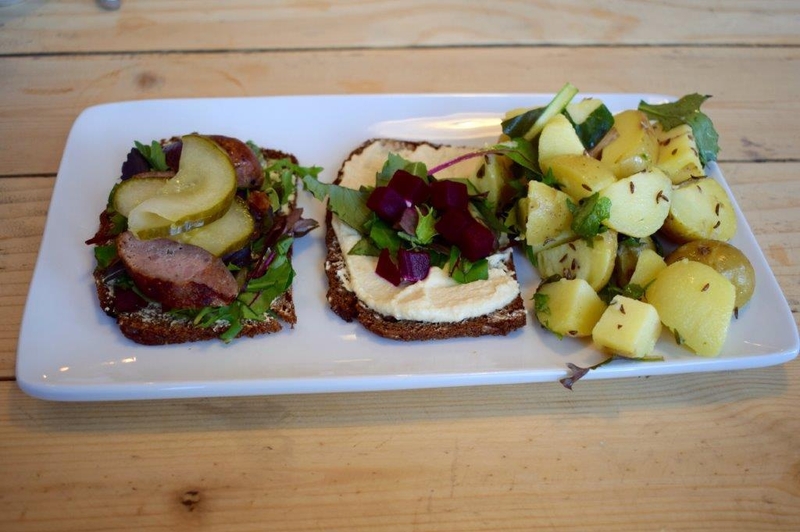 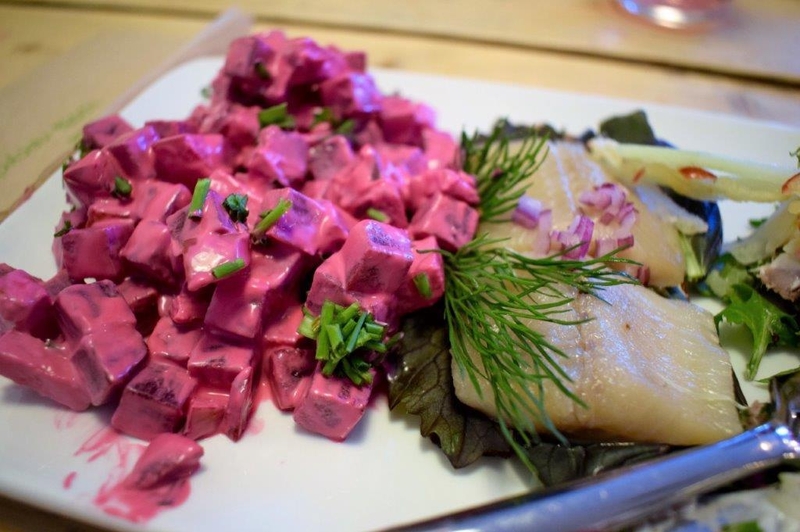 Velbekomme’s restricted menu but plentiful Wi-Fi means it is popular with people who need to lounge around with their Macbook open for the price of a cup of coffee (£2.30), or those who at some point in their lives have spent a month or three embracing the Nordic Model (or just embracing a Nordic model, both have excellent reputations worldwide) and are now hoping to recapture their Scandinavian bliss, even if that means eating caviar from a tube.

As for me, I took my mother. As a part-time Swede I thought she could assess the authenticity or otherwise of Velbekomme. She established her credentials once and for all when she looked at the menu and whispered in a horrified voice ‘but...where…are… the meatballs?’ Don’t worry Mum, I spoke to the owner and he assured me that once the kitchen was into its groove they will be supplying both meatballs and hot dogs. It actually amazes me that Swedish people are considered such a healthy bunch when they seem to be so addicted to sweeties, coffee, cake and reconstituted meat products of uncertain origin.

Perhaps that’s because these little vices aside, the Scandinavian diet is actually pretty virtuous. Take that rye bread open sandwich. I had one topped with picked herring, firm of flesh and sour-but-sweet, pairing beautifully with an earthy beetroot and apple salad. There was the standard hummus and avocado, a sausage and pickle and a top-notch potato salad flecked with caraway seeds. My favourite topping was the rich, flaky smoked haddock with shards of perfumed fennel.

But I fear herring and caraway are not for everyone. Then again, herring and mackerel are pretty tame compared to some of these classic Danish toppings: rolled headcheese, herring with raw egg yolk, beef tartare or smoked eel with scrambled egg.

Still we were ready for more as we made our way through Scandi-style waffles with cream and berries (£3.50), and a slice of Danish layer cake (£3), which takes all the key principles of trifle and reverse them: light layers of Genoise sponge capture wobbly layers of custard and raspberry jam. Heavenly. 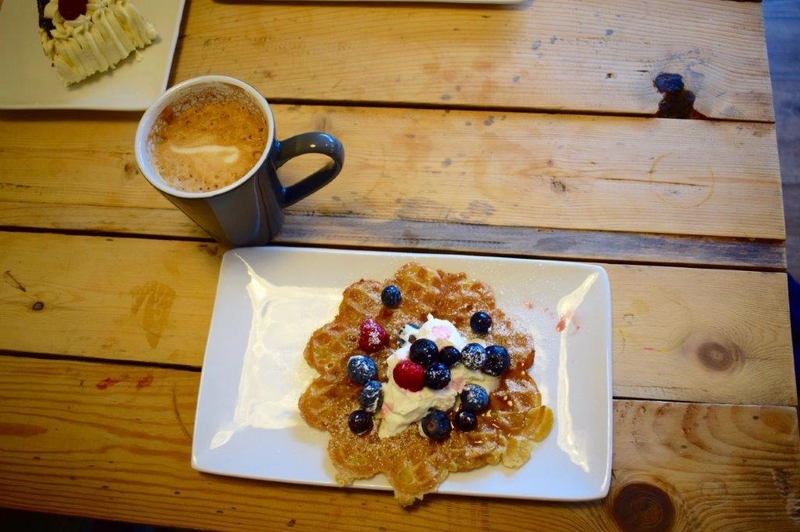 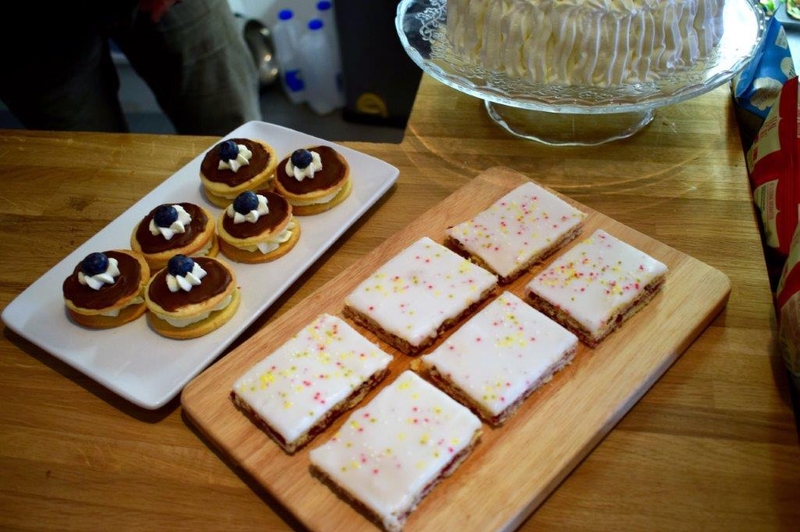 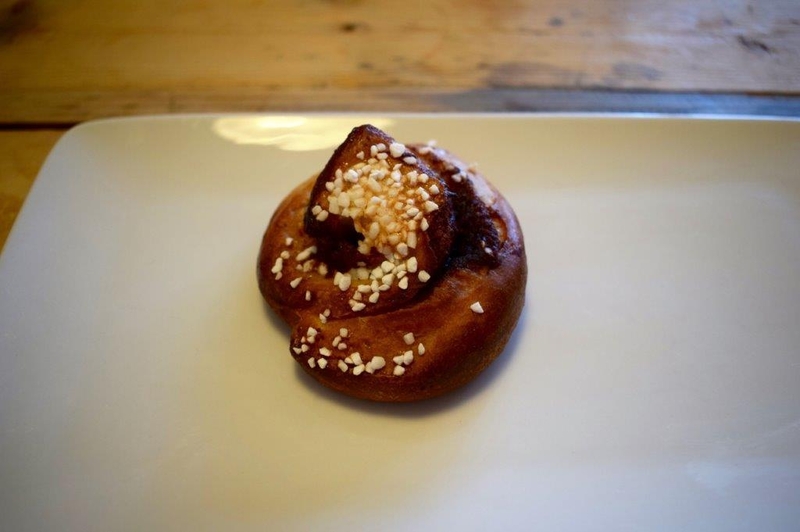 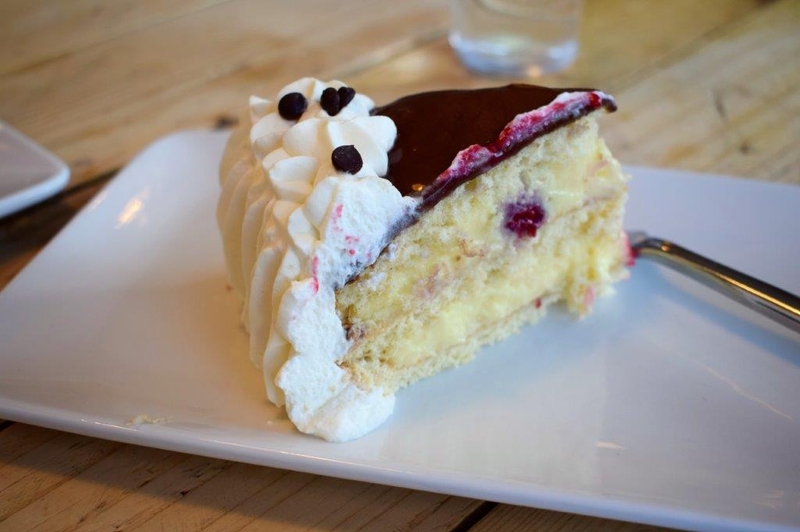 The wonderful thing about the Scandinavian languages is that they can make anything sound comical and mysterious at the same time. Take ‘hindbaersbitte’, which sounds like the name of a creature from Lord of the Rings (“beware the hindbaersbitte, Frodo!”) but in actual fact means raspberry bites. These wonderfully simple snacks are layers of pastry, jam, icing and rainbow sprinkles and taste like the best pudding ever bunged your way by the school dinner lady.

Perhaps my only disappointment was the Swedish kanelbullar (‘ware the kanelbullar!), or cinnamon bun. Did you know the Swedes revere this baked treat so much they actually have a Cinnamon Bun Day on 4 October? I managed to get hold of the last one of the day’s baking, which sadly put me in mind of the poo emoji (mind you, that is my favourite emoji). These buns are meant to be springy and yeasty, while this poor little emoji seemed a little flat. Still, it had all the fantastic cinnamon and cardamom flavours, warm spices that scent every Scandinavian kitchen and go so well with a decent cup of coffee.

While I enjoyed what Velbekomme had to offer and do agree that it is a fantastic little café, I did manage to sample practically its entire menu in one sitting. As I enjoyed pretty much everything that’s not so much of a problem, but if pickled fish on rye ain’t your bag the your options will be too severely reduced. The streamlined menu might just be taking Scandinavian minimalism just a bit too far. For once I agree with my mum: bring on the meatballs.