What do Homer Simpson, boy racers in car parks and traditional British seaside resorts all have in common? Come on, you’ve read the title of this article, it’s doughnuts, silly. Manchester is jam-packed full of them these days. You can’t move without one hitting you in the face.

Like most delicious baked goods, everyone wants to say they invented doughnuts. My nan, your nan, English cookbooks from 1803 and a 16-year-old American sailor called Hanson Gregory (what have you done with your life, eh?) all claim to have invented the humble doughnut but the ‘nut world doesn’t live in the past, it moves forward. Doughnuts, or donuts if you’re American, have been given a glow-up with new flavours, new textures, and fillings that don’t squirt down your shirt when you bite in.

Putting such a list together hasn’t been easy. The research has been gruelling. Icing blindness, intense sugar rushes, mood swings and dramatic shaking are just a few of the things we’ve put ourselves through. But we’ve come out the other side in a higher state of consciousness with a list of the best doughnuts the city of Manchester has to offer. 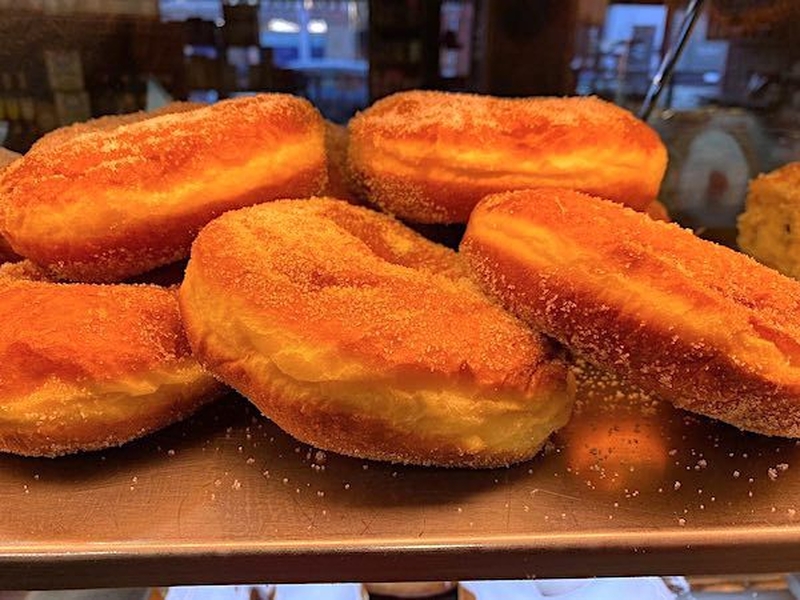 While we love amped-up, social media-prettified doughnuts, we also have a soft spot for an old-school jammy ‘nut. Barbakan Deli in Chorlton has been producing Polish loaves and pastries for nearly 60 years so it’s had plenty of time to perfect its sugar-drenched rings and special pączki, traditional polish doughnuts stuffed with almost too much raspberry filling. Enjoy in the outside seating area with a coffee and a strategic heap of paper napkins as you watch Chorlton go by 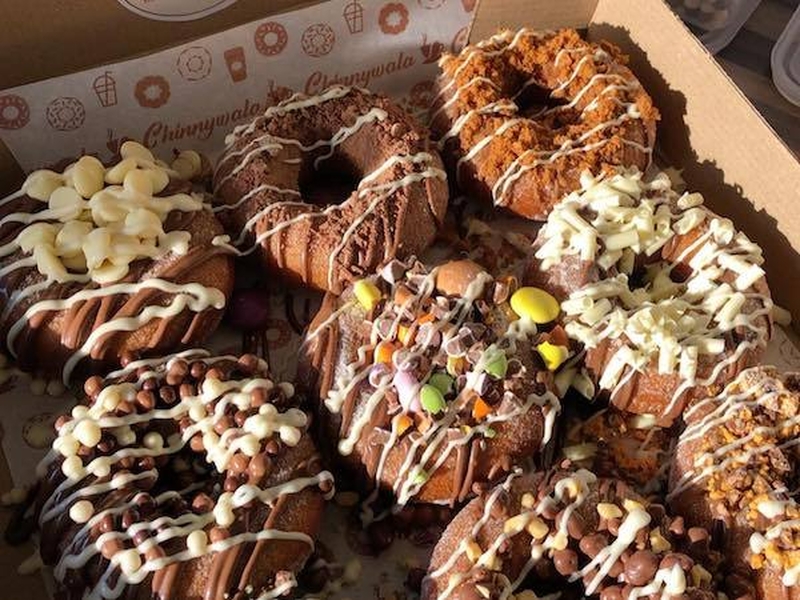 There’s a place for all doughnut kinds in Manchester and Longsight new kid Chinnywala does the sort of doughnuts that bring to mind the freak shakes of yesteryear. We’re talking very stacked, substantially-topped doughnuts. Sprinkles upon sprinkles - upon sprinkles. Unlike a lot of other independents, however, there's a level of customisation. All doughnuts are served with sugar and chocolate sauce with a choice of sauces and toppings that range from bubblegum and strawberry to popping candy and Aero mint. 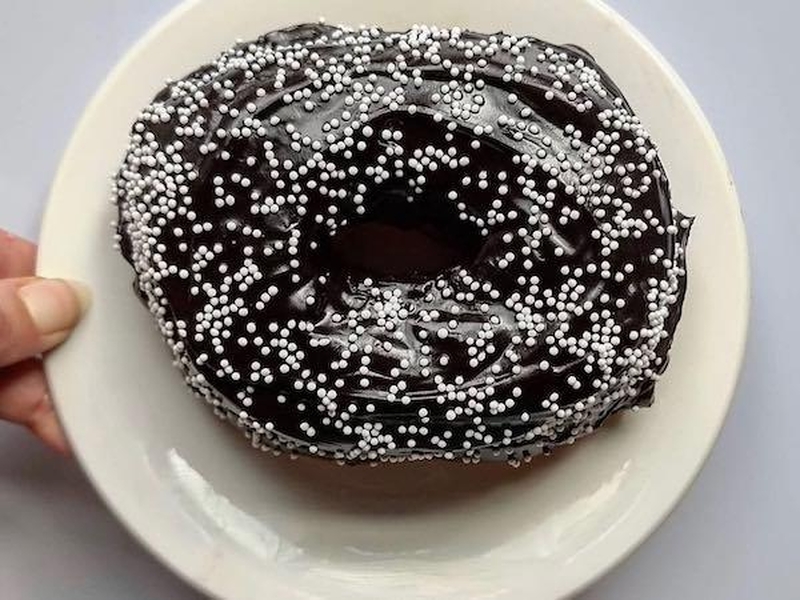 Northern Quarter-based kitchen baking operation D G H N T brings a serious conundrum: are these doughnuts just too aesthetically pleasing to eat? Do we want to touch the delicate pieces of citrus on top of the doughnuts in the limited-edition Middle Eastern box, for instance? Or do we just want to stare at them forever and imagine how good they taste? Can you be hypnotised by the beauty of a doughnut?

Snap out of it. No doughnut is too beautiful to eat. With orders available direct through Instagram and pop-ups at Corner Slice and Mackie Mayor for picking up a few in person, recent flavours on the menu (updated weekly) have included raspberry pistachio cheesecake and lemon poppy seed. 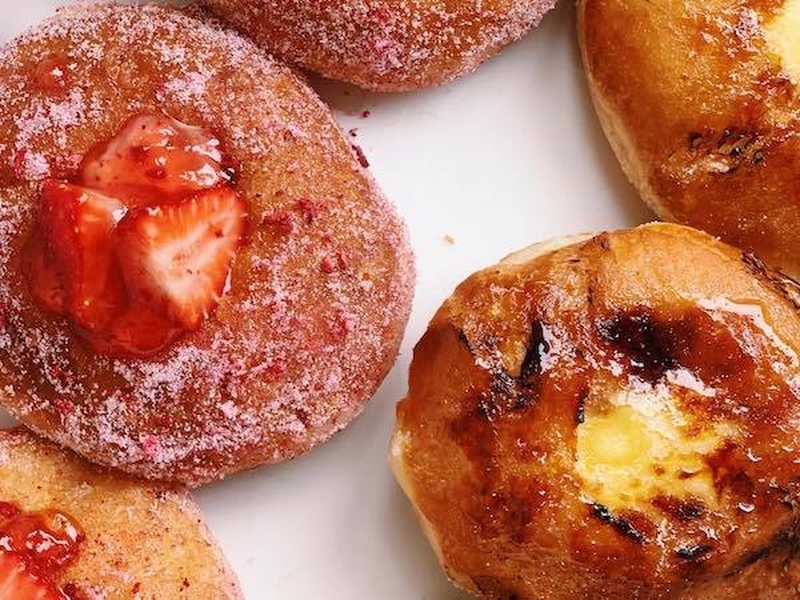 Based in Salford, Freda’s Place is the passion project of Manchester pastry chef Caitlin Freda who set the business up whilst on furlough. She makes among other things, extremely picturesque brioche doughnuts with oozing centres, think salted caramel custard or strawberries and cream. There are also inventive options like a s’more doughnut inspired by the American summer camp snack and a marshmallow glazed doughnut topped with charred marshmallows. Freda’s Place is limited to pop-ups and custom orders so keep an eye on its Instagram for updates. 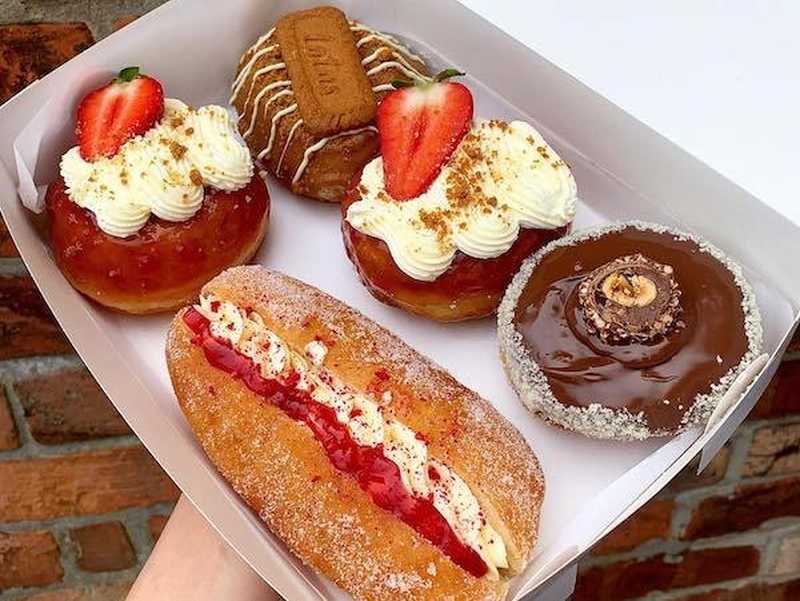 To truly embrace the doughnut life you need to come with an open mind and an open heart to whatever the doughnut life gives you. You need to reconfigure your mental interpretation of the concept of what a doughnut is. Long story short, not only does Glazed do sourdough doughnuts (a Manchester first), with natural yeast and a dough that’s left for 20 hours to produce light and fluffy doughnuts, but it's also straying from the circular status quo. Yes, Glazed deals in brioche finger doughnuts too.

There’s a hidden advantage to sourdough doughnuts - they’re easier to digest. Thus, technically, you can fit a few more in without feeling ill. Brioche is usually reserved for the classics (vanilla custard, strawberry jam and chocolate cream), whilst sourdough is used for something a bit more adventurous (salted caramel, cherry Bakewell, lemon meringue). 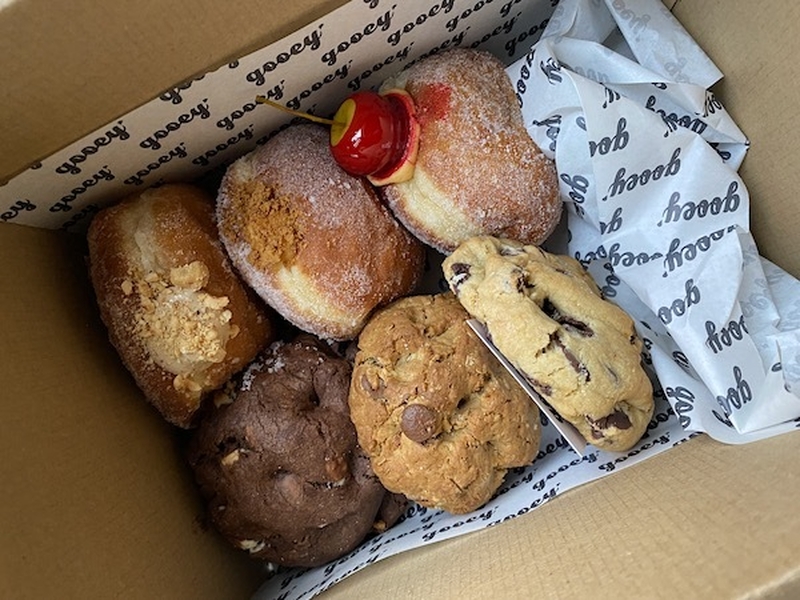 The little glass box that Gooey sits in at the entrance to Ducie Street Warehouse (there's one at Hatch on Oxford Road now too) always reminds us of the box offices at American cinemas. A doughnut at Gooey isn’t entry for one, it’s more like a one-way ticket to tasty town. Gooey by name, gooey by nature. 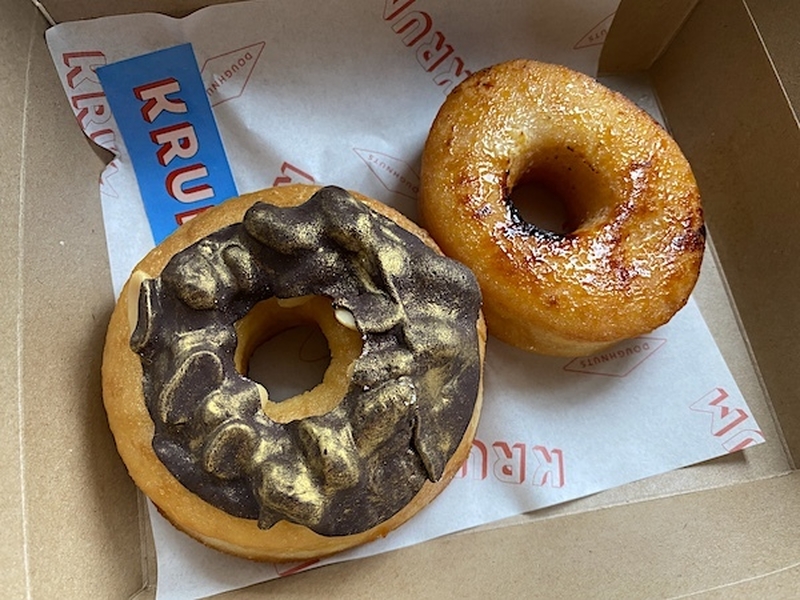 If you’re yet to be convinced by the wonders of anything labelled 100% plant-based, the doughnut sphere might be a place to change your mind. Krum is flying the vegan doughnut flag with a head baker who earned her candy stripes at Fauchon in Paris. It always seems to be doing something especially interesting whether that’s teaming up with Bundobust on a limited-edition Mango Bhai doughnut (brioche dough, mango and vanilla compote, vanilla compote, vanilla caramel, gold-dusted chocolate popcorn and candied fennel seeds) or conjuring up its opulent triple gold - a doughnut with its own crown. Krum has been on somewhat of a hiatus of late, having previously been stationed at Freight Island but a little firebird told us it's on the hunt for a permanent, bricks n mortar premises where it will not only bake vegan doughnuts but a whole range of plant-based patisserie. Holler if you know the perfect new plant-base for Krum. 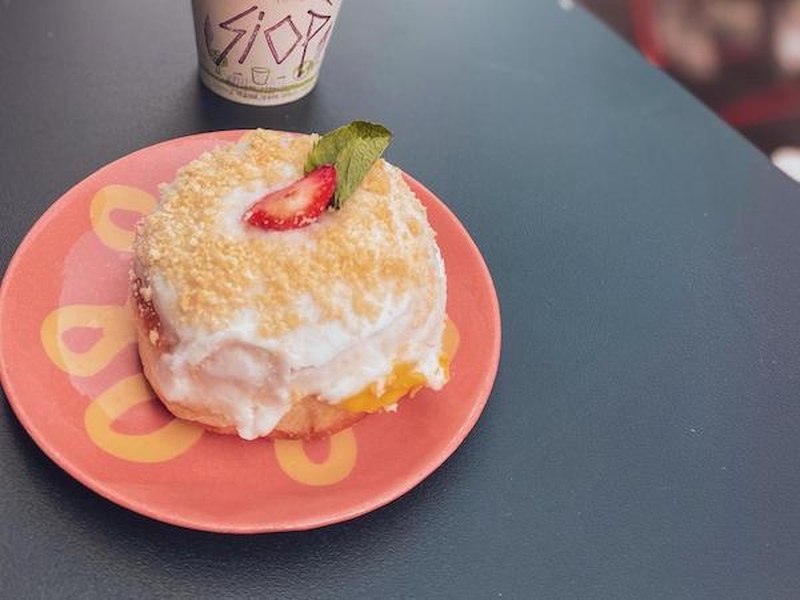 Tib Street’s brightly coloured pastry palace Siop Shop is a good spot for giving a doughnut a good seeing to - with the added bonus of indoor and outdoor seating. Siop’s ‘nuts are a more bready example of the genre compared to its brioche-orientated comrades and where others go with a more dazzle camouflage approach to toppings and aesthetics, Siop keeps it colourful and refined.

The permanent menu includes classic glaze, vanilla custard and raspberry jam, but weekly specials have included a strawberry and mint filled number and a maple and blueberry-glazed ring. The open-plan kitchen behind the till also means you can chomp and chef watch which is always fun. 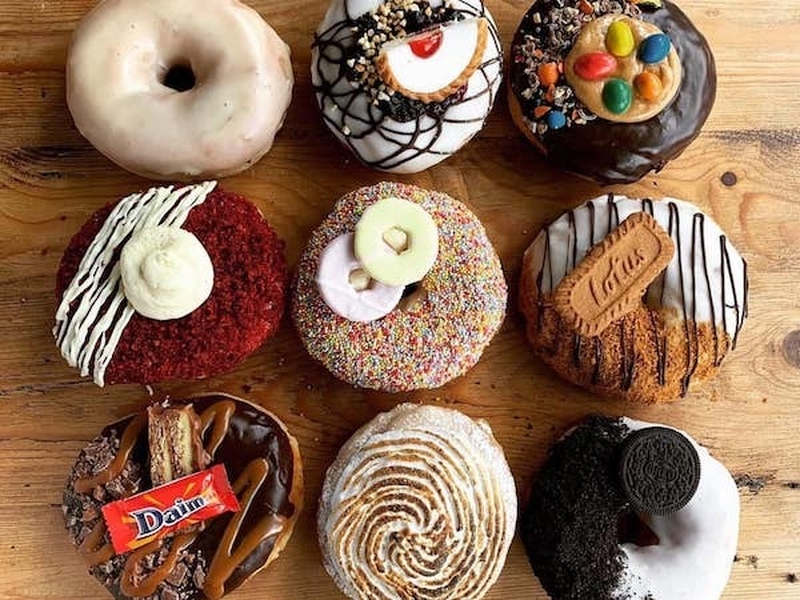 If sweets and biscuits on doughnuts are your thing, consider Suburban Donut, a big fan of putting everything from Oreos to Daim bars on top of doughnuts. Available in classic American topped ring format or brioche filled, they’re available for delivery in and around Manchester from Suburban's Sale bakery. Bestseller, the Cherry Bakewell, packs almond icing, dark chocolate and Morello cherry jam with a cherry Bakewell pie propped on top for good measure. 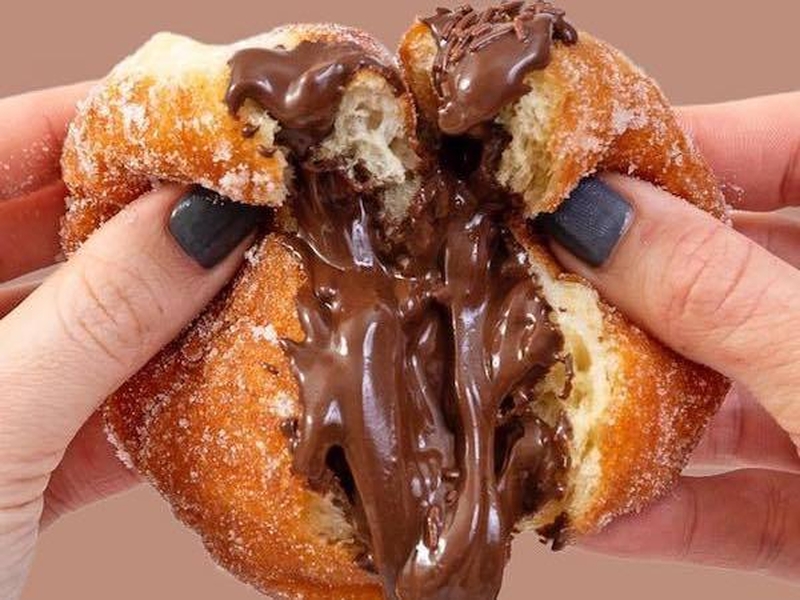 A relative newbie on the Manchester doughnut scene, Sweet Baige was born out of a lockdown baking passion project in May 2020 that quickly took off as a small bakery selling bespoke cakes, cookies and doughnuts. The doughnuts in question are of the fluffy brioche variety and are available to order in small batches on select weekends. Flavours include Biscoff, Nutella and Kinder, with delivery options and pickup available. They sell out pretty quickly so ordering early is advised. 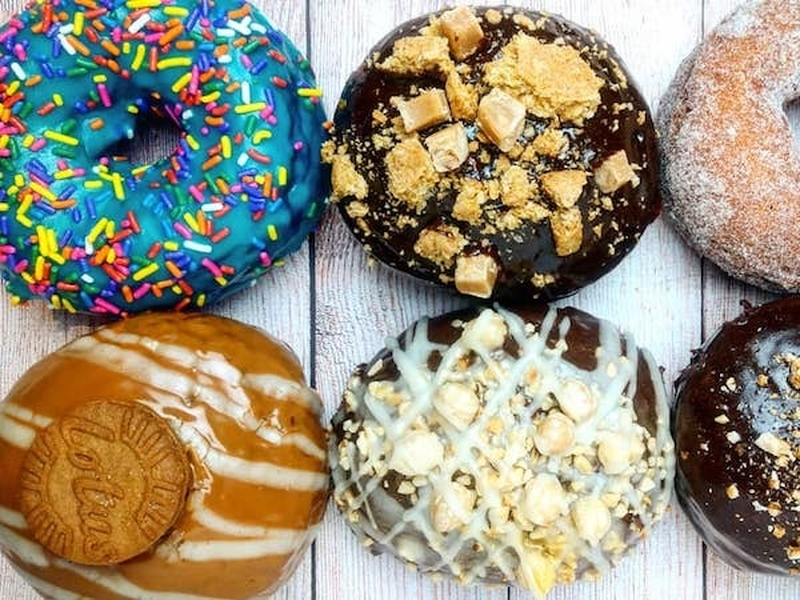 Teatime Collective might be best known for its impressive bespoke vegan cakes but it also does a nice line in vegan doughnuts. Not one to discriminate between glazed rings and filled centres, the vegan doughnut offering is another on the more spectacular side with vibrant bubblegum colours and indulgent toppings. Teatime Collective's black forest gateau separates it from the pack, as does the jammy dodger doughnut. There's also an off-menu doughnut cake, the ultimate birthday treat for aficionados. 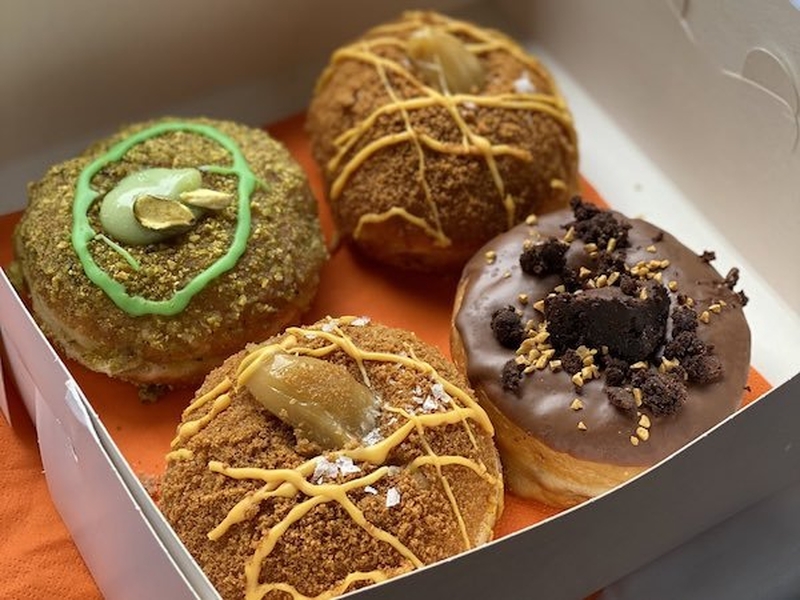 The best bloody burgers in town? The Butcher opens in the Arndale
What you say
Read Next
● / News