APPARENTLY, fashionable tight-fitting jeans can cause long-term health consequences, according to warnings from medical experts.

A study conducted by TENA Men has concluded that: “The uber-cool skinny denims, favoured by celebs such as Russell Brand, Jude Law and Joey Essex can increase the risk of urinary tract infections and in some agonising cases, men can even suffer with twisted testicles.”

“I decided to finally ditch the jeans after I split a seam on the tube after bending down to pick up my Oyster card.”

But before you write-off the research as fruitless gobbledygook – and to be honest I’m more concerned at the revelation that Joey Essex is classified as a patron of 'uber-cool' clothing than I am the welfare of my genitalia – take a look at the findings.

TENA, the people who make bladder weakness products, conducted a study of 2,000 British men and found one in ten have experienced an unpleasant side-effect as a result of wearing skinny jeans – and one in five have suffered the dreaded twisted testicle.

We had to double-check the date when this turned up in Confidential’s inbox, but this is no April fool, there’s real quotes and everything.

Dr Hilary Jones, TENA Brand Ambassador and campaign spokesperson, said: “Wearing tight-fitting clothing over a prolonged period of time can lead to urinary tract infections leading to over-activity of the bladder as well as a low sperm count and fungal infections.

“I have seen several cases of men who have twisted their testicles due to wearing jeans that are far too tight.”

Dr Jones advises that you make sure you leave plenty of room around the groin area, and that your pants and trousers feel comfortable, so you’re not being restricted in any way.

But that’s not all. Tight-fitting jeans around the groin area can put additional pressure on the bladder, and can lead to bacteria breeding and re-entering the body causing urinary tract infections; which means if you insist on wearing your denim tight, you’ll end up needing to pee more often than your granddad.

TENA found that of those men “suffering from skinny jeans” (I don’t know why they didn't just go the whole hog and call it SJS (skinny jeans syndrome), half had experienced groin discomfort, over a quarter had bladder troubles, and one in five suffered the dreaded twisted testicle.

One in seven British men regularly wear skinny jeans, but more than a third confess they don’t actually know their correct jean size, whilst when it comes to picking jeans, just 7 per cent described softness and comfort as an important factor. 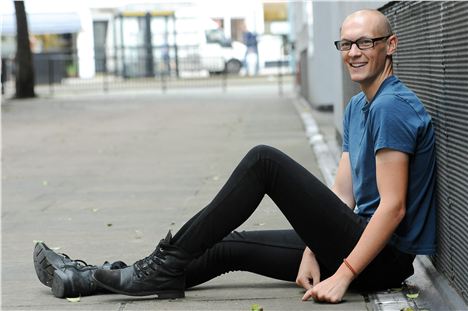 DANGER: Do not try this at home

Zoe Brimfield, TENA Men Brand Manager says: “With this survey we were keen to highlight that while men may like the look of tight-fitting jeans, it’s important that they are not compromising their health.

Wearing skinny or ill-fitting jeans can lead to bladder weakness as a longer-term consequence. Male bladder weakness is more common than people think, with 1 in 9 men in the UK currently experiencing some form of the condition.”

”I bought my pair of skinny jeans because they were fashionable”, he said.

“I’d recently moved to London where every street feels like a catwalk so I wanted to look good.

”My friends used to joke I looked like something out of the Wanted or One Direction but I didn’t take notice.

”At first I didn’t really have a problem and felt good wearing them but a couple of colleagues did comment on the fact they were skin tight and made my legs look ridiculously long.

”I then noticed they felt uncomfortable to wear, especially when sat down and put pressure against my bladder and stomach.

”I found myself going to the toilet more frequently than normal, which just became annoying.

”I didn’t bother going to the doctors or anything because it’s not something you want to admit – and it never occurred to me that it may have been caused by my skinny jeans.

”Since moving to London I cycle more and I decided to finally ditch the jeans after I split a seam on the tube after bending down to pick up my Oyster card.”

We feel your pain James.

So there you have it. You’ve been warned fellas. Don’t come crying to us when your testes have fallen off and your going to the loo fifteen times a day – we tried to tell you.

Still got those Adidas popper-pants at the bottom of your wardrobe? It’s time to dig them out, because we beg you, as Dr Jones does: “Please don’t put style before health.”